This historical marker was dedicated in 2007 by the Alabama Historical Association with the support of members of the Omega Psi Phi fraternity. The marker designates the location where a white mob firebombed a Greyhound bus on May 14, 1961. The mob attacked the passengers, centering their attacks on seven civil rights activists who came to be known as Freedom Riders. On May 4, 1961, the first group of Freedom Riders bought tickets and boarded a Greyhound bus headed for New Orleans. They did not reach their destination, however, and were met by an angry mob in Anniston who slashed a tire and followed the bus until it was forced to stop. As the bus parked on the side of the road to fix the tire, the mob set the bus on fire and attempted to block the doors to prevent any of the occupants from escaping. When the passengers finally escaped the burning bus, the mob beat the passengers, causing serious injuries. A secret arrangement between the police and the Ku Klux Klan had been made prior to the attack in which the police promised not to arrive on the scene for fifteen minutes. Only the arrival of the police and media prevented further violence. However, instead of ending the Freedom Ride as intended, hundreds of white and black activists joined Freedom Rides in communities throughout the South in the months that followed.

This historical marker was dedicated in 2007 by the Alabama Historical Association with the support of members of the Omega Psi Phi fraternity. 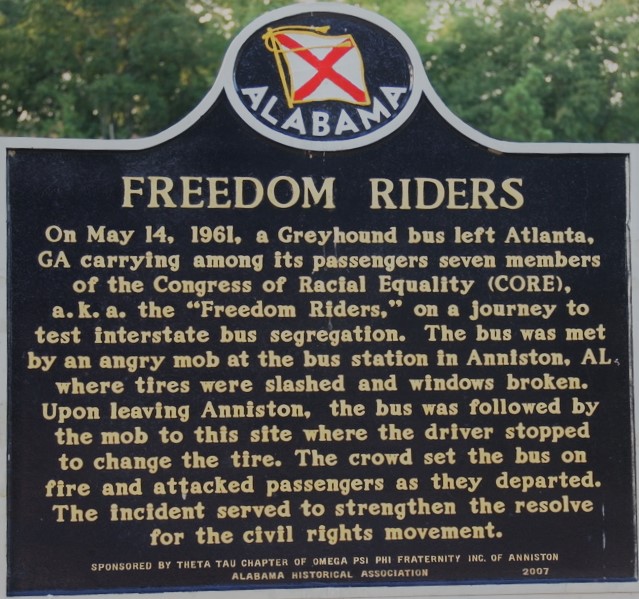 At this location in 1961, a mob set the bus on fire and attempted to prevent any of the occupants from escaping this inferno 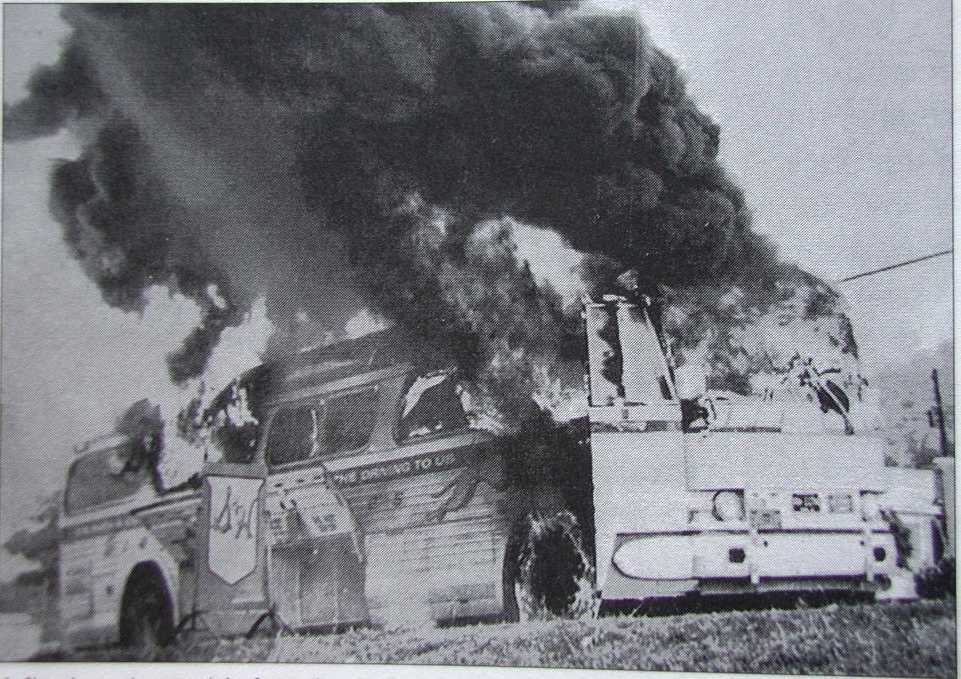 These activists were part of the Congress of Racial Equality (CORE) and they were testing the United States Supreme Court ruling which declared that public buses traveling across state lines were under the jurisdiction of the Department of Commerce. As a result, state laws permitting segregation were secondary to federal laws against racial discrimination, and anyone operating a bus or business that served interstate travelers must provide equal accommodations for all. Even though these laws made racial segregation illegal, Jim Crow persisted in nearly every Southern city. Recognizing that the federal government was doing nothing to enforce the law, these seven Freedom Riders were the vanguard of hundreds of white and black activists in the summer of 1961 who risked their lives to highlight this illegal behavior and test the willingness of local, state, and federal officials to follow or enforce laws barring racial discrimination.

The Freedom Riders began their journey on May 4, 1961, and hoped to successfully challenge segregation at bus stations throughout the South and safely reach their destination of New Orleans. However, they each knew that violence was likely and had taken courses in non-violence and made personal arrangements for their affairs should they be arrested or killed.

In Birmingham, the Police Commissioner and a police sergeant were conspiring with the Klu Klux Klan with plans to end the Freedom Ride in Alabama by intimidation or violence. A well-placed FBI informant later revealed a secret arrangement between the Klan and the police, the former receiving assurance that no police officers would intervene for the first fifteen minutes thereby giving the white supremacist mob an opportunity to commit acts of violence without fear of legal repercussions.

On May 14th as a white mob harassed the Freedom Riders, assailants slashed a bus tire. Many members of the mob then followed the bus, knowing it would have to eventually stop in order to change the tire. After the bus pulled over, and with the police maintaining their secret arrangement, the mob firebombed the bus and nearly burned the Freedom Riders and other passengers alive. The highway patrol only fired warning shots in the air which likely prevented further violence.