Parkersburg's Blue Star Memorial honors local veterans and was dedicated by West Virginia Garden Clubs in cooperation with Blennerhassett District and West Virginia Nursery/Landscape Association. The Blue Star Memorial program began during World War II and honors those who have served in wartime, while the Gold Star was created to designate those who lost loved ones during the war. This marker is accompanied by a small monument in the shape of a brick castle, a symbol of military engineers. The monument is adjacent to the West Virginia Army National Guard armory which is currently the home of the 1092nd Engineer Battalion. 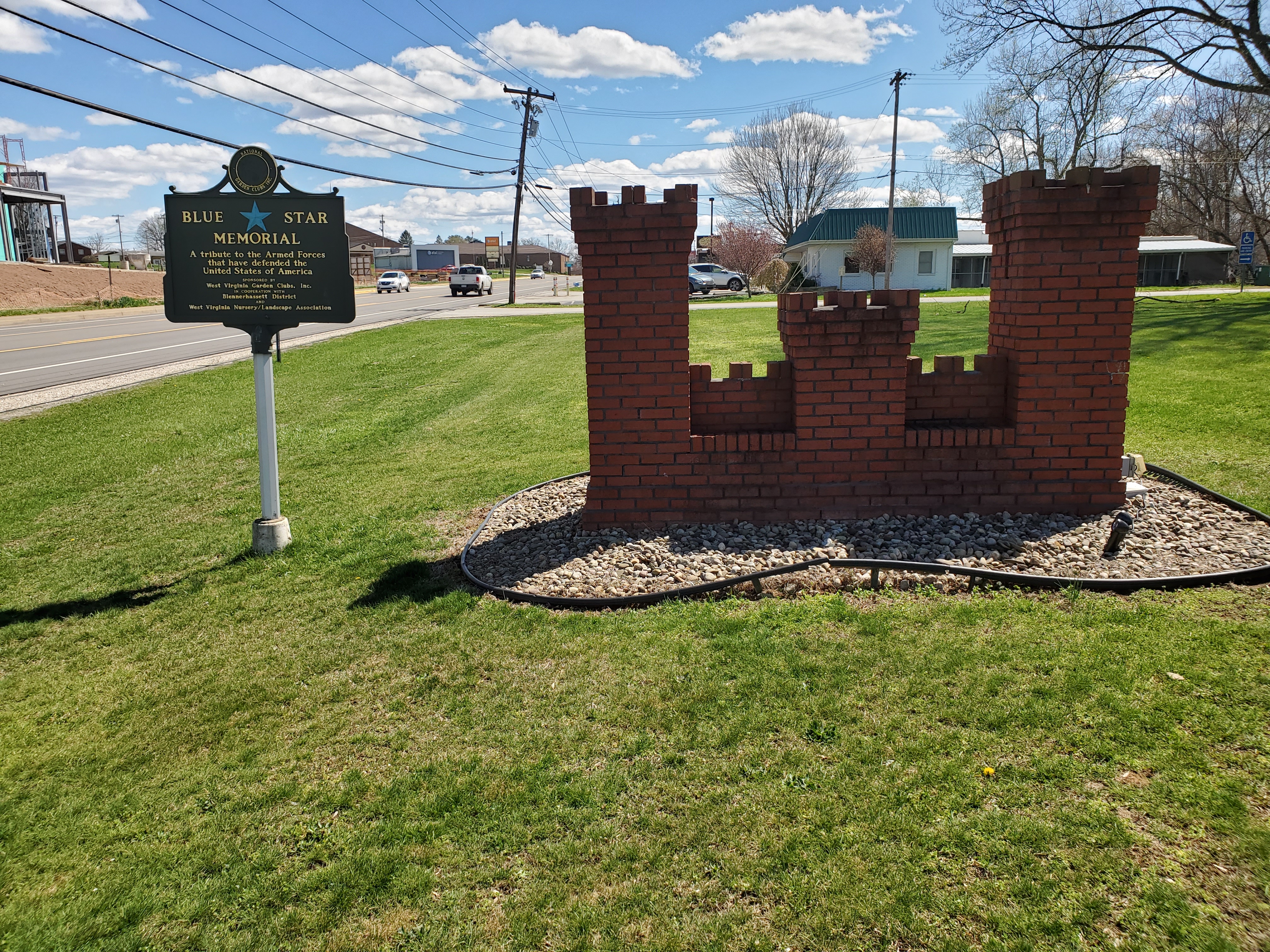 Close up of the Blue Star Memorial sign. Both sides of the marker are identical 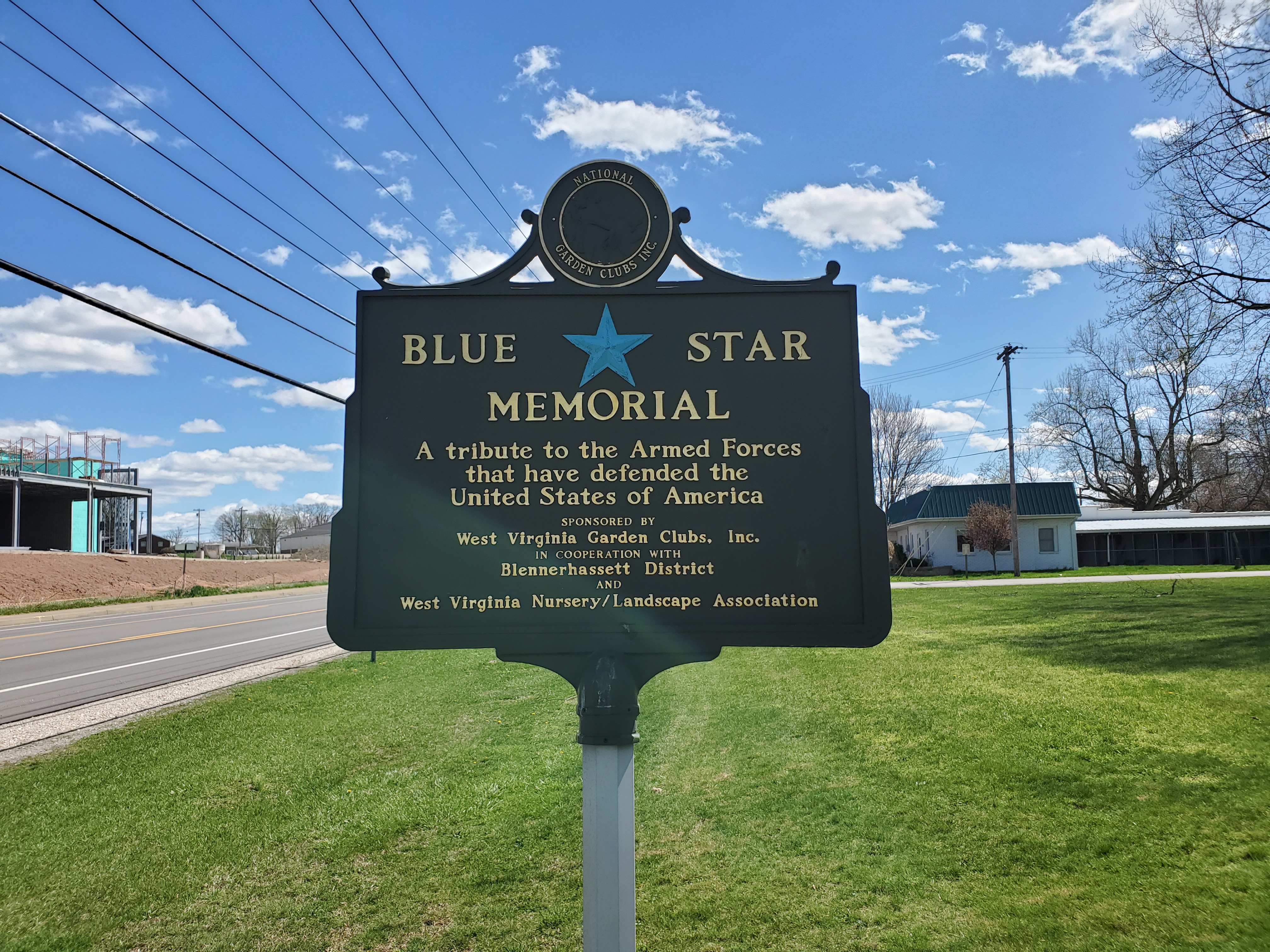 The Blue Star Memorial Program began in 1944 and grew from the tradition whereby families of servicemen where given a service flag to display in their windows. This program began with the New Jersey Council of State Garden Clubs planting 1,000 Dogwood trees along a five-mile stretch of highway as a living memorial. In 1945, the National Council of State Garden Clubs, now National Garden Clubs (NGC), took lead in creating the Blue Star Highway system.

Since that time, more than 3,000 memorial, highway, and by-way markers have been dedicated throughout all 50 states along highways, in national cemeteries, parks, gardens, and veteran’s facilities commemorate those who have or will serve in the United States armed forces. Today, this program honors all men and women who have served, not just WWII veterans.

The National Garden Clubs is a non-profit organization founded in 1929 with around 175,000 members. The organization has made a commitment to placing these Blue Star markers in honor of the nation’s Armed Forces throughout the country. For more than 75 years, they have been placing these markers in locations meant to remind the public of the sacrifices made by military and their families. “Each time a Blue Star Marker is dedicated," explained Mary Lousie Michie, the President of the organization from 1995 to 1997, "we show our love for this beautiful United States of America and our appreciation for the Armed Services of America."

The Blue Star designations were even extended to the VA’s National Cemetery Administration in 1996. On Vantage Point, Rosita Aristoff said, “These Blue Star Memorial Markers continuously pay tribute to the sacrifices made on our behalf by the brave members of our Armed Forces.”

Blue Star Markers across the nation are typically accompanied by a memorial garden of some sort whenever the placement of the marker is suitable. This monument in Parkersburg features the symbol of US Army Engineers, a castle, instead of a garden.

Sponsoring clubs for Blue Star markers host a dedication ceremony that mirror that of the nation’s first national ceremony which is best known for President Lincoln’s speech known today as the Gettysburg Address. Each ceremony includes a brief history of the Blue Star markers, an invocation and benediction, the unveiling of the marker, a color guard, and the playing of Taps.

The markers are uniform with the same size, shape, and appearance. For Blue Star Highway and Memorial Markers, the tribute line says, “A tribute to the Armed Forces who have defended the United States of America”. When erected, they are 7’6” tall. The size of the marker itself is 41” high by 45” wide with the inner plate being 30” by 42”. They are made from cast aluminum with raised relief lettering. The emblem is modeled relief and there is a prismatic star. The caption lines are 2” and the signature lines are 1”. Both sides are identical with a powder coating finish. The colors are polychrome shade green, gold leaf letter faces and emblem border rings, and the blue star. The highway markers for the program are smaller with the simple text "A tribute to the Armed Forces of America” cast into each one. These road markers are designed to be mounted onto wood or masonry. The highway markers are Blue Star only, but the Memorial and By-way Markers are for Blue or Gold Star families.

The Blue and Gold Stars themselves became an icon for military families during World War II. Flags and banners with the Blue Star would be seen on the homes of families with sons and daughters who were at war. The Gold Star was reserved for families who suffered the loss of a loved one being killed in action. This tradition has been maintained for nearly 75 years as a way to honor those who have served and their families.

Marker is always able to be viewed from the roadside