The Ricketts House, located at 2301 Washington Boulevard, is the finest residential work of prominent Huntington architect Levi Johnson Dean. Dean designed over one hundred buildings in Huntington, eastern Kentucky, and southern West Virginia, and was a master of several different architectural styles. Completed in 1925, the Ricketts House was built for John G. Ricketts, a landowner involved in the residential development of south Huntington. Ricketts’ home was designed as a hybrid of the Tudor Revival and Prairie architectural styles, with its false thatch roof but long, low form and stone walls. Four years after the house’s construction, Ricketts met financial ruin and the house was sold to Samuel Biggs, who lived there until 1946, when it was purchased by Dr. Francis A. Scott. Dr. Sarah Louise Cockrell Stevens and her husband purchased the Ricketts House in 1954 and had the residence added to the National Register of Historic Places in 1994. Although alterations have been made to the home by its various owners, its historic character has largely been preserved over time.

The Ricketts House, pictured in 1925 when it was completed 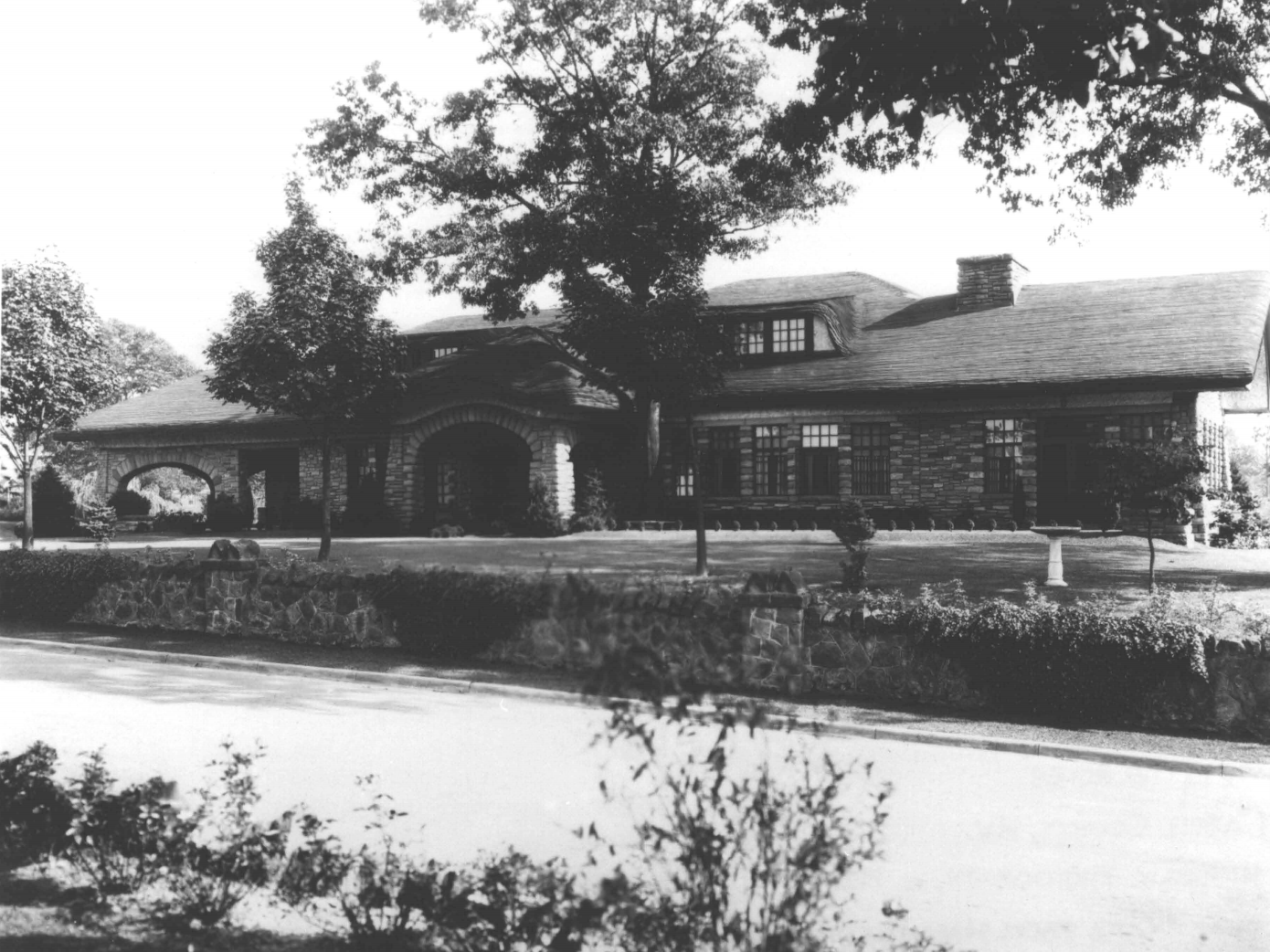 View of the house from Washington Blvd in 1925 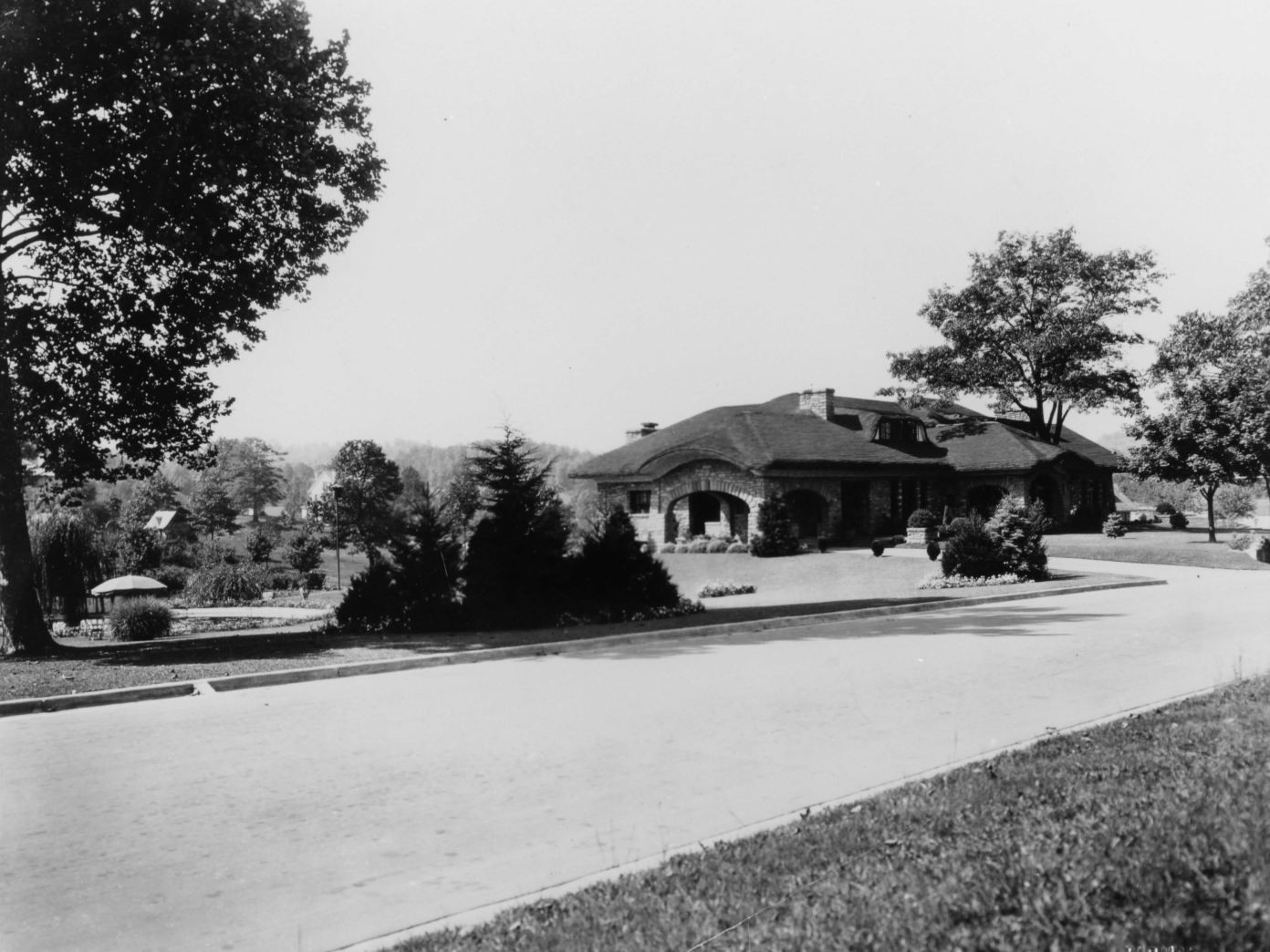 Northwest view of the house in 1925 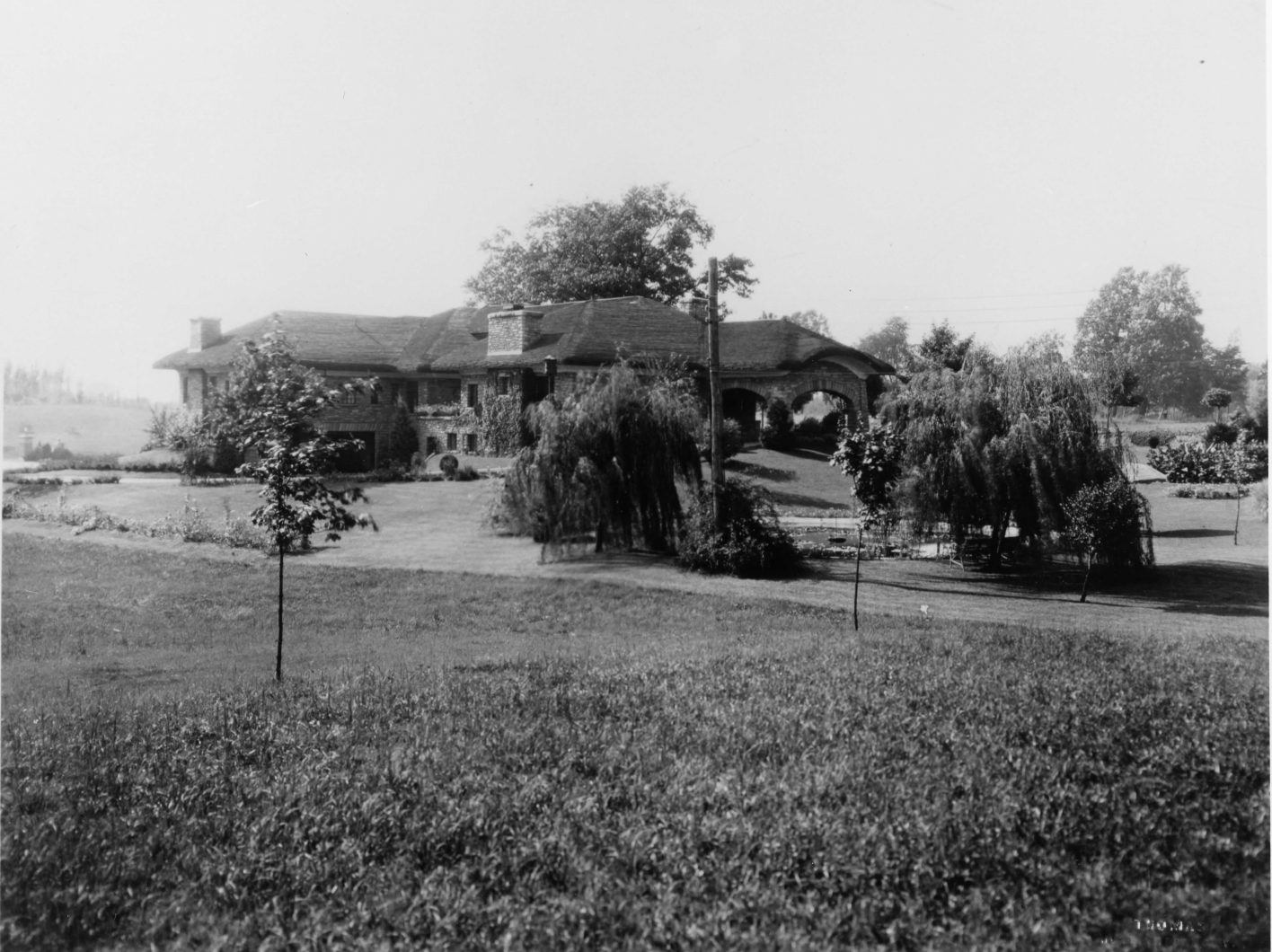 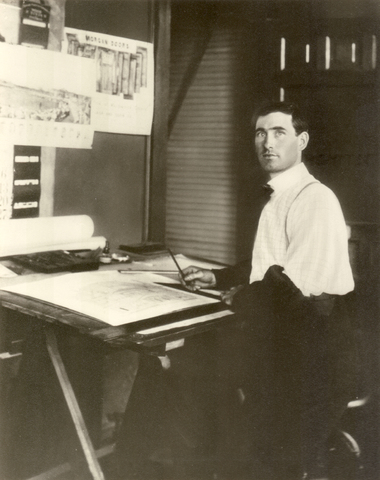 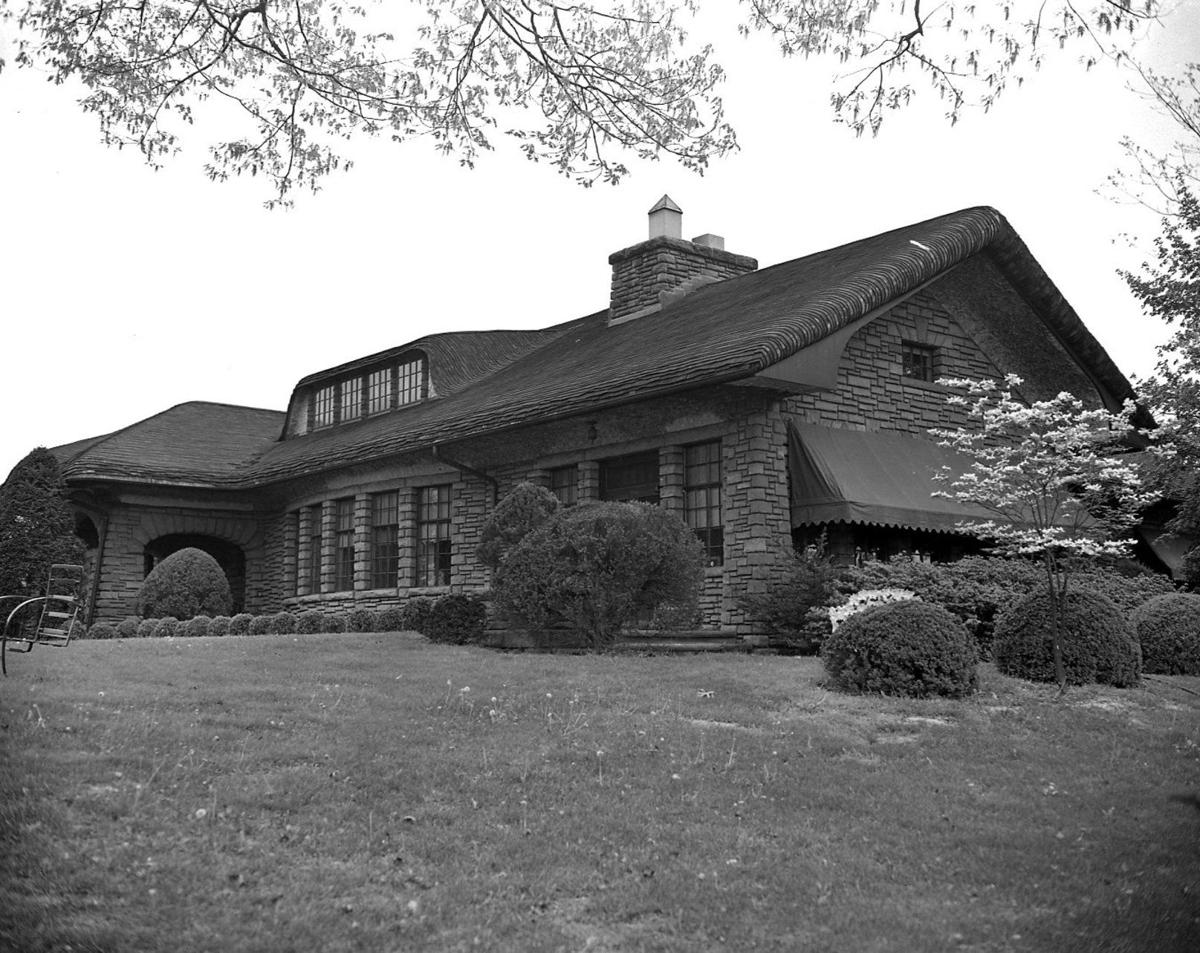 View of the house from the north 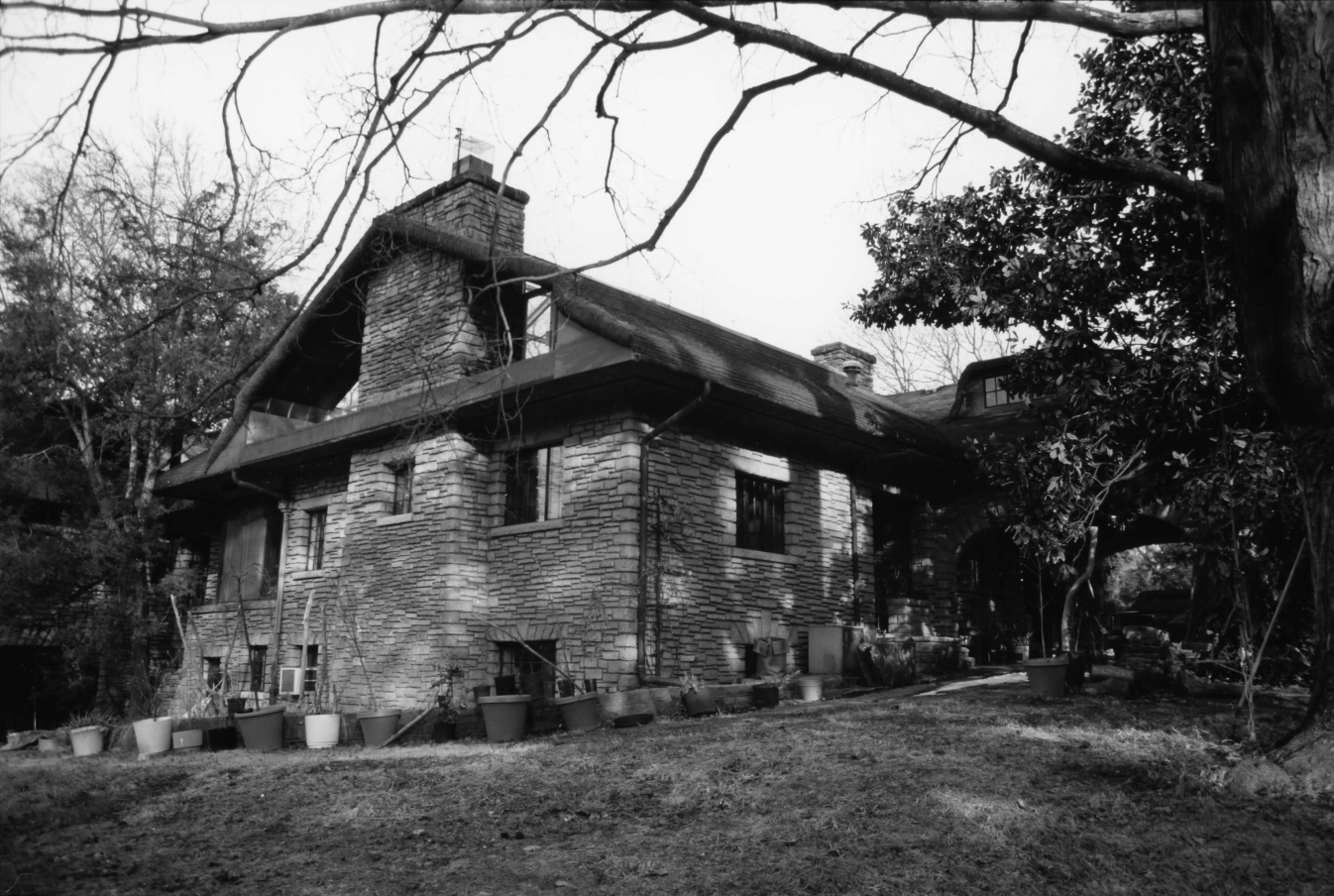 Close view of the sun room of the Ricketts House 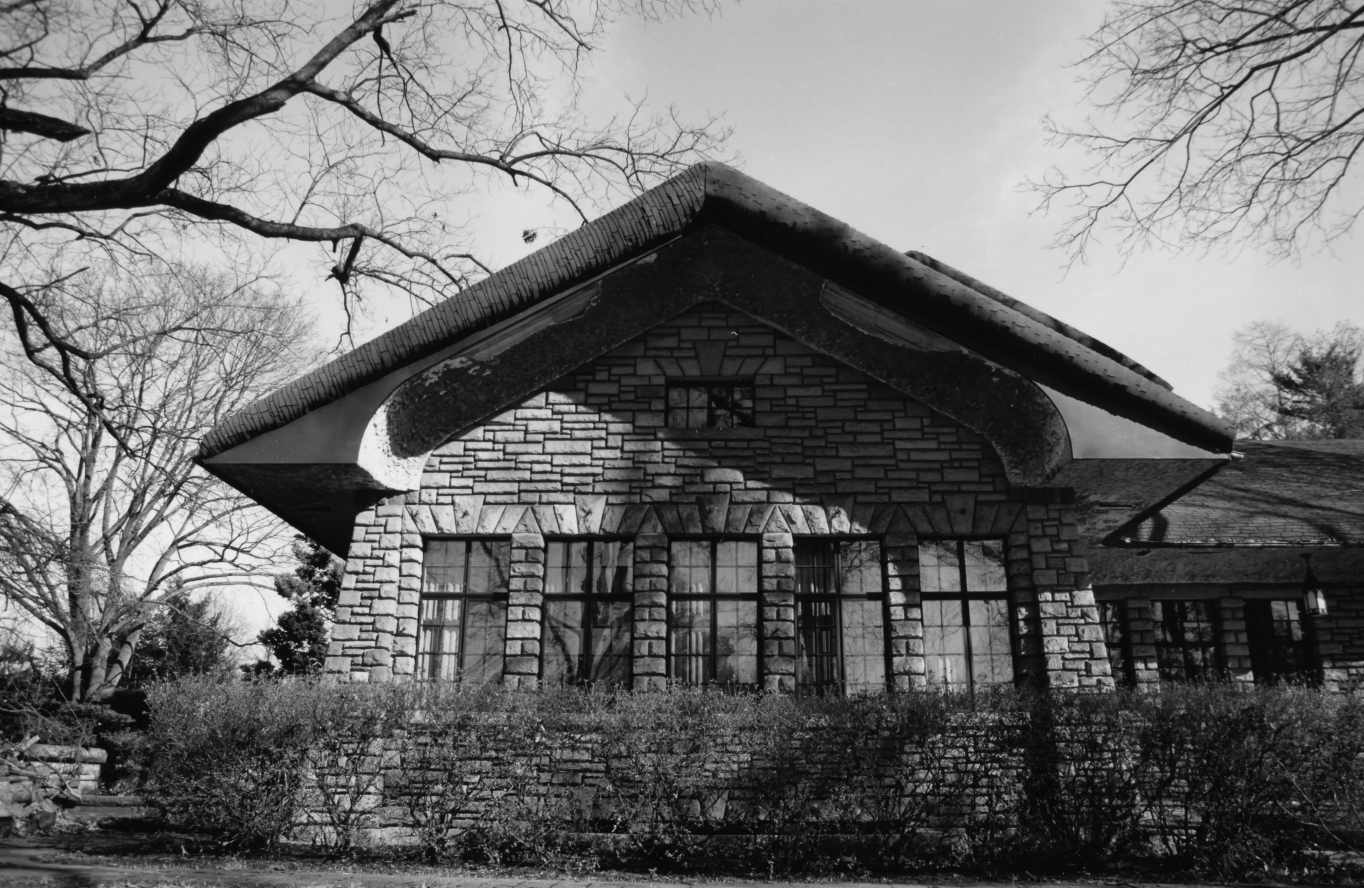 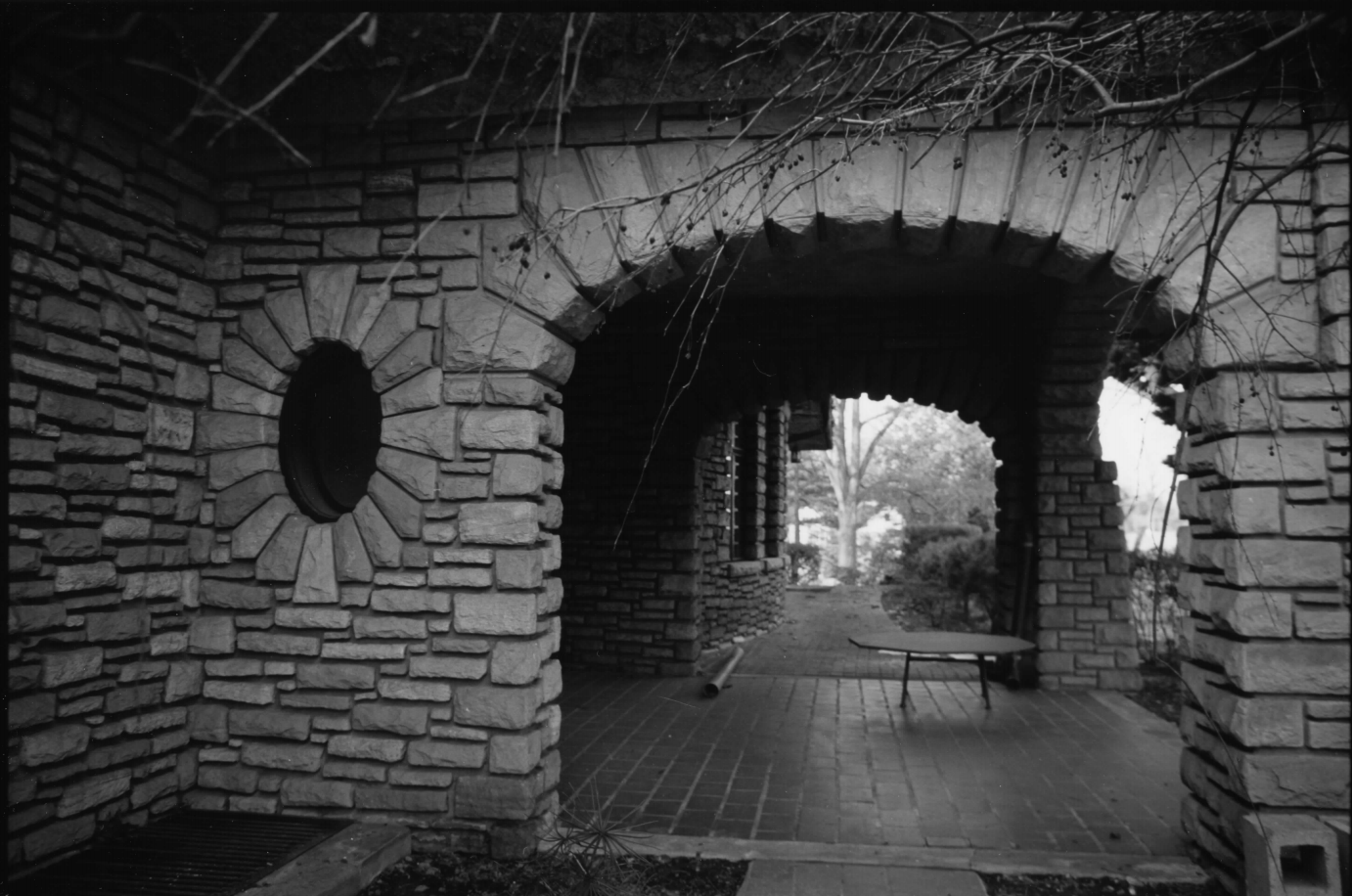 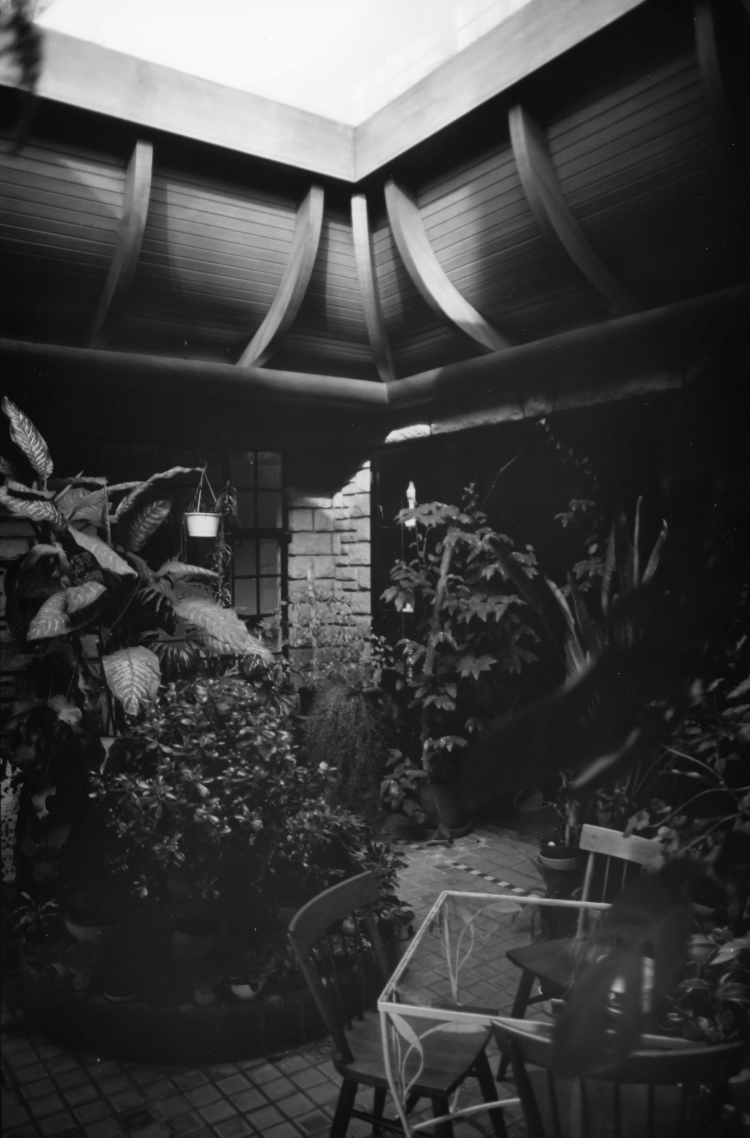 South side of the house, showing the playhouse built by the Biggs family 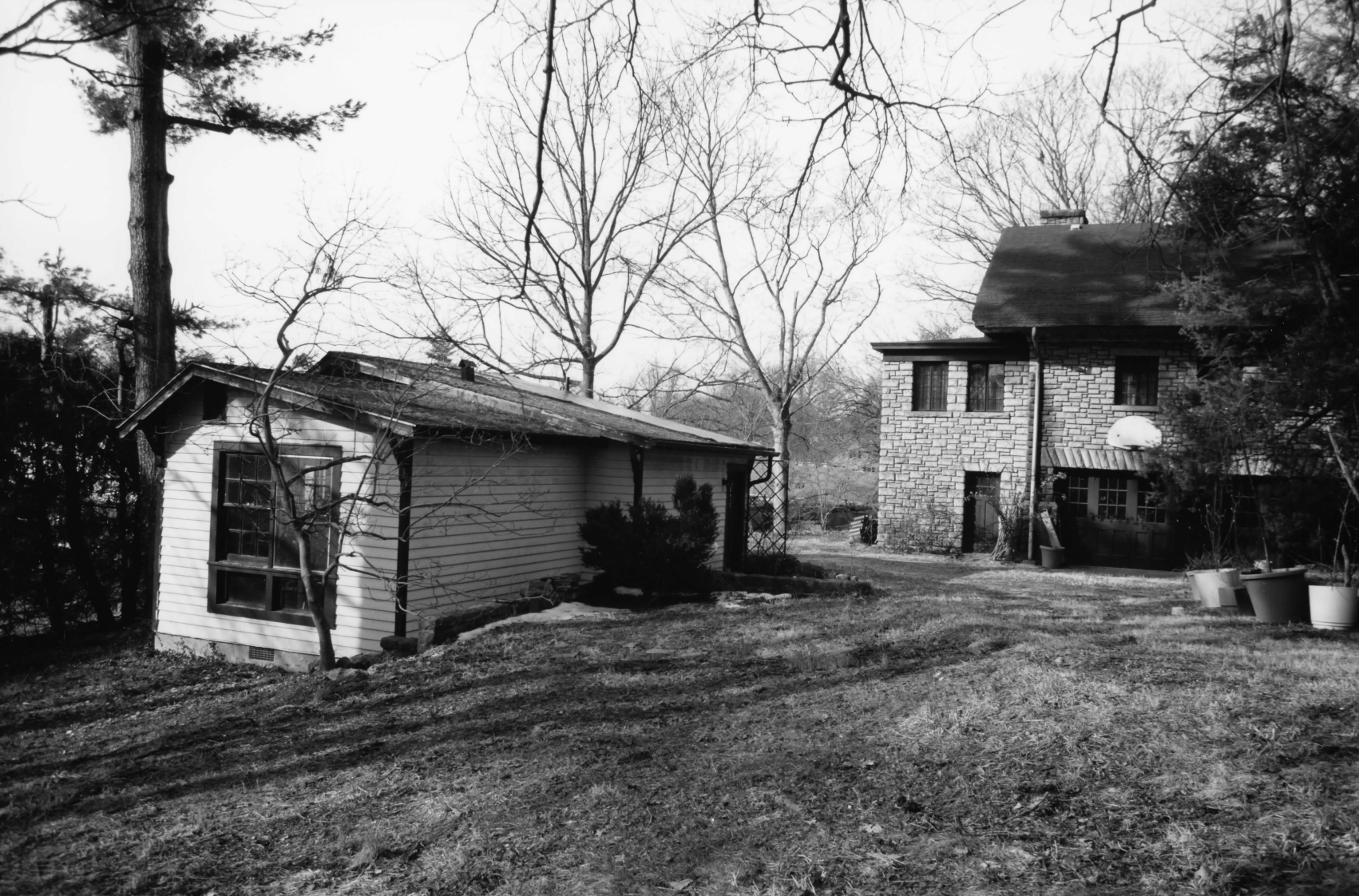 The Ricketts House, pictured in 2015 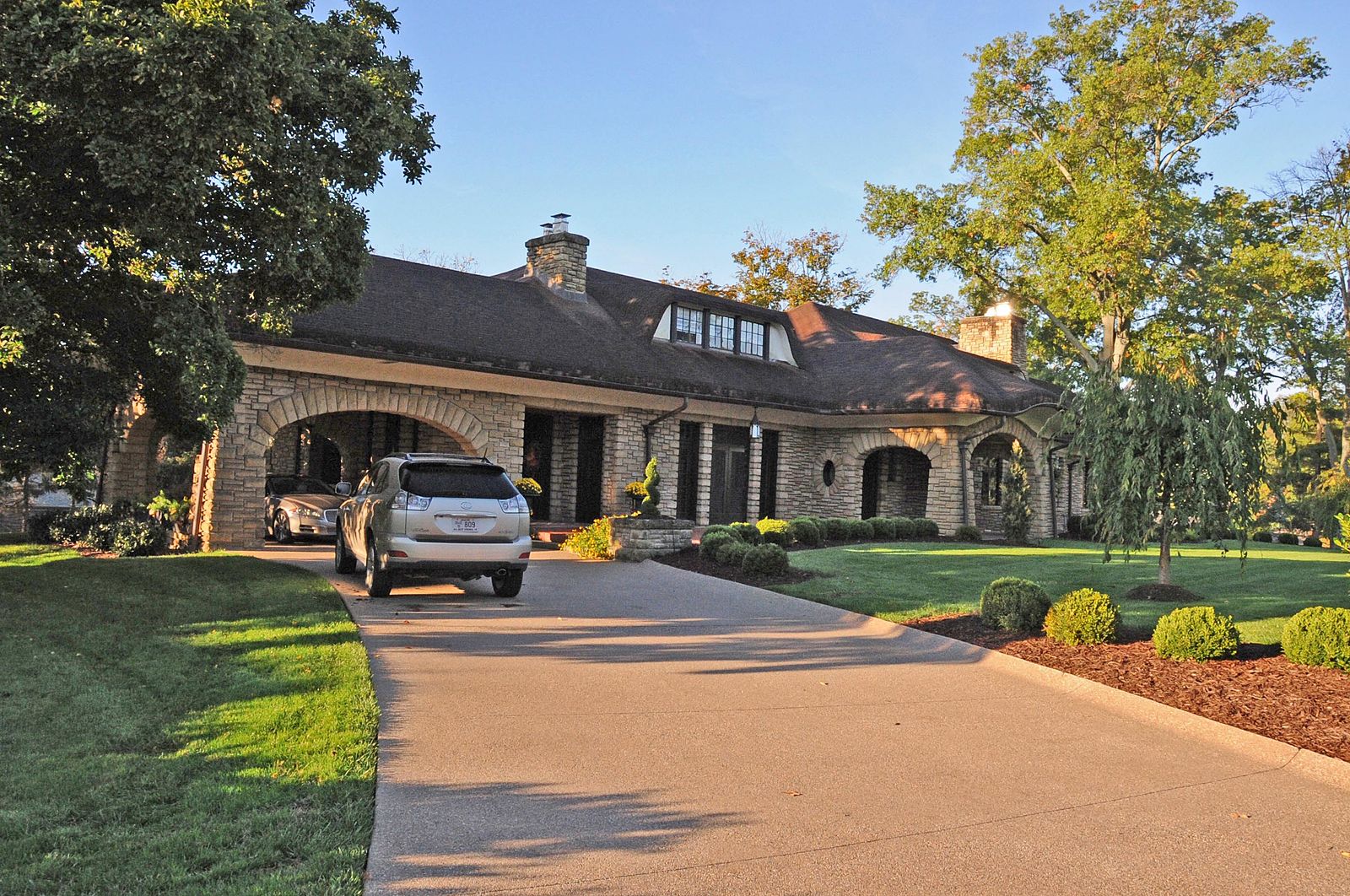 The Ricketts House is the largest residential work of prominent West Virginia architect Levi J. Dean. Born in Frametown, Braxton County, in 1878, Dean studied architecture through the International Correspondence School of Scranton, Pennsylvania before he began his professional career in Charleston. Dean moved to Huntington in 1906, where he established his own architectural practice by 1910. In 1921, Dean became the 19th architect to be licensed under the new West Virginia licensing law. By 1947, he had designed almost 150 buildings, including forty-seven schools, twenty churches, twenty-two residences, and sixteen apartment buildings. Among others, Dean designed the Jackson County Courthouse, the B’Nai Israel Synagogue in Huntington, and all of the stores for O.J. Morrison's, a major retailer in the state. Dean mastered many architectural styles that were popular at the time, including Gothic Revival, Art Deco, Commercial Style, and Renaissance Revival, as well as more eclectic revivals. His own office building, which was built in 1927, was a mix of Moorish Revival and Commercial styles. Dean's residential work, most of which was located in Huntington, was primarily Colonial and Tudor Revival in style.

In 1924, John G. Ricketts commissioned Dean to design him a home. Born in Cabell County on December 5, 1880, Ricketts was a real estate dealer involved in the development of the south side of Huntington. He was responsible for creating neighborhoods referred to as Fairfax Court, Ricketts Place, and Holswade Park during the 1920s. Records show that on August 31, 1923, Ricketts filed a map that identified two areas of planned development, Ricketts Place and Fairfax Court, which would be situated at the top of Washington Boulevard. At the time, Huntington was experiencing a period of rapid growth and economic prosperity, with residential development keeping pace with the expansion of the city’s commercial districts. There were few houses south of the C&O Railroad tracks at the start of the twentieth century, but by the 1920s land on the south side of Huntington had become the city’s first elite suburb. This development was owed largely to the opening of Ritter Park in 1913 and the extension of a streetcar line down Eighth Street, both of which encouraged Huntingtonians to settle south of the railroad. In contrast to downtown Huntington's Victorian neighborhoods, the homes of these wealthy citizens were built in a variety of newer architectural styles, such as Prairie, Craftsman, Colonial Revival, and Tudor Revival.

Ricketts set aside a large corner lot in the neighborhood called Ricketts Place for his own residence. Located at the top of the newly-constructed Washington Boulevard, the home was positioned to have a prominent exposure from the street. The sprawling stone residence of nearly 16,000 square feet was built at a cost of $125,000, or around $1.6 million in today’s dollars. The house features a large, low roof punctuated by eyebrow dormers and four heavy stone chimneys, along with a stone entrance pavilion and porte-cochere. The cedar roof shingles are positioned in a curved fashion, creating a wavy appearance that resembles thatch. The house’s false thatch roof, along with its interior trim and the layout of its rooms, are elements of Tudor Revival architecture. A popular style for suburban homes during the 1920s, Tudor Revival homes often have steeply pitched roofs, front facing gables, and half timbered wall surfaces. However, key aspects of the Ricketts House were designed in the Prairie style, which was popular at the same time as Tudor Revival. Despite its Tudor thatch roof, the home’s low, sprawling form and massive stone pavilion columns are typical of Prairie architecture. As a result, the Ricketts House is distinctive as an English manor house in the Prairie style.

Ricketts and his family lived in the house for only four years after it was completed, as the onset of the Great Depression in 1929 sent Ricketts into financial ruin. The house then came under the ownership of businessman Samuel Biggs, whose family lived there until 1946. During this period, the Biggs family constructed a free-standing playhouse to the rear of the house. In 1946, the Ricketts House was sold to Francis A. Scott. Originally from Michigan, Scott was a prominent orthopedic doctor who served as Chief of Orthopedics at St. Mary's Hospital for several years. In 1954, Dr. Sarah Louise Cockrell Stevens and her husband, Dr. Richard Stevens, acquired the Ricketts House from Scott. The Stevens family adapted the original four-bedroom layout of the house to accommodate their seven children by dividing the upper floor, which originally housed the maid’s quarters and a large playroom, into bedrooms. The family also covered an outdoor terrace with a modern skylight structure in 1966. On April 9, 1969, the original cedar shingled roof was destroyed by fire and replaced with asphalt shingles. The new shingles were layered in wave courses to replicate the false thatch appearance of the original roof. The Ricketts House was added to the National Register of Historic Places in 1994. The Ricketts House changed ownership around 2012 after Dr. Stevens passed away. Although the current owners have made renovations to the house, including repairs to its exterior, the home has retained much of its historic character. It remains an outstanding example of Levi J. Dean’s work, demonstrating a unique fusion of two of the architectural styles popular for suburban American homes of the 1920s.