The twenty-six-story Rand Tower opened in 1929 as the tallest building in Minneapolis, only to be lose that title within a year. Before Rand Tower emerged, the city had restricted heights of buildings to no more than 125 feet since the 1880s, minus one building that challenged that in 1915. Second generation Chicago School architects designed the stepped skyscraper for Minneapolis at a time when the city's flour industry adapted to changing 1920s consumer culture that arose amidst a growing, robust economy. 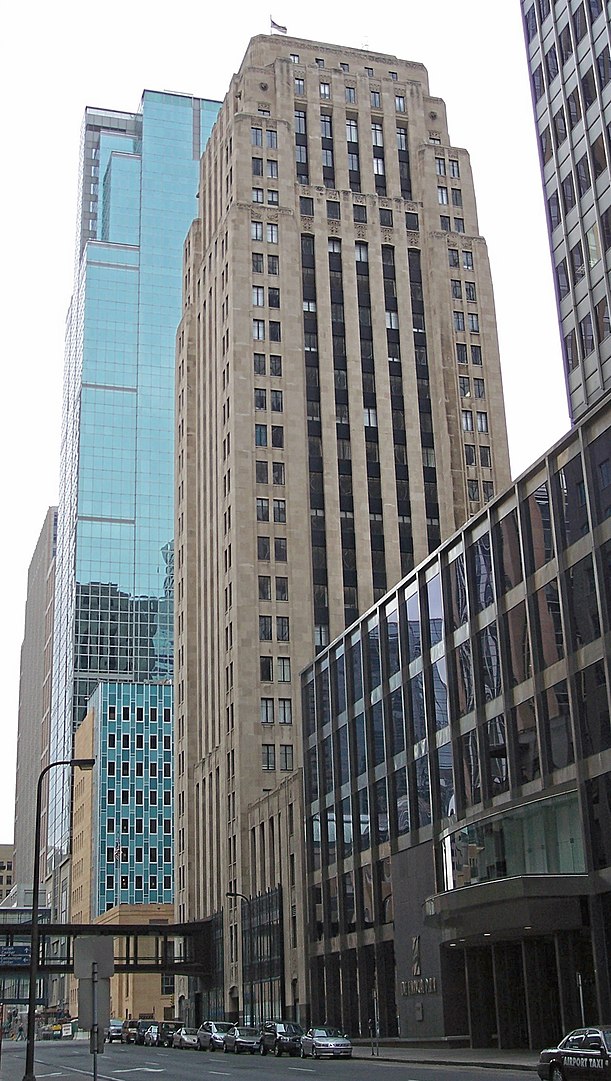 Construction of the Rand Tower finished in 1929. The building was built by a World War I and World War II pilot, Rufus Rand, whose family owned the Minneapolis Gas Co. The stepped skyscraper enjoys an Art Moderne design from the nationally recognized firm of Holabird & Root. The Rand Tower opened in 1929 as the tallest building in the city, although that title lasted for less than one year. The structure emerged at a time when the city transitioned from a town built on flour milling to one benefitting from companies producing flour-based ready-to-eat products.

Downtown Minneapolis grew during the "Roaring 20's" despite the city's flour industry losing its dominance. Steam and electricity overtook water power as the primary supply source, leaving many of the area's mills that relied on water power with declining business success. Furthermore, soil exhaustion in the Dakotas and Minnesota resulting from decades of persistent wheat farming put a dent in the region's flour mill industry. As a result, companies that eventually grew into General Mills and Pillsbury marketed their goods directly to customers, created slogans and mascots (like Betty Crocker), sponsored baking contests, and developed mixes and prepared foods such as pancake mixes and cereal.

Rand Tower served as one of the first challenges to an 1890 height restriction that limited buildings to no more than 125 feet. (The original limit stood at 100 feet in 1890, but officials later raised the maximum height to 125 feet.) The Minneapolis Civic and Commerce Association reimposed the mandate after the First National – Soo Line Building finished in 1915 with a height of 252 feet. Regardless, the Rand Tower and Foshay Tower emerged in 1929, soaring 26 stories and 32 stories, respectively; the Rand Tower stood as the tallest building until the Foshay building appeared less than one year later.

John Holabird and John Root were second-generation Chicago School architects who designed the building. They took over the famed Holabird & Root and continued in the lauded firm's traditions during the late 1920s and 1930s. The two designed several stepped skyscrapers in Chicago and throughout the Midwest as well as the Rand Building. The building features terrazzo floors in the lobby and ornamental carvings of Mercury (the Roman god of merchants and travelers) holding planes above the entrance.

Today, the building is currently in the process of renovation and conversion into a luxury hotel.