The Patnude house belonged to one of Olympia's most significant residents of the nineteenth century. Charles Patnude came to the city from Wisconsin in the 1880s and established himself as a builder, as well as a bricklayer, mason, and plasterer. Patnude built or helped to build many of Olympia's most historically significant buildings. The Patude family lived in the home on 8th Avenue for just two years, from 1893 to 1895. The home is listed on the National Register of Historic Places. 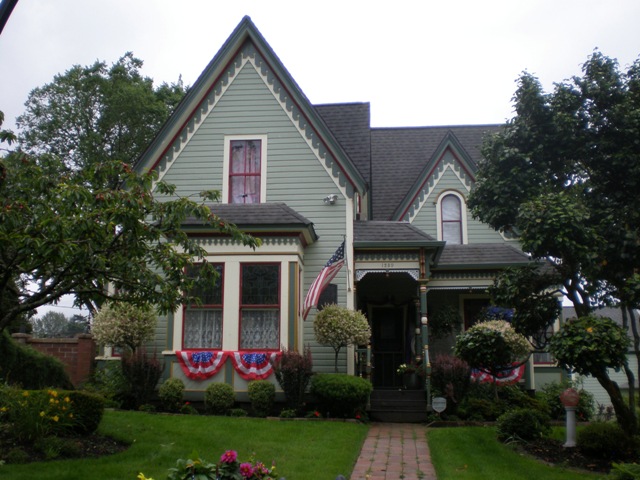 A native of Quebec, Charles Patnude came to Olympia by way of Wisconsin. He moved to the town in the 1880s and began to establish himsself as a talented builder, mason, bricklayer, and plasterer. Platnude built or worked on several of the most significant of Olmpia's early buildings, including the Old State Capitol, Providence Academy, and the 1902 Courthouse.

Within a few years, Patnude was a successful businessman in Olympia. In 1893, he built the home on 8th Avenue for $2,000. The home attracted a good deal of attention because of its unique combintation of styles and elaborate ornamention. The two-story home features multiple gables and Gothic influences.

The Patnude family lived in the home for only two years, from 1893 to 1895. In 1895, the home was foreclosed on, as were a number of homes in Olympia, due to the ecnomic depression of the early 1890s. He eventually built a new home on Jefferson Street for his large family.

The Patnude House has changed owners numerous times over the years and was once divided into apartments. During the twentieth century, the home went through a period of decline but was eventually restored and rehabilitated. The home is listed on the National Register of Historic Places.