August Palmtag, a Eureka businessman, commissioned this property in 1893. During the late nineteenth century, the commercial area that now comprises Eureka's Old Town was experiencing considerable prosperity and a construction boom. Architecturally, this property is a good example of the Queen Anne style in a commercial building. It contributes to the Eureka Old Town Historic District, which is on the National Register of Historic Places. 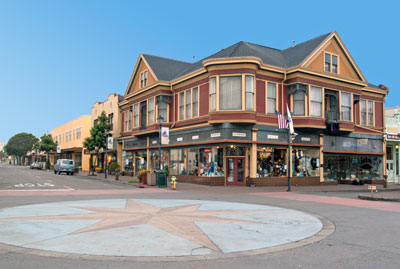 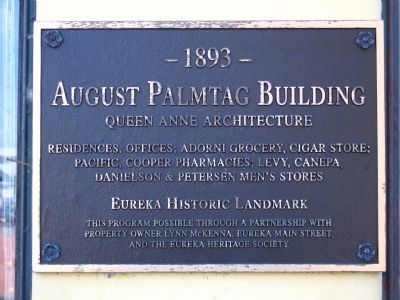 In 1893, August Palmtag commissioned Knowles Evans to construct a two story Queen Anne style property for commercial use. To construct the property, an older building was torn down and another was relocated. These buildings, which housed Pratt's Furniture and Levi Clothing, were simple structures with little architectural detailing, built by the earliest settlers in Eureka. However, by the late nineteenth century, this booming commercial district had begun to reflect the changing tastes and acquired wealth of Eureka's business community.

The August Palmtag building is a fine example of commercial architecture built in the Queen Anne style in Eureka's Old Town. The second story of the building features a large, flat-roofed, rounded and cantilevered bay window. Originally, it was capped with a copper roof, thus serving as the primary focal point when viewed by pedestrians from the street. From the interior, the gently bowed edges of this large bay offer an excellent two-way view of both F Street and 2nd Streets. The corner bay is complemented by additional bays with pedimented gables on each facade of the building.

Although the ground floor of the property was remodeled in 1915 and 1922, the second floor remains as it appeared when it was originally built, with details such as patterned shingles in the Queen Anne style. The builder, Knowles Evans, had previously worked as a secretary for the Lincoln Mill Company before venturing out on his own. After completing the August Palmtag Building in 1893, Evans enjoyed a successful career in Eureka that also included building the city's Carnegie Library, as well as Eureka's Renaissance-style Georgeson Block building in 1903.

The first business to occupy the primary storefront in the August Palmtag building was the Pacific Pharmacy, a mainstay in Eureka's Old Town during the late Victorian era. In addition, August Palmtag ran a wholesale liquor business from this property. In the rear of the building, a cigar & confectionary shop, as well as a produce shop, sold goods to customers along Opera Alley. On the second floor, the office of Dr. Theodore Felt and his son, Dr. Rae Felt, occupied the space with the large cantilevered bay window. Dr. Theodore Felt, originally from Kentucky, was one of the first doctors to arrive in Eureka during its early gold mining days when medical care and supplies weren't readily available in remote locations. A generation later, his son, Dr. Rae Felt, graduated from the University of California Medical School and served as a primary physician for the U.S. Marine Hospital in San Francisco.