A Chicago landmark, this eleven-foot-tall bronze sculpture was made by Lorado Taft and Leonard Crunelle and depicts George Washington, with Robert Morris and Haym Salomon during the events of the American Revolution. 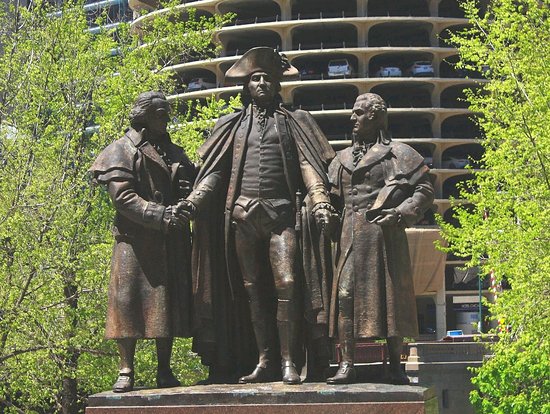 In August of 1812, the Potawatomi still controlled this area and relations with the tribe were critical to American leaders at Fort Dearborn.. Captain Nathan Heald, a U.S. Army Officer, was stationed at Fort Dearborn during the War of 1812 and began to evacuate the ninety-four people living within Fort Dearborn owing to the power of the Potawatomi tribe and deteriorating relations between tribal leaders and American leaders in the area. Heald had the ninety-four people travel to Fort Wayne but they were attacked and most were either killed or captured while Fort Dearborn was sacked. From the American perspective, the event was known as the Dearborn Massacre. Heald Square was named after Captain Nathan Heald for his leadership during this time.

In 1934, Heald Square became part of the Chicago Park District but its ownership was transferred to the City of Chicago as a key component to the Second Functional Consolidation Act in 1959. On July 4, 1936, a Chicago attorney, Barnet Hodes, who was also head of the Chicago Department of Law at the time, led an organized attempt in order to put down the rise Anti-Semitism in the Chicagoland area. “Hodes defined the purpose of the foundation: “Leaders in every walk of life and representatives of every cultural group have confirmed the conviction that a major contribution to patriotism, historical knowledge, and understanding of the part played by peoples of various nationalities in the building of America will be made by the erection in Chicago of an appropriate memorial symbolizing the cooperation that George Washington received from Haym Salomon and Robert Morris.” Hodes felt that a commemorative statue of Salomon standing alone would not deliver the message of intercultural cooperation as effectively as a sculpture with non-Jewish patriots like George Washington and Robert Morris.” (Carl Volkmann) Hodes had made the decision and had chosen Lorado Taft to be the main artist in building this amazing sculpture. Hodes had also created a campaign to raise $50,000 to complete this project. Taft had completed a small yet significant amount of detail to a study model of the sculpture that had Robert Morris and Haym Salomon standing side by side with George Washington.

Taft passed away on October 30, 1936, leaving the project incomplete. Taft’s works for this project were later presumed and completed by Leonard Crunelle, Mary Webster, and Nellie Walker. George Washington was modeled by these artists after taking inspiration from the 18th-century bust version of George Washington by Jean Antoine Houdon. In 1941, the Heald Square Monument was dedicated on December 15. It became the first sculpture in the Chicagoland area declared an official city landmark by the city council in the early 1970s.

Keating, Ann Durkin. Rising Up From Indian Country: The Battle of Fort Dearborn and the Birth of Chicago. Chicago ; London: The University of Chicago Press, 2012.