This is a contributing entry for Museums at Lisle Station Park and only appears as part of that tour.Learn More.

Built in 1881 in Aurora, IL Original location: Chicago, Burlington and Quincy Railroad, Burlington Northern Railroad Primary use: Staff lounge, conductor’s office, operational duties Other car numbers used: CB&Q 208, BN 11076 Many of the railroads in the United States called the work car at the end of their trains a caboose. The Chicago, Burlington & Quincy Railroad (CB&Q or Burlington) instead used the term “waycar.” This likely originated from the very old passenger cars that had been converted for use as “Way Freight Rider Cars” for the train crew. This term was shortened by Burlington employees to a single word. The waycar was developed as a vehicle to carry crewmen who operated the trains. These men kept train records, operated car switching and braking, and monitored the cars while it was on the main line. Waycars had multiple accommodations and items to allow the crew to work effectively as they traveled many hours up and down the train lines: beds for sleeping, a stove for heating and cooking, benches to sit and stow items away, and more. Crewmen could give a warning about trouble with the freight cars and collect mail bags from their vantage point in the upper-level cupola. To increase train visibility, kerosene marker lights with colored lenses were hung on the back of the waycar. A desk was included for the train conductor to work on his train logs and records. At one time, waycars were permanently assigned to a specific conductor who made the car his home on wheels. The Lisle Park District brought this car to the complex in 1998. All of the original interior items were missing at this time because the waycar had been used as a modern office room. Lisle Heritage Society members have made reproductions of some original components, and museum artifacts are on display to represent a historic piece of railroad equipment and way of life no longer seen in Illinois. 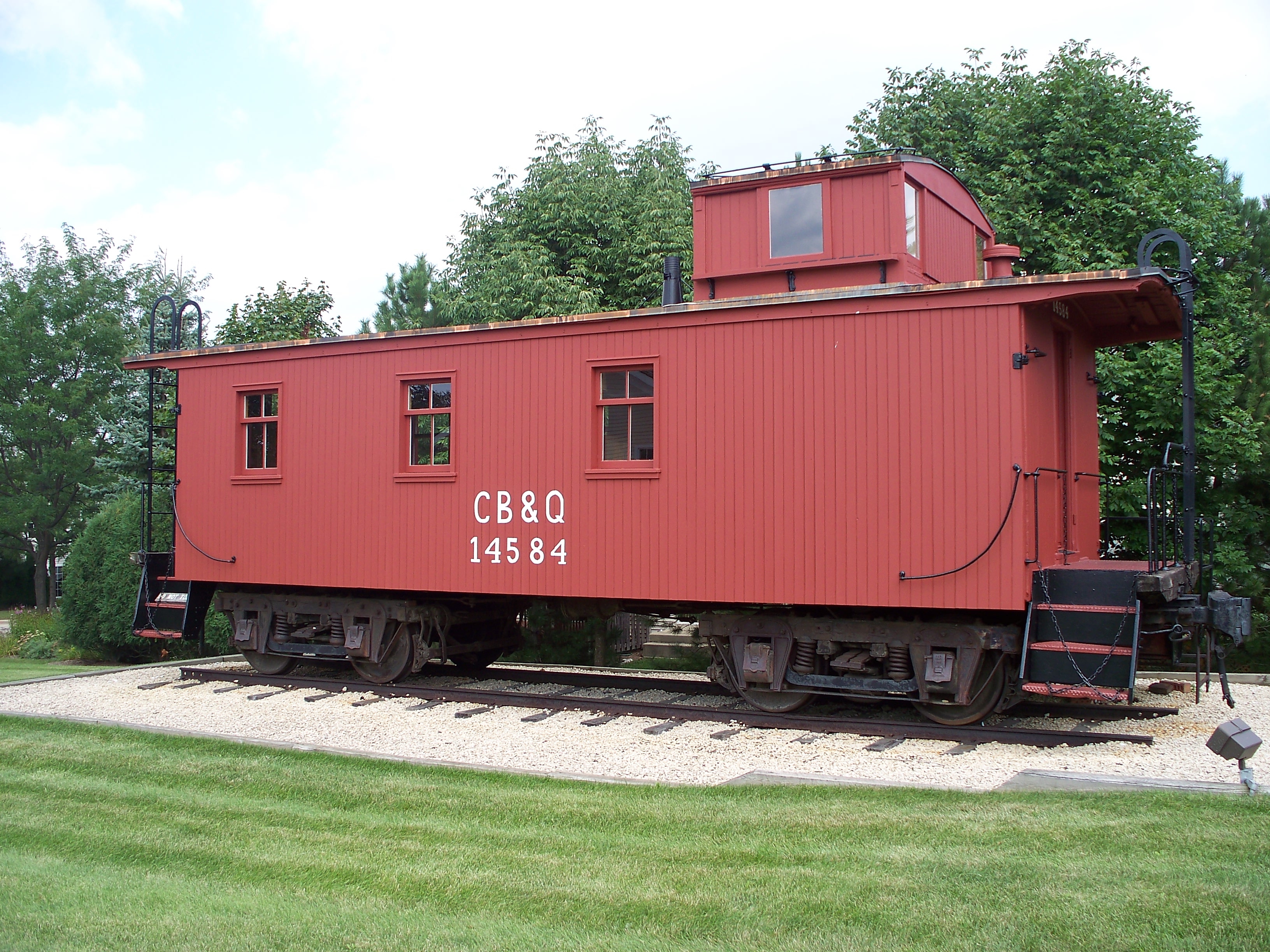 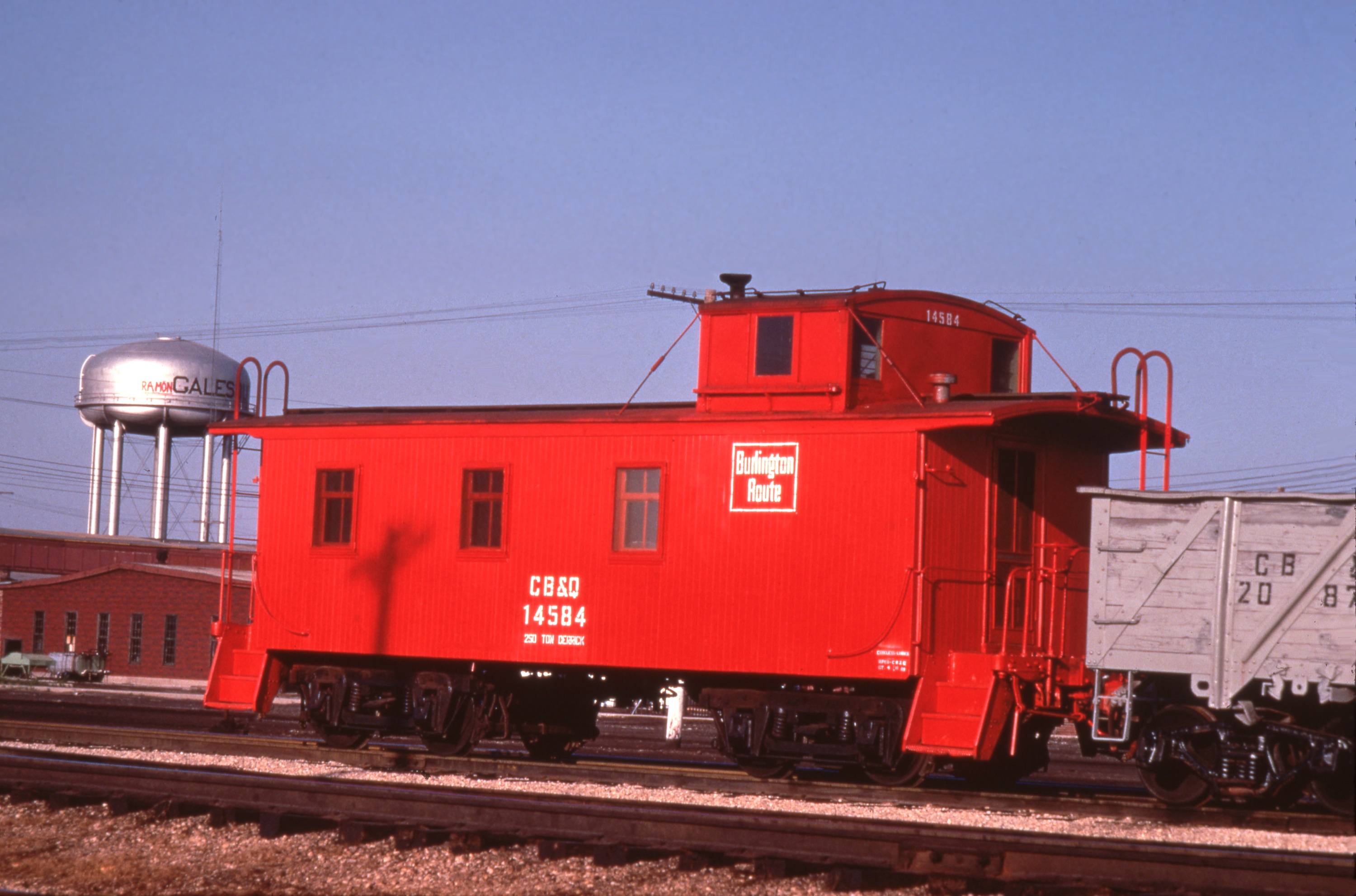 The inside of this waycar was restored by Lisle Heritage Society volunteers. When it was received by MLSP in 1998, the interior was covered from floor to ceiling with shag carpet! 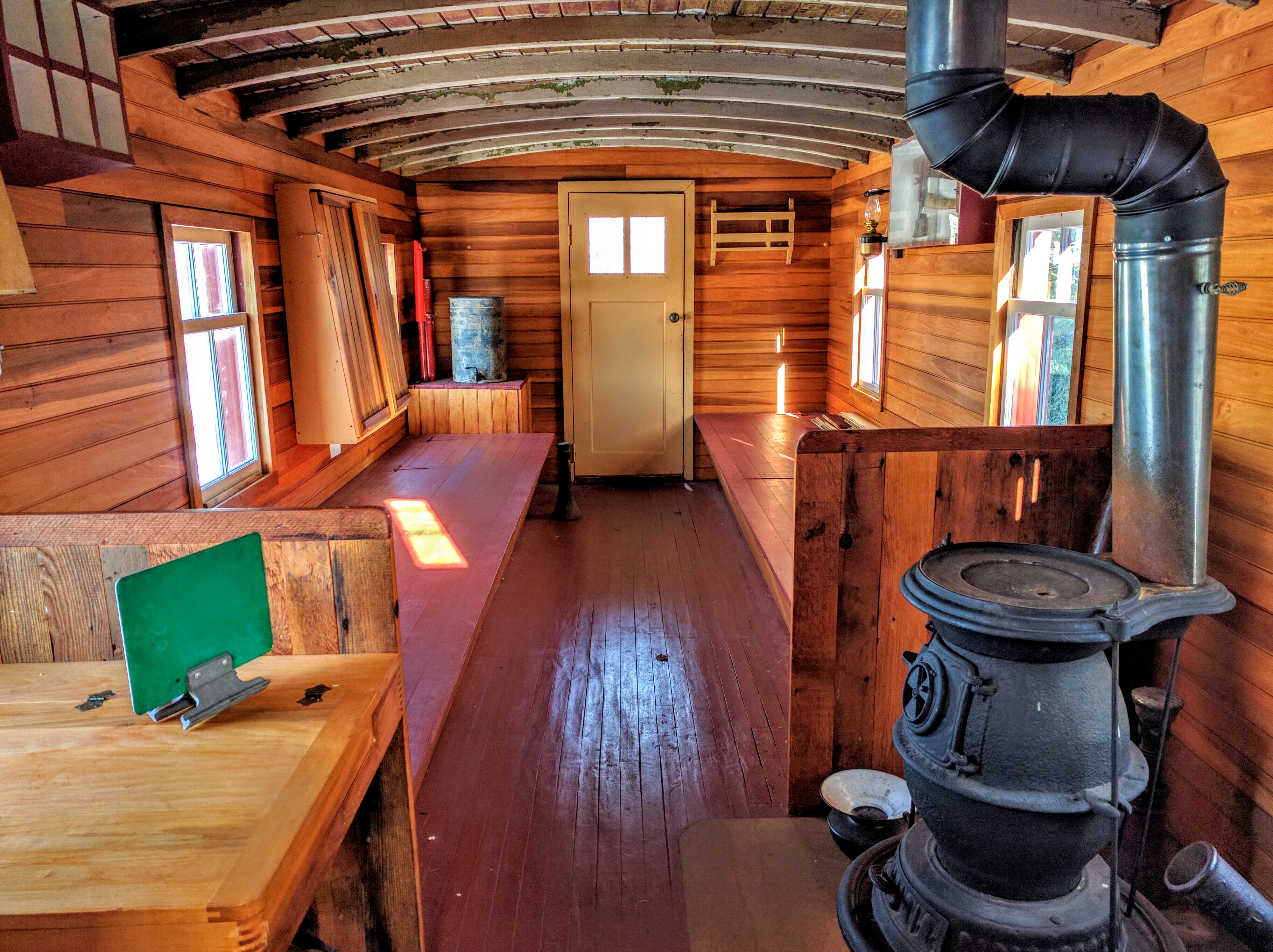 Conductor's office. The train conductor was in charge of everything that happened on the train and sat in the caboose. 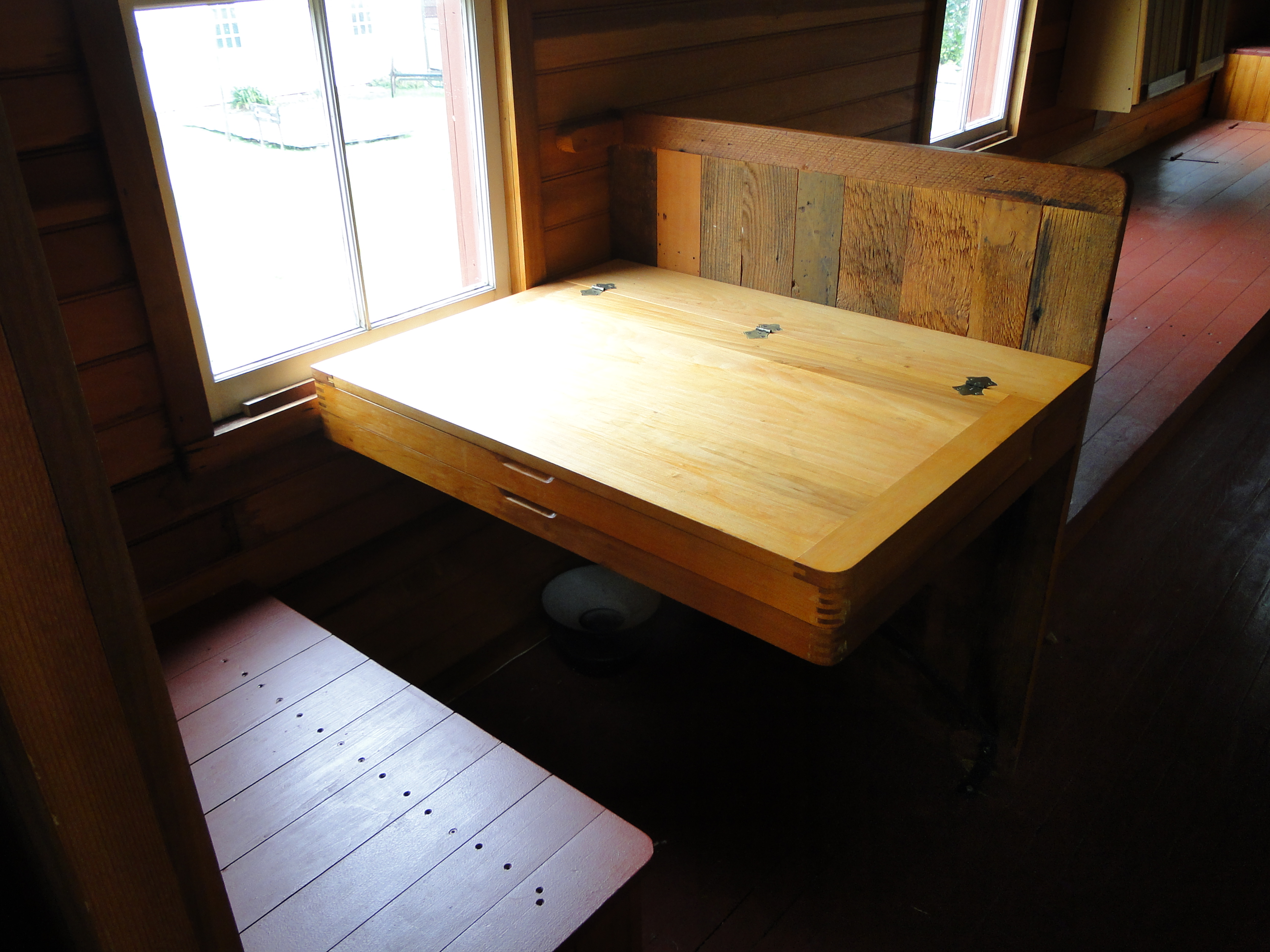 The fold up dining table was useful for eating meals and keeping items from falling out during trips. 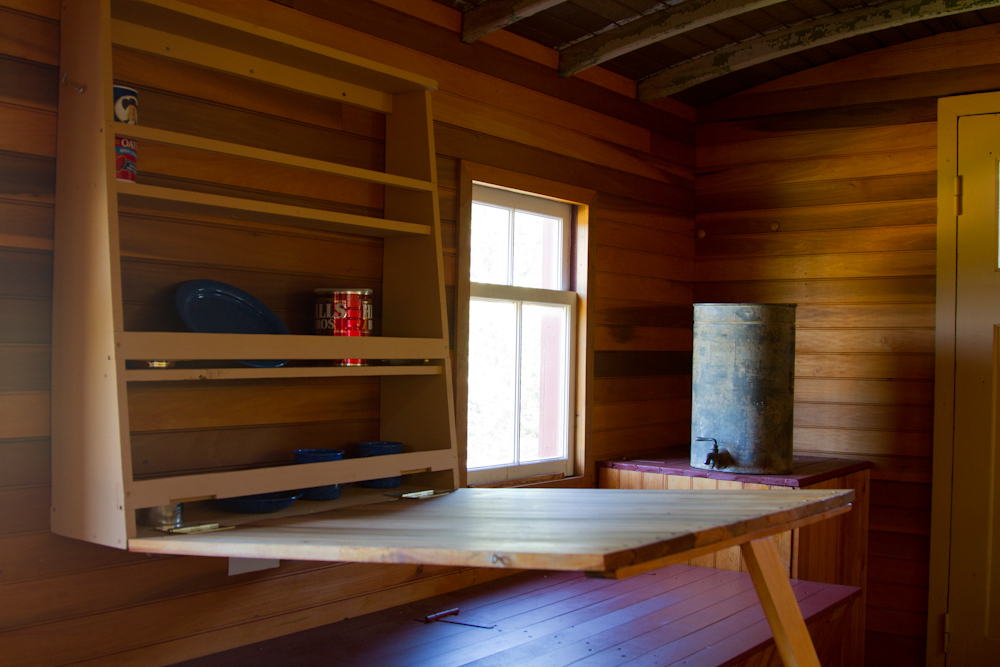 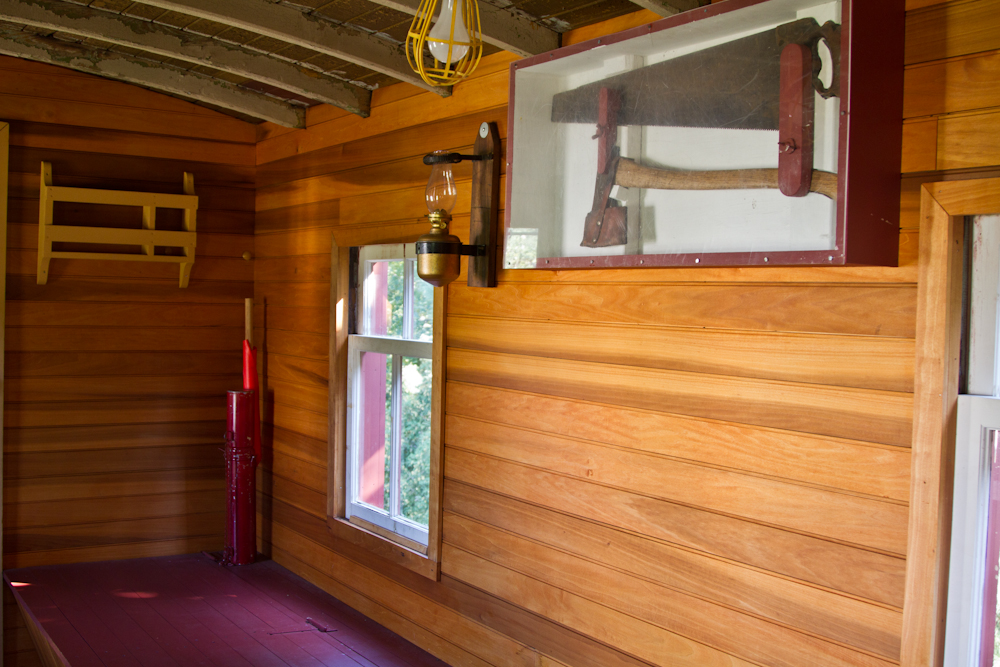 The cupola (top section) is a lookout area for train workers to see any issues with the cars or tracks. The vertical areas (bottom) were for storing large track tools - and where the restroom was located. 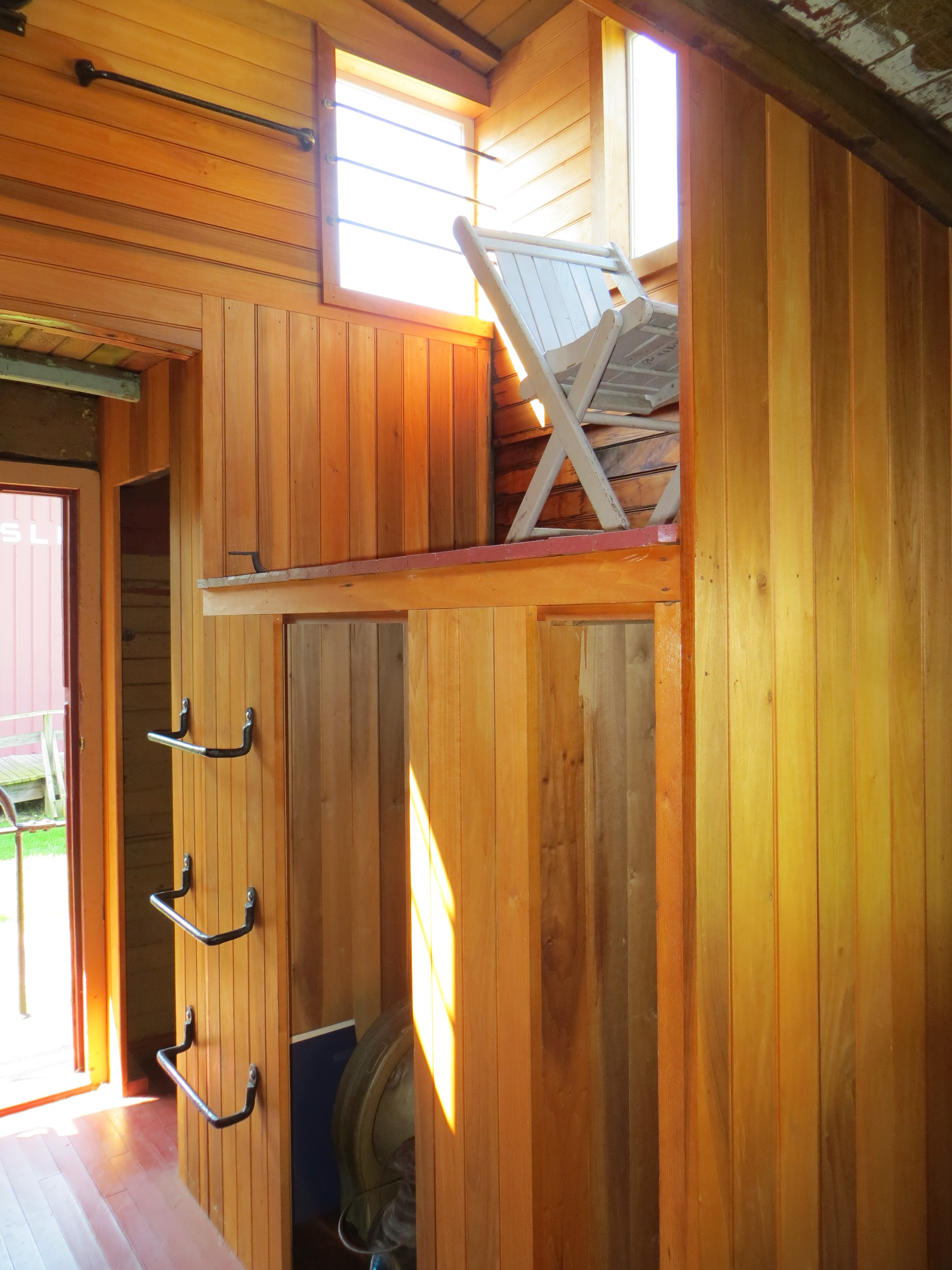 The cupola (top section) is a lookout area for train workers to see any issues with the cars or tracks. 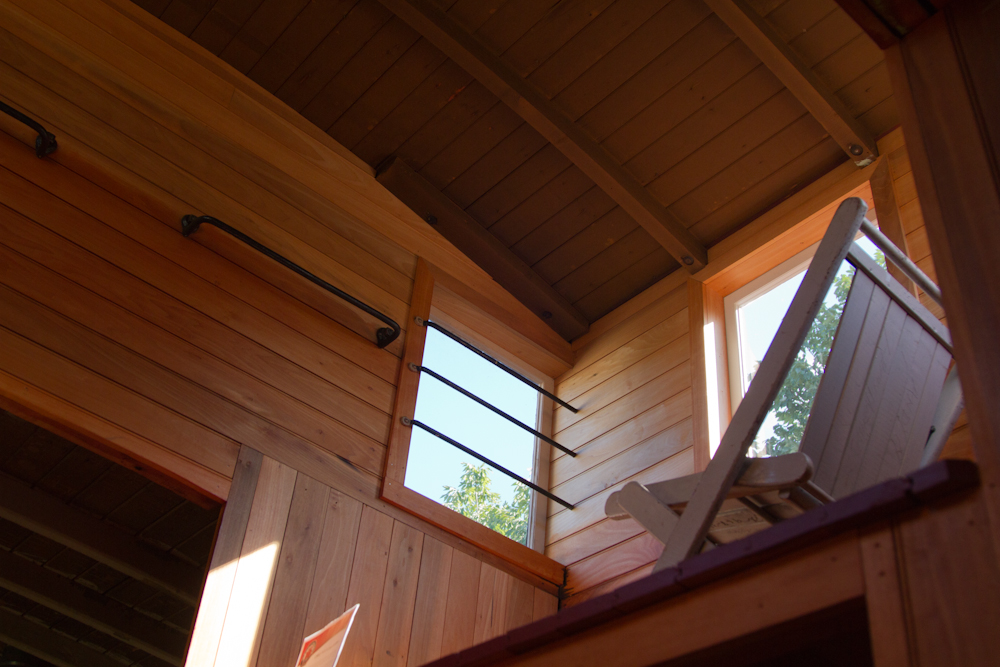 MLSP plaque about this caboose car 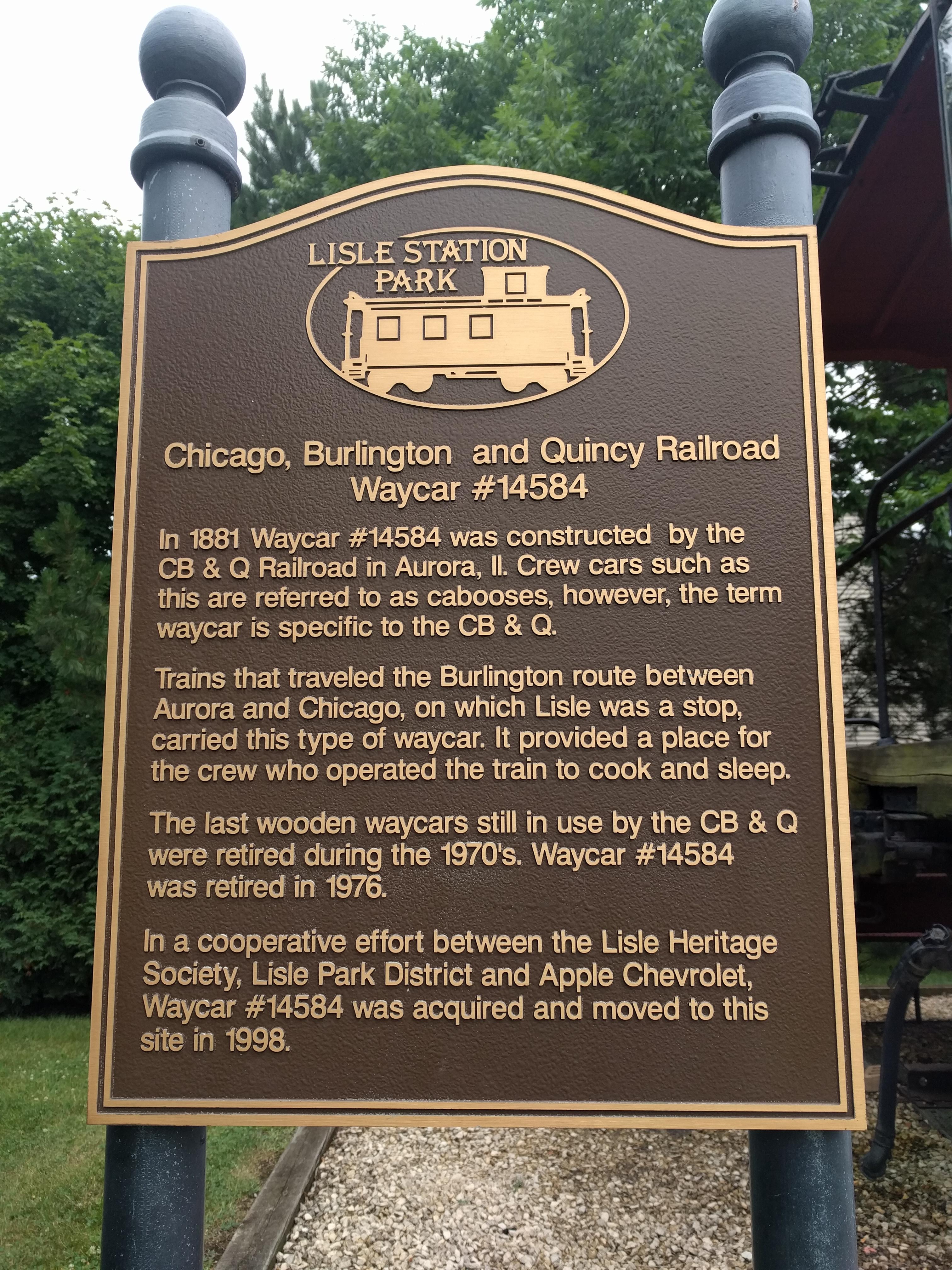 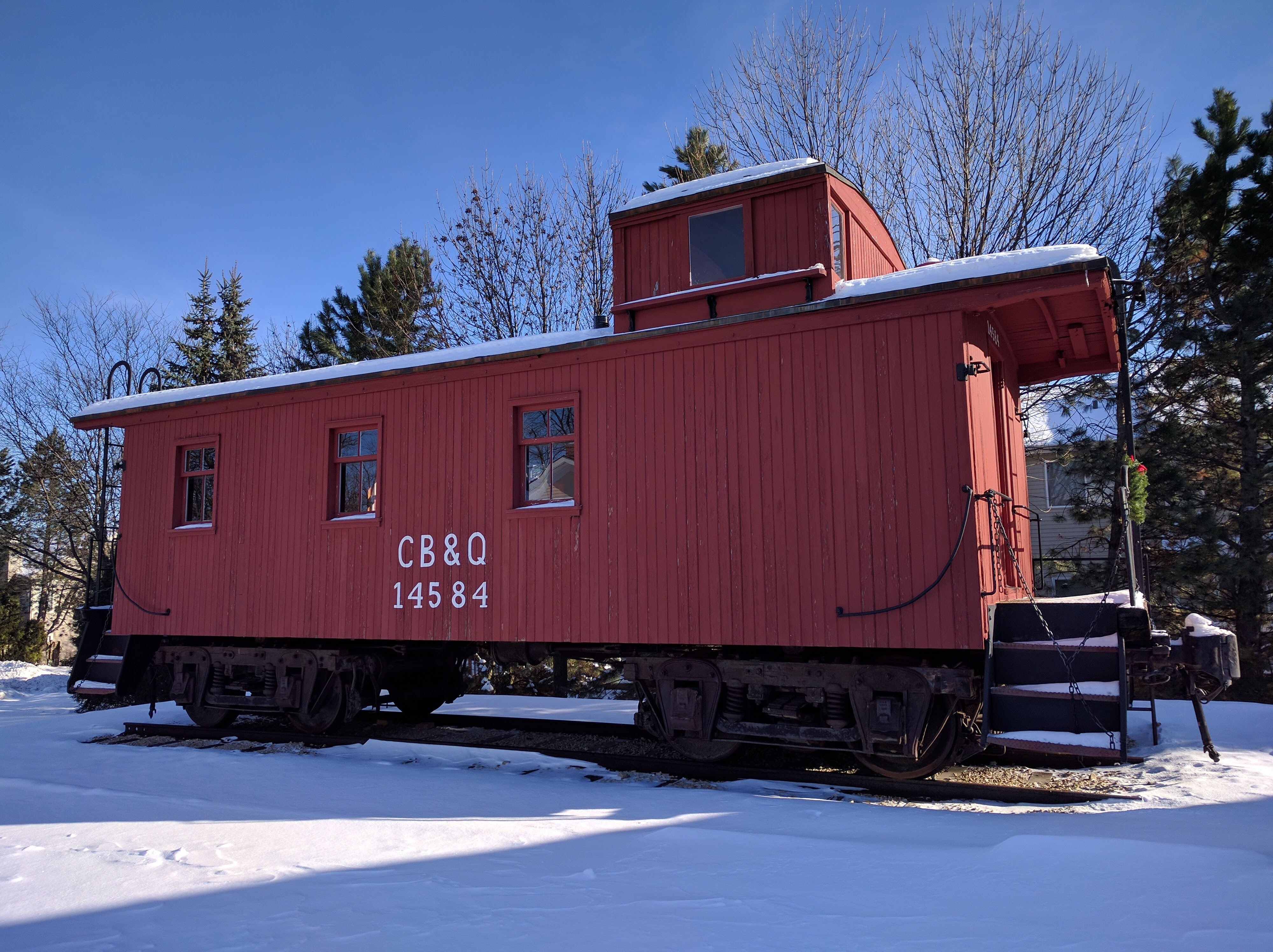 In 1881 Waycar #14584 was constructed by the Chicago, Burlington, and Quincy Railroad at the Roundhouse in Aurora, IL. Crew cars such as this are referred to as cabooses; however, the term waycar is specific to the CB&Q. It is believed that the term “waycar” originated around the beginning of the 20th century, coming from the use of old passenger cars that had been converted for use as “Way Freight Rider Cars” for the train crewmen. Trains that traveled through Lisle on the Burlington’s route between Aurora and Chicago and beyond carried this type of waycar. It provided a place for the crew who operated the train to cook and sleep. Waycar #14584 was retired in 1976.

Waycar #14584 was found by Lisle Heritage Society members at Apple Chevrolet in Tinley Park, IL where it was being used as an office for a used car salesman. They worked in collaboration with the Lisle Park District to preserve and move the Waycar #14584 to this site in July 1998. Society volunteers spent countless hours restoring the inside to its original appearance, which included removing shag carpet from floor to ceiling.

The caboose car (waycar) was developed as a vehicle to carry crewmen who were needed to operate freight trains. These men kept train records, did car switching and braking, and protected the train when it was on the main line. To accommodate these men when the train was traveling for many hours, the waycar had food, water, heat, beds, a bedroom bathroom, and tools. Examples of these functions and amenities are displayed in Waycar #14584.

Before the invention of automatic train brakes, men had to set the wheel brakes on each car to make the train stop. The brakmen walked on the roof of the moving cars while adjusting each brake wheel. The waycar gave these men shelter from the weather until they were needed to set the train brakes. A stove was added to provided heat and cook food. Beds in the waycar allowed the men to sleep during long trips.

The last wooden waycars still in use by the CB&Q were retired during the 1970s. Today, men are no longer needed to ride at the end of the train in a waycar. The safety, protections, record keeping, and brake control they provided in the past is now handled with automatic hot box detectors, read-end warning boxes mounted on the last coupler, and train control by remote dispatchers with their computers.

The waycar’s cupola, the upper level of the car, played a key role in the safe operation of the train. Crewmen could give a warning about trouble with the cars from this higher vantage point. Signalmen were in charge of holding hanging, and swinging different kerosene marker lamps with colored lenses on the back of waycar to increase visibility and send visual messages to stations and other trains. Flags, flares, and an air operated whistle were also used for signaling while underway. Crewmen leaned out the cupola window to scoop up train orders being held by station workers and bags full of mail hanging on tall station mail posts. Some historically accurate modifications still need to be included, such as the installation of padded seats in the cupola and at the conductor’s desk.

The conductor was the person in charge of the train and his office was in the waycar. The office featured padded seat and seat back as well as a desk for working on train logs, car records, and telegraph orders. At one time, waycars were permanently assigned to a specific conductor who made the car his home on wheels. He even could decide which end of the waycar was the front and which was the back.

A drover is someone that moves livestock animals from ranches to a stockyard or individual buyer. Ranchers in the plains and western areas of the United States could choose to contract a drover to accompany the livestock they wanted to sell. This was especially common in areas that were not close to train depots or if the animals were to be sold at larger markets such as Chicago. Drovers traveled with the livestock in their care over long distances to ensure that animals were safe and sold at market for the correct price.

Burlington Waycar #14584 is a drover’s style caboose. This car includes a bunk area with sleeping space for the train workers as well as drovers traveling on the same train as their animals. Drovers brought the animals to the Depot platform and helped load them onto a livestock car. The animals were walked directly into the train car or up a ramp to a second level in the car. When the train was ready for departure, the drover boarded the bunk section of the train’s special caboose.