Constructed in 1814, this mansion was originally the property of LeRoy Pope, one of the first to purchase land in Hunt’s Spring and the first to construct a mansion of this size in the state. A native of Virginia, Pope served in the Revolutionary War and would later become a planter and chief justice. The mansion and surrounding lands were built by enslaved men and other laborers, and there were 121 enslaved people recorded in the sale of the property in 1834. The mansion also served as a hospital during the Creek War and Civil War, when it was also used as a military headquarters. After the Civil War, Dr. Patton gave Poplar Grove to his oldest daughter and her husband, Major William Echols. The property stayed within the family until Echols' grandchildren leased it to the University of Alabama Huntsville.

The Leroy Pope home seen from Echols Avenue in 2014. This mansion was a huge advantage to the military in the 1800s 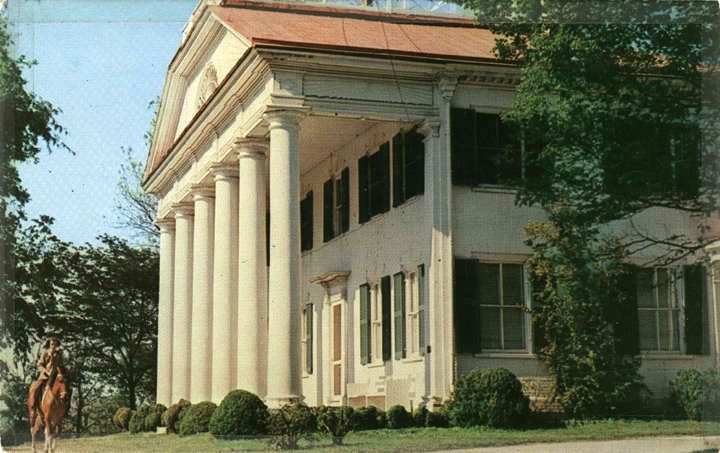 This portrait shows Leroy Pope taken after 1814 when six prominent future leaders stood on his lawn. 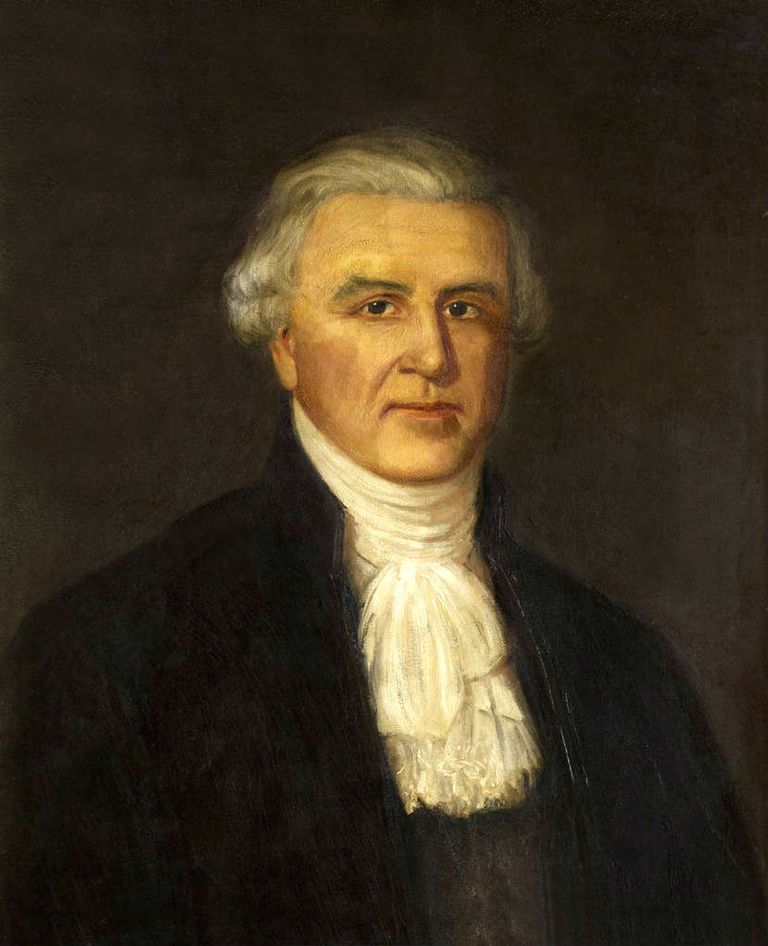 A monument to Lyncoya, also spelled Lincoyer, the Creek Indian child adopted by Andrew Jackson after the Battle of Tallushatchee. 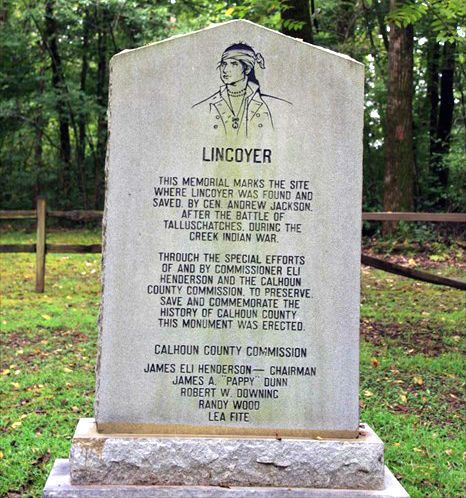 This photo shows the Leroy Pope home that was greatly used by the military during 1814 and again during the civil war. 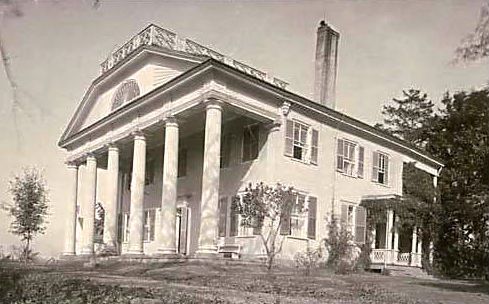 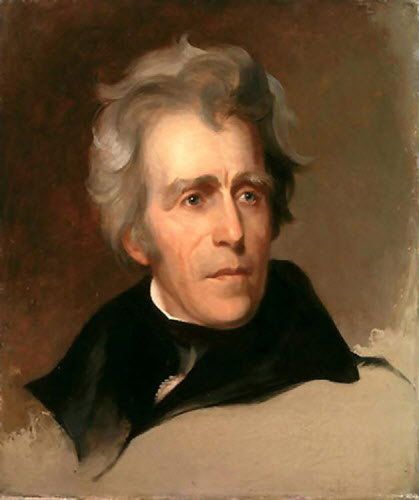 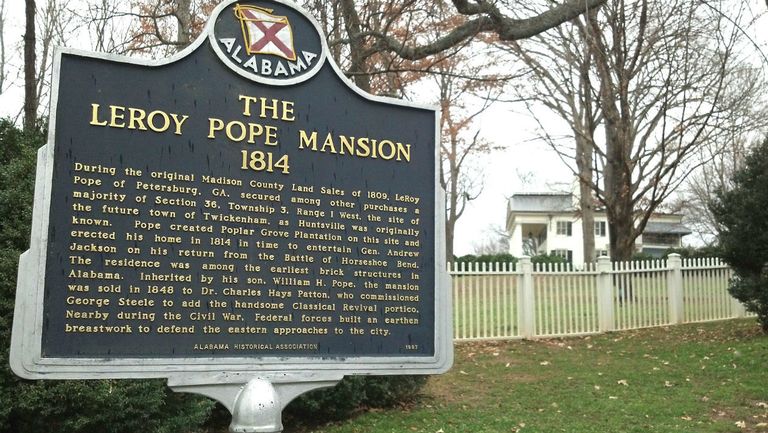 1950s image of the mansion to display a modern day view. 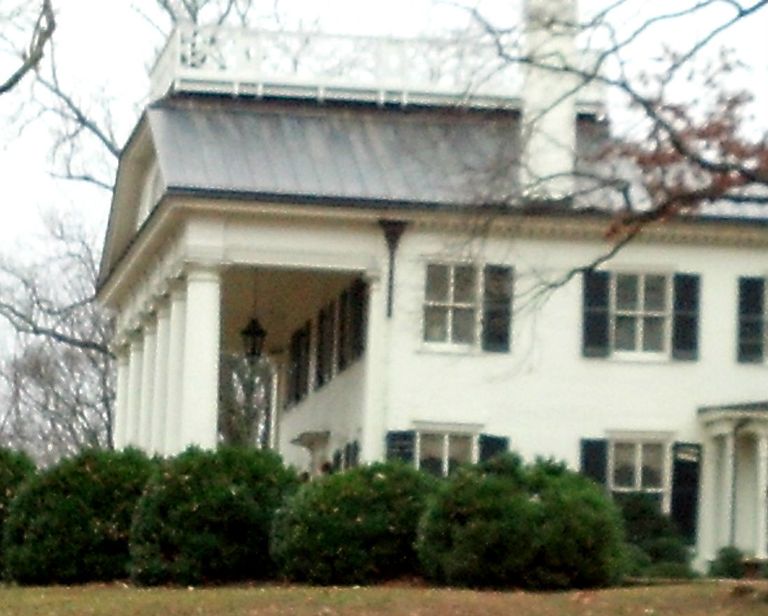 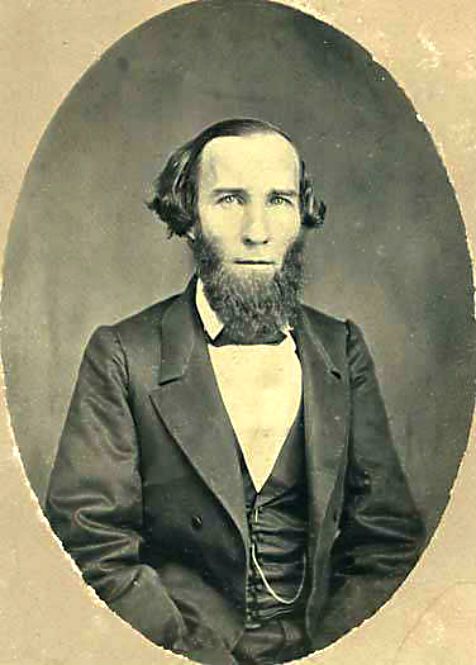 Throughout the Creek War and the Civil War, the Poplar Grove estate, or known as LeRoy Pope's mansion, was used to a great extent. During the Creek War, the mansion was used between the Fort Mims massacre and the Battle of Horseshoe Bend. It served as a place for sick and wounded soldiers as well as Indian prisoners of war. On the other hand, various army officers such as General Edmund Cook used the mansion as a residence and a headquarters during the civil war.

A native from Virginia, LeRoy Pope served in the revolutionary war as a young man before marrying Judith Sale. Together they had five kids and lived in Petersburg, Georgia, until 1810 because of the Alabama Fever. Pope is known as the first man to settle and formally buy land in Hunt's Spring during the Madison County land sales in 1809. However, most settlers regarded John Hunt to have been the first man to settle in the area in 1805.

Quickly becoming a prominent leader in the community, Pope was able to convince the legislature to establish the town as Twickenham before being re-established as Huntsville in 1811. Despite being disliked by most people of Huntsville, the Pope family and their friends regarded themselves as the Royal Family. The family started construction on their mansion in 1813 and finished briefly before General Andrew Jackson’s return to the town in May following the Battle of Horseshoe Bend. Supplies for the mansion were transported down the river before being carted to the construction site. Poplar Grove is known as the first mansion to constructed in the State of Alabama.

The Fort Mims massacre produced more casualties than any other attack by Native people in the 19th century, and it spread fear of further attacks spread throughout Alabama. Settler began to build forts along the river or flee north to Tennessee. In response, the Tennessee militia under the command of General John Coffee was deployed to Alabama. General Andrew Jackson met with LeRoy Pope at that time to talk about possible advantages of his property, especially with Huntsville was the nearest large town. Eager at protecting the investment of his property, Pope agreed to be of assistance and offered supplies to the militia and offered his home as a refuge for sick and wounded soldiers and the prisoners of war.

Also, General Jackson sent a young Indian boy to Poplar Grove with sufficient funds to pay for his well-being until he was able to return home and formally adopt him. Lincoya survived the Battle of Tallushatchee and was found holding on to his deceased parents. Female prisoners of war refused to care for the boy, which is how Jackson got involved into the situation. Lincoya was returned to Jackson in May and would live with Andrew Jackson’s family until his death at the age of 13.

Occurring in March 1814, The Battle of Horseshoe Bend is also known as a massacre, this time of Native peoples. The battle was brutal and ended the Creek War but also resulted in 800 women, children, and men being killed. Afterward, the army began its return and would arrive in Huntsville in early May. The militia were honored by a dinner at Poplar Grove hosted by LeRoy Pope. The celebration included five future governors: William Wythe Bib, Thomas Bibb, Gabriel Moore, Clement Clay, Hugh McVeigh, and future president Andrew Jackson.

LeRoy Pope died in 1844, and his son became the next owner Poplar Grove and the 121 enslaved people that were part of the transfer of propert. Before his son sold the mansion, Pope's grandson, LeRoy Pope Walker, briefly lived in Poplar Grove before moving to a neighboring house. Walker was the Secretary of War for the Confederate States during the Civil War. Additionally, he was the commanding officer who ordered the firing of Fort Sumter.

The Poplar Grove property was sold to Dr. Charles Hayes Patton in 1850 and was under his ownership throughout the Civil War. While the Union Army defended Huntsville from the Confederates, Dr. Patton continued to live there. As mentioned above, the mansion was used for residence and headquarters to various army officials during this time.

After the war ended, Dr. Patton gave Poplar Grove to his oldest daughter and her husband Major William Echols, a West Point Graduate. Their daughter married the President of the First National Bank, Robert Spragins, and their grandchildren would lease the property to the University of Alabama Huntsville. The university would use the mansion for the residence of the university president.