In 2002, the Congregation of Sisters of St. Agnes opened their current motherhouse on land that had previously been operated as St. Joseph Springs Farm. Care was taken in designing the structure to honor and accommodate the natural features that surround it such as the spring-fed streams that run through the property. The motherhouse is comprised of administrative offices, meeting rooms, a chapel, and residences for 36 sisters. 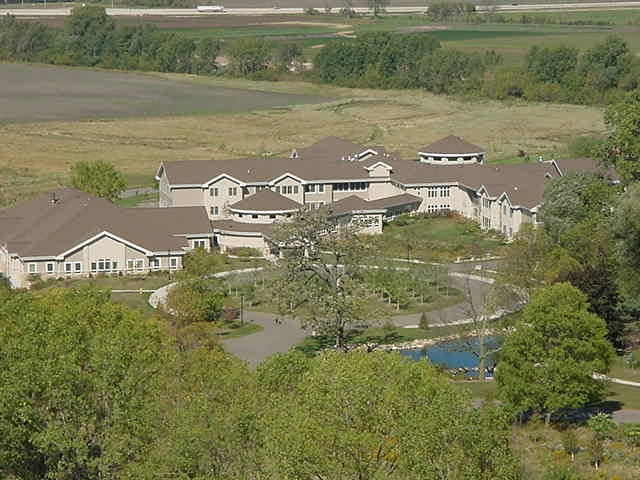 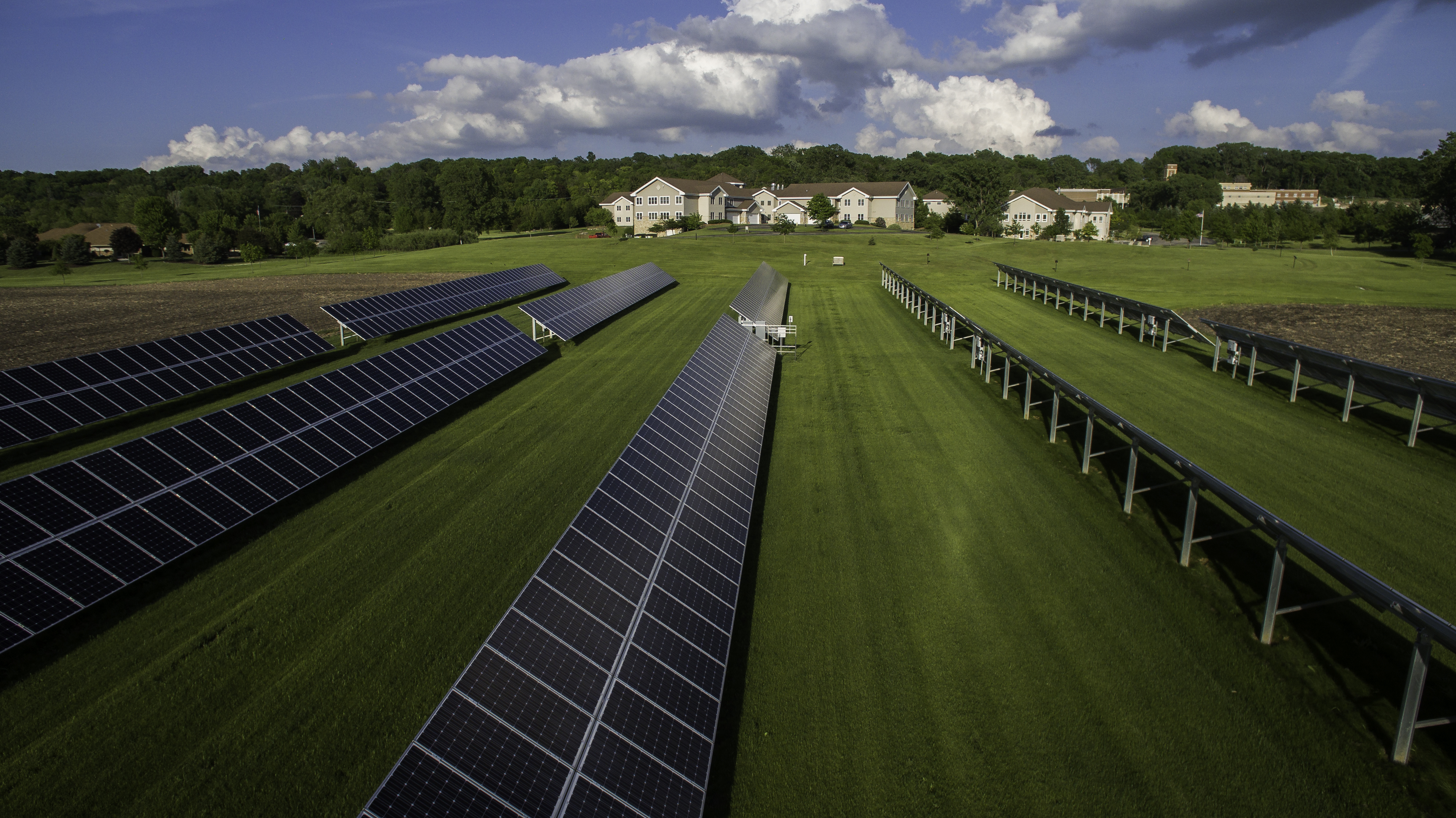 Entrance to the chapel at the CSA motherhouse showing the cornerstones from early motherhouses. 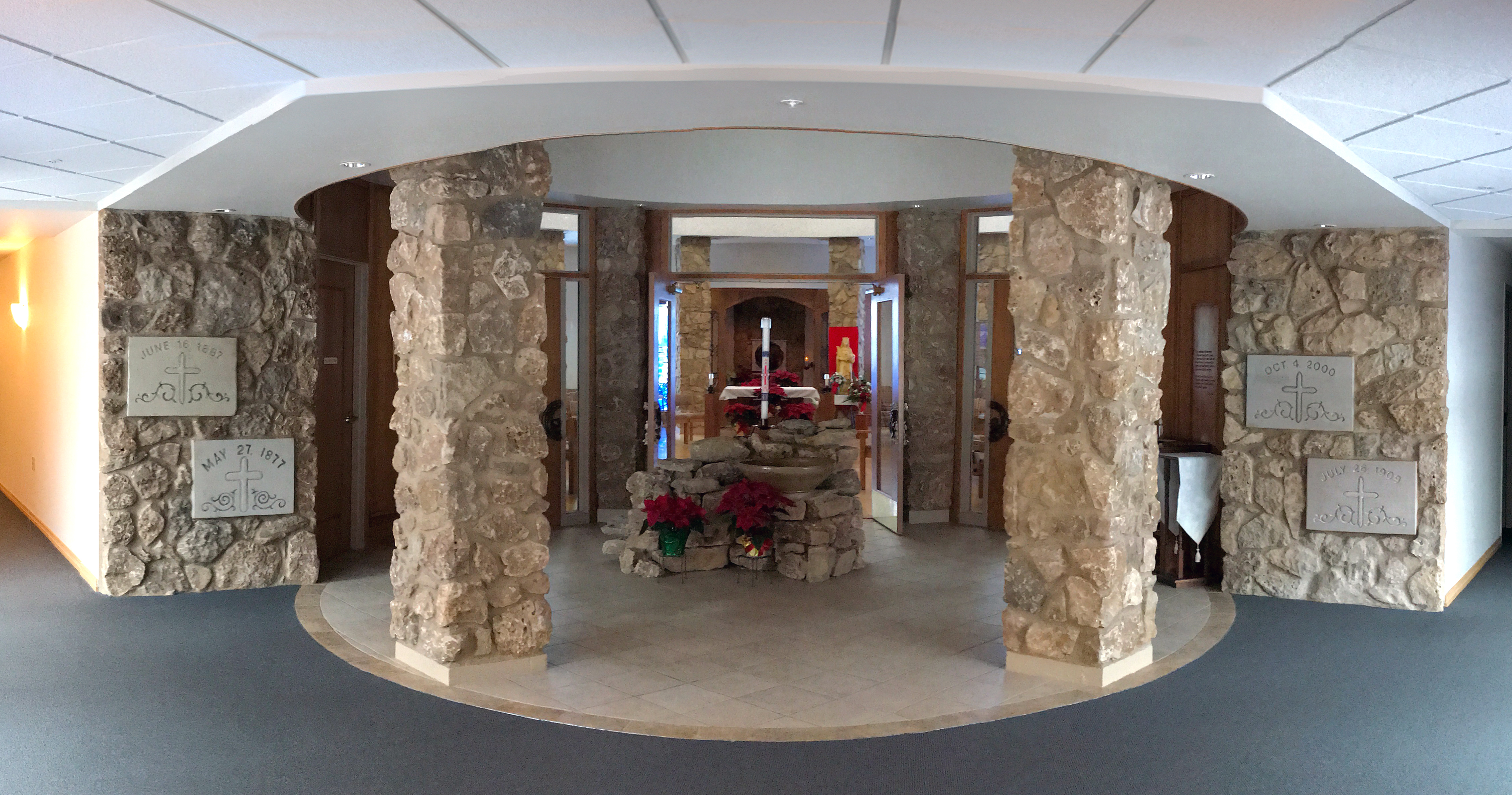 Leaded glass doors leading to the Blessed Sacrament Chapel. The doors were originally part of the motherhouse at 390 E. Division Street. 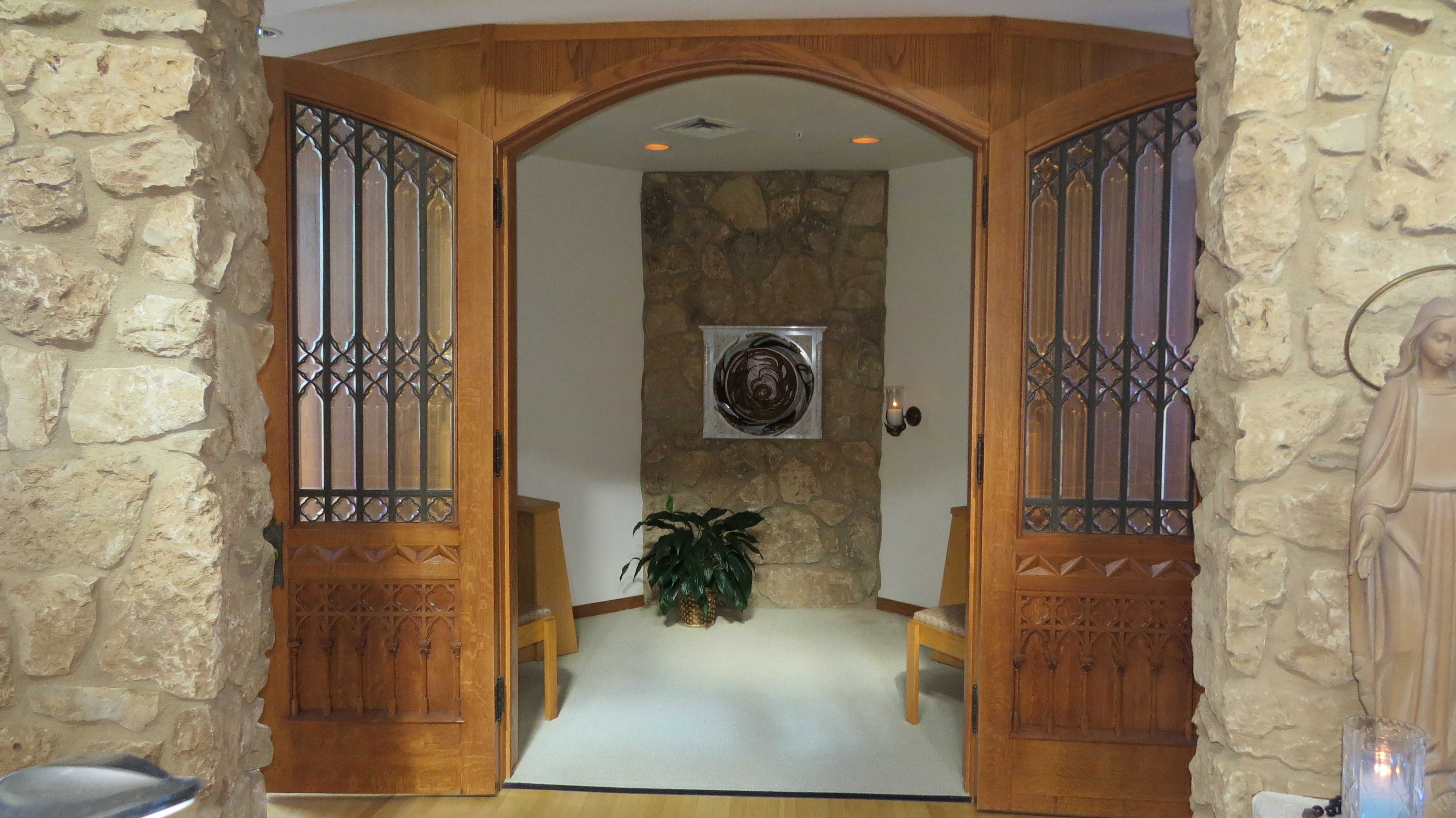 The blue glass windows representing the spring waters which flow throughout the property. 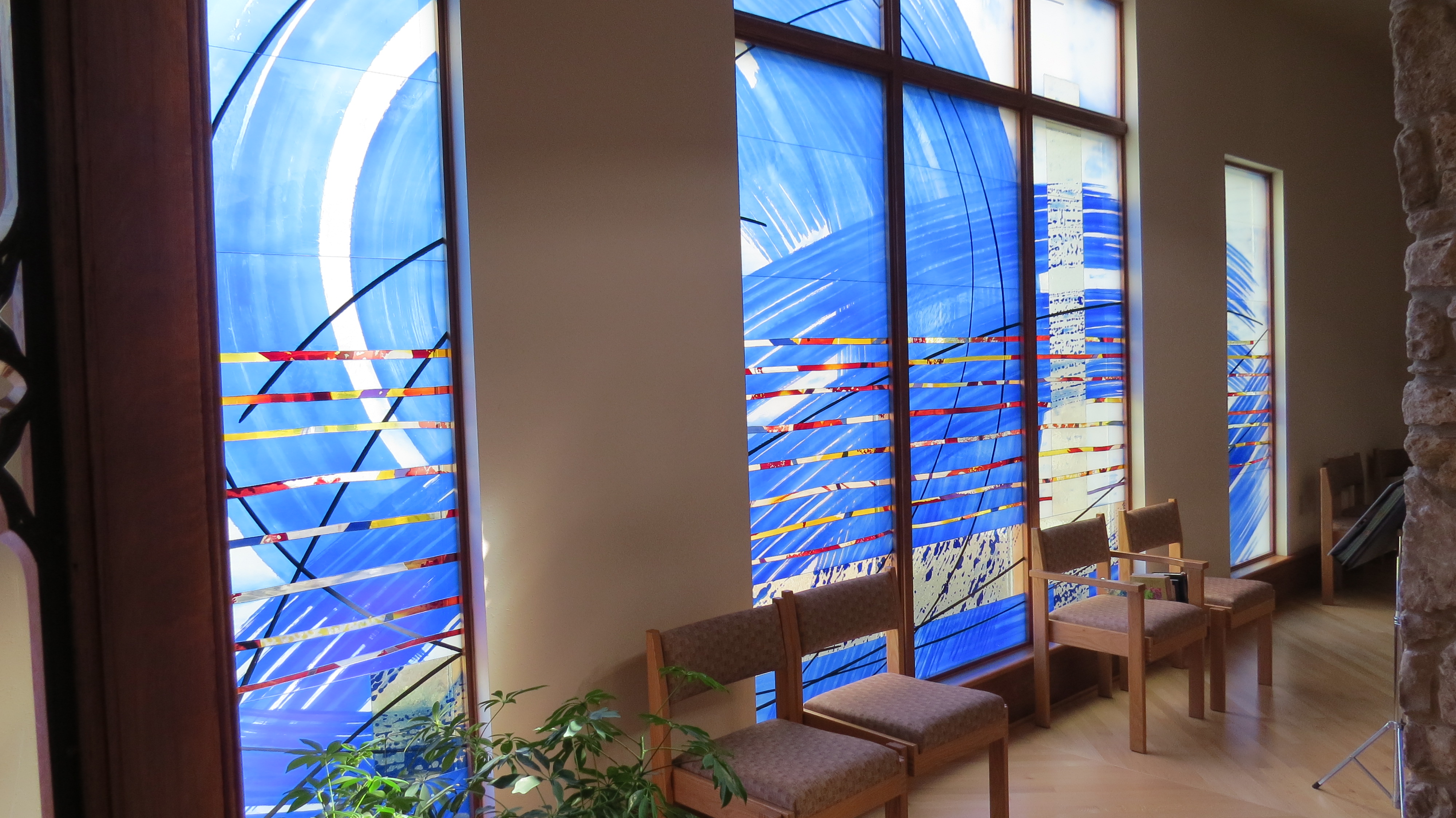 Walking trail through the grounds of the CSA motherhouse, 2020. 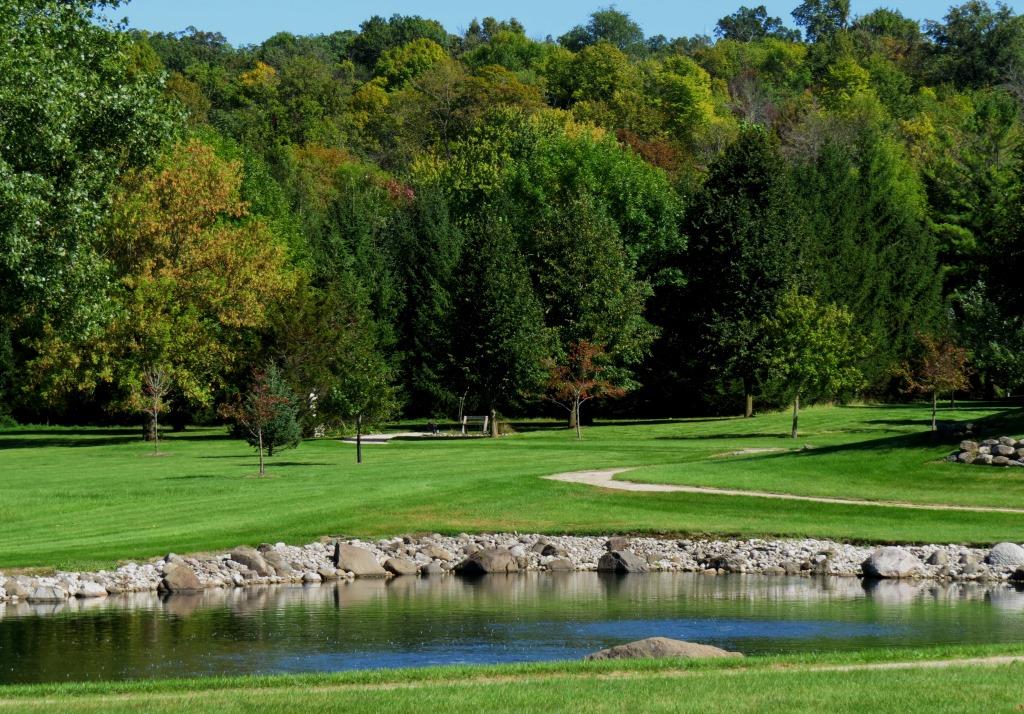 As Father Caspar Rehrl, one of the founders of the Congregation of Sisters of St. Agnes, traversed the land east of Lake Winnebago, he came across seven springs and blessed them with his holy water. Later he wrote, “Oh, how I wish that the Sisters of St. Agnes might someday live on this beautiful tract of land watered by these prolific springs.” In 2002 the congregation fulfilled his vision and opened their current motherhouse on the land which had been used as St. Joseph Springs Farm.

The building, designed and constructed by Hoffman Corporation of Appleton, Wisconsin, contains residences for 36 sisters, a chapel, offices, and meeting rooms. The design focus was responsible stewardship of resources. Natural and locally available building materials were selected including the stone used inside and outside, Niagara Drift from a nearby quarry. Gravel and stone from the foundation of the barn that was previously located on the property were crushed and recycled into pavement for the driveway. Barn boards were removed for recycling, and beams and arches were given to Amish farmers for their future building needs.

The residences and chapel are linked to the administrative offices and meeting rooms by a passageway elevated above one of the spring-fed streams which had impressed Father Rehrl so many years earlier.

The convent chapel was designed by Mark Joseph Costello, OFM Cap. The four cornerstones embedded into the stone pillars at the entrance to the chapel represent three expansions to the former motherhouse at 390 E. Division Street and the current motherhouse. Other artifacts from previous convents were incorporated into the new chapel including the leaded glass doors for the Blessed Sacrament Chapel and altar marble used to frame the new tabernacle.

The windows were inspired by springs which brought the sisters to this site. The opal blue glass swirls represent the water which flows across the grounds. The bright horizontal and vertical bands of bubbly glass represent the water flowing underground and coming to the surface. The bright horizontal bands of red, orange, yellow, and violet may be seen as threads in a tapestry that tie the panels together. The windows were fabricated almost entirely by women, at Derix Glasstudios in Taunusstein, Germany. The glass was made by Lamberts Glassworks in Waldsassen, Germany, from a design by artist Guy Kemper.

In 2015, the congregation installed solar panels on its property as part of its longtime commitment to the conservation of the land entrusted to it. The 880 panels provide half of the motherhouse’s energy needs and generate $35,000 worth of electricity every year.