This historical marker commemorates the Treaty of Medicine Creek, the treaty signed in 1854 by Native American tribes of the Puget Sound region and the federal government. Washington Territorial Governor Isaac Stevens (1818-1862) oversaw the negotiations, which took place at a site just over a mile to the northwest of the marker. The tribes agreed to cede the majority of their ancestral lands (2.24 million acres) and relocate to small reservations (in Washington) in exchange for $32,500 to be paid over 13 years. The tribes were also allowed to continue to fish for salmon, hunt, and find work outside of the reservations. The treaty, which Congress ratified in 1855, did not result in lasting peace, however, as war broke out between the tribes and volunteer militias. Known as both the Indian War of 1855-1856 and the Puget Sound War, the conflict consisted of series of minor engagements that lasted until the fall of 1856. Conflicts between tribes and the federal government would continue in the Washington Territory for another two years.

This historical marker commemorates the 1854 Treaty of Medicine Creek. 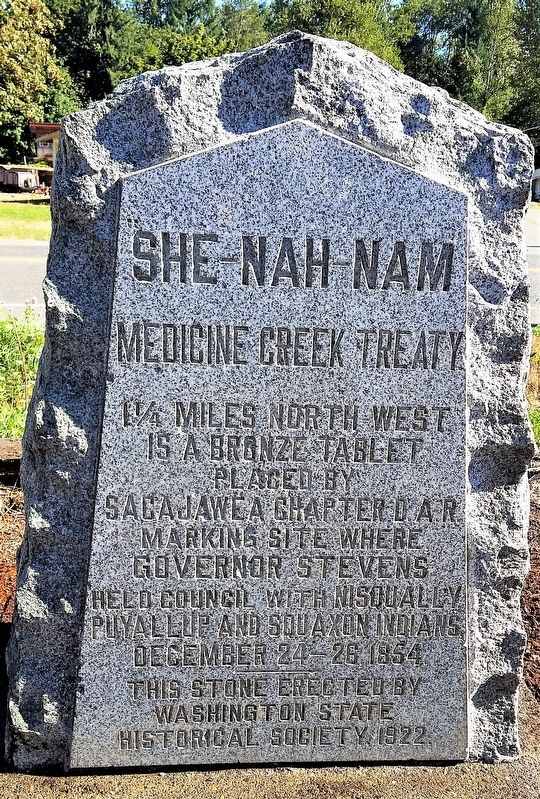 Isaac Stevens (1818-1862) served as the first governor of Washington Territory and led the treaty proceedings. 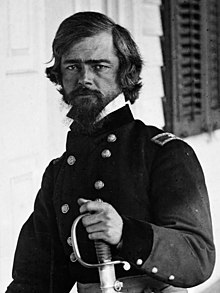 During the 19th century as the United States expanded west, tension and conflict were inevitable between Native Americans and the federal government. In order for the country to grow, settlers had to move into tribal lands, and the only way to do this was for the federal government to seize tribal lands by force and through treaties. This is what happened throughout the country and, of course, in Washington, which was created in 1853 as a territory (it became a state in 1889). President Franklin Pierce (1853-1857), appointed Isaac Stevens as governor of the new territory. He knew Stevens from the Mexican-American War (1846-1848). Among his responsibilities as governor was to oversee relations with Native tribes and, ultimately, relocate them to reservations. This effort was necessary after the passage of the Donation Land Act of 1850, which encourage settlement of the Oregon Territory (at the time, the territory consisted of present-day Washington, Idaho, and parts of Montana and Wyoming).

What appealed to the tribes who lived in the Puget Sound also attracted settlers. The lands of the region were full of natural resources, including 4,000 square miles of fertile farmland. Another factor was the desire to survey the region for a possible railroad route to the Pacific Ocean. Stevens was in fact trained in engineering and was well suited for this purpose, publishing his findings in 1855 and 1860.

Stevens called for a meeting with representatives of the tribes in the Winter of 1854. The tribes present included the Puyallup, Nisqually, and Squaxin Island tribes. The parties met over a 37-day period and signed the treaty in late December. According to one historian, before the gathering, Stevens recognized how important fishing and hunting were to the tribes. Stevens believed that allowing them to continue these activities in their traditional lands was the only way they were going to sign the treaty. Additionally, he realized that the government would be less responsible for providing food to them if they could find food themselves, and that new settlers would need workers. As noted above, these concessions were included in the treaty. Despite this apparent understanding of tribal needs, Stevens conducted the proceedings quickly and was sent to the U.S. Senate. Three other treaties with tribes in western Washington were signed in 1855.

However, not all of the tribes accepted the treaty. Many rejected the loss of the vast majority of their traditional lands. One tribal leader, the Nisqually Chief Leschi apparently did not sign it, despite an "X" being next to his name (the authenticity of the X is disputed). Leschi encouraged other tribes to not negotiate with Stevens, whom he considered untrustworthy. After several months of increasing tensions, the war began in October 1855 when a militia and a group of Nisqually fought in a skirmish that resulted in the death of two militiamen. The militia was tasked with capturing Leschi and another chief. Several other skirmishes occurred in the coming months, with the final one taking place in March 1856. Leschi was eventually captured in November and tried for murder of a militia member. He was ultimately sentenced to death by hanging. The grisly event occurred on February 19, 1858. His death was controversial because there was disagreement about whether he should hung for killing a man during a war (the supporting evidence for the alleged murder was unclear as well). Leschi was finally exonerated in 2004.