The radio telescope is located at the Arecibo Observatory in Puerto Rico. One of the events that made the Arecibo radio telescope gain historical significance was appearing in movie scenes in 1995 and 1997. Angel Ramos is an important person for this place, because a foundation was made in his name that presents the history of the Arecibo observatory and his scientific contribution. Other important figures include Cornell University, the Cambridge Air Force Research Laboratory, and the Agency for Advanced Research Projects because they contributed to the construction of the Arecibo Radio Telescope. The radio telescope is important because it can see through dust and gas and it allows to see galaxies and black holes. The place where the radio telescope is located is accessible to the public as adults, children’s and seniors. Also, schools and special groups can call for appointment.

In this image we can see the spherical antenna and its receiver that is in the air held by 18 cables which are supported by three towers.

This is actually the Arecibo Observatory where we can find an astronomy exhibition, a soueviner shop, and a picnic area. 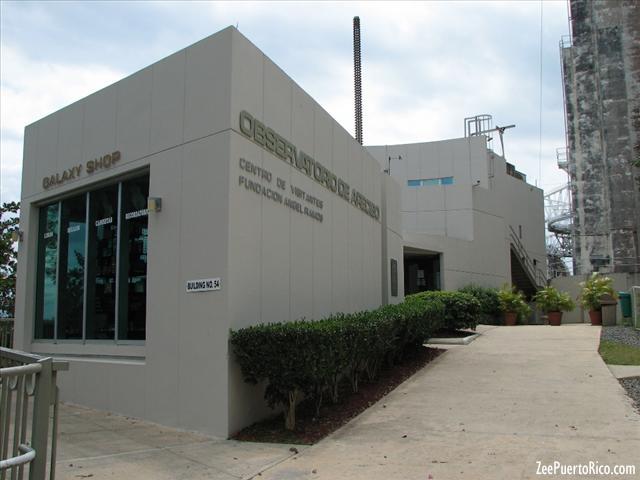 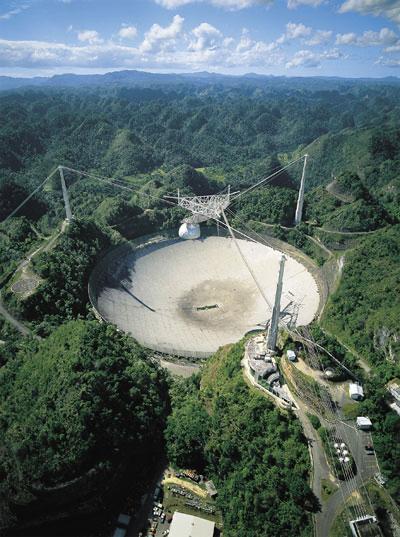 The Arecibo Radio Telescope built in Puerto Rico between 1960 and 1963. It was built in Puerto Rico due to the position of the island near the Equator. It was decided to be built in Puerto Rico, because it is an instrument with a huge diameter, so it cannot be pointed in one direction easily. Cornell University, the Air Force Cambridge Research Laboratory, and the Agency for Advance Research Projects of the United States Department of Defense participated in its construction. In the 90s it was modified. The Ángel Ramos museum was opened; it presents the history of the Arecibo Observatory and its Radio Telescope. It also offers information of the contribution to scientific knowledge that the functions of the Radio Telescope made. The other place that had been chosen to build the radio telescope was Hawaii, but they ruled it out, because its terrain is volcanic. Volcanic terrain could affect the radio telescope. Returning to Puerto Rico, his terrain was the best. The north side of Puerto Rico is the perfect place to build a radio telescope. The terrain is karst; This would prevent rain from flooding the Radio Tlescope. This would be avoided, because it has sinks. These would cause the water to flow into the underground rivers. Curiously, the land where the Radio Telescope is built was formerly a tobacco farm.

The Radio Telescope is the second largest in the world; and it is the second most important of the world. It has a 305 meters in diameter, and it is made up of several panels. The Radio Telescope is almost 40,000 and are based on perforated aluminum. The panels are between 1 to 3 meters each one. The surface is above 18 cables that are attached to three towers. The reflector is in a platform that is about 900 tons; and it's suspended by 137 meters on top of the cables. It is a big great structure; it can let you amazed by seeing it presensially.

The functions of the Radio Telescope helped investigators to make a numerous importants events. With its functions, investigators can discovered the first planets outside of the solar system. In 1964 the astronomy Gordon Pettengil used the Radio Telescope to discover that Mercury rotation was only 59 days. In 1989 the Observatory got a direct image of asteroid 4769 Castalia. Also, In November 2012,  the Radio Telescope detected a phenomenon from an unknown point, was an explosion that lasted 3 thousandths of a second. The military intelligence used the Telescope to find Soviet radar installations. Amazingly, for the year 1974, some personal tried to send a message to a point in the universe. The message was expected to be answered after twenty-five thousand years later, but the response to this message occurred thousands of years earlier. The message was received in less than 100 years after its launch.

In October 2008, thanks to the Radio Telescope discovery of the first planets outside the solar system, the Arecibo Observatory is considered a historical place. In addition, it obtained a novel prize. By having this historical recognition, the Observatory can obtain federal funds; this federal funds must be to preserve the place and its structures. Actually, the Observatory of Arecibo is one of the biggest attractions of the island.

The Arecibo Radio Telescope remains an important instrument in the scientific environment worldwide. Due to its functions and capacity, the discovery of new planets, the life off planet Earth, and misterious objects may continue to be discovered. In addition, during 2017 it was very useful during the event of Hurricane María over Puerto Rico. In that date, or in days after destruction of the island by the Hurricane María it served as an essential means of communication. The Arecibo Observatory was a point for supplies arriving from the United States. After that natural event, little by little, the premises were reestablished to such an extent that a month later there was internet in it. This made it take advantage of the public internet service.