Puerto Rico has one of the most important archaeological sites of the Taíno Indians in the Caribbean. Located in Utuado and discovered at the beginning of the 20th century, the Caguana Ceremonial Indigenous Park was explored and studied by the anthropologist John Alden Mason and Dr. Franz Boas in 1914. Caguana was a ceremonial center where indigenous peoples gathered to participate in religious and social activities. The park has twelve places or areas where the Taínos placed stones with petroglyphs, a kind of art that they used to draw human faces, animals, gods, and complete human figures with zoomorphic features. They also used these places to celebrate lots of activities like religious ceremonies, political alliances, and batú; a kind of game quite similar to baseball. This park is also known for its nature, as it contains a wide variety of trees such as kapok, palms, ausubos, cedars, tabonucos, and other native plants of the island. The Caguana Ceremonial Indigenous Park is of great importance since it helped to forge the Puerto Rican identity, by knowing its formation. The place is open to the public seven days a week from 8:30 a.m. to 4:20 p.m., and it has an entrance fee of five dollars.

Monoliths painted with petroglyphs of animal figures, human faces without a body, and complete human figures with zoomorphic features. 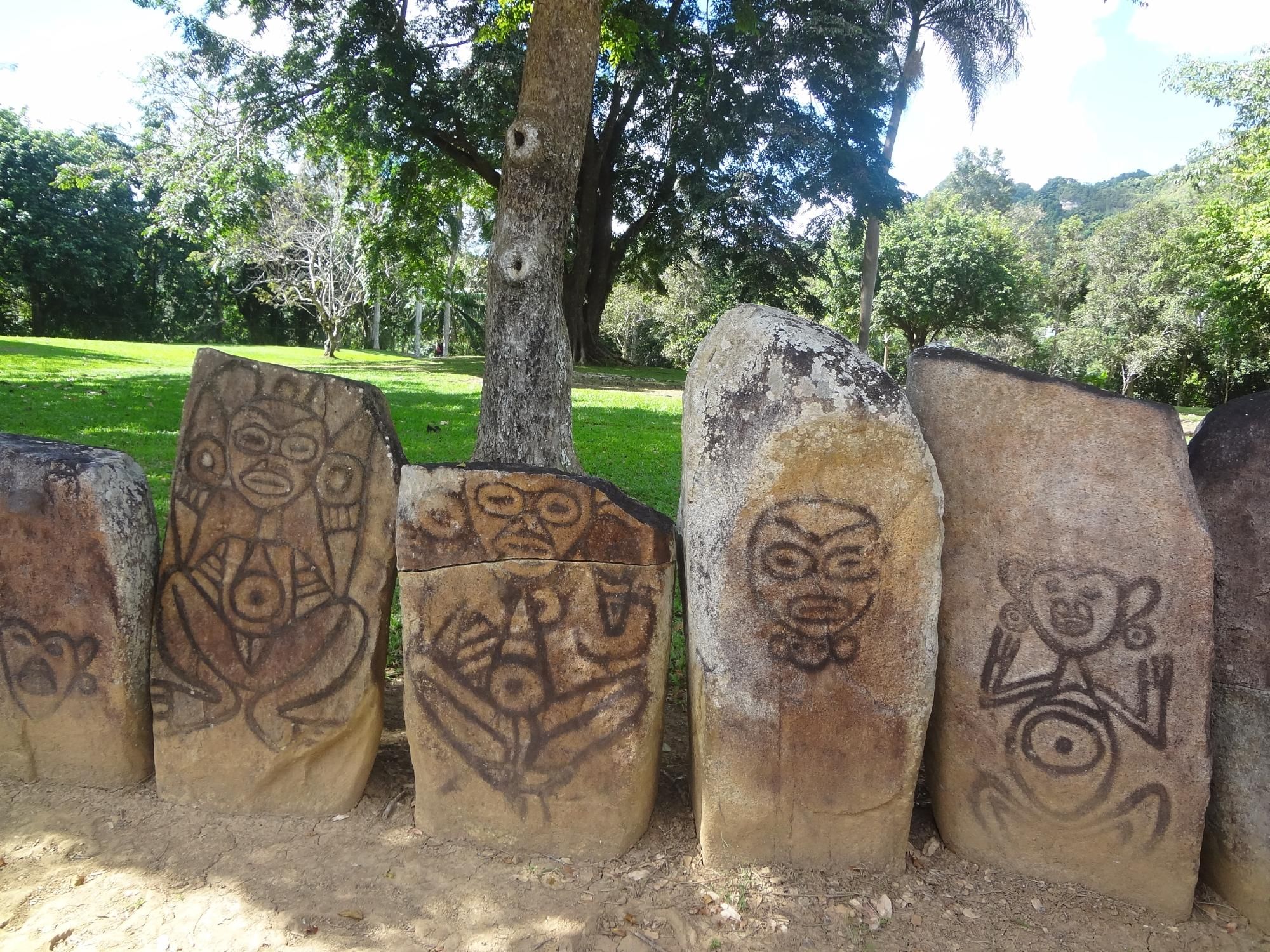 This is the horseshoe-shaped terrain where the Taínos used to celebrate their dance ceremonies. 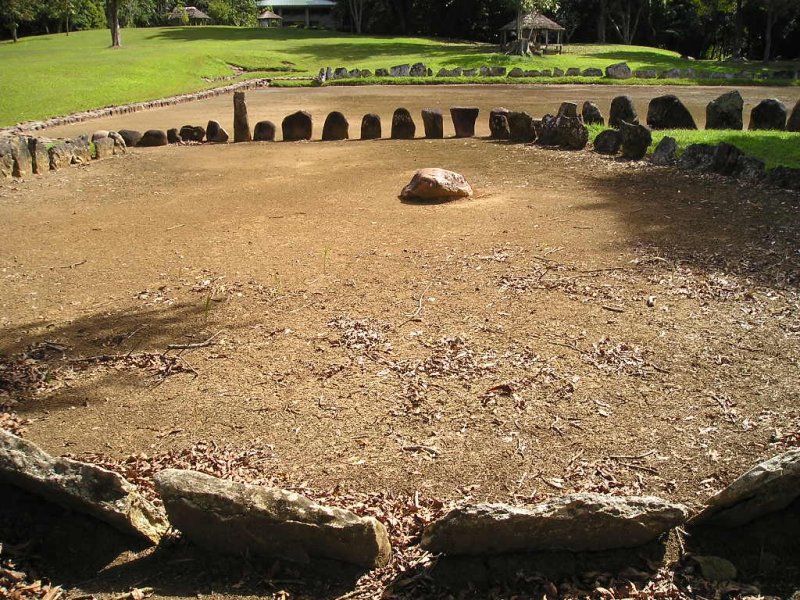 Map of Puerto Rico with the specific location of Utuado and the Caguana Ceremonial indigenous park.

Map of the Caguana Ceremonial Indigenous Park with the specific locations of the areas where the Taínos celebrated different activities. 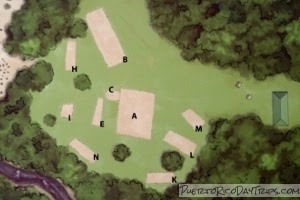 The Caguana Ceremonial Indigenous Park was discovered in 1914 at the beginning of the 20th century by Franz Boas and a group of archaeologists. It is located in the central mountainous part of Utuado, Puerto Rico. Caguana was a ceremonial place where indigenous people from neighboring towns gathered to participate in social and religious activities. It is made up of twelve terrains surrounded by a great variety of stones with petroglyphs. The different types of pottery that are found show the variety of activities that were celebrated in this park, such as ball games and “areytos”, that were cultural celebrations and religious ceremonies. Also, the park has a variety of native plants and trees that serve as decoration. The Caguana Ceremonial Indigenous Park is considered one of the most important archaeological sites in Puerto Rico; it has helped us learn important information from different aspects of the Taino culture such as their ceremonies, architecture, art, and technology.

Taínos were the first people who lived on the island of Puerto Rico before the arrival of Christopher Columbus in 1493. Some theories suggest that they were Arawaks, who came from South America and occupied most of the territories of the Greater Antilles. Eugenio Fernández (1970), described how the Taínos cut their hair in different ways, some had a shaved line, a cross and others had ornaments and drawings; they had their body painted however they wanted, painted their eyes and eyebrows with white, red and black to look elegant, to appear ferocious and to scare away their enemies. In Puerto Rico, they established a society divided in “cacicazgos” (a form of social and political organization of the indigenous communities) governed by “caciques” (leaders of the indigenous groups). They were divided in three social classes: the “nitaínos”, formed by soldiers and nobles, the “bohitus” composed of priests and doctors dedicated to predict the future and cure illnesses and the “naborías”, they were servants and members of the lower class. In general, they were all submitted to the will of the “cacique”. These social classes lived in villages where they built their cabanas or “bohíos” (houses made of straw, wood, and leaves) equipped with hammocks, chairs made of stone and other utilities. Their agriculture was based mostly on the production of “yuca” which provided flour to make a bread called “casabe”. Also, Taínos used to hunt, fish, and collect forest fruits that today are still consumed by Puerto Ricans. Furthermore, religiously, they were polytheistic and represented the deities in figures. They celebrated “areytos”, in which the dancers chanted a monotone song to teach children about the “caciques,” the tribal traditions their national legends (Brau, 1983). Culturally, they celebrated “batú”, where two teams of women and men played together kicking the ball with the shoulders, arms and legs in a place that was divided in half with a line. In general, the Taíno people were a hierarchical society where women, men and children had their respective tasks, following the orders of the “cacique”, until the arrival of Christopher Columbus in 1493, an event that changed everything.

The Caguana Ceremonial Indigenous Park is composed of monoliths, petroglyphs, and different types of structures. Monoliths are rocks that contain the engravings of Puerto Rico's ancestors, they weigh more than a ton and were brought from the Tanamá River. Petroglyphs are an art technique that Taínos used to express their history and thoughts about the origin of the universe. Among these engravings are found animal figures, human faces without a body, and complete human figures with zoomorphic features that could symbolize ancestors linked to the “areytos” that were carried out there. The Caguana Park consists of one large central square, and eleven smaller areas of various dimensions. The central square measures about 160 feet long, 120 feet wide and is where people can find most of the petroglyphs. The Puerto Rican Institute of Culture, with the help of Ricardo Alegría, acquired and restored this valuable place and preserved its natural flora. Some of the trees and plants that are in danger of extinction and are native to the island include ceibas, ausubos, capas, tabonucos, royal palms, and cedars. Alegría with other colleagues also re-created “bohíos” and other elements of the era of the Taínos to bring a more accurate picture of how the park may have looked in the past.

The Taínos celebrated different kinds of ceremonies and cultural activities in Caguana. The ceremonies, called “areytos”, took place in the central square. Within this area, there is a horseshoe-shaped terrain that was used as a dance area. Towards the northwest of the park a set of mountains with the appearance of a three-pointed “cemí” is visible. The “cemí” is a kind of structure that represents or symbolizes one of the Taíno deities called Yocahú, the Lord of the yucca. It is also one of the most important Taíno legacies that people today in the island recognize as important to their history. According to many archaeologists, the Cemí mountain with its peculiar shape inspired the Taínos to build the park there, because they believed that their deities inhabited this mountain. The petroglyphs (an art technique that the Taino Indians used to express their history and cosmovision of life) are considered monumental “cemíes” too, which means that they are a symbol of the concept of supernatural strength and energy. According to a study carried out by Dr. José R. Oliver, “each petroglyph has a particular meaning that when conjugated narrates a mythical story about the origin of the universe and life, the importance of the cacique, and the transformation of human beings into spirits supernatural after death” (Fundación Nac…, 2015). Taínos commonly believed that the spirits of the ancestors became powerful “cemíes” who were to be worshiped.

In the Caguana park, the Taínos celebrated other cultural, scientific, and recreational activities that distinguish this site from others like Tibes (another park with archaeological findings of Taínos). For example, they used to play “batú”, a game where two teams of women and men played together kicking a ball with their shoulders, arms, and legs in a place that was divided in half with a line (Fernández, 1970). The smaller areas were used as practice fields, while the medium-sized one was the main ball field. Also, Taínos studied the positions of the stars, the phases of the moon and the sun to perform their rituals and manage agriculture better. Experts like Salvador Brau had mentioned that the Caguana park was the house of Guarionex, one of the most important “caciques” of Taíno history. This inference prompted experts to think that in Caguana, the Taínos performed political alliances, produced rudimentary elements, celebrated negotiations with neighbors and participated in other social activities.

According to many experts, the Caguana Ceremonial Indigenous Park remains one of the most important discoveries of Puerto Rican and Caribbean archaeology. Many investigations show that this archaeological place, originally known as Capá, was inhabited for just over 300 years and it was populated from around 1000 AD until around 1450 AD, when it was abandoned and left behind for unknown reasons. The size of its terrains and the quantity and quality of its petroglyphs make this place stand out among comparable sites. Caguana was a place where the Taínos performed the important recreational activity of “batú,” and where they held the “areyto” religious ceremonies to share spoken history in addition to other social activities. The Caguana park is the only one of its kind with such rich evidence of archaeological, historical, and cultural aspects. The place receives thousands of visitors a year, both local and foreign. Thanks to all its components, Caguana Ceremonial Indigenous Park is an important site that is a critical part of Puerto Rican cultural heritage.