The structure was built in 1955 in order to acquire Black sugar from the center of Puerto Rico for export to the United States, where white sugar was made and returned to the island. The sugar plants closed in 1976, and then the pier was reused to export aggregates and construction materials to other islands in the Caribbean. The height of its oceanfront bridge is approximately 80 feet, and the structure reaches to a depth of approximately 60 feet from the last platform. The pier, with its deterioration over the years, is dangerous to walk, so people suggest that it be seen from the stable surface that remains at its entrance. Its historical structure and depth overseeing clear waters make this old sugar dock a beautiful tourist attraction.

The use of the Sugar Pier in Aguadilla began in 1965. 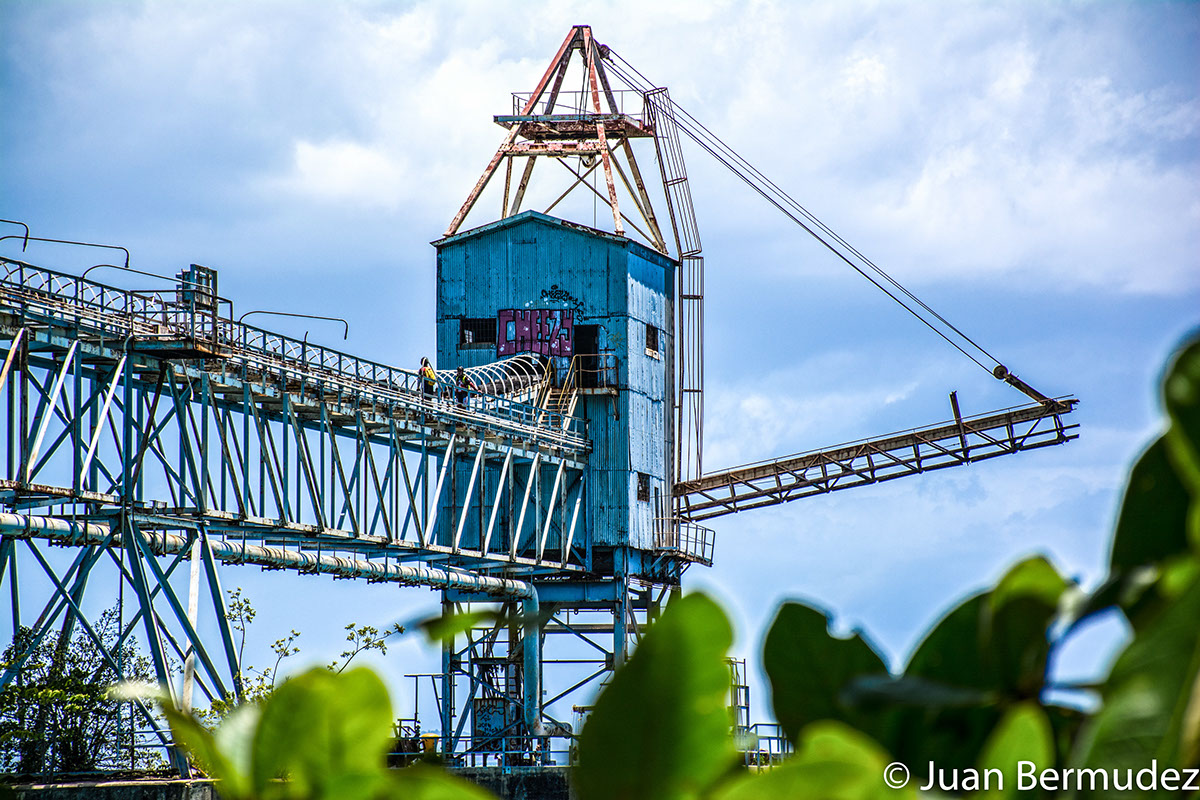 The growth of the Puerto Rican sugar industry began to falter in the 1910s due to the threat of free market in the U.S. after the passage of the Underwood-Simmons Act in 1916. 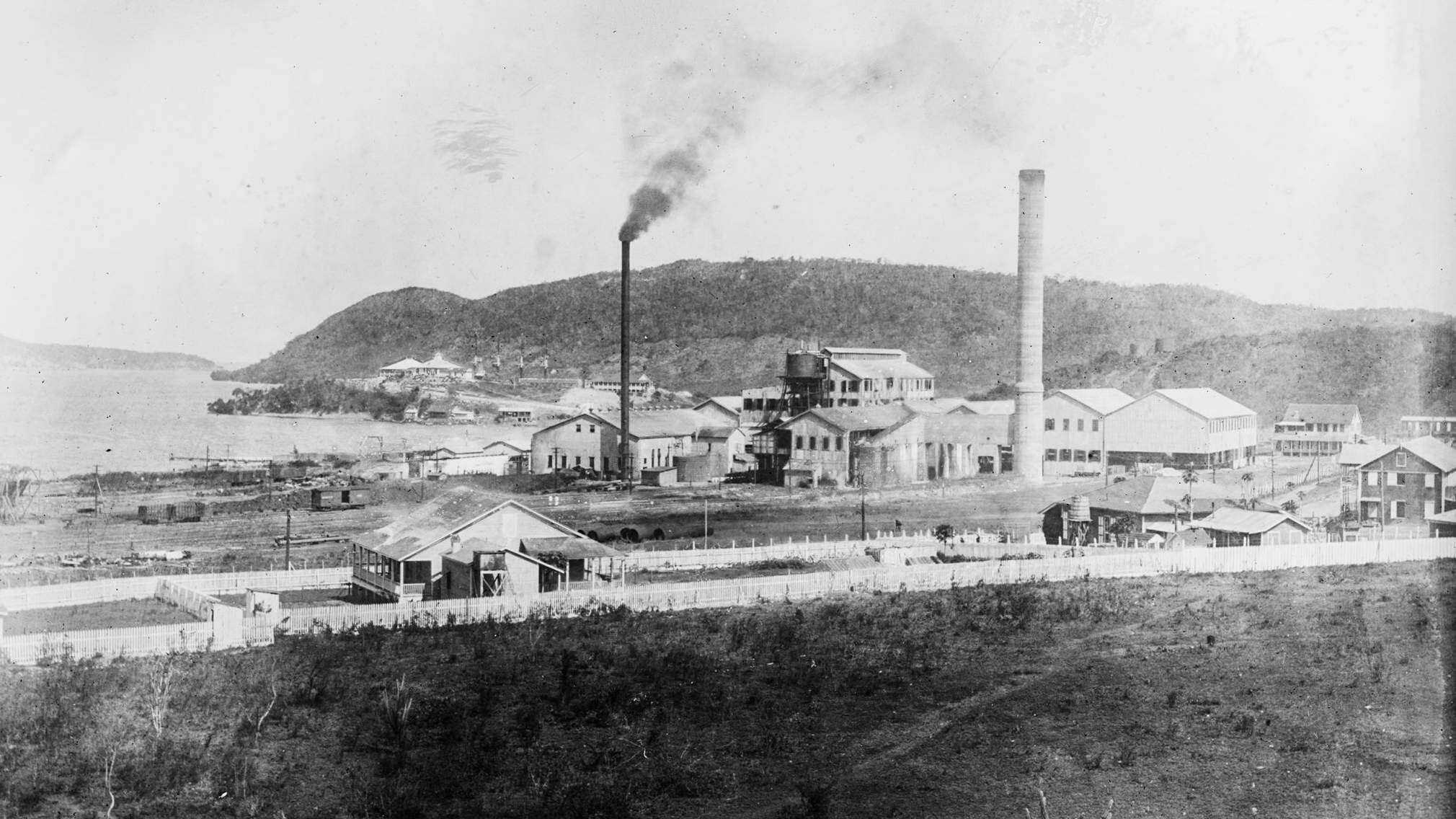 Sugar Pier in Aguadilla was built in 1955 in order to acquire Black sugar from the centers of the area for export to the United States. 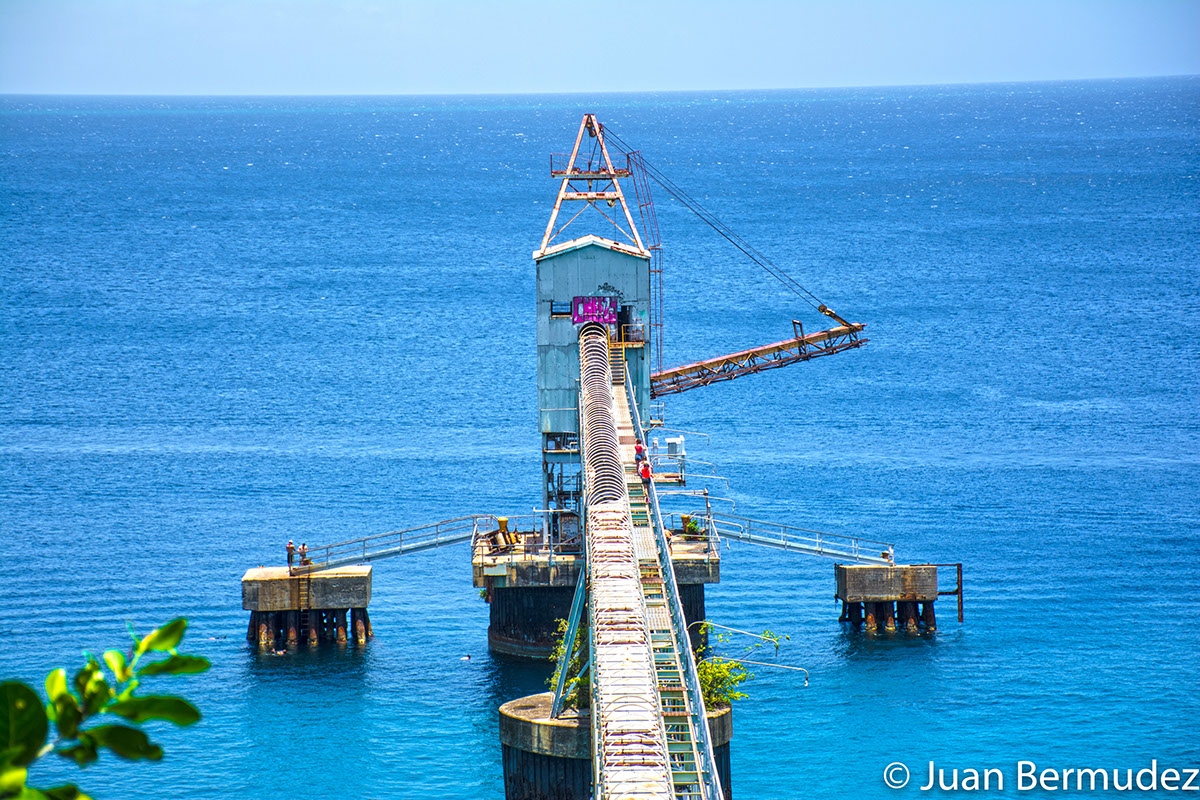 From the end of the 18th century to the middle of the 20th century, the sugar industry fueled the most outstanding economic activity in Puerto Rico. 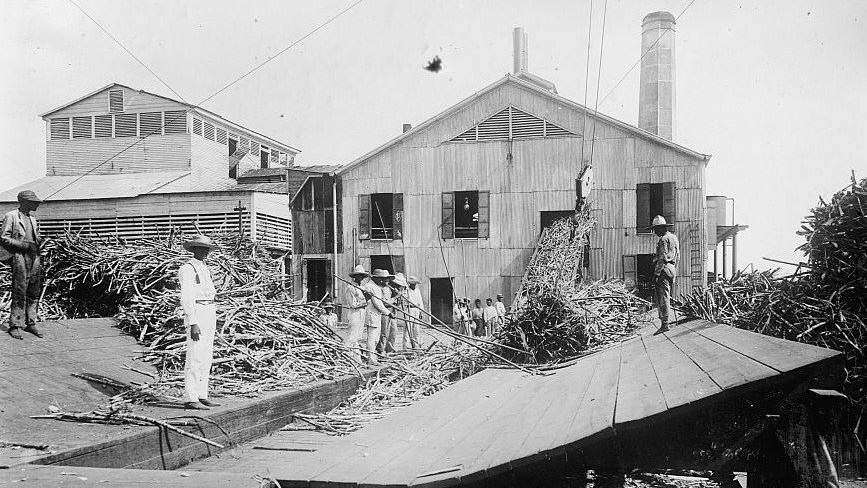 The abandoned sugar mill and bank-owned 30 acre property including private pier is currently for sale. 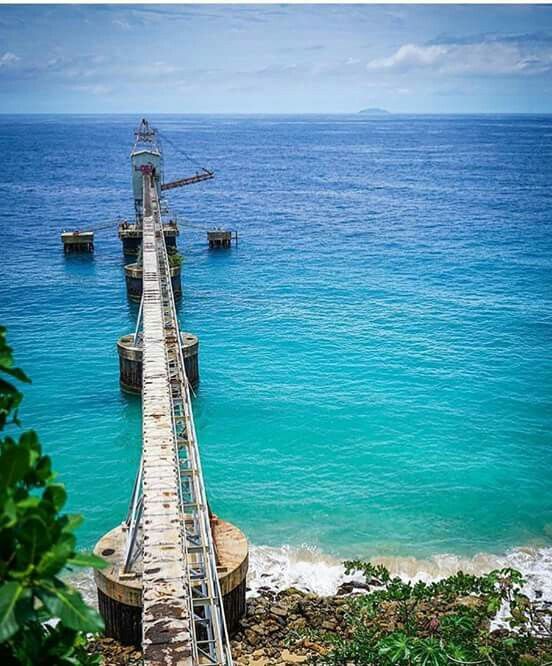 The Sugar Pier in Aguadilla was in operation until 1972. 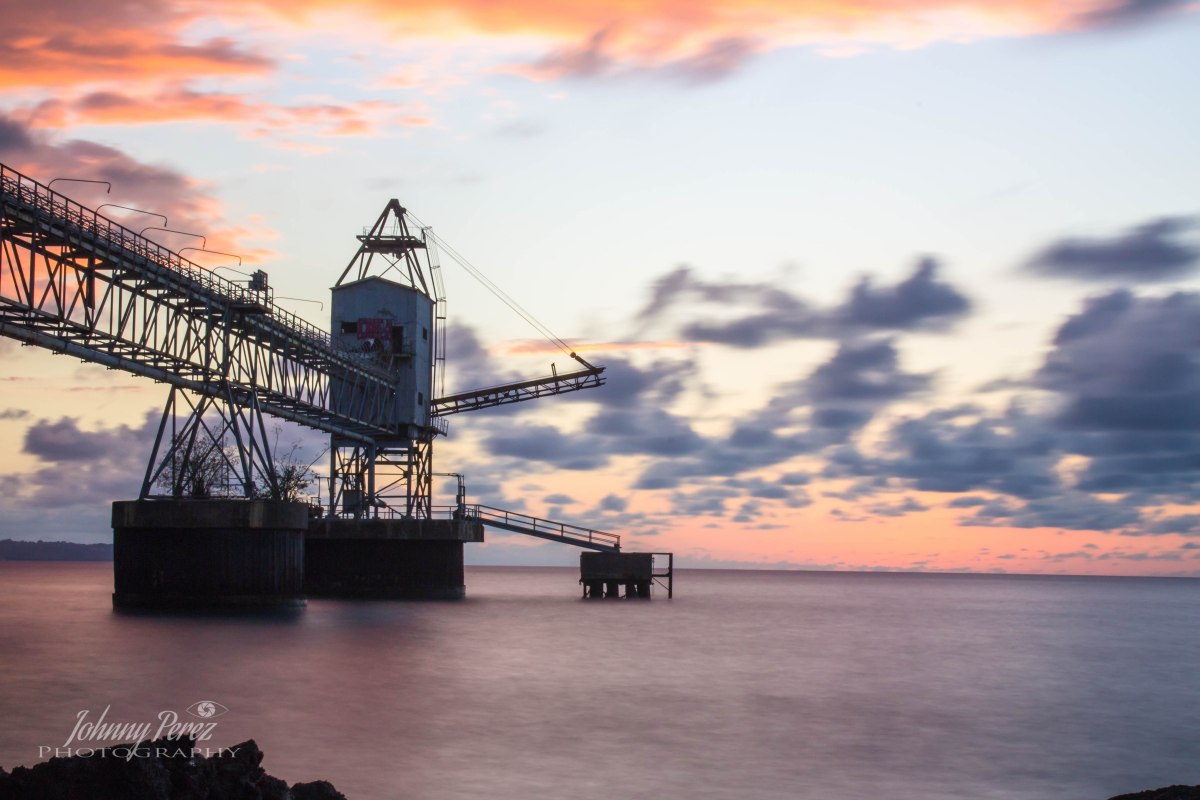 The Sugar Pier in Aguadilla has gained popularity on social networks for its panoramic and attractive views. 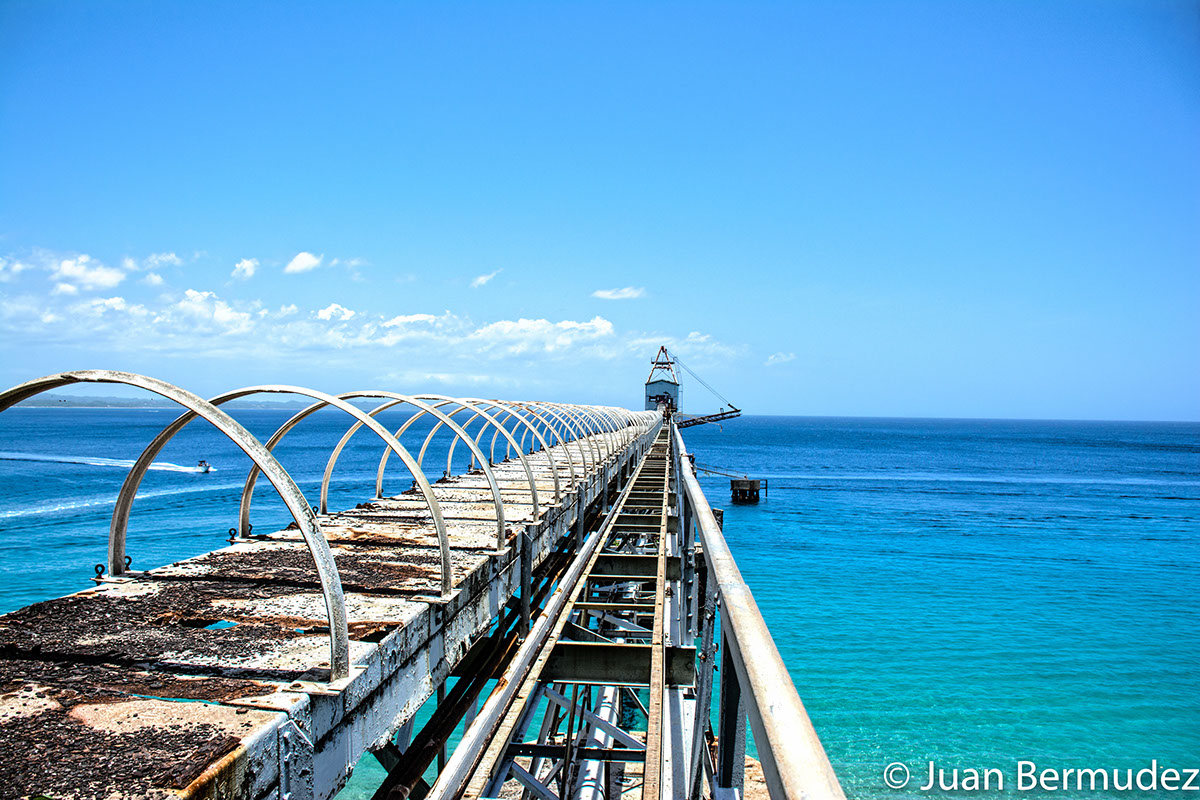 The height of the Sugar Pier is approximately 80 feet tall. 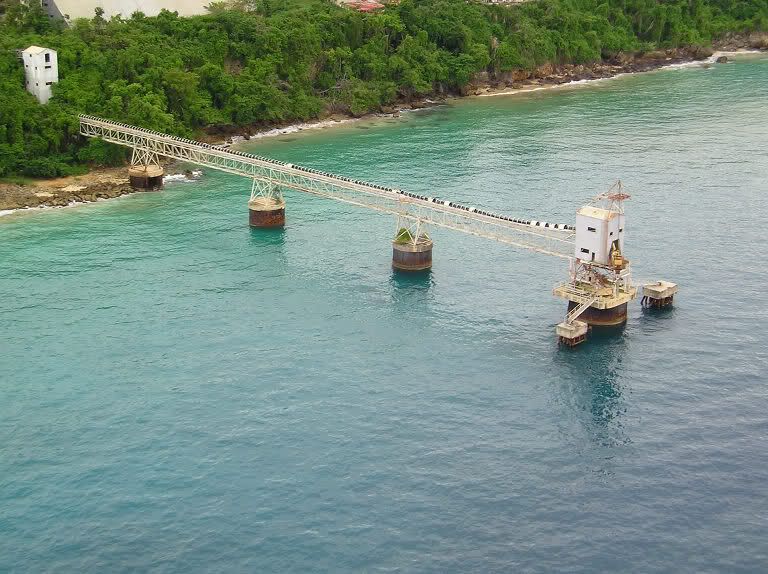 Puerto Rico was one of the most important countries to export and produce sugar, after Cuba. The sugar industry was the most outstanding economic activity in the country from the end of the 18th century to the middle of the 20th century. The investments of companies operating to serve the American east coast developed the industry in Puerto Rico to obtain great economic gains. Traditionally, the country cultivated sugar crops and a wide variety of subsistence crops, providing work which occupied most of the population. The sugar industry on a large scale in Puerto Rico ended in the 20th century in the midst of a series of financial issues affecting agriculture, labor, and commerce. When funds became insufficient to mechanize and modernize the process of production and export, the pier fell into disrepair.

The 1840s and 1850s was a period in which the demands of the international market put enormous pressure on the economies of Cuba and Puerto Rico, and specifically on all the sugar exporting regions. In 1850, the demand for sugar increased, and that was favorable for producers. However, after an intial boom, sugar prices were affected and stalled in the period leading up to1856. During this period, producers saw a severe reduction in profits. At this difficult time, producers also had to adapt to the new demands of the world market. Cuban planters responded to new challenges by accepting the circumstances that occurred and investing in mechanization and modernization. They remained competitive by increasing through expansion, but the planters in Puerto Rico became the victims of a sustained financial crisis marked by stagnation and decline. Without the opportunities for investment, Puerto Rican planters were unable to respond to the demands of the world market in the mid-19th century and saw thier sugar industry abruptly decline.

The Coloso Central Sugar Mill, known as the Central Azucarera Coloso on the island, was a moderately low-capacity sugarcane refinery in Aguada, Puerto Rico that was established in the late 19th century. In 1958, the Coloso Mill got the permits and approvals to build a pier in Aguadilla for the production and exportation of sugar and honey to the United States of America. The use of the Sugar Pier for the cane industry in Aguadilla began in 1965. Unluckily, the demand was not as high as producers had expected, and other refineries in Puerto Rico had higher demands for sugar than the Coloso Mill in Aguadilla. The exportation levels decreased in Aguadilla, and the owners decided to close the Coloso Central Sugar Mill in 1972.

Puerto Rico's sugar producers spent 26 years trying to save the industry but ended up with $1.2 billion in losses. Afterwards, former cane growers, mill operators and employees worked with the government to find ways to keep the mills and refineries in use. Unfortunately, the government found little practical use for the mills that had gone out of production, so the locations of the industry that had fueled Puerto Rico’s economy were left to rust and collapse in abandonment. For the hard working jibaros, the countryside people who farmed the land in a traditional way, who had dedicated years of hard labor to the sugar industry, the loss was devastating. In a good harvest, they had processed 12 million tons of sugar cane into 1.3 million tons of sugar per year. The sugar industry not only moved the economy, it also employed 93,000 people and supported thousands of families. Yet, despite the profits that this industry had produced, the cane workers had always earned low wages and lived in poor conditions. As the industry collapsed, many workers and their families found thier situations unbearable.

The sugar industry was very important for the economy of Puerto Rico. The cultivation of sugarcane and the production of sugar largely shaped the local and international role of Puerto Rico. The Sugar Pier in Aguadilla was part of the growth of the country's sugar industry, and stands as a memory of the work that was carried out at the Coloso Central Sugar Mill for many years. Although, there have been many proposals for the reopening of Aguadilla’s Sugar Pier, investors have always decided to put their money in other projects. Due to the lack of economic resources and sustainable management, the Sugar Pier can’t be reopened as a tourist attraction and the state of its disrepair means that it can't be activated as a working pier. Consequently, the Sugar Pier in Aguadilla remains in an abandoned state. It is filled with trees and debry and the deterioration of the structure is very noticeable. It remains, however, a symbol of an industry that once defined the island.