Vieques, better known as "the baby island", is an island municipality located in the east of Puerto Rico, just off the coast of Humacao. The people of Vieques have been the victims of more than six decades of the practices and experiments of the United States Marine. On April 19, 1999, a bomb had been dropped by mistake and had caused the death of the Navy guard and citizen of Vieques, David Sanes. This was the trigger for the awakening of all the people of Puerto Rico, provoking the creation of various liberal movements and a struggle to get the Navy out of Vieques. "Peace for Vieques" was a movement of the utmost importance; as it reflected the unity of the Puerto Rican people regardless of political, religious, and civil sectors. No one specific location was the focal point for this historical movement, but Caracas Beach, called "Red Beach", was the place where military practices were often done. One of the pillars for the struggles against the Navy was the pro-independence politician, Rubén Berríos, who fought for the freedom of Vieques at great personal risk. After many struggles and protests, on May 1, 2003, the Navy officially announced its departure from Vieques.

In this image, you can observe two men being arrested for civil disobedience. The man without the cap is the pro-independence political, Rubén Berríos. BerrÍos was a key player in the fight against the Navy. 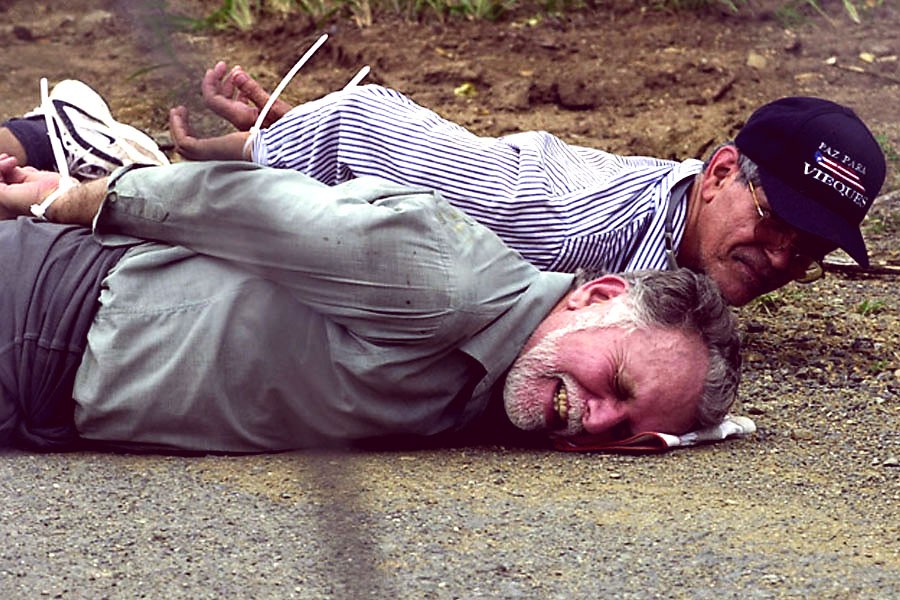 This image shows the design of the shirts used during the manifestations of the "Peace for Vieques" movement. 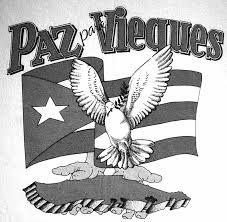 This image shows the occupation of the Navy (marked in red) in the eastern and western parts of Vieques.

The unions of different ideological, political, and civil sectors were pillars of the "Peace for Vieques" movement to get the navy out of the island. This movement promoted hope for the people of Vieques and an opportunity to end abusive military practices and experiments of more than six decades. Other reasons for the struggle were the social, economic and political injustices that greatly affected the residents of Vieques. However, the purpose of the movement, "Peace for Vieques," was primarily to get the navy out of the island, and activists esentially saw this as a way to achieve freedom and equality for the prople of the island municipality. As a method of resistance, different types of propaganda were made to not only promote the peaceful movement but to give a voice of power to the people of Vieques. After a long time, the island municipality achieved victory, and a conditional peace. However, the future of Vieques was uncertain, and the conditional resolution left some limitations due to the social, political, and economic conditions that were still experienced after the departure of the Navy. Yet, regardless of some continued concerns, through the unity and commitment of the people, a victory and a legacy for the history of Vieques were achieved.

Before the "Peace for Vieques" movement emerged, the island was experiencing colonial treatment and being used for military experiments. For over 60 years, the United States Navy used Vieques for political and economic purposes. During all those decades, the Navy occupied the eastern and western areas of the island to conduct its airborne practices and scientific experiments. This caused social, cultural, economic and political problems in Vieques. The Navy often promised the Vieques residents that they would gain from beneficial development of the island, but such benefits were not apparent to residents. The decisions and actions of the Navy during its years of occupation caused a crisis in the economic capacity of Vieques linked to fishing and agriculture. One report on the struggle to clean up the environment describes the constant struggle as "The navy bombed Vieques from air, land, and sea." (McCaffrey, 2009). In addition, the toxic waste produced by military experiments led to an alarming increase in diseases such as cancer and respiratory problems. Moreover, on the coasts of Vieques, ammunitions and active bombs were used, affecting the safety of the residents. But what prompted the mass activism of the people of Vieques was the death of the island citizen and civil guard David Sanes. On April 19, 1999, a careless aerial practice caused two 500-pound bombs to end Sanes' life. The death of David Sanes and problems related to the health, human rights, and the quality of life of the citizens in Vieques, caused the emergence of a fight to get the Navy out of the island.

During the process to get the Navy out, people from Vieques began to look for strategies to express their feelings. The fight against the destructive presence of the United States Navy for the recovery of the lands that were expropriated from them more than half a century ago unified the will of the residents of Vieques. Multiple political allies responded to a call for urgent but peaceful protest and from there, several organizations joined, such as Alliance of the women of Vieques, Committee for the Rescue and Development of Vieques, and other major organizations. With the union of various political, ideological and civil sectors, activists began to build a powerful movement to fight against military force that became collectively known as "Peace for Vieques." The pro-independence politician, Rubén Berrios, was an essential figure for achieving victory. The leading role of this one politician inspired several political groups to join the movement. The most common methods of expression in the Vieques protest were banners, the voices of the people, musical instruments, and slogans worn on clothing. The people of Vieques opted for a passive protest method by wearing t-shirts with peaceful but political messages. One example of a popular T-shirt design included a dove, the flag of Puerto Rico, and some hands holding Vieques. Due to the great spread of the different manifestations and the unity of the people, the "Peace for Vieques" movement won a victory over the United States Navy and put an end to a decades of social injustice and inequality.

On May 1, 2003, the Navy officially left Vieques and brought a new beginning for the residents of the island, but their future was still uncertain. Although the Navy left buried bombs and had contaminated the soil and seabed, they never fulfilled their obligation to clean up the island municipality. Also, many activists believe that they used the idea of contributing to the cleanup as an excuse to stay in the east and west area of Vieques. The eastern and western areas remained the most deserted and contaminated parts of the island. Furthermmore, many believed that the United States Navy used the cleanup situation to get political and economic benefits. During the continued partial occupation by the Navy, the people of Vieques continued to fight for good health and human rights. In addition, they also sought alternatives for economic, political and social recovery of the island municipality. Ultimately, the "Peace for Vieques" movement became the expression of a people tired and angry about continued injustices. It enabled the people of Vieques to unite around a common goal, and in their successful fight against the Navy, the people of Vieques became role models and inspired others to fight for their freedom, for their rights, for respect, and for equality.

The purpose of the "Peace for Vieques" movement was one of achieving freedom and bringing peace to the people of the island. Although the fight to eject the Navy from Vieques was victorious for the people of the island, their battles with ongoing disease, safety concerns, and economic fallout continue. The success of the peaceful movement was due, in great part, to the union of activism under one ideological, political, and civil objective with the support of several liberal organizations and influential leaders. The prolonged manifestations gave the people of Vieques not only hope, but a voice. The "Peace for Vieques" movement left a legacy and a message of hope. It continues to educate and inspire future generations in the pursuit of equal rights and respect for life. The people of Vieques and their allies managed to get the Navy out of the island, and, in the end, victory was not determined by the strength or size of the opponents, but by the heart and unity of a people willing to fight for shared beliefs and the greater good.

McCaffrey, K. T. (2009). Fish, wildlife, and bombs: The struggle to clean up Vieques. NACLA Report on the Americas, 42(5), 35. Retrieved from https://nacla.org/article/fish-wildlife-and-bombs-struggle-clean-vieques