Constructed in 1879 by J. Lowenthal, this building previously served as a gallery space and has been home to Eureka Books since 1987. This local bookseller is one of the few remaining purveyors of rare and historic books in the region. In addition to the rare books, the store offers a wide range of new and used books and special events for book lovers. The facade offers one of the most unique architectural designs in Eureka's Old Town Historic District while the interior features ornamental plasterwork that is original to the building.

The J. Lowenthal Building is currently home to Eureka Books, established in 1987 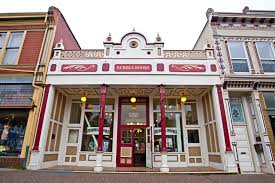 The J. Lowenthal Building is currently home to Eureka Books, established in 1987 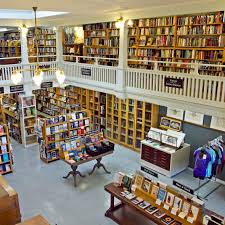 Constructed in 1879 for J. Lowenthal, this building was designed by C.J. Wall and built with local brick by Johnson & Wilcos construction company. At the time that the property was built, it was described as both Corinthian and Elizabethan. Among the building's more fanciful elements, a false front parapet was used as a decorative element on the roofline to draw one's eye to the facade.

A row of colorfully painted cast iron supporting columns create an open porch area, in front of the recessed shop entrance. The cast iron used in the columns was produced locally by the Eureka Foundry (owned and operated by T.J. Lannigan in the late nineteenth century). The building's columns represent one of the few remaining examples of locally cast iron that was used for architectural purposes in what is now considered Eureka's Old Town Historic District.

The interior of the building features ornamental plaster that dates to the era when the property was built. Currently the home of Eureka Books, the interior now features thousands of new and used books for sale, in addition to rare finds. The historic bookstore, which moved into the J. Lowenthal building in 1987, is known as one of the few remaining professional antiquarian booksellers in the region. Along with books, the shop also sells prints and posters by local photographers and artists.