The Cry of Lares

Lola Rodríguez de Tió's flag for Lares. This 150 year-old flag was exhibited at the University of Puerto Rico in 2018. 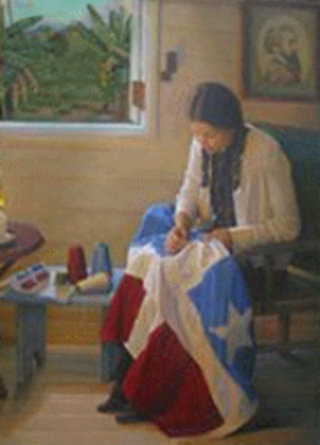 The Cry of Lares was a movement that tried to get Puerto Rico’s independence from Spain. The movement happened in Lares, Puerto Rico and started with "a brief but dramatic rebellion against Spanish rule" (1). It was meant to gain justice for Puerto Ricans who were treated unfairly and exploited, for example, Puerto Ricans worked hard in agriculture yet were unable to sustain themselves with the little produce they were permitted to keep. The Cry of Lares is better known by its Spanish name on the island: El Grito de Lares. "In the 19th century, in Latin America, the expression grito – literally a shout or outcry – was used as a synonym for a declaration of independence." (2). When Puerto Ricans decided to stop Spanish injustice, they decided to plan a movement that would serve as thier grito. Ramón Emeterio Betances and Lola Rodríguez de Tió were two of the important people who were involved in the movement, and helped Puerto Ricans fight for their independence.

In 1848 Puerto Ricans had to work in the harvest for the Spanish people, but the part of the harvest that they were permitted to keep was not enough for them to eat. They had no alternative but to support themselves relying on agriculture. In additon to worker exploitation, Puerto Ricans were victims of discrimination and racism, and the political oversight of their island was often neglected. In addition, Spanish officials often tried to solve dissent by imprisonment or exile. "Tired of having their economic and political freedoms suppressed by the Spanish, they knew something needed to be done" (3). When Puerto Ricans decided that they needed to do something about Spanish mismanagement of the island, they united in a movement for independence.

Ramón Emeterio Betances campaigned for Puerto Rico’s independence, and Lola Rodríguez de Tió created a motivational song to support Puerto Ricans in their fight. Ramón Emeterio Betances was a really important figure in The Cry of Lares as he was the leader of the movement and encouraged Puerto Ricans to fight for their beliefs. Emeterio Betances is still seen as the father of the homeland in Puerto Rico which clearly shows that he had a lasting impact on Puerto Rican identity although his fight for independence at the time was not successful. Lola Rodríguez de Tió was also really important in the rebellion. Rodríguez de Tió created a flag that she sewed herself so that Puerto Ricans could march with it. The flag has embedded symbolism: the white cross in the middle represents craving for homeland and redemption, and the red rectangles represent the blood of those who had died before the rebellion. Lola Rodríguez de Tió was also responsible for composing the revolutionary anthem which called the people to unite with the words: “Puerto Ricans wake up from your dream; it is time to fight” and “We want our freedom; our machetes will bring it to us”. This anthem aimed to get Puerto Ricans motivated and ready to fight for their rights. This revolutionary anthem was used as the inspiration for Puerto Rico's current anthem and the melody used in the original anthem remains the same in Puerto Rico's current anthem.

On September 23, 1868, over 600 Puerto Ricans gathered in Lares to fight for their rights and their independence. Ramón Emeterio Betances and many Puerto Ricans had originally planned for the march to take place on September 29. However, someone informed the Spanish about the plan and sabotaged the preparation. As a result, participants were forced to hurry the march that was once planned to be on September 29 to September 23 even though they were not fully prepared. Even though the March had to be hurried, over 600 Puerto Ricans appeared in Lares ready to fight on September 23. The Cry of Lares was the first movement ever to have so many people involved. This is why The Cry of Lares is considered very important as it shaped Puerto Rican memory and showed that unified movements against opression could have a dramatic impact. This is something that Puerto Ricans never forgot.

Puerto Rico at the Dawn of the Modern Age: Nineteenth- and Early-Twentieth-Century Perspectives, Library of congress. Accessed May 7th 2020. https://www.loc.gov/collections/puerto-rico-books-and-pamphlets/articles-and-essays/nineteenth-century-puerto-rico/rebellion-of-1868/.