The San Cristobal Canyon is located on a 3.4km trail that runs between the towns of Aibonito and Barranquitas. This Canyon was formed by the erosion caused by the waterfalls. Sadly, it was used as a landfill from 1954 to 1974, but in 1978 the Puerto Rico Conservation Trust decided to make it a natural protected area. Despite the lack of emphasis on the conservation of this area during the 1900’s, the Canyon is very substantial and has geographical and ecological importance. San Cristobal Canyon is home to 696 species of flora and 144 species of fauna, and it is the deepest Canyon in the Caribbean. San Cristobal Canyon has some challenging and difficult routes, therefore, tour guides are necessary to make the journey a much safer and easier one. Becasue the region is a protected area, accessibility may vary and some access routes can be used by permission only.

San Cristobal Canyon's blue lagoon where you can swim. 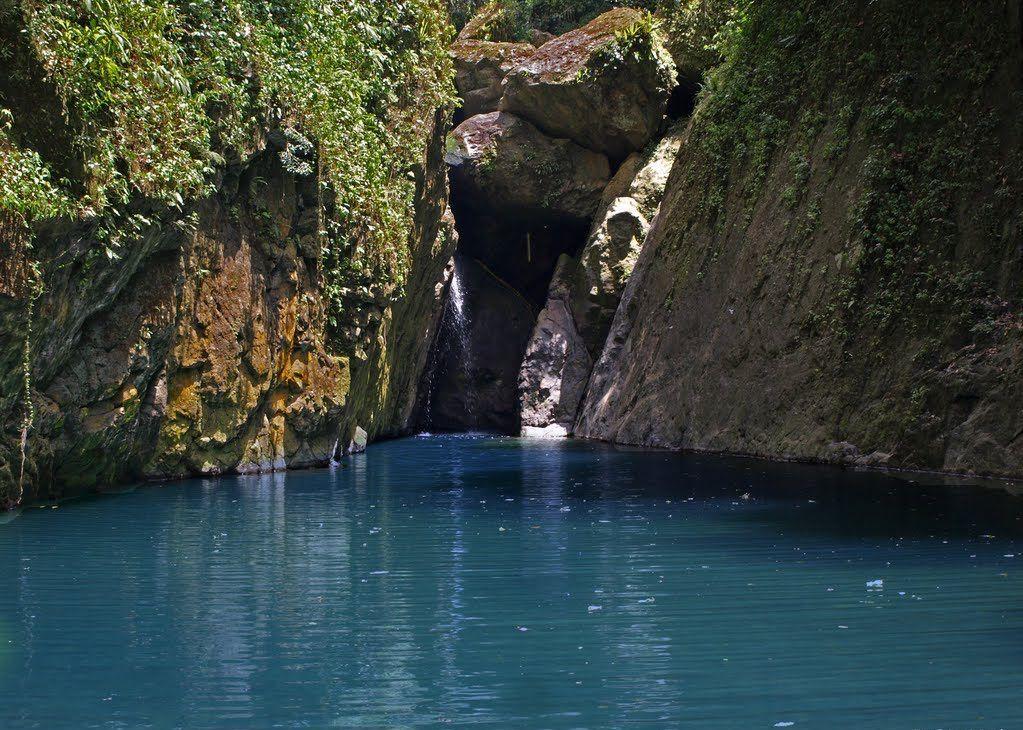 The water falling into the Canyon. 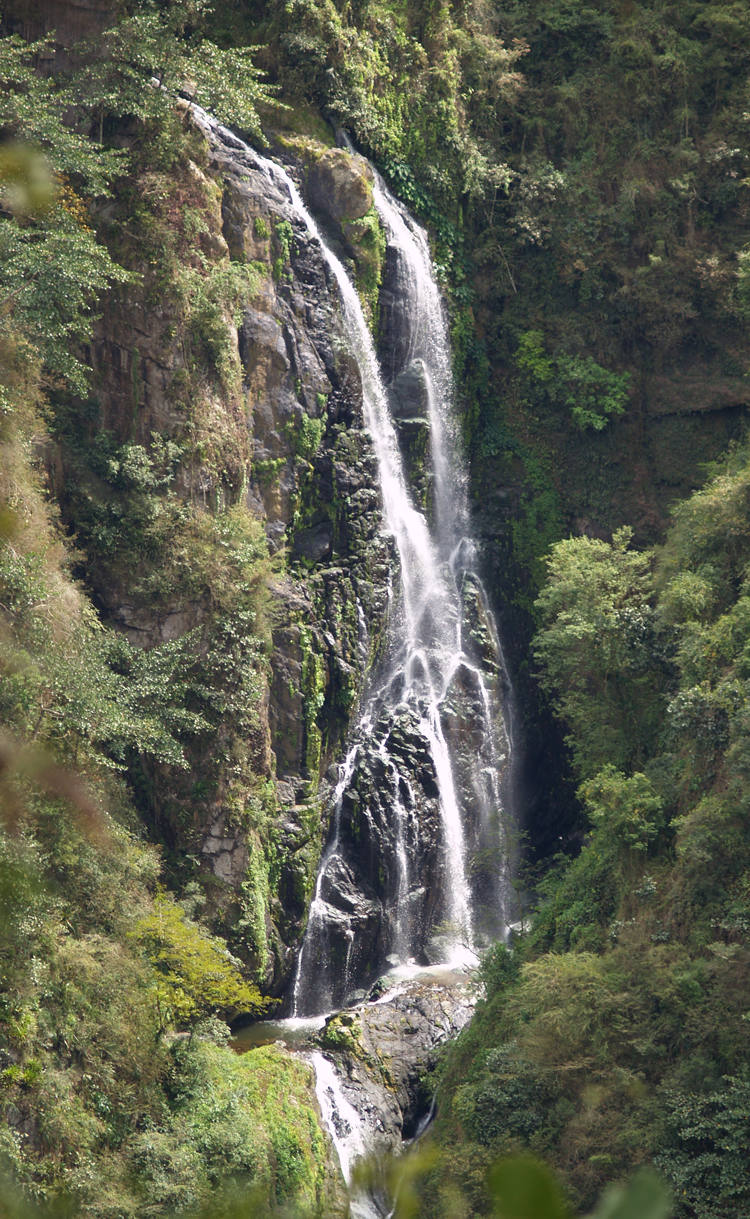 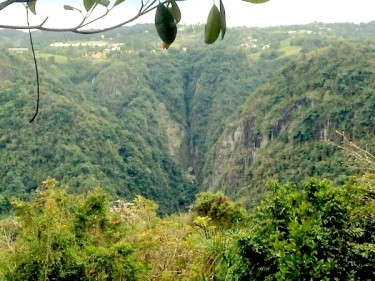 A view of the Canyon water fall renovated by "For Nature". 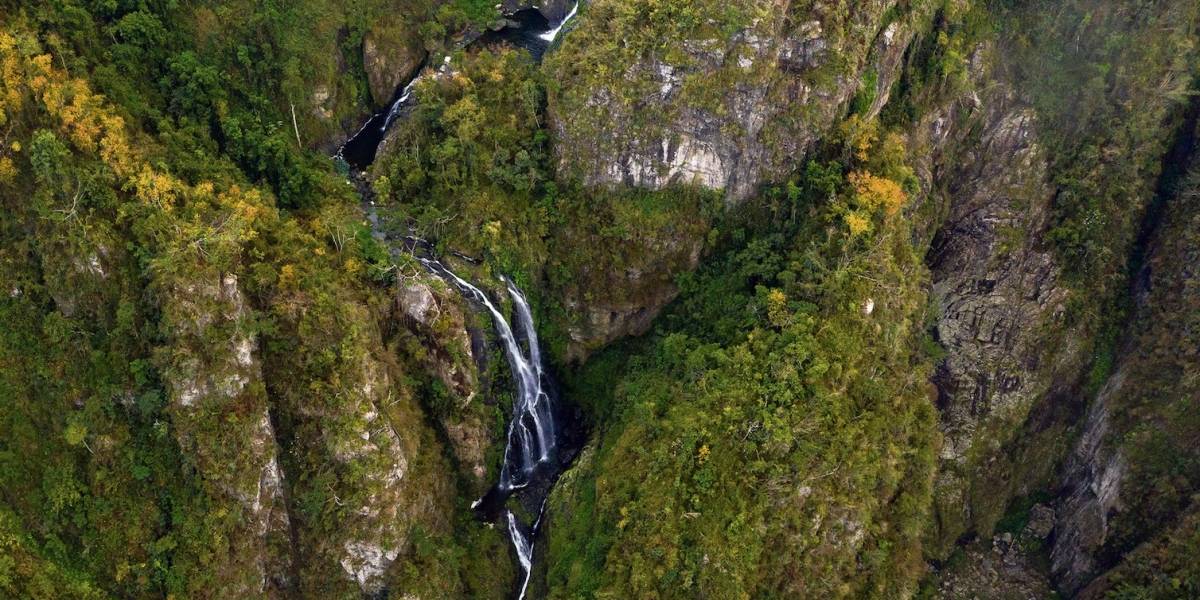 San Cristobal Canyon is the deepest Canyon in the Caribbean, for that reason, it has geographical importance. The formation of this Canyon was due to the natural water erosion from the river system, and its land is very rich in soil types that provide the necessary conditions for a diverse ecosystem that is home to an extensive amount of flora and fauna species. The water that flows through the canyon is used for the metropolitan industrial sector in San Juan, it also provides water and a recreational space for people in the surrounding areas. The Canyon is considered an area that needs to be protected and preserved because of its ecological value.

San Cristobal Canyon is considered a valuable ecological location because it connects adjacent rivers and becasue of its indigenous flora, fauna, and fertile soil. The Canyon is located nearby PR Road 725 between the towns of Aibonito and Barranquitas in a subtropical humid forest zone. It is around 9 km long and approximately 750 feet in depth. Between 2014 and 2016, the Planning Board of Puerto Rico divided the 6,881 acres of the San Cristobal Canyon (without the developed surrounding grounds) into 2,907 and 3,974 acres are property that became the respsibility of Barranquitas and Aibonito towns respectively. Of those 6,881 acres of land, 3,106 acres are natural reserve, and the Puerto Rico Conservation Trust manages more than two-thirds of that land (1,566 acres). The Canyon is known as one of Puerto Rico’s most impressive geological phenomena. It was initially formed as a result of the movement of tectonic plates and then shaped by the erosion caused by rivers. The Usabón River connects with the Plata River (the most extensive river in Puerto Rico) at this Canyon. The Canyon has around 695 and 144 species of flora and fauna respectively, some of which are endemic species to the island that are in danger of extinction. Legislation such as the U.S. Endangered Species Act protect these species and their natural habitat.

In the 19th century, the ecology of San Cristobal Canyon was affected by the altering soil conditions caused by agricultural activities. In the mid 20th century, sadly, the Canyon had been used as a landfill for more than 20 years despite its role in Puerto Rico's natural ecosystem. Fortunately, these actions have decreased over time allowing flora, fauna, and soil in the Canyon to return and renovate. However, in reponse to previous damage caused to the Canyon, in 1978, Puerto Rico’s Natural Resources Department (known as DRN for its Spanish acronym) identified it as one of twenty-eight areas that needed to be protected conforming the Law 150 Section 5. This law ensures the protection of areas having a significant value of flora, fauna, and soil. Puerto Rico’s Planning Board, in 1980, also made important restrictions that permitted only low-density housing developments in the region. The Puerto Rico Conservation Trust, which manage more than two-thirds of the parts of the San Cristobal natural reserve area, established an organization called “Para La Naturaleza” in 2013 which translates to “For Nature”. “Para La Naturaleza” is a non-governmental organization established for managing protected areas. This organization plans and promotes activities such as a bird counts and trash collection. It also organizes tours and provides educational services. Their efforts, in addition to the errorts of various governmental organizations, help preserve the Canyon, use its resources responsibly, and educate people about its importance.

San Cristobal Canyon has a historical house, known as the Laboy House which is a focal point for investigations on the Canyon and recreational and academic activities. Administraors at Laboy House promote environmental education about the Canyon and help develop ecological awareness corresponding to laws numbered 254 and 340 established in Puerto Rico in 2006 and 1998, respectively. The San Cristobal Canyon is also a local resource for students at the nearby Interamerican University of Barranquitas and the Bonifacio Sanchez High School in Aibonito. Some of the subjects students can study at Laboy House are in the areas of earth science, geology, geomorphology, hydrology, geography, as well as natural history, ecology, processes of the succession of vegetation and analysis of forest recovery. Students of Barranquitas Interamerican University frequently make water quality control tests at the Canyon in collaboration with nearby schools. A local environmental activist recognizes that “the study of the Canyon is an ideal setting for the students to construct knowledge about the local and global issues because of the parallels that it has with what is happening in the rest of the world” (Laborde,1996, p.21). For investigations of the Canyon and educational activities, a visit to Laboy House can inform and help generate local initiatives that promote the protection of the Canyon.

Many consider San Cristobal Canyon a magnificent place with extensive natural landscapes, diverse plants, and a diversity of indigenous animals. After being used as a landfill for many years, the government of Puerto Rico and many local non-profit organizations have committed resources and energy to preserve and protect it, so that future generations may continue to benefit from the region's resources and natural beauty. The Canyon provides a protected habitat for a wide variety of flora and fauna in the area and incorporates unique natural areas that visitors can explore. Academic and recreational activities in the Canyon help people to raise awareness of the importance of protecting the region's natural resources.