Dating back to 1850, the John H. Stevens House is one of the oldest surviving structures in Minneapolis, and the first in the area to be built west of the Mississippi River. John Harrington Stevens, sometimes called the “Father of Minneapolis,” constructed the house north of its present location, near Hennepin Avenue Bridge. Stevens acquired the land from the U.S. War Department, in exchange for operating a ferry service across the Mississippi. The house was an early epicenter for Minneapolis politics, and was the site where Hennepin County was first organized. Thousands of schoolchildren helped move the structure south in 1896, and in 1982 it was brought to its present location in Minnehaha Park. The John H. Stevens House Museum opened its doors in 1985.

The John H. Stevens House at its current location in Minnehaha Park 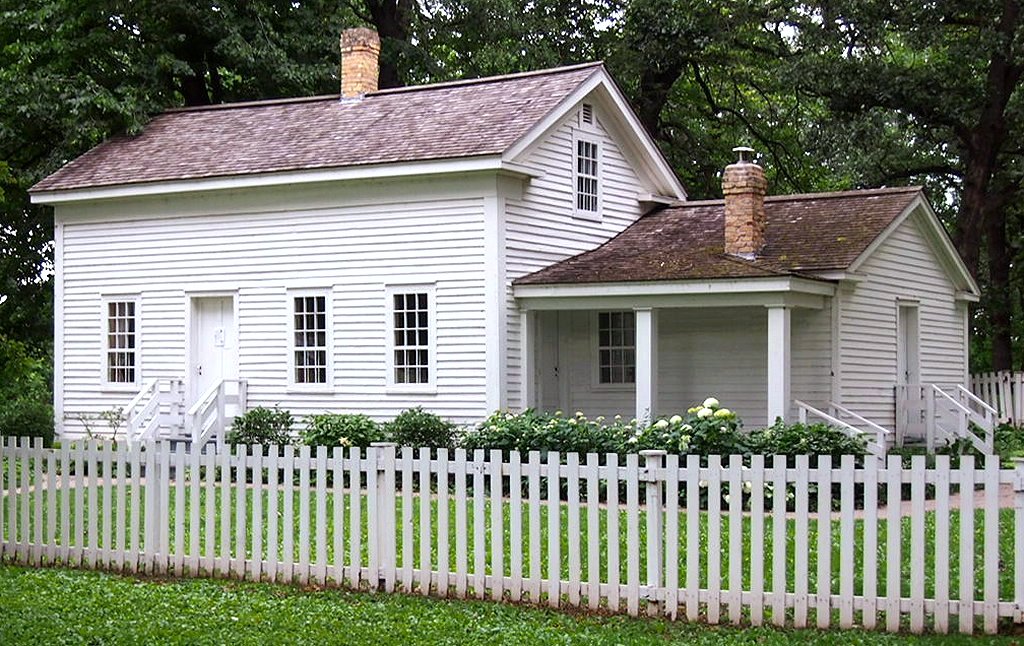 A statue of John H. Stevens in front of the house 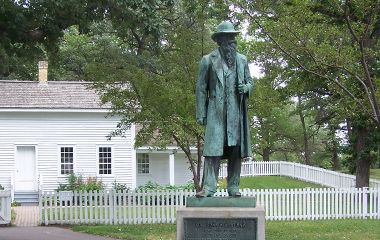 Native American tepees circa 1852, with the newly built Stevens house in the background 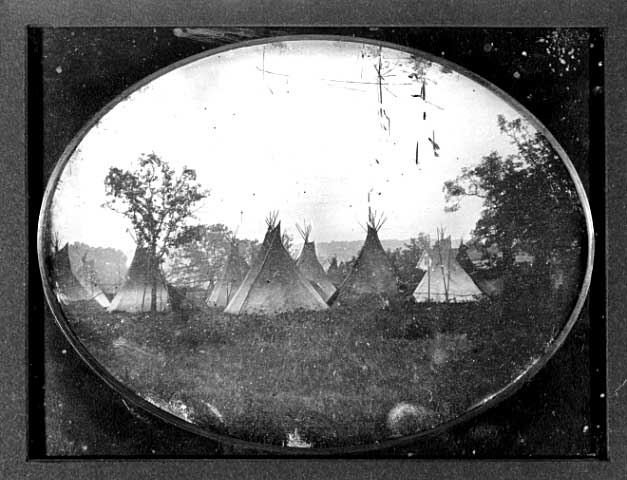 The house as it looked in 1855, five years after construction 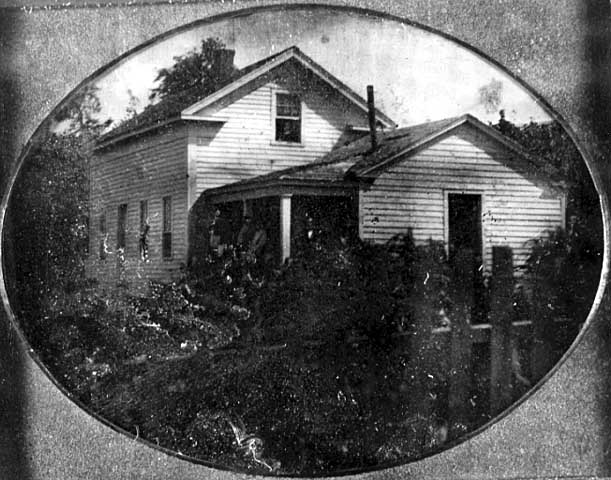 The house as it was being moved south in 1896 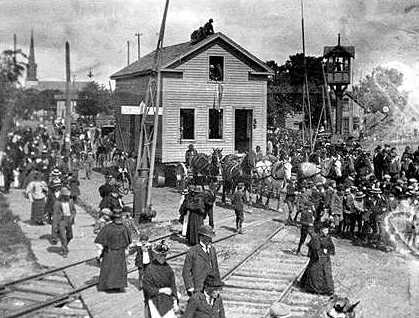 John Harrington Stevens, considered by many to be the "Father of Minneapolis" 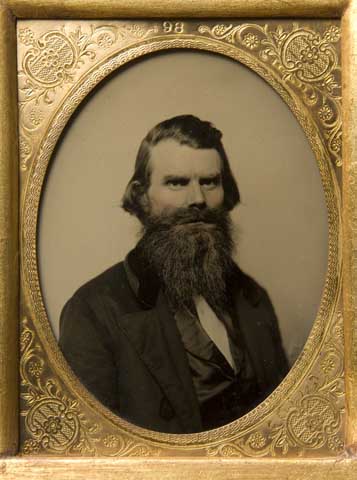 The sign outside the John H. Stevens House, "Birthplace of Minneapolis and Hennepin County" 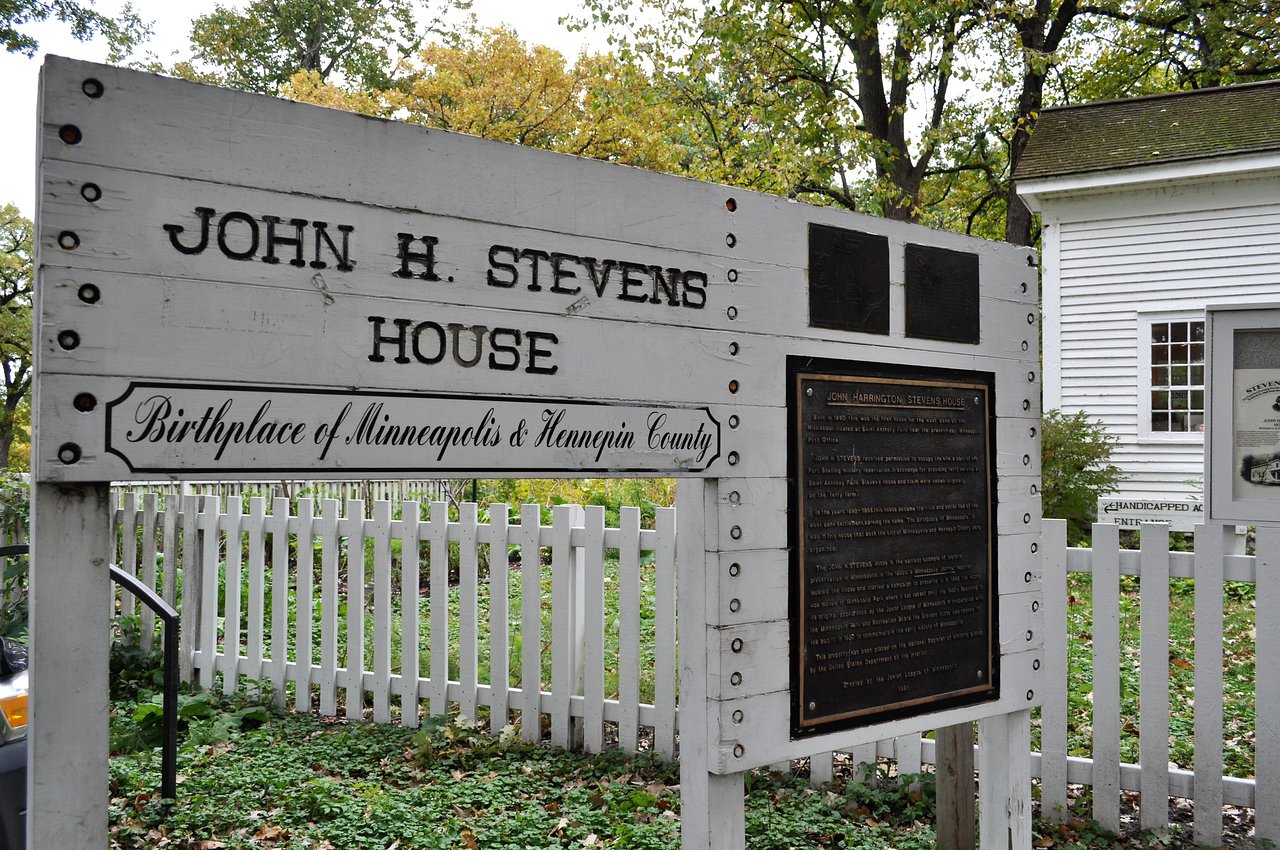 A plaque detailing the history of the house and its preservation 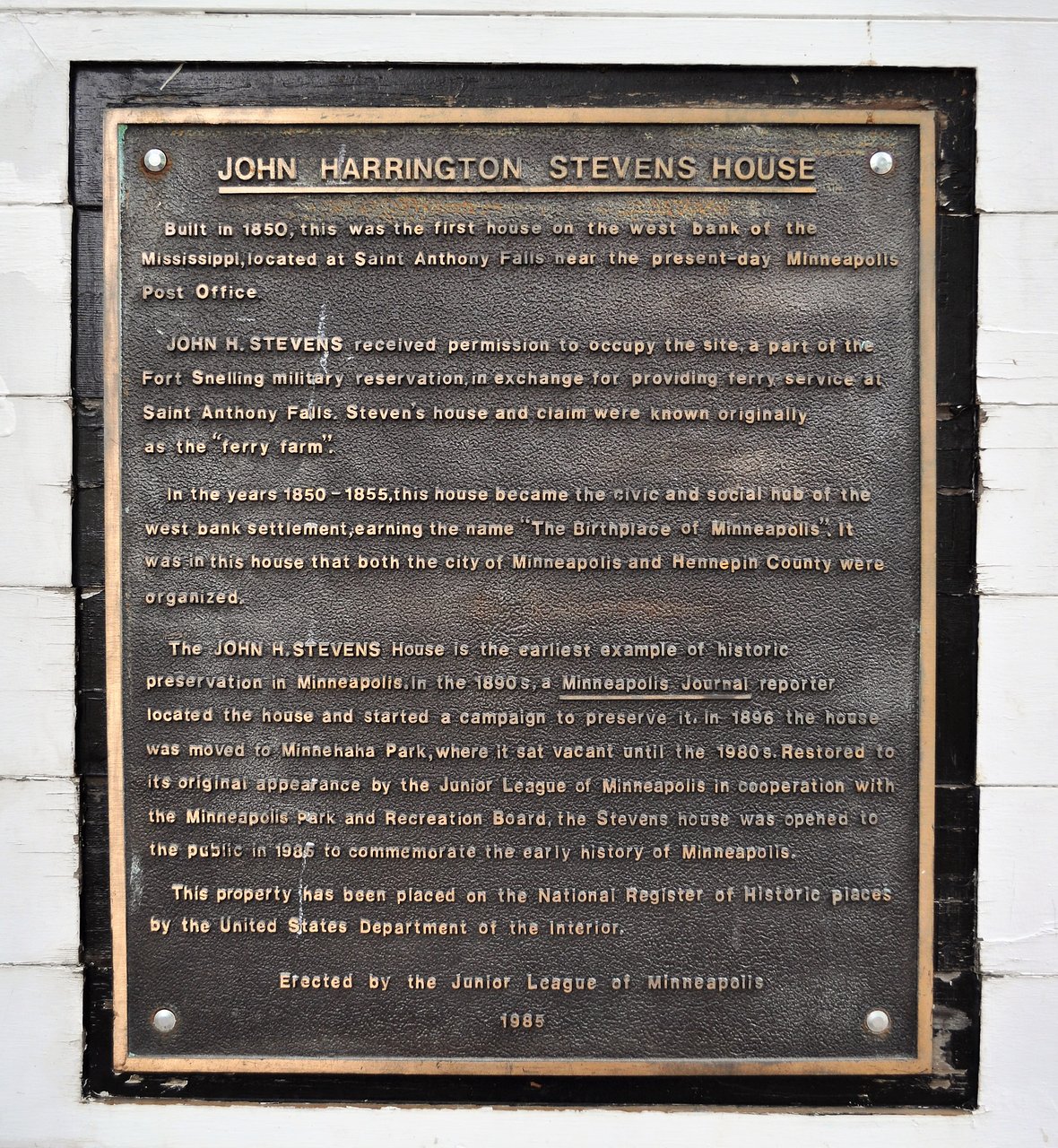 In 1819, the U.S. military established Fort Snelling along the Mississippi River near St. Anthony Falls. Settlement of the area was gradual throughout the ensuing decades, as the town of St. Anthony formed on the eastern side of the Mississippi, and the Fort Snelling Military Reservation occupied the western side. In 1849, John Harrington Stevens became the first white person to settle west of the Mississippi in this area. He struck a deal with the War Department, which gave him a portion of the Fort Snelling land in exchange for running a ferry service across the river. Stevens completed construction of his house in 1850.

The Stevens house was originally built in the heart of modern Minneapolis, near what is now the Hennepin Avenue Bridge. During the early 1850s, it was an integral headquarters for the area’s growing population. It was in this building that the foundations for Minneapolis were laid: the new town was planned and Hennepin County was organized within its walls; it housed both the first courtroom and the first schoolhouse in the town; and even the name "Minneapolis," a hybrid of the Dakota work for “water” and the Greek word for “city,” was suggested in the Stevens house.

Although Stevens was born in Canada, his work and dedication to his adopted home earned him the title the “Father of Minneapolis.” When Stevens officially claimed his property from the U.S. government in 1855, he sold and gave away much of the land to encourage settlement in the area. He founded and led Minnesota's first agricultural society, and worked to provide important services to the new towns that were springing up throughout the state. He served a number of terms in the Minnesota state legislature and state senate throughout the 1850s, 1860s, and 1870s, and was brigadier general of the militia during the Dakota War of 1862.

In 1896, due to the preservation efforts of a Minnesota Journal reporter, the Stevens house was moved south to the vicinity of Minnehaha Park, a feat that required the assistance of thousands of schoolchildren. Stevens died in 1900, and the house was unoccupied for many decades. However, in 1982 it was moved to its present location inside Minnehaha Park, and three years later the John H. Stevens House Museum was opened. It is considered one of the oldest buildings in the area, and a prime example of the Greek Revival architectural style that was prominent in early Minneapolis.