The Bell Rooms is a two-story brick structure that was built in 1908. Its name derived from its proximity to the signaling bell for the train tracks that were adjacent to the building at the time. It later became part of the infamous "Red Light" district in Redding during the 1940s. After the Bell Rooms building was saved from the wrecking ball by local preservationists in 2016, it was purchased by the McConnell Foundation, which plans to convert the property into a bike rental shop and cafe. The Bell Rooms building is one of the few remaining examples of brick architecture in downtown Redding from the turn of the twentieth century.

The Bell Rooms building, c. 2016 (top) and an architectural rendering of a new plan to preserve the property (bottom) 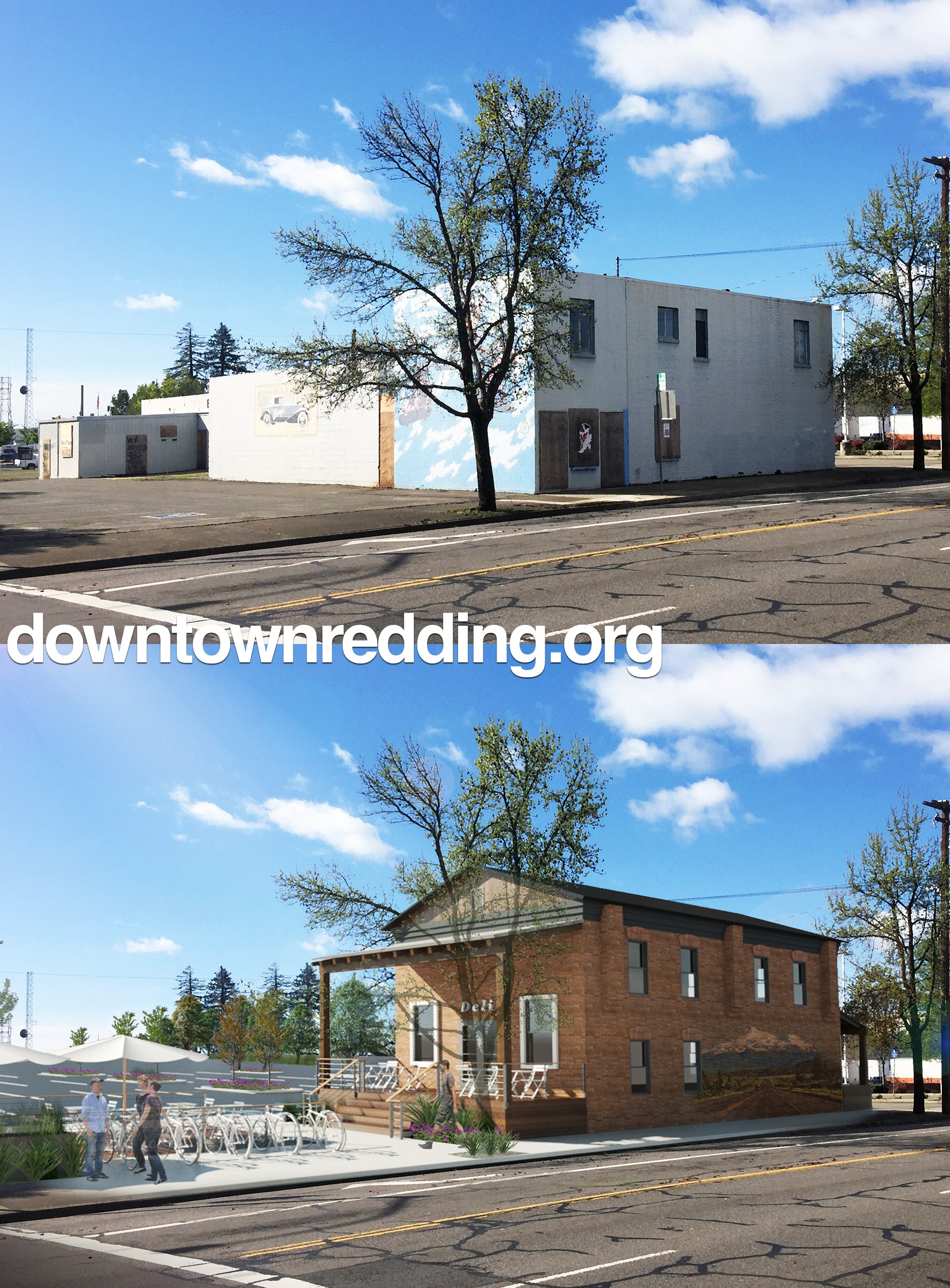 Conceptual rendering of the Bell Rooms Building as a new bike shop and cafe, with outdoor patio, and with adjacent buildings also preserved 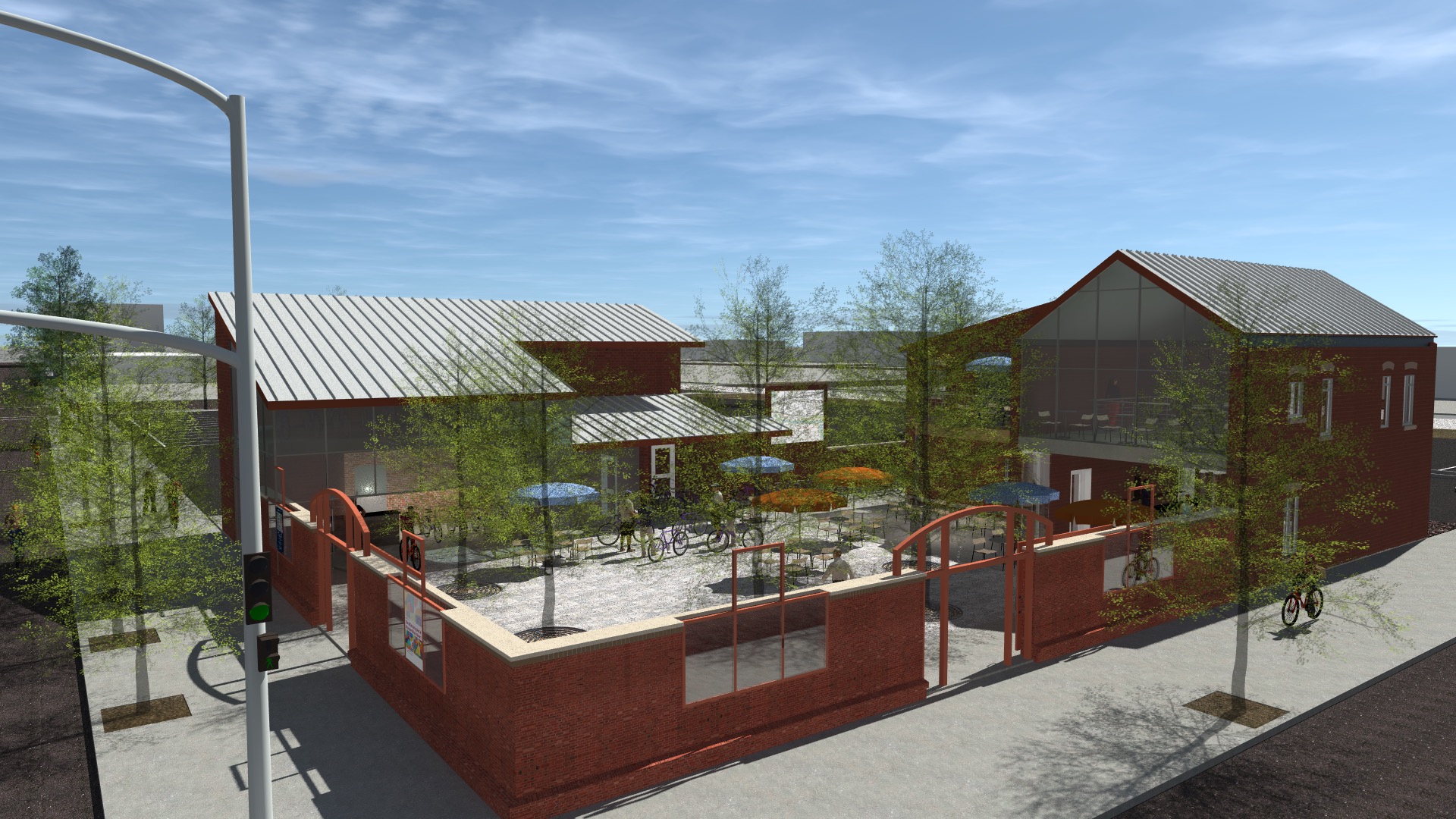 Broad plans for the future urban revitalization of downtown Redding 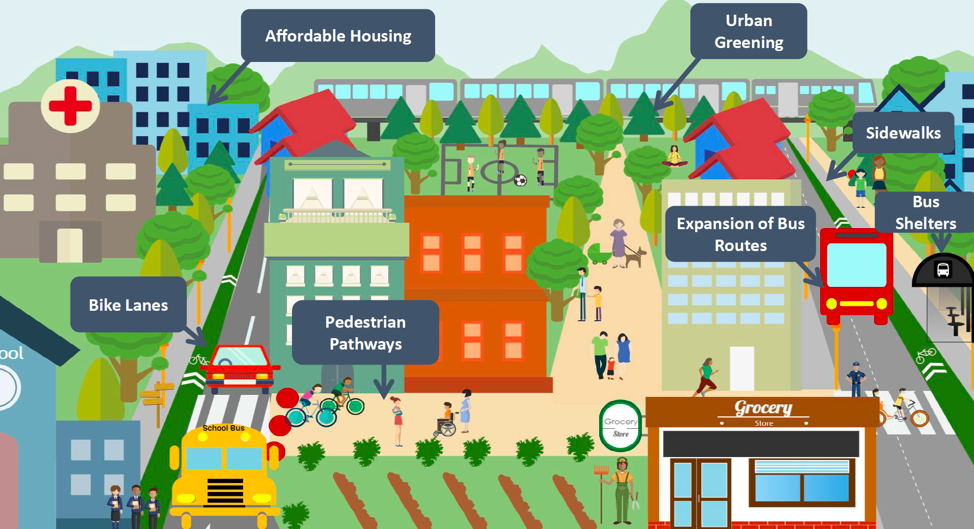 Bell Rooms Building (on left) c. 2016, as it stood awaiting demolition before it was purchased by the McConnell Foundation for preservation and restoration as a bike shop and cafe 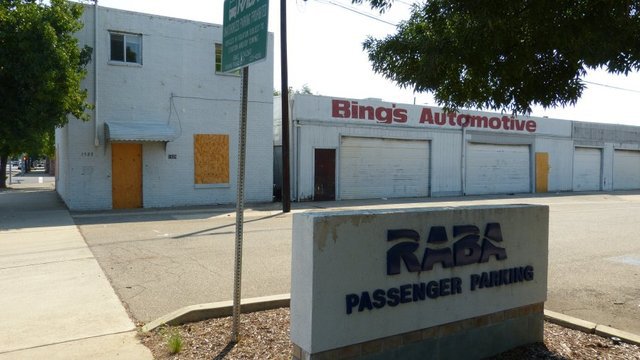 Conceptual rendering of the Bell Rooms Building as a new bike shop and cafe with outdoor patio, and with adjacent buildings also preserved 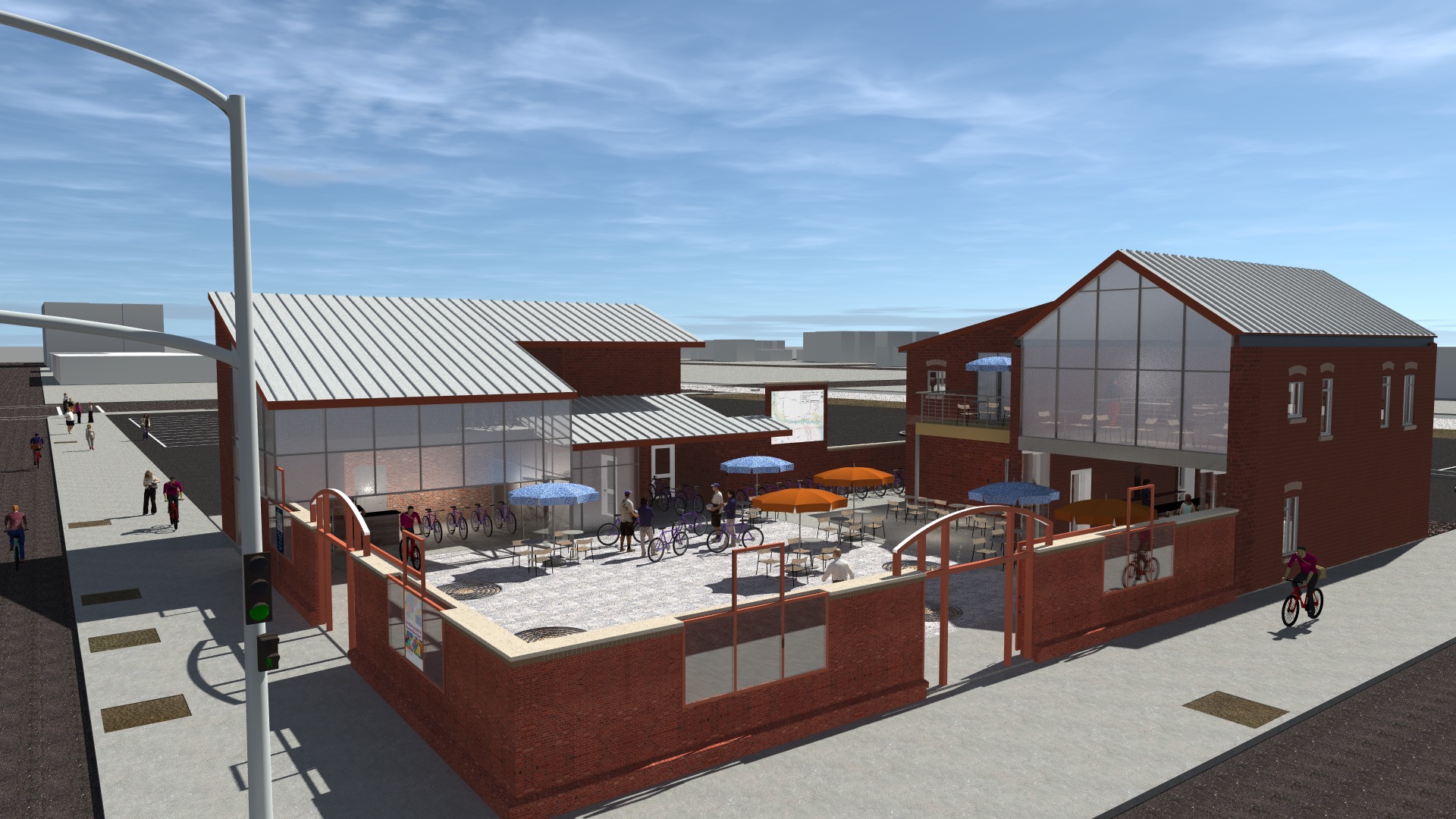 Latest conceptual rendering of the Bell Rooms Building as a new bike shop and cafe with outdoor patio, and with adjacent buildings also preserved 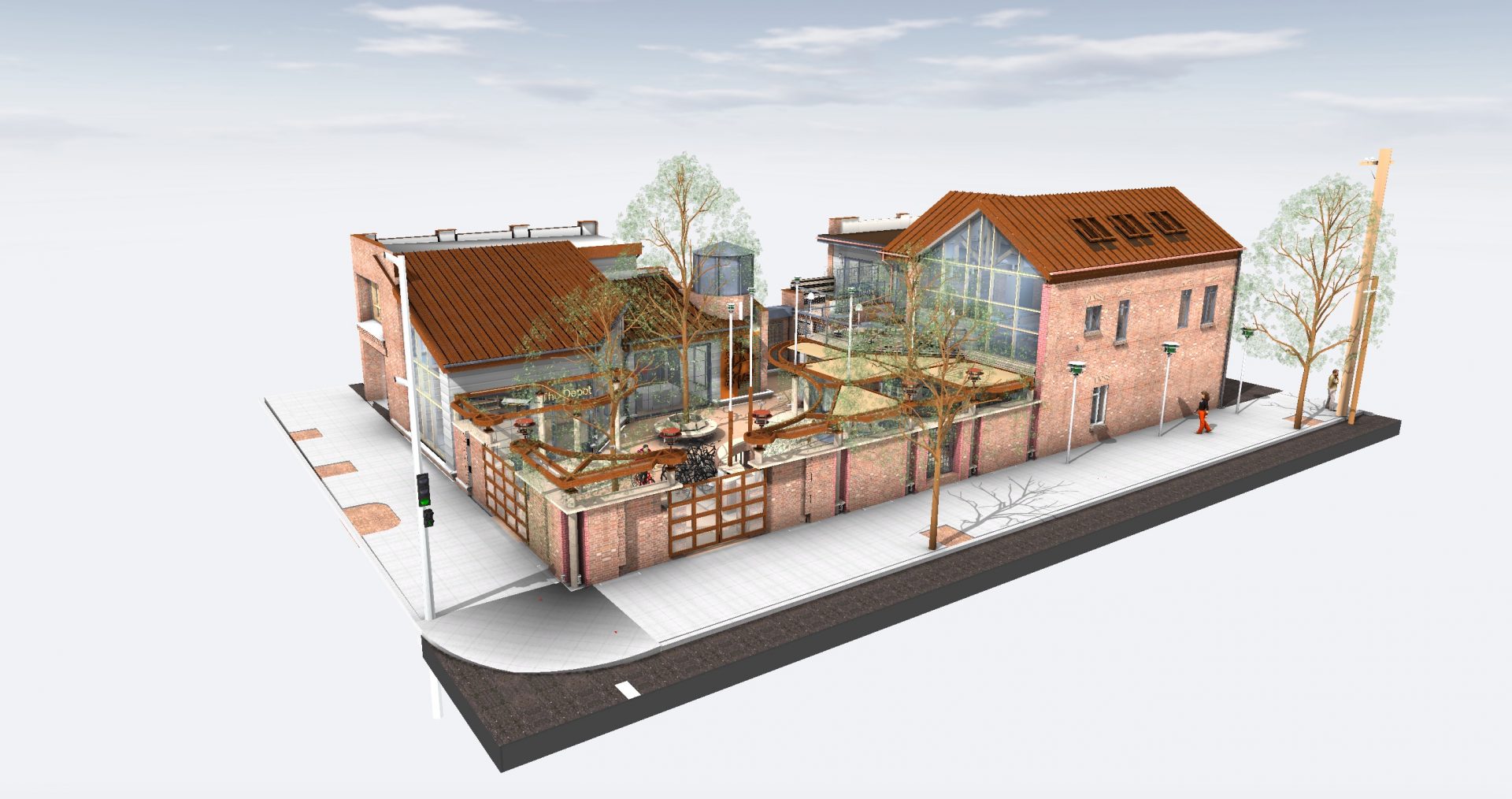 The Bell Rooms building is located in Redding's former "Red Light" District, which saw its heyday in the 1940s, particularly due to the influx of workers during the construction of the Shasta Dam project. However, the brick buildings in this neighborhood, which was known as "The Alley" and was listed as "Block 13" on early maps of the city, date back to as early as 1900.

At the turn of the twentieth century, warehouses, breweries, saloons, and hotels cropped up near the railroad tracks along Shasta Street as Redding became an industrial hub in Northern California. In an effort to re-zone the area, the city attempted to remove this neighborhood from coverage by the Redding Fire Department. It subsequently asked all residents to relocate into tenements erected by the city on Center Street. Three weeks later, a fire swept through the Block 13 neighborhood, leveling several blocks entirely, and anyone who remained was forced to relocate or rebuild.

After another fire swept through this neighborhood in September 1908, the city required people to rebuild in brick, instead of wood. The local brick manufacturing plant, Holt & Gregg, provided many of the bricks during this period of reconstruction. This included a property that was built in 1908 on the corner of Shasta and California Streets, which later became known as the Bell Rooms building due to its proximity to the railroad tracks and the track signaling bell. During the 1940s, the Bell Rooms building became part of the now infamous "Red Light" district that emerged in this neighborhood, particularly with the influx of workers to the area during the construction of the Shasta Dam.

By the twenty-first century, the building sat vacant and boarded up, with the property then owned by the Redding Area Bus Authority (RABA). In 2016, the city began planning to demolish the building. Two separate historical consulting firms had evaluated the building's historical value, and each had decided that the property would not be eligible for nomination to the National Register of Historic Places because the historical integrity of the building had not been sufficiently preserved. This was partly due to the addition of a cinder block wing on one side, and other modifications that had been made over the years.

Members of Redding community were deeply divided on the issue of whether the property should be demolished or saved. Some did not see the value in saving a derelict brick building and former 1940s brothel. Others felt that the Bell Rooms reflected Redding's early industrial past, as the building was built in 1908 when the city was emerging as an important industrial crossroads in the region and the property retained its original brick exterior and windows. Ultimately, local preservationists came together, led by the Shasta Historical Society, Viva Downtown, and the Shasta County Arts Council. They fought hard to save the Bell Rooms building from the wrecking ball. In response to this public outcry, the Redding Area Bus Authority requested proposals from anyone who wanted to purchase the building.

In 2017, the McConnell Foundation came forward with a plan for an adaptive reuse project to preserve and restore the Bell Rooms building. The plan included converting the property into a bike rental shop and cafe as part of a broader effort to revitalize the neighborhood and the city of Redding through sustainable transportation and outdoor community spaces. Within this plan, the Bell Rooms building was considered well-situated near the new Distelhorst-to-Downtown bicycle path, which had recently been funded by the city to connect Redding's bike trails on the Sacramento River with the city's downtown economic center.

This proposal for the Bell Rooms building includes a bike sharing program that would facilitate access between downtown Redding and the bike trails, while promoting sustainable tourism and bicycle tours. It also involves the restoration of the properties immediately adjacent to the Bell Rooms building. The overall plan entails the creation of a historic building complex grouped around an outdoor patio, with a place for cyclists to store their bikes while grabbing something to eat from the cafe.

During the second half of the twentieth century, the Bell Rooms building was owned by Charles Bull who operated a taxi and rental car company, and an auto repair shop, from this location. Thus, the McConnell Foundation’s overall plan to adapt the restored property into a bike rental shop is also in keeping with its previous transportation-related usage. After the proposal was approved by the city, the McConnell Foundation was able to purchase the building in 2019, with the adaptive reuse project underway at this location during 2020.