The Casiville Bullard House was built by an African American stonemason and bricklayer, Casiville Bullard, for himself in 1910. The Four Square home is listed on The National Register of Historic Places. Bullard was the son of Tennessee slaves who were cotton pickers and had migrated to the area in the late 1800s. The Casiville Bullard House is a very rare example of a home built by an African American slave laborer in Minnesota in the early twentieth century. Bullard had only received a third-grade education because he was forced to work to support his family at a young age, but he learned stonemasonry and bricklaying from his brother in law. Soon after Bullard purchased the land, he and his family lived in a tent during the construction of the house. After he completed his long work day, he would work on the house at night often under the light from a lantern held by his wife. The house still stands as a tribute to Bullard and his family and is a piece of African American history in the area.

This home was built in 1909 by Casiville Bullard, the son of former slaves. 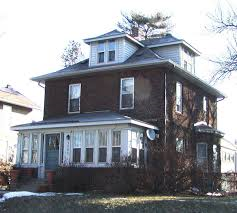 The Casiville Bullard House, born by Casiville Bullard himself, is listed on The National Register of Historic Places.  Bullard was a trained professional bricklayer and stonemason and built the house for himself in 1910.  Slave labor was a major part of America's beginnings and the first African Americans to inhabit the Minnesota area were slaves of some of the southern explorers who had come to the area in search of natural resources.  Casiville, Bullard was the son of a southern slave who had migrated to the area.

Bullard, having not received an education past the third grade, knew he had to acquire some type of skill to have a decent life.  His brother in law taught him the trade and skill of stonemasonry and bricklaying, so he moved to the state of Minnesota to work for the third State Capitol that was designed by Cass Gilbert.  Bullard was a card-carrying member of the Bricklayers Local #1 branch.  This meant he was afforded the rights that the unionized workers received, which was rare for this day and time.  Unionized work also made up the majority of the construction work in the St. Paul area during this time which afforded the unionized workers much of the work during this period.  Bullard was also very sought after for his skills as it was very rare during these times to find a skilled laborer that was proficient in both stonemasonry and bricklaying.  Bullard helped build the Federal Courts Building, The St. Paul Cathedral, The Governor's Residence, the Union Depot as well as the Highland Park Water Tower.

Casiville Bullard was a pillar of the community and was a beacon of pride for the African Americans in the area.  He had a reputation as an expert in his field of stonemasonry and bricklaying.  He used all of these skills he had acquired over the years to build this beautiful home for his family which still stands today.  Its listed on the National Register of Historic Places.  It is a must stop and see for anyone who appreciates good African American history.