This museum honors the legacy of the Fayetteville Independent Light Infantry (F.I.L.I), which was formed in 1793 in the wake of the French Revolution (there was a possibility that the United States would get involved in the wars between England and France and other European countries). The museum features numerous artifacts and items related to the F.I.L.I, which was an active military unit through World War I.

Many historic artifacts are on display in the museum. 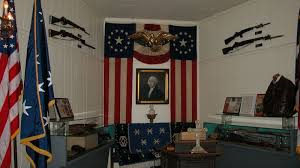 The F.I.L.I. participated in the Civil War as a part of the 1st North Carolina Volunteers, fighting in the Battle of Bethel, one of the first battles of the war. Some of its troops were among the Confederate troops that surrendered at Appomattox. During the Spanish-American War (1898), F.I.L.I. trained on Tybee Island, Georgia, but did not go to Cuba. In 1917, it was transferred to Camp Stewart in El Paso, Texas to help protect the border from Mexican raids led by Francisco "Pancho" Villa, one of the major figures of the Mexican Revolution (1910-1920) who led at least one confirmed raid into the United States. During World War I, F.I.L.I. was part of the 119th Infantry Regiment and fought in the Flanders, which is the northern portion of modern-day Belgium. After World War I, the F.I.L.I. continued as a social and fraternal organization.

The museum was formed after World War I in order to protect the contents of its armory (built in 1823) as well as documents and artifacts. During the 2000s, the F.I.L.I. organization functioned as a ceremonial unit. Today, the museum and armory tours are held on a "by appointment only" status but will be sure to give you and your family a taste of the history behind the organization.