As the second World War began to have significant economic impacts, rationing of commodities such as fuel, rubber, metal, and certain foods became commonplace. Baseball, having not yet lost the majority of their players to the military, did their part by limiting the distance traveled for spring training in 1943. The Cincinnati Reds (MLB) and Indianapolis Indians (MiLB) came to Indiana University’s campus in Bloomington in mid-March through April to train, practice, host exhibition games, and begin their 1943 seasons. Many teams throughout the state and of the surrounding states traveled to smaller college towns in Indiana instead of their usual training camps in Florida and Arizona. Both teams were coming off seemingly mediocre seasons. In 1943, the Cincinnati Reds, led by manager Bill McKechnie, came to Bloomington with high expectations following a mundane 1942 season. McKechnie was a long-time baseball man, playing from 1907 until 1920, when he made the transition to being a manager. It clicked for him very quickly, as he led the Pittsburgh Pirates 95-58 record and a World Series title in 1925. He transitioned to managing the St. Louis Cardinals in 1928, where he led them to the 1930 World Series, losing to the New York Yankees in four games. He jumped around the league some more before landing with the Reds, where in 1940 he won the club its first World Series since the 1919 scandal-ridden World Series. After a few off years, especially in 1942 where the Reds went 76-76, the hope was to return back to the World Series as the team rolled into Bloomington for Spring Training, especially with the return of All-Star Frank McCormick, who was the 1940 National League MVP. McCormick, unlike the rest of the Reds squad who struggled to a combined batting average of .222, remained consistent as ever with a .277 batting average. With an All-Star in McCormick and a seasoned manager in McKechnie, the pieces seemed in place for another run that the Reds experienced only a few years earlier. Meanwhile, the long-time MiLB squad, the Indianapolis Indians, followed the Reds into the home of the Indiana Hoosiers. The Indians were a historical minor-league team, even by the standards of 1943. Coming into the season, the team had won four league and division titles, although with the last ones coming in 1928. It had been a struggle ever since then, as the Indians were a combined 1065-1112, with mediocrity plaguing the team. It didn't change heading into 1943, the Indians were coming off a 76-78 season in 1942 led by Gabby Hartnett, a former Cubs player who had Major League experience when managing the Cubs. Harnett’s lack of success in his first season was noticed by ownership, and he was replaced by Donnie Bush, the team's president and co-owner who had stints managing in the Major Leagues during the 1920’s and 1930’s. Bush, coincidentally, spent two seasons managing the Indians between Major League stints in 1924 and 1925, with both seasons ending wildly successful. With Bush at the helm, expectations for the American-Associate (AA) team were similar to the Reds, with hopes of a rise from mediocrity as Spring Training came around. 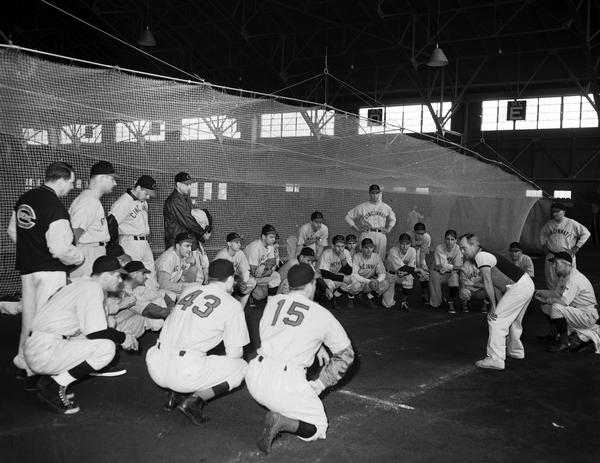 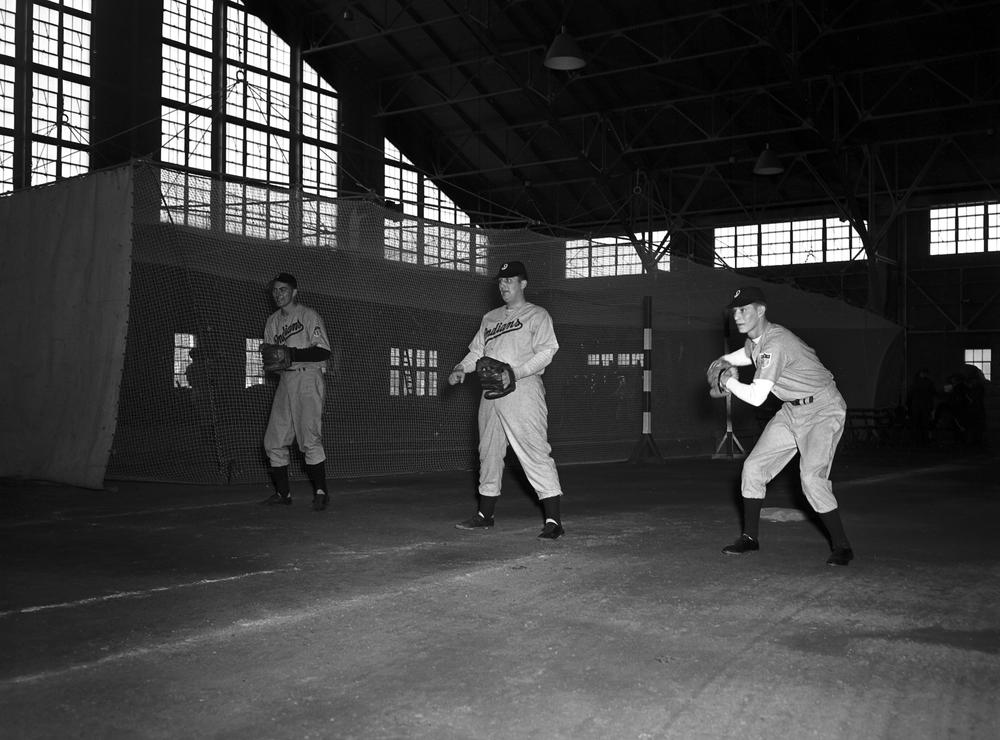 The Indianapolis Indians first began arriving on the 31st of March in 1943, just four days after the Cincinnati Reds. Both teams started off with only batteries present, pitchers and catchers. The exception being Freddie Vaughn of the Indianapolis Indians who arrived with the batteries to help manage the players’ accommodations. Vaughn would also leave after just four weeks but it is unclear why. Both teams performed daily workouts which included running around the Indiana University campus in Bloomington once a day in the early morning. Early on, the batteries of both teams had intrasquad games, meaning they played against their own team members, to begin the training and to simulate a game environment without having to spend money on travel. Those representatives of the Indians were Trainer Jim Pierce, Freddie Vaughn (second baseman), Al Bronkhurst, Glen Fletcher, Johnny Hutchings, Chief Hogsett, Bob Logan, Earl Reid, Walter Tauscher. The catchers were Stewart Hofferth and Norm Schlueter. Later on infielders Mickey Haslin and  Eric McNair would join Vaughn at Spring Training. Outfielders Gil English, Wayne Blackburn, Joe Moore and Willard Pike would be the last to arrive on April 1st .

The Cincinnati Reds’ Johnny Vander Meer, Joe Aliperto, Mike McCormick, Red Kane, Hugh Poland, Johnny Moore and Bill Little all arrived on March 27th. They would move into suites at the Graham Hotel and be treated to a banquet hosted by the greek organizations on campus. The Indiana Daily Student would cover both teams’ time on campus but since the Reds arrived first and had major league status, they received more space dedicated to chronicling their training. After the exhibition game between the two teams on April 7th, the Reds left Bloomington to play around the state, eventually making their way back to Ohio. The Indianapolis Indians stayed until mid-April and hosted additional exhibition games with the South Bend Cubs and Syracuse team in Bedford. The Indianapolis Indians played the Indiana University Varsity team on April 8th, the Cream and Crimson winning five to three after five complete innings. The game was called early because of inclimate cold weather and both teams retreated into the field house to warm up.

The following photos show both teams enjoying training in the field house, now called the Wildermuth Intramural Center just across seventh street from what was Jordan Field. When both teams returned for the 1944 season training, grounds crew from both stadiums actually constructed a field inside the field house structure, some of the painted lines can still be seen under the flooring of the main gym today. Batting cages were constructed with extra nets sewn from previously used club volleyball nets. The frequently changing weather caused many of the drills for both teams to be held inside the field house.