In September 1864, Uriah Alley of Cameron, West Virginia lied about his age and enlisted in the 6th West Virginia Infantry, a regiment to which is brother William belonged. In November, Uriah and William Alley were captured in a Confederate raid on New Creek, West Virginia. After several months imprisonment in Richmond, the Alley brothers were paroled. Uriah was mustered out of the army in June 1865 and returned to Cameron. In his old age became the last surviving Civil War veteran in West Virginia until his death in 1947 at age 99. In 2016, a wayside marker was erected to commemorate Uriah's place in West Virginia history. 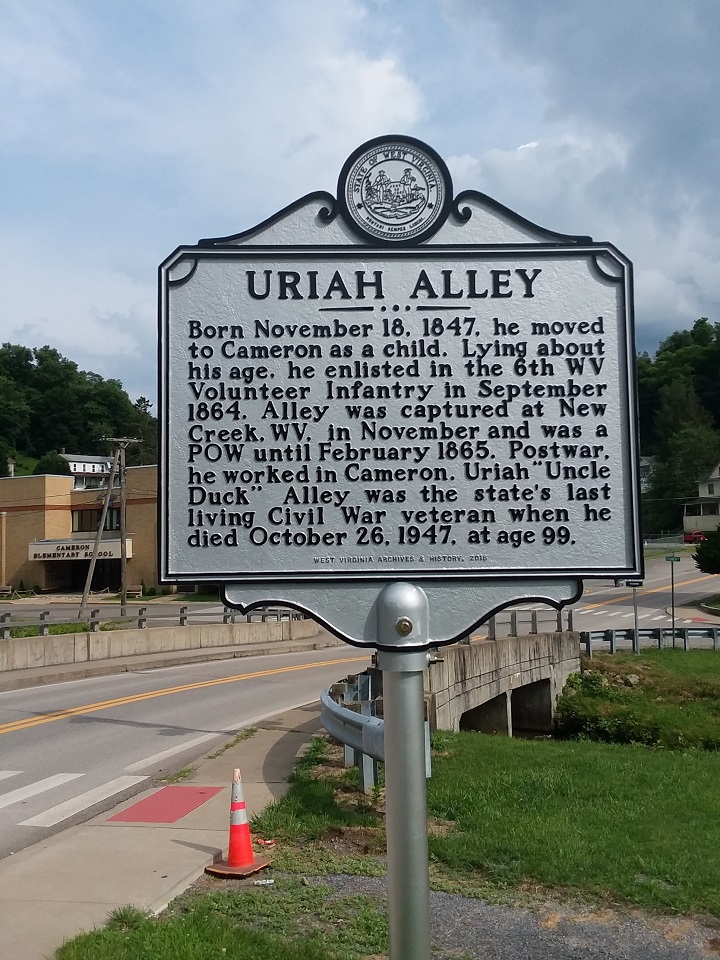 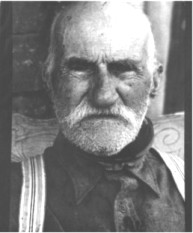 Camp of the 44th Pennsylvania Cavalry at New Creek, with Fort Fuller (Fort Kelley) on the hill in the background 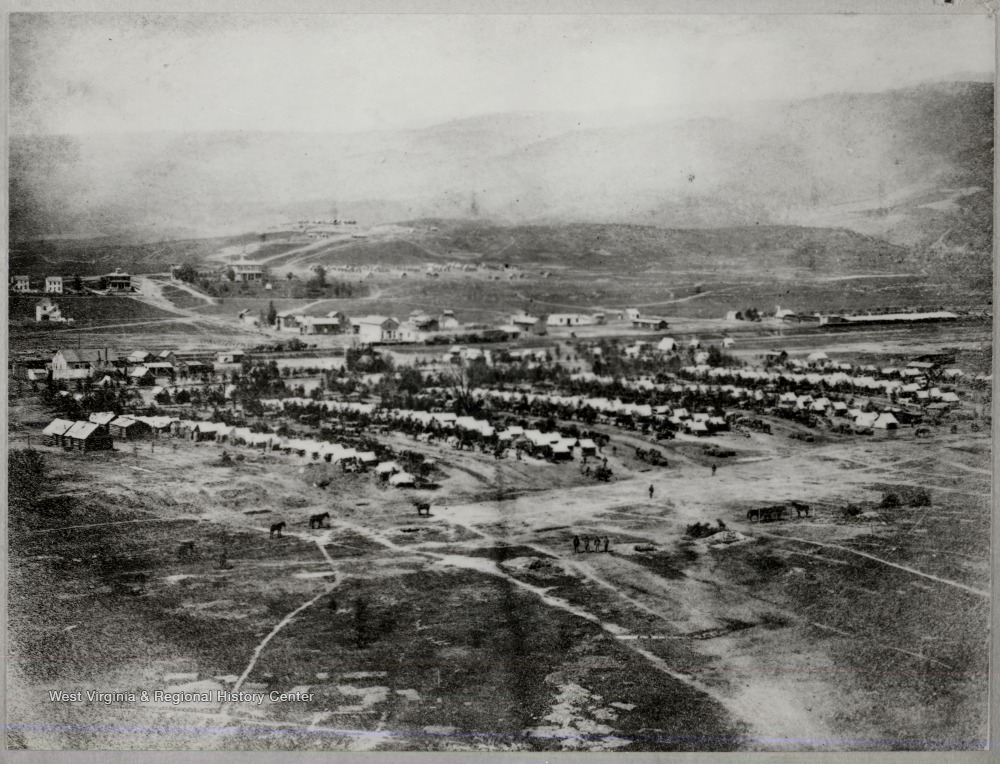 1864 Map of New Creek and vicinity 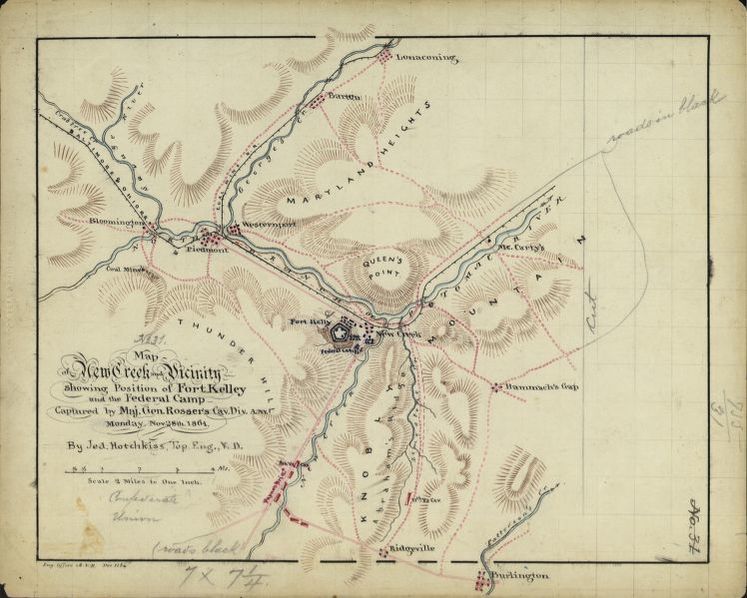 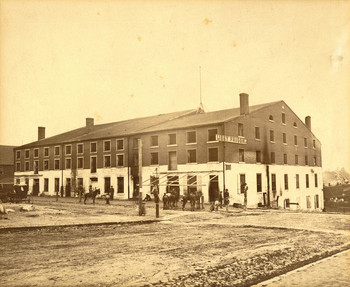 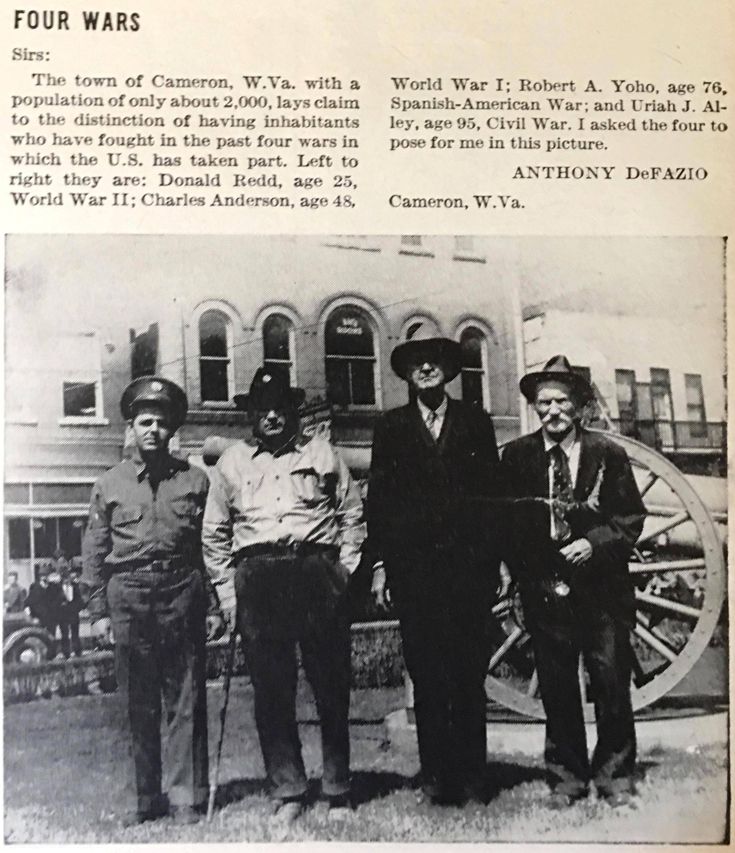 Born November 18, 1847, Uriah T. Alley lived in Cameron, Marshall County, Virginia as a child. On September 5, 1864, sixteen year old Alley lied about his age (claiming to be just over eighteen years old) and enlisted in Company L, 6th West Virginia Infantry. His brother, William L. Alley, had belonged to the 6th West Virginia since the start of the war. Uriah stood 5'7", with brown eyes, dark hair, and a light complexion. His enlistment ran for one year, and indicative of the United States' effort to entice recruits, he was granted a $100 bounty for enlisting.

Less than two months after enlisting, young Uriah found himself caught up in a "disastrous affair" at New Creek, WV. New Creek was a small village and Federal supply depot along the Baltimore & Ohio Railroad, a vital east-west supply line for United States forces. Due to its strategic value, Federal forces had constructed a large fortification, Fort Kelley (also known as Fort Fuller), to guard New Creek. Private Alley was stationed at New Creek as part of the post's garrison of 700 men.

New Creek proved an inviting target to Confederate raiders. On November 28, 1864, approximately two thousand Rebel troopers under Major General Thomas Rosser advanced on New Creek. The Federal garrison had been warned of possible attack, and extra pickets had been posted. Yet the Confederates fooled the enemy by wearing blue Union overcoats over their uniforms. Disguised as friendly Federal troopers, the Rebels managed to quickly capture the outlying picket posts, then overwhelmed the entire United States garrison in a matter of minutes. As the post's commander Colonel George R. Latham admitted, "The camp was completely surprised by the enemy and captured almost without resistance." Over 400 men were captured, including Uriah and William Alley. Although Uriah and his brother William managed to slip away from their captors during the night, they were recaptured the following morning.

Within two weeks of capture, Uriah and William found themselves imprisoned in Richmond's infamous Libby Prison, known for its overcrowded conditions. He endured captivity and illness for over two months until he and his brother were paroled on February 17. Although back in Federal service, Uriah suffered from pneumonia and debility for several months. He finally mustered out of the 6th West Virginia at Wheeling on June 10, 1865, ending a relatively brief and luckless military career.

After the war, Alley returned home to Marshall County, applying for a Civil War pension in 1870 and pursuing farming and his love of horses. As the 19th century rolled into the 20th, Uriah Alley (fondly known as "Uncle Duck") eventually grew to some prominence as the last remaining Civil War veteran in West Virginia, his story featuring in newspapers and Life magazine. In 1946, when his home burned in a fire, local citizens built him a new one. In 1947, at age 99, Uriah Alley passed away.

In 2019, as part of an effort to commemorate the Civil War and West Virginia sesquicentennial, a historic marker was placed in Cameron, WV acknowledging Alley's unique Civil War legacy.