Julia Augusta Robertson Pierpont (1828-1886) is credited by some as the founder of Decoration Day (now Memorial Day) in 1866. Other scholars date the tradition back even sooner. For example, David Blight discovered that 10,000 African Americans participated in a massive effort to rebury and honor Union soldiers who had died in a Confederate prisoner of war camp with a solemn parade on May 1, 1865. West Virginians joined this tradition through Pierpont's efforts on May 1866, when she cleaned the dilapidated graves of Union soldiers in Hollywood Cemetery in Richmond, Virginia, and decorated them with flowers. Pierpont may have been inspired by other efforts to commemorate the dead as the region and nation mourned the loss of over six hundred thousand men. While such commemoration was nearly ubiquitous in the year after the war, it may have been Pierpont's actions that inspired General John A. Logan, Commander-in-Chief of the Grand Army of the Republic (GAR), in May 1868, to declare May 30th to be Decoration Day. In 1882, the day of rememberance was renamed Memorial Day, and it became an official federal holiday in 1971 with the observance moved to the last Monday in May. Pierpont was also the wife of lawyer, businessman, and West Virginia founding father, Francis Harrison Pierpont (1814-1899). 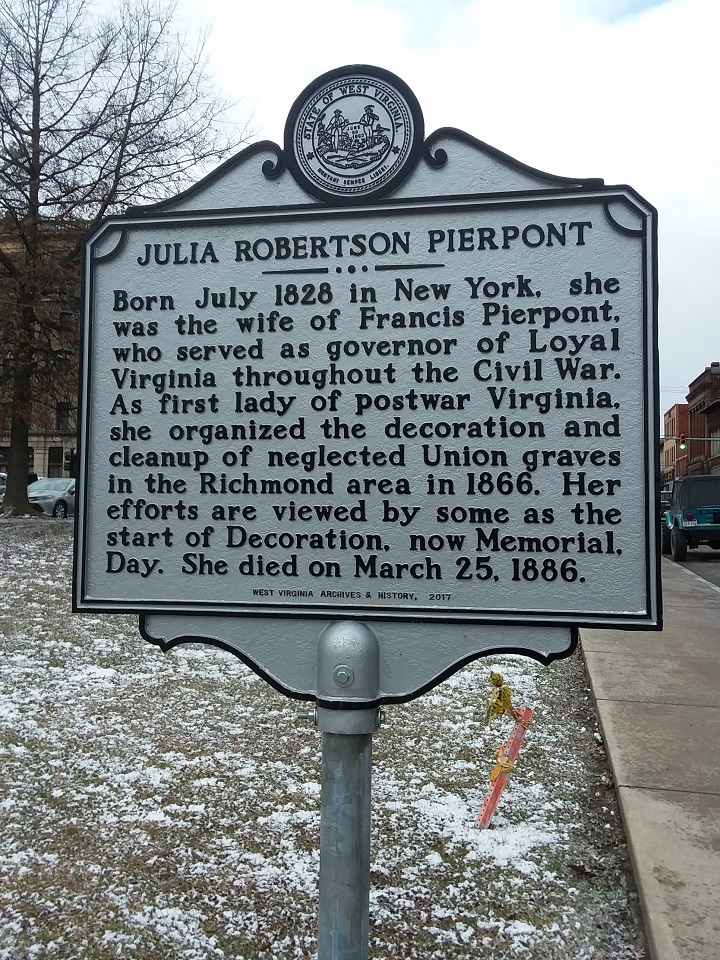 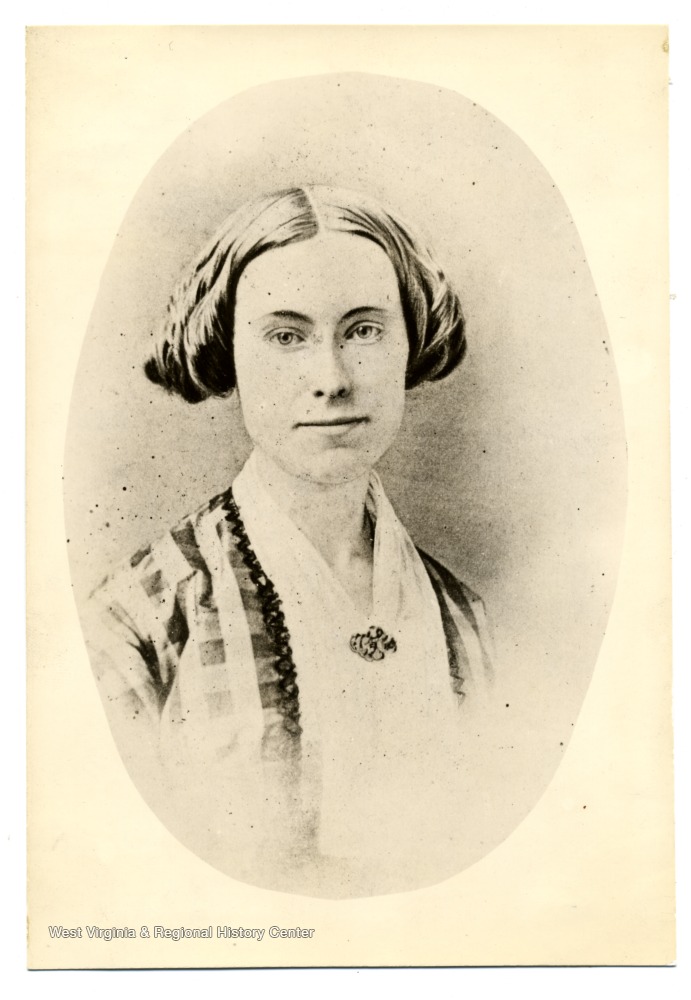 Julia Augusta Robertson Pierpont was born on July 26, 1828 in Dryden, New York, the daughter of a Presbyterian minister. Coming from a family of abolitionists and missionaries, she developed strong antislavery views and graduated from a female seminary in Washington, Pennsylvania in 1847. Sometime later, she made the acquaintance of Francis Harrison Pierpont (1814-1899). Born in Monongalia County, Virginia (now West Virginia), Pierpont spent his formative years in Middletown, Virginia (now Fairmont, West Virginia). He later read law and became a lawyer, representing the Baltimore and Ohio Railroad. In 1852, he founded a coal mining enterprise in Fairmont. On December 26, 1854, the couple wed.

Her husband’s penchant for politics would alter the trajectory of Julia’s life. Having campaigned enthusiastically for presidential candidates in the past, Francis Harrison Pierpont became involved in the presidential election of 1860, supporting the Constitutional Union Party. During the secession crisis, he delivered stirring antislavery, pro-Union speeches throughout northwestern Virginia. After Virginia seceded from the Union in April 1861, Pierpont and other representatives from pro-Union northwestern Virginia convened in Wheeling the following month. After he was selected to attend the Second Wheeling Convention in June, delegates at the meeting unanimously elected Pierpont governor of the Restored government of Virginia.

Julia followed her husband to Wheeling (the capital of the Restored government of Virginia) and then to Alexandria in 1863, when the government relocated there. During the Civil War, she dutifully served the Union cause, helping to manufacture and send flags and supplies to federal troops. After the conflict, Julia moved with her husband to Richmond, where he continued to serve as governor during the early years of Reconstruction. In May 1866, she cleaned the dilapidated graves of Union soldiers in the city's Hollywood Cemetery and decorated them with flowers. It is believed by some that her actions that day inspired General John A. Logan, Commander-in-Chief of the Grand Army of the Republic (GAR), in May 1868, to declare May 30th to be Decoration Day. In 1882, it was renamed Memorial Day, which became an official federal holiday in 1971 and observance was moved to the last Monday in May.

The onset of Radical Reconstruction precipitated the end of her husband’s tenure as governor in April 1868. Soon after, the couple returned to Fairmont. They remained there for the remainder of their lives. Julia Augusta Robertson Pierpont died on March 25, 1886. She is buried alongside her husband in Woodlawn Cemetery in Fairmont.

In 2017, as part of its Civil War sesquicentennial project, the West Virginia Highway Historical Marker Program of the West Virginia Archives and History installed a marker dedicated to Julia Augusta Robertson Pierpont. It stands along Adams Street in downtown Fairmont. Today, and for the past fifteen odd years, the city, Marion County, and the state of West Virginia celebrate Julia Pierpont Day on the Saturday before Memorial Day.