A native of Monongalia County, Virginia (now West Virginia) who later settled in Fairmont, Francis Harrison Pierpont (1814-1899) was a lawyer and industrialist before being elected governor of the Restored (or Reorganized) government of Virginia, the government of Virginia that remained loyal to the United States during the Civil War. Once his tenure as governor ended, Pierpont returned to Fairmont. In 1869, the people of Marion County elected him to the West Virginia state senate. The following year, he lost his bid for reelection and retired from politics. He died in Pittsburgh on March 24, 1899. He is buried in Woodlawn Cemetery in Fairmont. 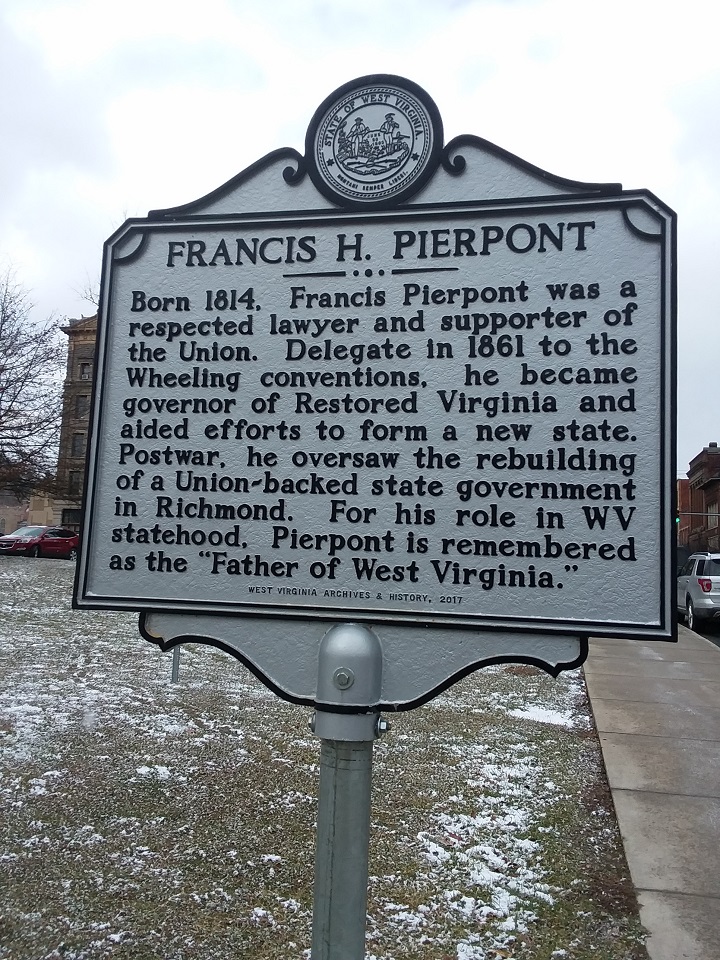 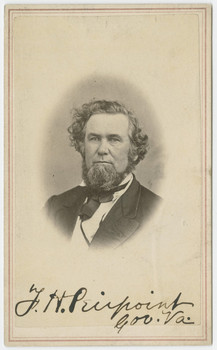 Francis Harrison Pierpont was born in Monongalia County, Virginia (now West Virginia) on January 25, 1814. His great-grandfather was Colonel Zackquill Morgan, the founder of Morgantown. Shortly after his birth, his family moved to what would become Marion County and then, a decade or so later, to the town of Middletown (now Fairmont). After receiving some formal education, Pierpont attended Allegheny College in Meadville, Pennsylvania in the late 1830s. After college, while working as a teacher in Harrison County, he read law and passed the bar in 1842. Pierpont then began practicing law in western Virginia. One of his early clients was the Baltimore & Ohio Railroad. In 1854, in partnership with James Otis Watson, he opened a coal mining enterprise, becoming one of the state’s earliest coal operators. Later that same year, he married Julia Augusta Robertson (1828-1886), a native of upstate New York and daughter of a Presbyterian minister.

Politics was always a part of Francis Harrison Pierpont. In fact, his father gave him the middle name of Harrison after William Henry Harrison, under whose command his father was serving at the time of his birth. Not surprisingly, Pierpont campaigned for Harrison in 1840. Two decades later, in 1860, he stumped for John Bell of the Constitutional Union Party. During the secession crisis, he delivered stirring antislavery, pro-Union speeches throughout northwestern Virginia. After Virginia seceded from the Union in April 1861, Pierpont and other representatives from pro-Union northwestern Virginia convened in Wheeling the following month. After he was selected to attend the Second Wheeling Convention in June, delegates at the meeting unanimously elected Pierpont governor of the Restored (or Reorganized) government of Virginia.

During the Civil War, from the capital of the Restored government of Virginia in Wheeling, Pierpont raised troops and funds for the federal war effort. In addition to his wartime duties as governor, Pierpont advocated for the creation of additional free schools in the state, encouraged the extension of rights to newly-freed individuals, and called for the abolition of slavery. In late 1863, he won reelection. That same year, West Virginia secured admission to the Union. Consequently, the Restored government of Virginia relocated to Alexandria. Once the war ended, it moved to Richmond. There, Pierpont continued to serve as governor during the trying early years of Reconstruction. The onset of Radical Reconstruction in 1867, however, precipitated the end of his tenure as governor. In April of the following year, Pierpont was removed from office.

Once his tenure as governor ended, Pierpont returned to Fairmont. In 1869, the people of Marion County elected him to the West Virginia state senate. The following year, he lost his bid for reelection and retired from politics. On March 24, 1899 he died in Pittsburgh. He was buried alongside his beloved wife (who died in 1886) in Woodlawn Cemetery in Fairmont.

In 2017, as part of its Civil War sesquicentennial project, the West Virginia Highway Historical Marker Program of the West Virginia Archives and History installed a marker dedicated to Francis H. Pierpont. It stands along Adams Street in downtown Fairmont.