On the night of December 19, 1861, a band of Moccasin Rangers led by Daniel Duskey raided the town of Ripley, Virginia (now West Virginia). After capturing the town without bloodshed, the pro-Confederate partisans plundered the jailhouse and post office, in addition to several stores and private residences. A few weeks later, federal troops captured Duskey and several of his “bushwhackers.” After being indicted, tried, and convicted of robbing the Ripley post office, Duskey spent time in federal prisons in Washington, D.C. and Albany, New York before receiving a pardon from President Lincoln in mid-1863 as part of a prisoner exchange. 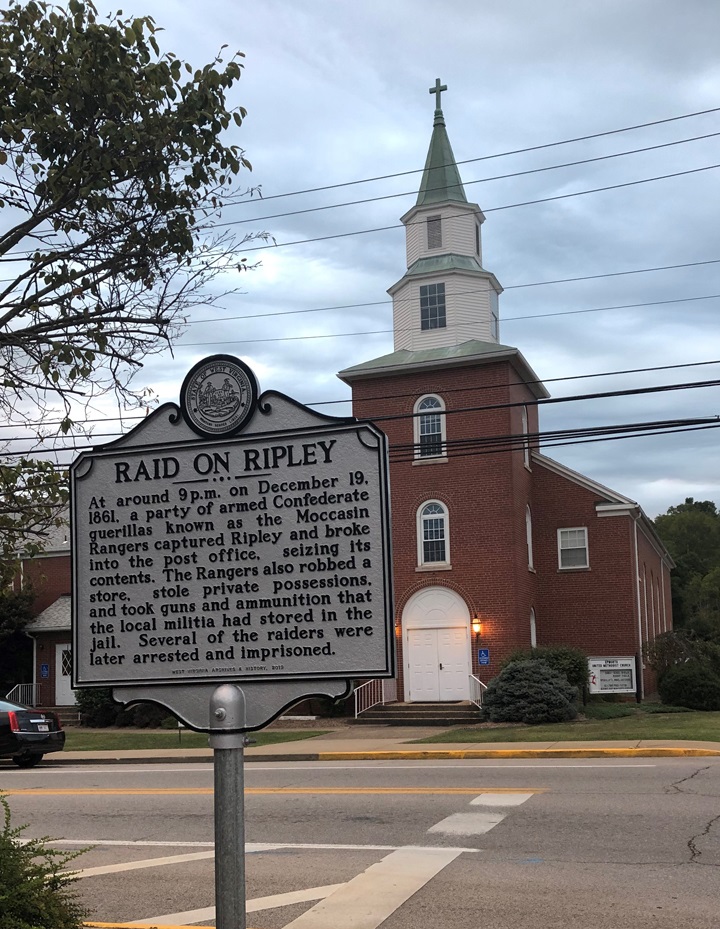 Following the federal offensive into western Virginia (now West Virginia) in mid-1861, Confederate sympathizers took up arms and formed numerous guerrilla units to slow the Union advance and intimidate unionist civilians. In response, pro-Union western Virginians formed their own guerrilla units to defend themselves and counter these pro-Confederate partisan groups. Referred to as “bushwhackers” by contemporaries and historians alike for the surprise hit-and-run tactics they employed, members of these partisan groups came from nearly all segments of society and were often bound by family and kinship ties. While technically aligned with one side or the other during the conflict, these units operated beyond the control of Union and Confederate military brass and therefore outside the traditional laws of warfare. Consequently, they often used the war as an opportunity to settle personal disputes, rather than advance the military goals of their respective sides.

One of the most infamous pro-Confederate guerrilla units in western Virginia during the Civil War was the Moccasin Rangers. Composed of men primarily from Calhoun County, the Moccasin Rangers operated along the Little Kanawha River, attacking rival pro-Union partisan groups and raiding unionist towns. Leaders of various bands of the group included Perry Conley, George Downs, Peter Saurburn, and Daniel Duskey, a former justice of the peace.

In 1861, Duskey and his band of Moccasin Rangers raided the town of Ripley, the seat of Jackson County. In early December, Dr. O.G. Chase opened a Union recruiting office in the town. Shortly thereafter, he ordered arms, ammunition, and other supplies and stored them in the county jail. On the afternoon of December 19, Chase and his recruits marched out of town, leaving it defenseless. That evening, Duskey and his men rode into Ripley, yelling and firing their weapons. They quickly captured the town without bloodshed. With the town secured, the Confederate partisans began to loot. They broke into the jail and helped themselves to the federal munitions. The rangers plundered several stores and private residences. They even stormed the post office and snatched anything of value. Once they and their horses were unable to carry any more, Duskey and his men quickly disappeared into the surrounding countryside.

For Duskey, the excitement over the successful raid on Ripley did not last long. A few weeks later, federal troops captured Duskey, along with several other Moccasin Rangers, and marched them to Wheeling. When the captured partisans arrived in Wheeling, federal authorities separated Duskey, his son George, and another man, Jacob Varner, from the rest of the group, since they were the only ones involved in the raid on Ripley. Most of the captured raiders were sent to Camp Chase in Ohio, while the other three remained in Wheeling. Since the Duskeys and Varner were guerrillas and therefore outside military law, federal authorities treated them as common criminals. Before he could be tried, George Duskey escaped from a hospital while being treated for a minor illness. About two weeks later, Daniel Duskey and Jacob Varner were tried, convicted, and sentenced to a few years in prison. The two were first sent to a penitentiary in Washington, D.C. and then later to a prison in Albany, New York. In mid-1863, as part of a prisoner exchange deal, Duskey and Varner received pardons from President Lincoln. Before he could be formally exchanged, Varner escaped federal custody. Duskey was later released at Fortress Monroe in Virginia.

In 2019, as part of its Civil War sesquicentennial project, the West Virginia Highway Historical Marker Program of the West Virginia Archives and History installed a marker commemorating the Moccasin Rangers' raid on Ripley. It stands at the intersection of North and Church Streets in front of the Ripley branch of the Jackson County Public Library in downtown Ripley.