Born in 1819, Daniel Frost edited the Virginia Chronicle newspaper in Jackson County prior the Civil War. Although the Frost family was divided in its sentiments, Daniel opposed secession and supported the Restored Government of Virginia. He served as Speaker of House of Delegates for the Restored state. In 1862, Frost accepted a commission as lieutenant colonel of the Eleventh West Virginia Infantry and rose to colonel in command of the regiment later in the year. In the fall of 1864, Frost and the Eleventh West Virginia fought in the Battle of Floyd's Mountain and the Battle of Cool Springs. At Cool Springs, Frost was mortally wounded repulsing a Confederate attack and died within a few hours. His death was mourned by many. In 2016, West Virginia erected a historical marker to commemorate Frost's contributions to the state's history. 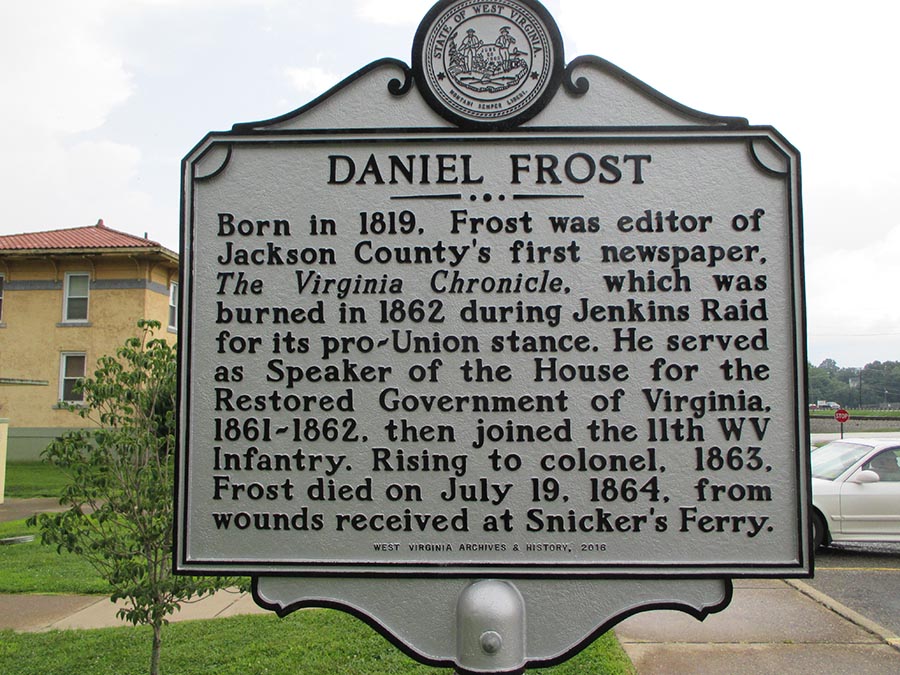 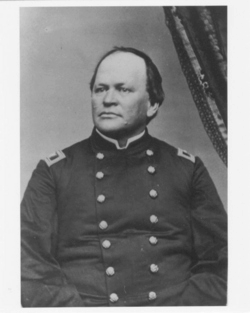 Born in 1819, Daniel was one of 10 children in the Frost family. The Frosts lived in Ravenswood, Jackson County, Virginia. In 1853, Daniel's brother William established the Virginia Chronicle, the first paper in Jackson County. In 1858, Daniel Frost purchased the paper from his brother and continued editing it until the outbreak of the Civil War.

Upon Virginia's secession, Frost stood firm with the United States as did many other western Virginians. Ending publication of the Chronicle, Frost served as a delegate to the Second Wheeling Convention in 1861, which sought to form a Restored Government of Virginia loyal to the United States. Frost became the Speaker of the House of Delegates for the Restored Government. He likewise supported the West Virginia statehood movement.

In 1862, Daniel Frost accepted a position as lieutenant colonel of the newly formed Eleventh West Virginia Infantry. Frost's brother-in-law John Rathbone was the regiment's colonel, but Col. Rathbone's capture (along with 200 men of the regiment) in the fall of 1862 led Daniel Frost to assume overall command of the Eleventh West Virginia. Daniel was only one of several Frost brothers to serve in the Civil War, and not all did so on the side of the Union. While Bushrod Taylor Frost also served in the Eleventh West Virginia, Griffin Frost and John Frost both served in Confederate regiments. (Griffin Frost was captured and imprisoned during the war, keeping a journal of his experiences which was eventually published.)

After a relatively quiet year of administrative affairs, in 1864 Daniel Frost and the Eleventh West Virginia saw considerable action in Virginia. On May 9th, Frost led the Eleventh during the Union victory at the Battle of Cloyd's Mountain in Southwestern Virginia. After the battle, Frost was commended by his commanding officer.

Over two months later, Frost and his men found themselves in a difficult position during the Battle of Cool Springs (also known as the Battle of Snicker's Gap) in the Shenandoah Valley. A single Federal division found themselves trapped along the banks of the Shenandoah River, with a much larger Confederate force to their front and the river in their rear. Frost commanded one of three Union brigades within the trapped division, and when the Federal right flank began to buckle, Frost was ordered to wheel his men to the right and repel the attackers. The maneuver exposed Frost's brigade to a devastating fire, and "while bravely performing this duty [Frost] fell mortally wounded."[8] Frost was taken to a nearby farmhouse, where he lived long enough to write a will. He died around midnight on July 19, 1864, as Union forces retreated in defeat.

Col. Daniel Frost's funeral was held in Wheeling. As the Wheeling Intelligencer recorded, "It was a most solemn and impressive scene, and there was many a full heart a many a moistened eye as the procession moved slowly through the streets, bearing the mortal remains of a gallant soldier to his last resting place."[1] He is buried in Mount Wood Cemetery in Wheeling. In 2016, as part of an effort to commemorate the Civil War and West Virginia sesquicentennial, a marker was placed in Ravenswood to commemorate Daniel Frost's legacy in West Virginia history.