In the midst of the Great Depression, the Briarwood Estate, also known as the Bingham House, located in Virginia Beach, Virginia, was built in 1932 by James and Francis Bingham as a family estate. The property was listed in the National Register of Historic Places and the Virginia Landmarks Register in 2012. The home, originally built at six thousand square feet, exhibits a Tudor Revival style on four acres of land in the neighborhood of Linlier. The original architect of the home was Norfolk native Wickham Taylor. Taylor is most well known for designing commercial buildings, churches, hospitals, and residential such as the Briarwood property. With the passing of both James Bingham and his wife, Francis, the property was given to the Norfolk City Union of the Kings Daughters in 1963 as specified in the Bingham's will. Since the 1960s, the Briarwood property has been home to four other families. 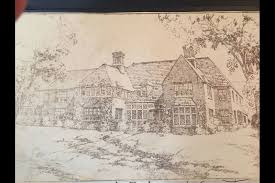 Overlooking Linkhorn Bay, the Briarwood Estate was first constructed on a four-acre lot in 1932. The land on which the estate still stands was first purchased in July of 1924 by James and Bingham Jr. and wife, Francis from Harrie L. and Carrie T. Bullis. The 4.05 acre estate was purchased for $6,500. The final cost of construction eight years later amounted to an estimated $40,000-$50,000. This could be considered a heavy sum of money in the midst of the Great Depression.

Norfolk native, Wickam C.Taylor, was the main architect hired by the Bingham's for the Briarwood project. Taylor was well known in the Tidewater region for his construction of both residential and commercial buildings, some of which include the Norfolk Naval Base as well as Selden Hall. Clarence W. Meakin is also thought to have assisted on the construction of the Briarwood Estate, acting as the primary designer and craftsman. Like Taylor, Meakin was also highly regarded in the area with work on the expansion of Norfolk General Hospital, and partnership with Taylor on Selden Hall. In addition, builder Clayton Q. Nugent also worked with the architectural team on the Briarwood estate, as well as many of the previously mentioned buildings.

The Tudor Revival style architecture, which reached its peak of popularity in the United States in the years between 1890 and 1940, has its roots in sixteenth century England. The Briarwood Estate completely embodied the Tudor Revival Style with “brick exterior with decorative patterns; false half-timbering; large chimneys with decorative chimney pots; steeply pitched roof; tall, narrow windows with leaded panes; rounded arch doorways; and semi-hexagonal bays.”

Inside the home, the interior contains a grand entry hall, with dark stained walls and diamond paned leaded glass, in addition to a second story balcony. The original flooring, made of hand-pegged boards, is still intact, and spreads throughout the home. In the north wing of the Briarwood estate lies the dining room, kitchen, bathroom, and servant spaces; a commonality for the wealthy at this time. Also present in the North Wing is a screened in porch added in the 1950s, and is believed to have been used for the purpose of a staff entrance to the kitchen and dining spaces.

The South Wing contains a living room, library, and solarium. The living room is quite extravagant with paneled ceiling beams, and hexagonal window bays. In contrast, the library is quite simple with a sampling of stained glass windows and built-in book cases. The Solarium, or room to bring light into the house has a flagstone floor and windows with metal glazing to attract optimum sunlight.

The second floor features four bedrooms and baths. The tudor style roof lines cause irregular room shapes; however, the walls still have the original plaster and the flooring and six inch baseboards are still intact. Most of the bathrooms have been renovated over time, but one original bathroom remains, designed with black and white tile throughout.

The original Briarwood Estate included a long driveway lined with mature trees that extended from the street to the estate and a two-car garage. The long driveway is now a street with several residences on either side. In the second half of the twentieth century, a 1980’s style patio and swimming pool were added to the property.