Vineyard Hills was once the site of a thirty-one-acre vineyard owned and operated by Reverend John Peter Kreusch (1818-1888), the longtime parish priest of St. Alphonsus Church in Wheeling. Established sometime in the early 1860s, Father Kreusch’s vineyard produced on average 14,000 gallons of wine annually, which was distributed to parish churches throughout the city and the surrounding area to be blessed and then used in their religious services. At the time, it was one of the largest wine-making operations in Wheeling. Father Kreusch died in 1888, but his vineyard continued operating until 1890. Since then, Vineyard Hills has been transformed into a residential area. 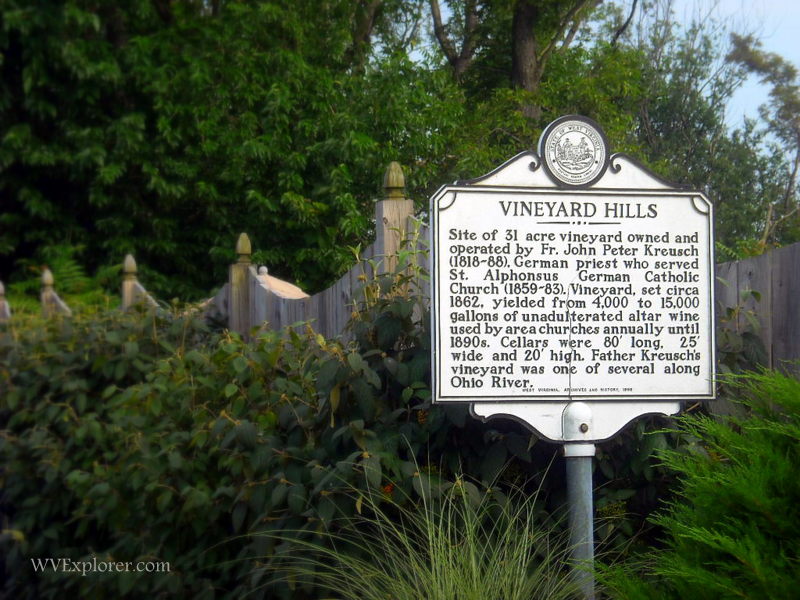 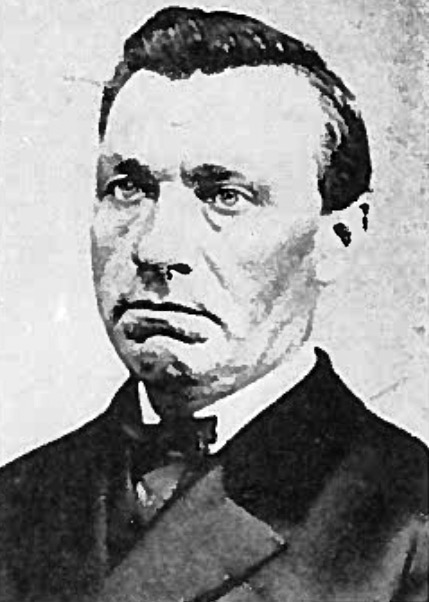 Map of Wheeling identifying the location of Father Kreusch's vineyard (1877) 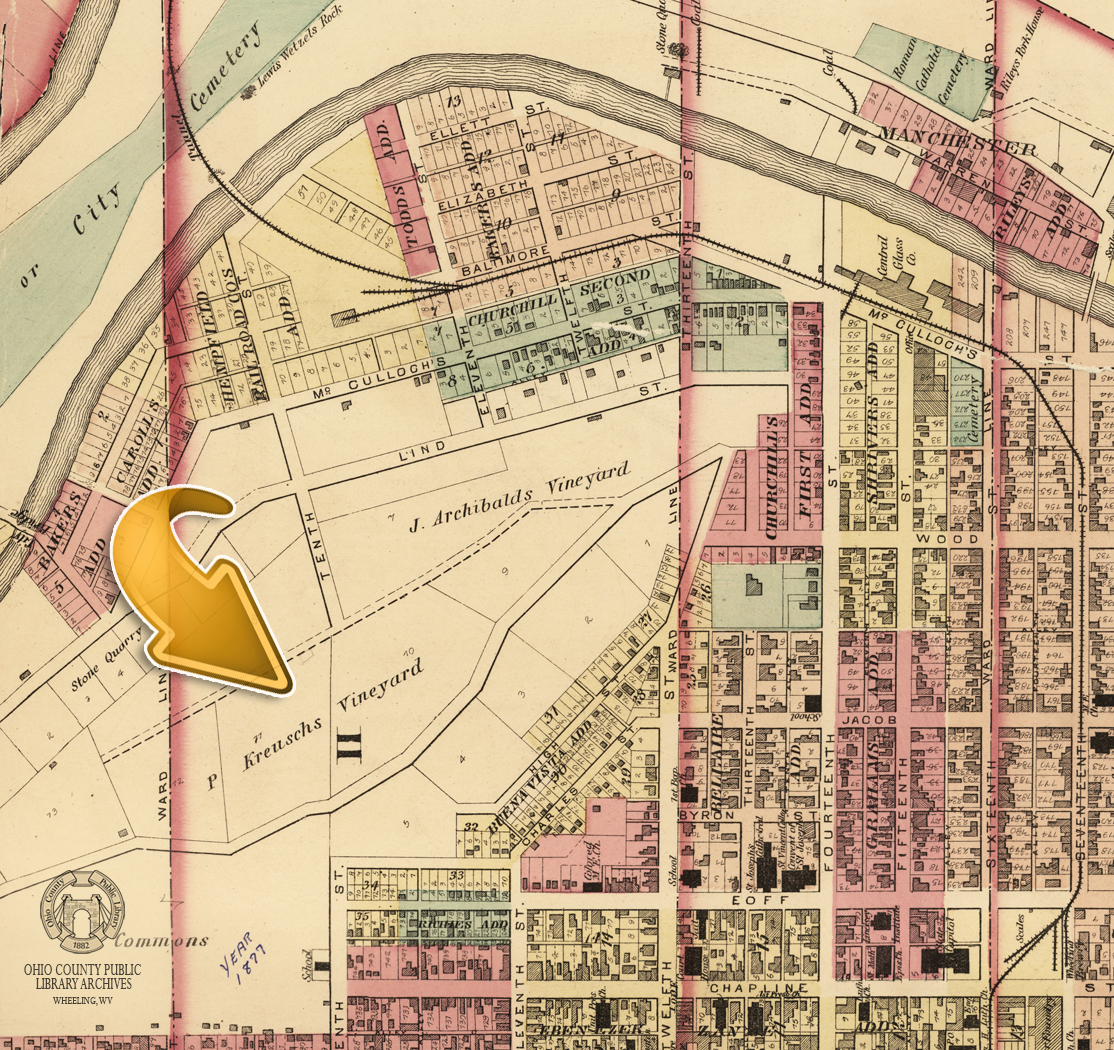 The story of Wheeling’s Vineyard Hills begins with that of Reverend John Peter Kreusch. Kreusch was born to a respectable family in Longuich, a small town in Rhenish Prussia (now Germany), in December 1818. While still very young, his parents died, forcing him to scratch out an existence laboring in various jobs. One such job was that of a farm hand on a vineyard. Despite the tough hand that life dealt him, the young boy dreamed of one day becoming a priest.

In 1842, Kreusch immigrated to the United States, settling in Cleveland, Ohio. Under the guidance of Bishop Rappe, he gained enter into a seminary. After years of hard work and perseverance, Kreusch was ordained a priest by Rappe in November 1848 at the cathedral in Cleveland. During his first few years as a priest, he served as a missionary, attending to the sick and helping to build new churches. The task was often arduous; the young priest frequently traveled long distances on horseback, rain or shine.

Father Kreusch’s time as a missionary came to an end in 1858 when he was assigned to St. Alphonsus Church in Wheeling, West Virginia. At the time, the parish was relatively young; construction on the church having been completed only two years prior to Father Kreusch’s arrival. As the new parish priest, Kreusch served 1,661 souls from 356 families who came from Wheeling and the surrounding area. Much like their new parish priest, the parishioners were overwhelmingly ethnic Germans, many of whom had just recently arrived in the United States. Kreusch’s ethnic origins and native tongue may have influenced his selection as the parish’s new priest.

Sometime in the early 1860s, after receiving the blessing of his diocese’s bishop, Father Kreusch began courting investors to purchase land to establish a vineyard with the goal of providing unadulterated altar wine for the parishes in the area. Won over by his credentials not only as a priest, but also a former vineyard farm hand, investors gave Kreusch the amount of money necessary to purchase a large swath of land on a hillside in town overlooking his church. There, on what became known as “Vineyard Hills,” the parish priest of St. Alphonsus planted, harvested, and processed roughly thirty-one acres of Catawba and Concord grapes. At the time, it was one of the largest wine-making operations in Wheeling.

In all, Father Kreusch’s vineyard was a stunning success. In each of the first three growing seasons, the vineyard produced on average 14,000 gallons of wine, which made their way to parish churches throughout Wheeling and the surrounding area to be blessed and then used in their religious services. Father Kreusch’s vineyard did, however, endure hardships and have its critics. In the spring of 1869, a large hailstorm obliterated the grape crop. This, coupled with a severe illness that confined Father Kreusch to his bed for several months in 1870, led diocesan leadership and some investors to question the enterprise and the amount of time it was taking away from Kreusch’s other duties.

In 1883, after serving St. Alphonsus Church for twenty-five years, Father Kreusch resigned his position and retired to his beloved vineyard. Five years later, in early May 1888, he passed away. His remains are buried in Mt. Calvary Cemetery in Wheeling.

Father Kreusch’s vineyard outlived him, continuing operation until 1890. Since then, Vineyard Hills has been transformed into a residential area, containing public housing projects and single private residences. In recent years, however, the non-profit Grow Ohio Valley has continued the agricultural tradition of Vineyard Hills by establishing two greenhouses, a few vegetable gardens, and an apple orchard on the land that once hosted Father Kreusch’s beloved vineyard.

In 1996, the West Virginia Highway Historical Marker Program of the West Virginia Archives and History installed a marker on Vineyard Hills to commemorate Father Kreusch and his vineyard. It stands along Grandview Street in Wheeling.