This is the final resting place of Apache leader Geronimo. Born on June 16, 1829, and given the name named Goyahkla, Geronimo led his people as they sought to defend their land and way of life in the late 19th century. After his family was murdered by Mexican soldiers, Geronimo became motivated to avenge their peril and defend his tribe from attempts by the United States and Mexico to acquire Apache land. Geronimo led Native Americans who refused to accept the reduction of their lands and sovereignty, clashing with soldiers in some of the last of major battles between Natives and the United States. After years of evading capture and leading raids, Geronimo was captured. After over two decades as a prisoner, Geronimo died from pneumonia on February 17, 1909, while held in capacity in Fort Sill. The grave is located in the midst of a larger cemetery and sometimes is littered with small items left behind by tourists who believe leaving trinkets at the grave site may bring good luck.

Geronimo's grave site featuring the spread-winged eagle perched on top. This is seen as a monument to all of the Apache prisoners of war. 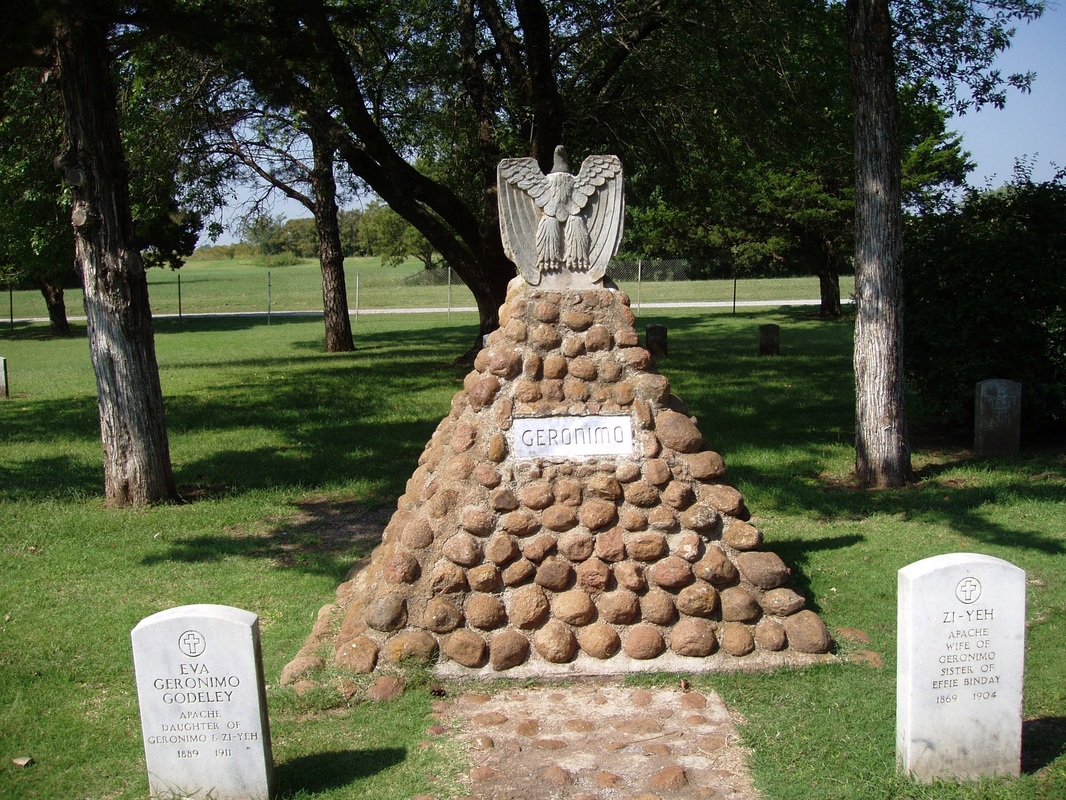 An example of some of the trinkets that are often left at the grave site. This includes jewelry, coins, cigars, dog tags, and more. 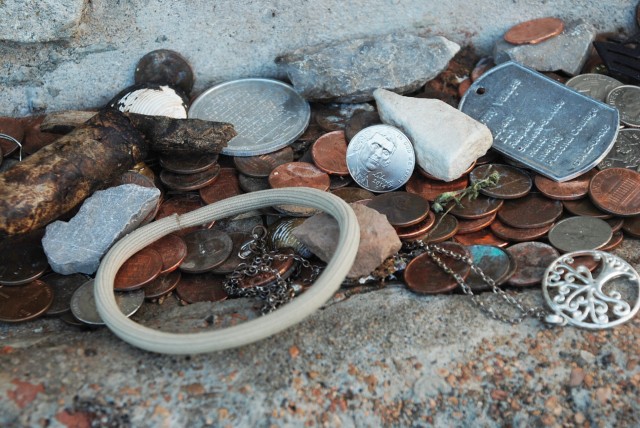 Geronimo, an Apache leader who was fearless in battle, posing with a rifle. 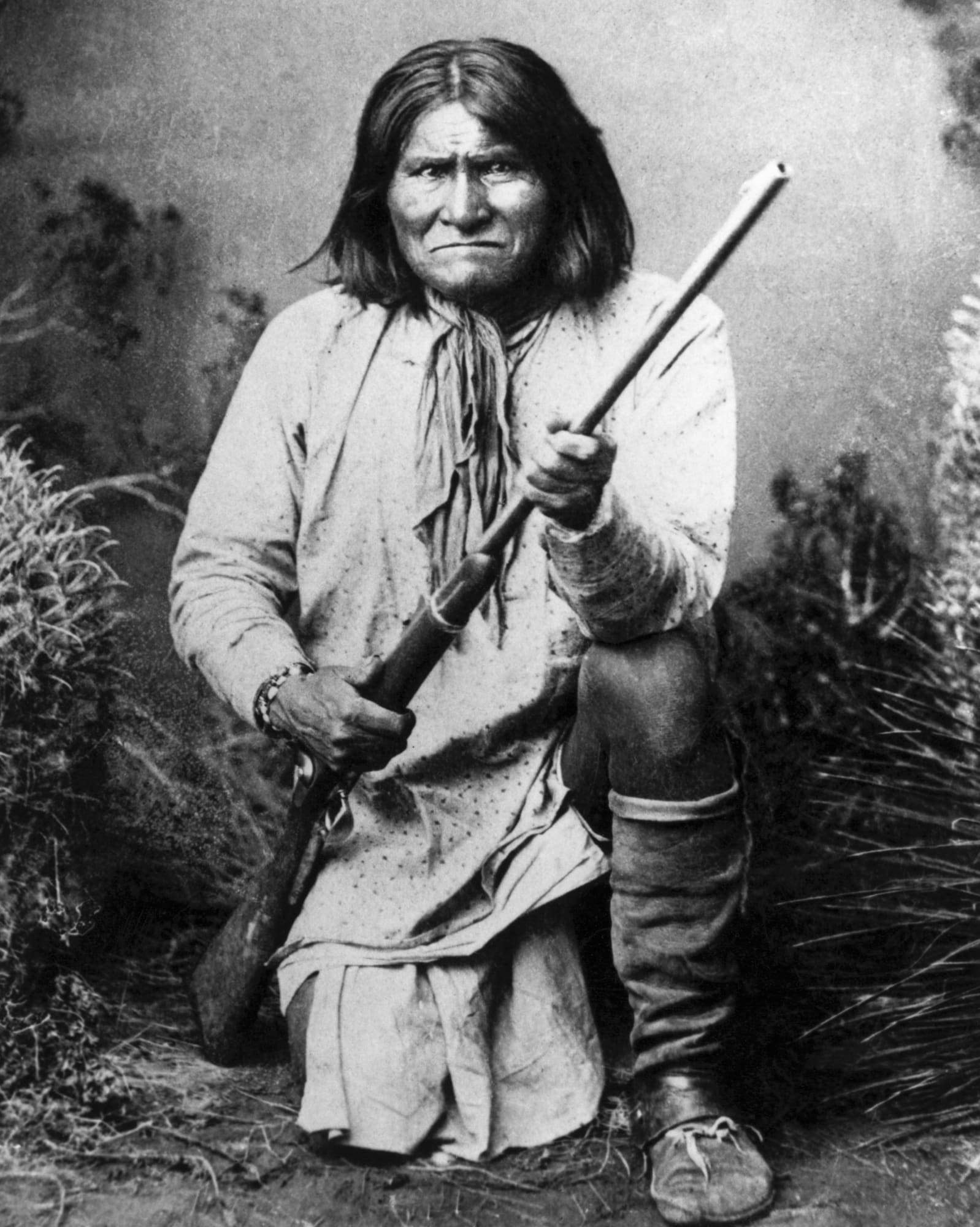 Geronimo stands with other Apache warriors, women, and children shortly before their surrender to Gen. Crook on March 27, 1886. 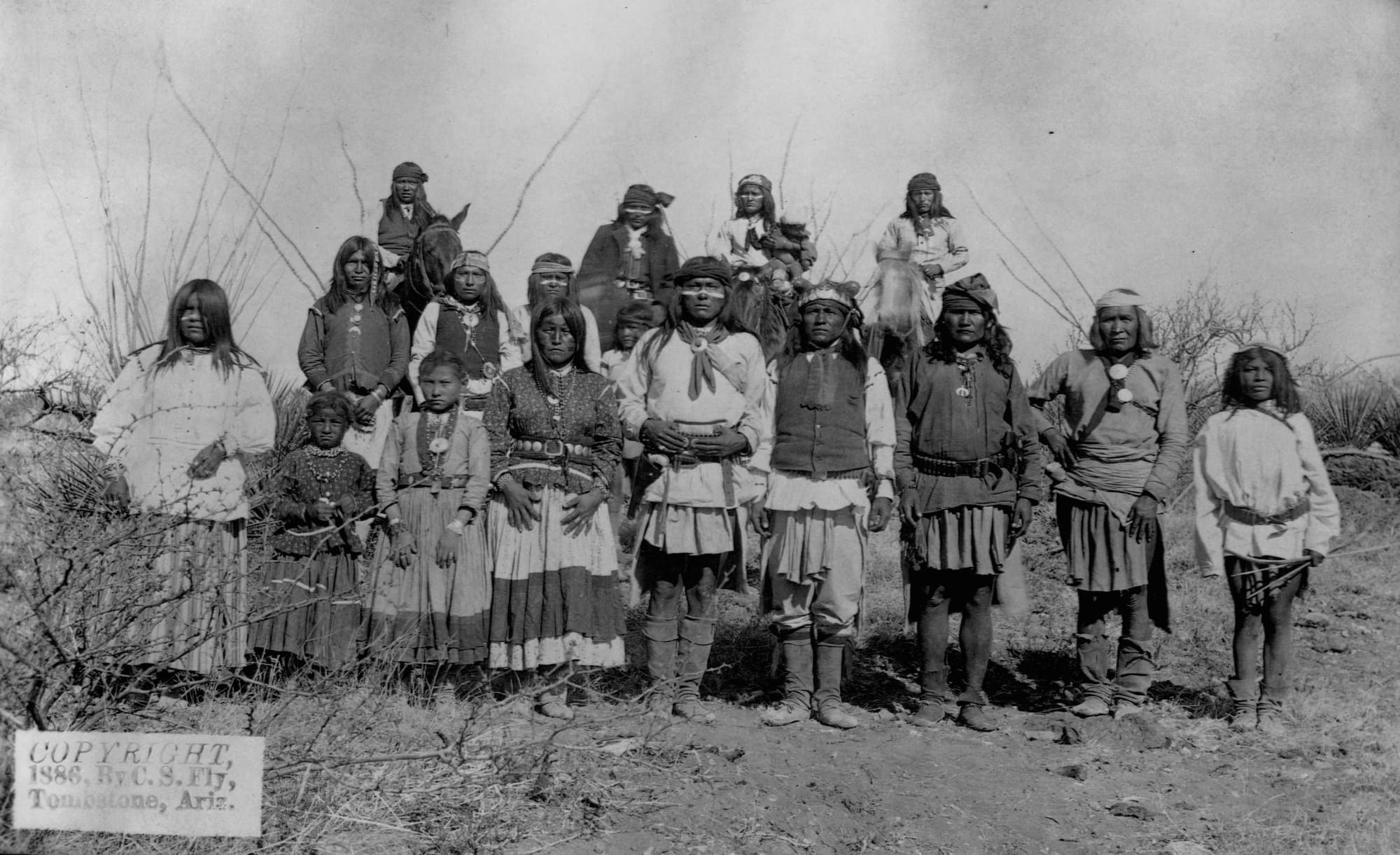 Geronimo was born in No-Doyohn Canyon Mexico, now Arizona, on June 16, 1829. At birth, he was named Goyahkla, meaning "one who yawns." It is not certain of exactly where the nickname Geronimo came from. Some believe it is simply a mispronunciation of Goyahkla while others believe it is from the cries of Mexican soldiers shouting for St. Jerome while in battles against tribes led by Geronimo. Either way, his name has become a lasting legacy in becoming common for people to shout “Geronimo!” before doing some act of bravery. Notably, this was used by U.S. paratroopers during World War II.

Geronimo was part of the Bedonkohe, a subsection of the Chiricahua tribe of Apaches. Before his adulthood, his people were at war on two fronts: Mexicans to the south and U.S. expansionists to the north. This was also during a time of war with neighboring Comanche and Navajo tribes. While away, Mexican soldiers attacked his family’s camp, killing his mother, his wife, and their children. While observing Apache tradition of burying his family’s belongings, he then headed to the forest to grieve the loss of his family. It was then that Geronimo claimed to have heard a voice saying, “No gun will ever kill you. I will take the bullets from the guns … and I will guide your arrows." This became one of his primary motivations in life, avenging his family.

Geronimo became best known as a fearless Apache leader that was willing to resist anyone who attempted to remove his tribe from their lands. After the Mexican-American War, The U.S. took over much of the land in what is now Southwest America, a lot of this land was the home ground of the Apaches. He repeatedly evaded capture time and time again, but in 1877 he was captured by authorities and sent to the San Carlos Apache reservation. Four years later he escaped and became a part of the last of the Indian wars against the U.S. He eventually became the last of the holdouts resisting the U.S. expansion during the Native American relocation. Even then, it required 5,000 U.S. soldiers – approximately a quarter of the standing army – to get him to surrender. Geronimo spent a total of 27 years as a prisoner of war before ultimately passing away at Fort Sill, Oklahoma. It could be interesting to note that the voice Geronimo allegedly heard in the woods was actually accurate. Rather than dying by a gun, he died of pneumonia at the age of 80 on 17 Feb., 1909. On his deathbed, Geronimo said, “I should never have surrendered, I should have fought until I was the last man alive." This just shows how strongly he felt about defending his peoples and their homeland.

Geronimo now lies buried under a stone eagle with its wings spread wide in the Indian Cemetery in Fort Sill. While alive, he often expressed a desire to return to his homelands in Arizona, but this wish was never met, even in death. More recently, some speculation has risen as to where Geronimo’s body really is. One rumor is that The Order of Skull and Bones, a secret society at Yale University, may have stolen the skull of Geronimo and currently has it stored in the Tomb in New Haven, Connecticut. At the grave site, it has become a sort of tradition to leave an item at the grave as it to donate it to Geronimo himself. It is said that leaving something will bring you luck, so hundreds of people have left coins, jewelry, cigars, and other miscellaneous items behind in the hopes that the lore may be true.