Tucked away in the rolling hills of Southern Indiana, just outside Paoli, rests the Newberry Friends Meeting House. Although built in 1856, the property was bought in 1818 and the cemetary contains graves dating back to the 1840s. The Society of Friends, more broadly know as Quakers, played a significant role in the settlement of Orange County and were active in the Abolitionist movement and worked towards creating safe havens for the settlement of African Americans.The church is now home to the Friends of Jesus Fellowship Friends Church and remains an important historical link to the rich history of Orange County. 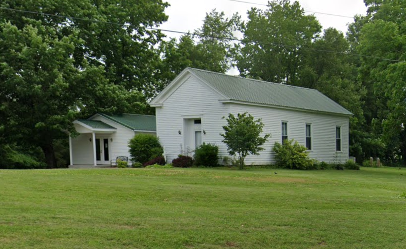 In 1811, a small group of Quakers under the leadership of Jonathan Lindley, a politician and businessman, packed their lives up in a convoy of blue Conestoga wagons and set off from their home in North Carolina. Along with them were several free African Americans, as Quakers were against slavery and were some of the earliest proponents for abolitionism in American. Their journey would bring them the foothills of Southern Indiana. This was the beginnings of Paoli. Guided by their religious beliefs, the Society of Friends established Orange County on a parcel of land purchased from surrounding counties.

The Society of Friends, called Quakers by most, has its roots in England in the 1650s. They live in accordance to the “Inward Light.” Meeting houses were and are the places in which Quakers gather in order to worship, rather than the traditional church. Although services were originally separated by gender, the doctrine nonetheless establishes all as equal in the eyes of God. This is shown notable by the denomination’s involvement with abolitionism, women’s suffrage, and other social reform movements. At the beginning of the Newberry congregation, Quaker doctrine banned practices such as: dancing, fighting, drinking in excess, profane language, not attending meetings, and more.

The land on which the Newberry Friends Meeting house sits is relatively flat compared to the surrounding landscape and was purchased in 1818 for use as a burial ground. Though the Meeting House itself was not built until 1856, the adjacent cemetery contains graves dating back to the 1840s. With plain and noble characteristics, the building is a fine example of the traditional Quaker meeting house as called for by the doctrine. The pre-Civil War structure features a Greek Revival style, rare in its integrity. A line of boards down the center of the one-room church marks where the track for a shutter separating men and women’s meetings before the unification of services at the end of the 1800s.

While seemingly typical of a mid-19th century cemetery, it is important to take note of the African American graves interned here. Quakers were strong in their abolitionist stance, with some later settlers moving from the south the escape slavery, declaring their slaves free once on Indiana soil. The cemetery at Newberry was not only the first, and for a long time the only, place which African Americans were allowed to use in the area. The earliest marked grave of an African American in the cemetery dates to 1871.