The J.C. Lore Oyster House, built in 1934, is one of the few surviving, unaltered, early 20th century seafood processing and packing plants left on the East Coast. Joseph Cobb Lore built his first oyster house here in 1922 and rebuilt after it was destroyed by a hurricane in 1933. Lore shipped oysters as far west as Chicago and at its peak, his oyster house employed over 65 workers. It ceased operations in 1978 and was purchased by the Calvert Marine Museum the next year. It still serves as an exhibit space for the museum and displays much of the oyster house’s original processing equipment. Lore’s Oyster House is open during the summer months and has been a National Historic Landmark since 2001.

The Lore Oyster House has been part of the Calvert Marine Museum since 1979. 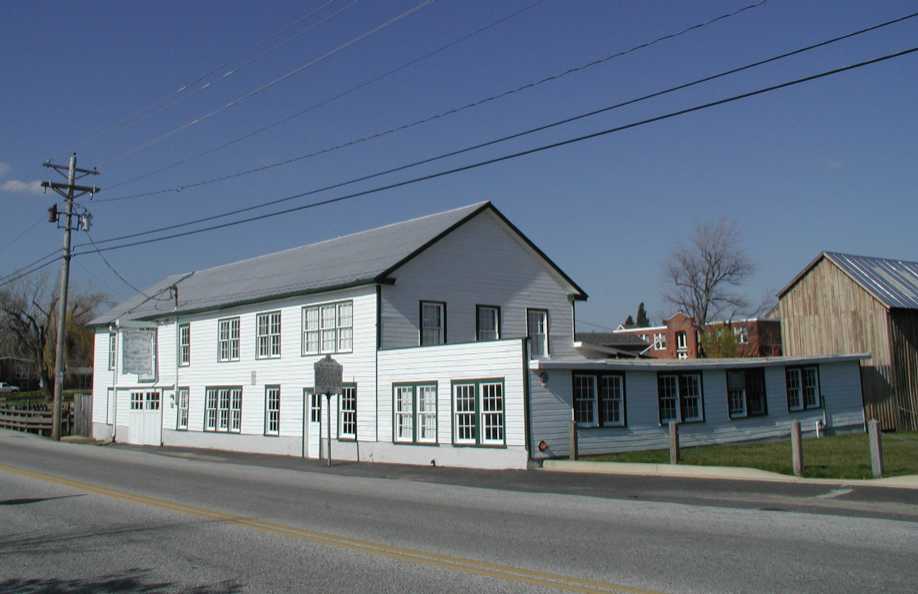 One of the exhibits within the oyster house, to include an oyster blow tank. 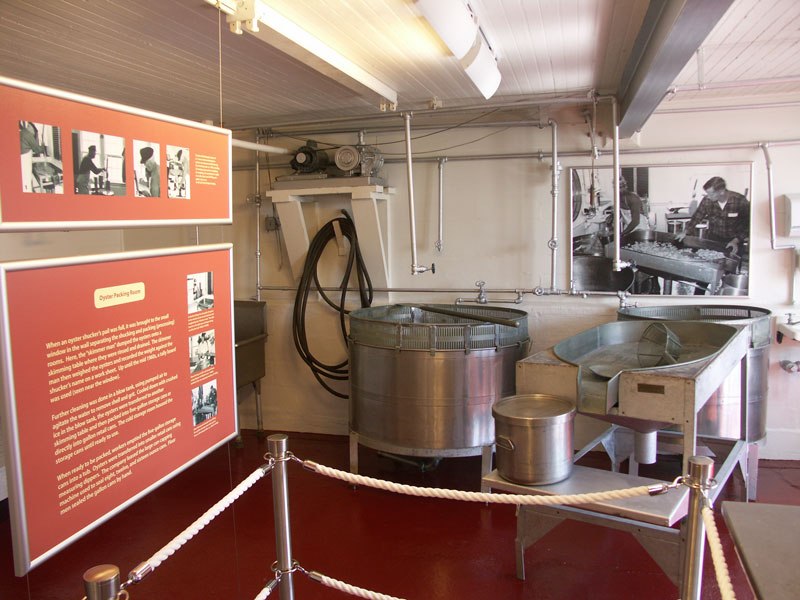 Oysters arrive to be shucked. 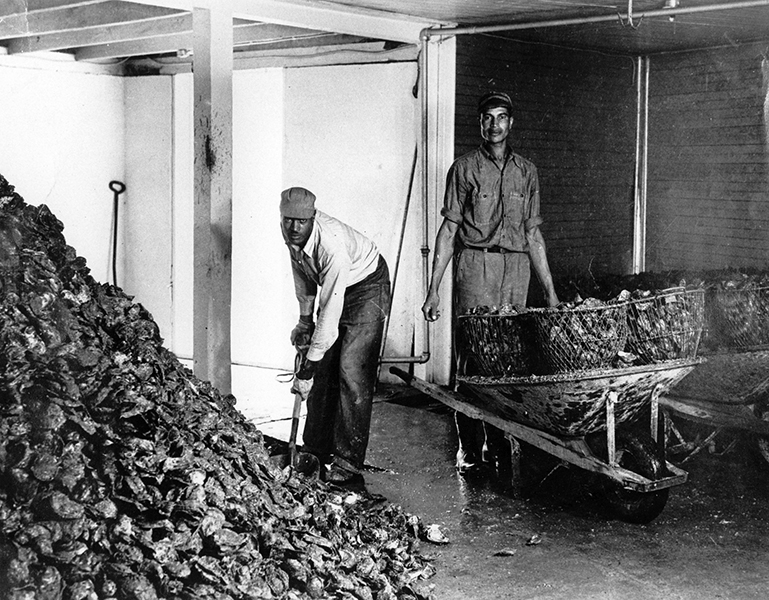 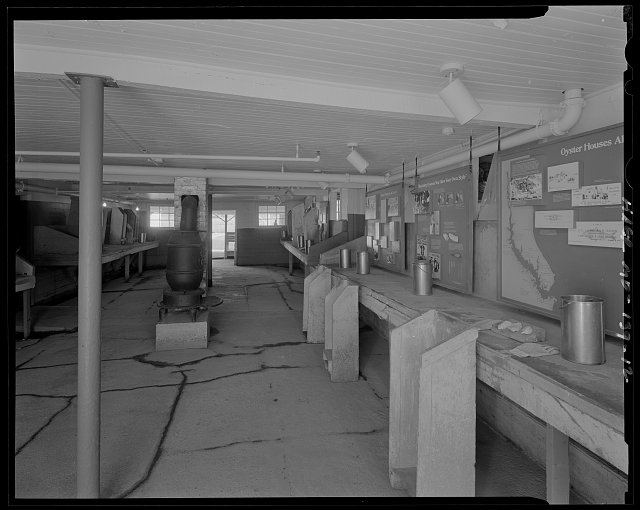 A view of the oyster house from the Back Creek where freshly harvested oysters, crab and fish arrived. 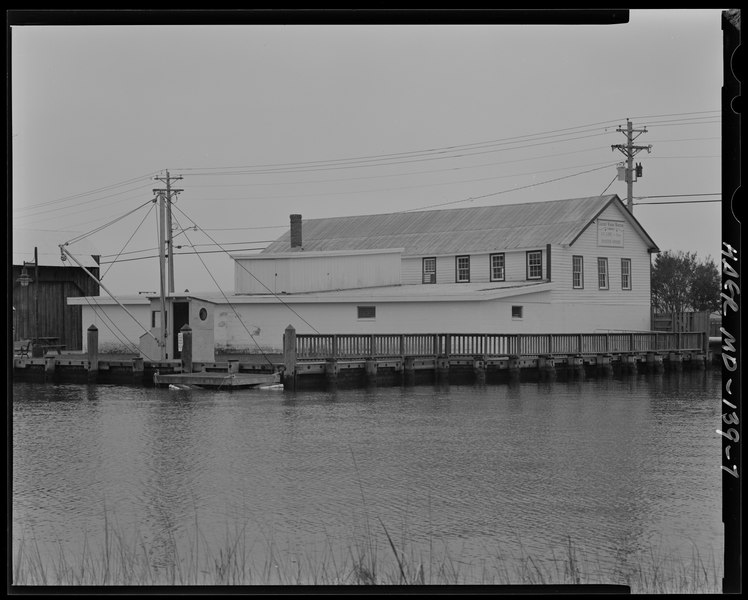 Oysters have been harvested from the Chesapeake Bay and Patuxent River for centuries and oyster beds were so numerous and large that they posed a threat to European vessels when they arrived in the mid-17th century. Soon, colonists began harvesting these oysters and the industry grew around the seemingly limitless supply the bay provided. By the time Joseph Cobb Lore Sr. arrived in Solomons in 1888 at the age of 23 from Newport, New Jersey, there were over 20 oyster houses established along the Patuxent River. Lore came from the Delaware Bay oyster industry, and upon arrival in Solomons, he immediately began to buy and ship oysters back to relatives and associates in the Philadelphia area.

By 1922, Lore was ready to build his own oyster house along the Patuxent River. This oyster house, built on billions of crushed oyster shells, was in operation until 1933 when it was destroyed by a hurricane. Lore then built a new oyster processing and packing facility the next year. He built a two-story structure that was covered by novelty siding and topped with a metal gable roof. The lower half is built of cinder block with sloped, poured concrete floors to resist flooding while the upper half is constructed of wood. Six-over-six sash windows in pairs and triples allow natural light to enter the building and provide ventilation. The rectangular building was divided into four work areas: receiving, shucking, processing and packing. At the rear of the building a pier and quay allowed oyster ships to unload and sell their catch. The only major addition to the building has been the oyster receiving room which was built in 1965.

After the oysters were unloaded, they were transported to one of two shucking rooms within the building. These rooms were lined with concrete shucking tables, shucking stands, shucker’s blocks and buckets. A shucker worked within the shucking stand, a tall, narrow, three-sided box. After removing the oyster meat from the shell, the meat went into a gallon bucket and the shell was discarded on the floor. The shucking stand allowed the discarded shells to build up around the shucker without interfering with their work. Once a bucket was full, it was taken to the processing room where it was weighed, tallied and the meat was thoroughly rinsed. The vast majority of shuckers were local African American men and women who were payed a piece rate per gallon of oyster meat shucked. Pay records left by Lore reveal that they were paid $0.25 per gallon in 1924, $0.35 in 1941, $1.00 in 1952 and $2.50 per gallon in 1974.

After being rinsed, the oyster meat was further cleaned in one of two blow tanks where compressed air and aerated water sifted the meat from the bottom. The meat was then rinsed a final time and packed by hand in various sized metal cans and sealed with a foot-operated machine, which was replaced later by an electric model. Lore oysters were shipped up and down the East Coast and throughout the Midwest.

By the second half of the 20th century, oyster beds within the Chesapeake Bay and Patuxent River were severely depleted and, despite Lore seeding its own oyster beds, the oyster industry in the region began to collapse. In 1978, the J.C. Lore Oyster House ceased operations. The next year, the Lore building was acquired by the Calvert Marine Museum which had been established by the Calvert County Historical Society in 1970. Also in 1979, the museum became an independent entity and has since expanded its holdings and exhibit space within the county. The Calvert Marine Museum has restored the Lore Oyster House to its mid-20th century appearance and maintains much of its original equipment, such as two blow tanks, two skimmers, scale, canning machine and shipping containers. The oyster house is open for tours during the summer months. However, during high tide it is prone to flooding and closes during such events.