Our Lady of Lourdes Catholic Church

Our Lady of Lourdes Catholic Church is one of the first Roman Catholic African Americans to be established in the Atlanta It was founded by Rev. Ignatius Lissner in 1911 who also received funding from Saint Katherine by November 1912. On November 23rd, 2013, the Georgia Historical Society recognized Our Lady of Lourdes Catholic Church as a historical marker.

Our Lady of Lourdes Catholic was classifed by the Georgia Historical Society as a historical landmark in 2013. It is marked for African American History, Religious History, and Civil Rights. 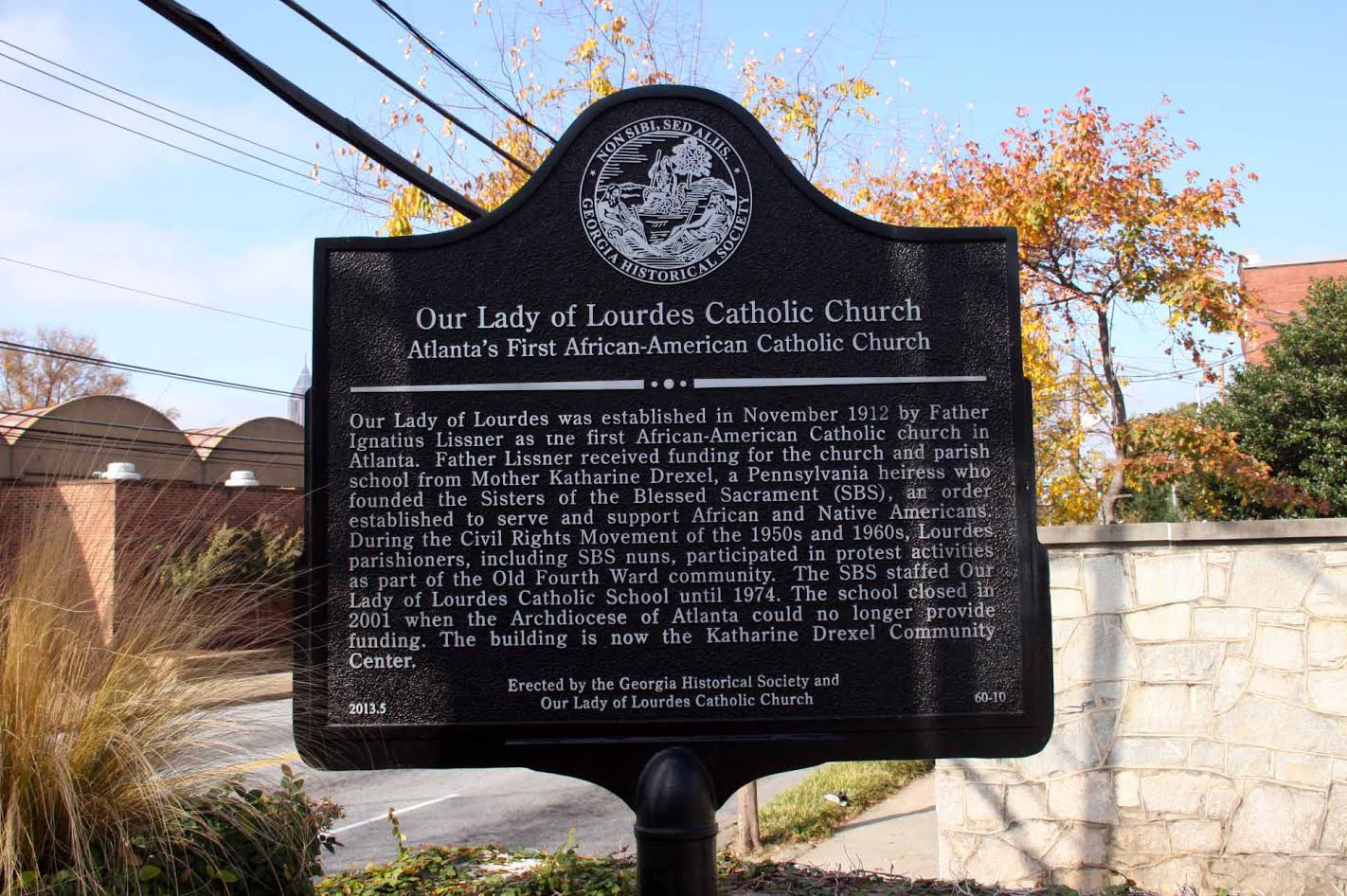 Our lady of Lourdes was founded by Reverend Ignatius Lissner of the Society of African Missions. During the period, his search for a foundation for the church was met with heavy anti-black and anti-Catholic sentiment from the community. African Americans and even Catholics were being unjustly during in the early 20th century as well. Attempts to establish a business or even a parish during this period was hard for an African American and Catholic. However with help from J.J. Spalding, a member of a nearby Sacred Heart parish, Reverend Lissner was able to to successfully purchase the land later in March 1912. The construction of the building was finish later that year in November.

Reverend Ignatius Lissner was a French-born Catholic priest was persistent in developing the ministry within the Catholic church in the United States for African Americans. He is one of the first to be a part of the Society of African Missions. This missionary focused on helping and serving Africans and other of African descent in the United States. Reverend Lissner was aware of the lack of organized cared for African American Catholics. For several years after 1897, he went to work and establish multiple parishes and parochial schools, including our Lady of Lourdes.

During its founding, Our Lady of Lourdes was focused inside of one building. The building contained three floors which were the church on the first floor, classrooms for the school on the second floor, and a Parish hall on the top floor. Our Lady of Lourdes Catholic School on the second floor would continue to operate until 2001 when the Archdiocese of Atlanta could not afford anymore funding for the school. Today, the original building for the church is still in operation and currently used for Sunday school classes, choir rehearsals on the third floor, and the Drexel Institute of Arts.

Our Lady of Lourdes is recognized by the Georgia Historical Society as a historical landmark in the Old Fourth Ward community. The Old Fourth Ward community is a neighborhood on the eastside of Atlanta, Georgia. This community has a rich history and foundation for the Civil Rights movement as several other landmarks are in the area. This area also holds the birthplace and home of Dr. Martin Luther King, Jr, one of the most influential leaders of the Civil Rights movement. His home is found on Auburn Avenue, only a 5 minutes walk from the church. Our Lady of Lourdes has been an active participant in the Civil Rights Movement in Atlanta as it was still highly segregated in the 1950's to the 1960's. Nuns, parishioners, and other members participated in the protest activities during that time. Today, the church is amid the Martin Luther King Jr. Landmark district.