The Statues of Thomas Spratt and King Hagler

Dedicated in 2014, the sculptures of Thomas "Kanawha" Spratt and King Hagler commemorate the pair's great friendship and the enduring legacy they leave behind in Charlotte, North Carolina. Thomas Spratt was a wealthy European settler, while King Hagler was the chief of the Catawba Tribe. However unlikely their friendship may have been, King Hagler and Spratt became close friends, aiding one another in various tasks, and proving the possibility for true peace between colonists and Native American tribes. Today, the statues of Spratt and Hagler stand as part of the Queen City's Trail of History along the Little Sugar Creek Greenway.

The statues of Thomas Spratt and King Hagler. 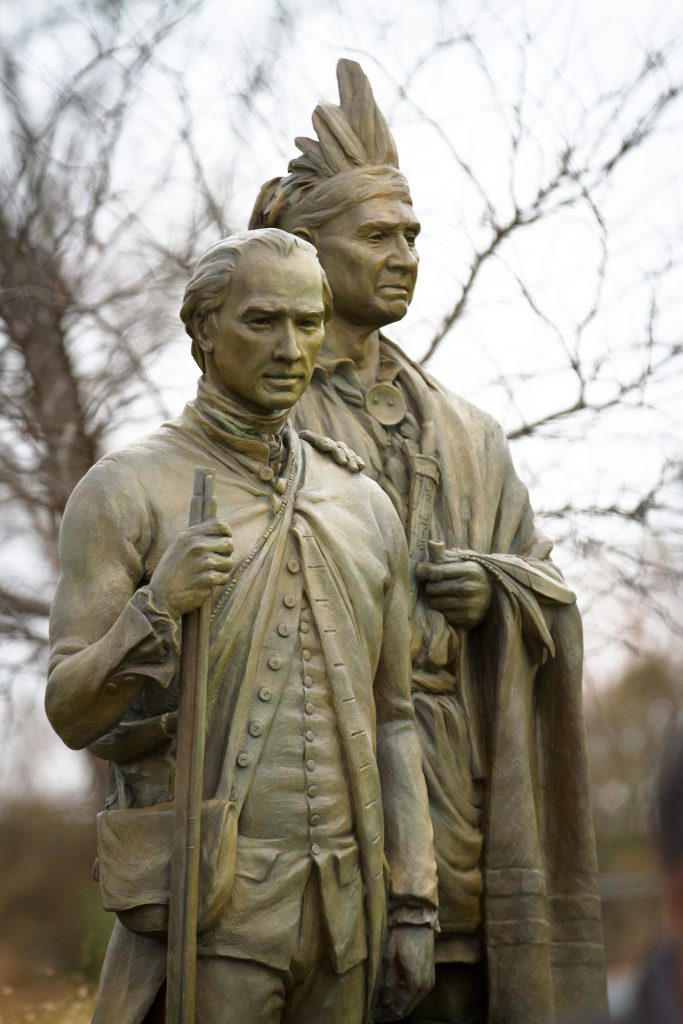 Thomas Spratt was one of the earliest settlers of what is now Mecklenburg County, coming with his family from Pennsylvania to settle in North Carolina in 1750. Around 1753, Thomas moved to land on Twelve Mile Creek to farm it for his father. During this time, Spratt became friends with the Catawba tribe of Native Americans, who lived near the plantation and had occupied the land for hundreds of years before settlers came to the area. The Catawba people were known to be friendly to settlers, as they frequently protected the Europeans from attacks by the Shawnee and Cherokee people. He soon began accompanying the Catawba people on hunting and war parties, which eventually led him to receive the nickname "Kanawha" after fighting alongside the Catawba against the Shawnee on the Kanawha River in present-day West Virginia.

Around the same time that Thomas Spratt began working the Twelve Mile Creek plantation for his father, King Hagler became the Chief of the Catawba people, being elected by tribal consent. The Catawba people had been through several hardships before Hagler's advancement to Chief, having been ravaged by the smallpox epidemic brought by European settlers, which killed the majority of their population. After this period of immense hardship, the Catawba people looked to Hagler for his strength, intelligence, and fierceness. The use of the title "King" instead of "Chief" was meant to communicate the importance of Hagler's position within the Tribe to European settlers. King Hagler was known for being both a peacemaker between the Catawba tribe, colonists, and other tribes, as well as a fierce warrior and leader.

While King Hagler was well-loved by his people and thrived in his position, he noticed that the Catawba land was being increasingly encroached upon by European settlers. In order to claim what land he could for his people, King Hagler negotiated a compromise with the colonial government. As a result of this negotiation, the Treaty of Pine Hill granted the Catawba Native American tribe 225 square miles of land along the Catawba River in 1760. While the Catawba tribe did not receive rights to all the land that they should have, the Treaty of Pine Hill allowed King Hagler and his people to claim a certain portion as their own. Thomas Spratt's inherited land was within the southern edge of this land grant. Like many other settlers, this meant that Spratt leased the land from the Catawbas. For the rest of his life, Spratt lived on this land with the Catawbas. A Shawnee war party killed King Hadler in 1763. Even after Hagler's death, Spratt continued to live peacefully on this land until he died in 1807, acting as an adviser to the world of the settlers and friend to the Catawba people.

The statues of Thomas "Kanawha" Spratt and King Hagler stand in front of the Philip L. Van Every Culinary Arts Center at Kings Drive and 7th Street, as part of Charlotte's Trail of History, which runs along the Little Sugar Creek Greenway. The bronze statues were commissioned by local historians and created by the Charlotte-born artist Chas Fagan.