The big Greek Revival house at the top of the hill was the town residence of Grandison D. Royston, a well-respected lawyer who also owned a plantation several miles north of town on the Southwest Trail. Easily identified by its colorful “four seasons” sidelights and large center hallway, the Royston Town House is mostly decorated to represent the styles of 1840-1860. Besides an attorney, Royston was an experienced statesman, serving as the first state representative for Hempstead County and Speaker of the House. He also served one term in the Confederate Congress. He was also a delegate for two Arkansas constitutional conventions: the 1836 convention for the first constitution at statehood, and the 1874 convention that exists to this day. Royston also served as a soldier in the Mexican-American War. This house is available regularly on guided tours 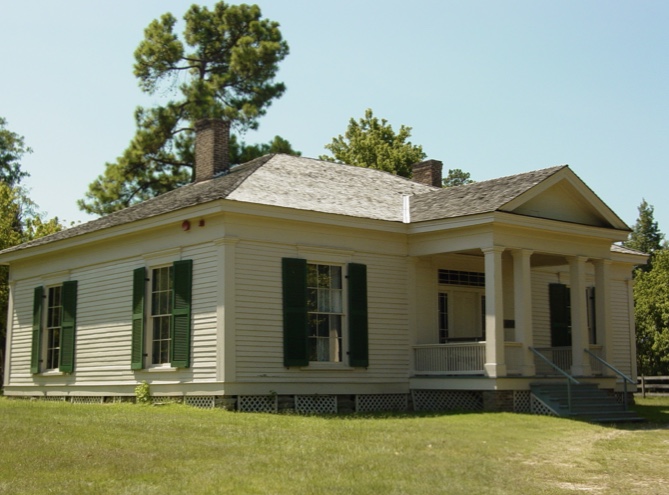 The Tennessee-born Royston established his Washington law practice in 1830, and his office was originally at the foot of the hill. The house was also “L”-shaped: the left-back room was a porch, but in the 1840s Royston had the space enclosed and turned into a home office/guest room with an exterior entrance. As hallways served as social spaces then, the main center hallway is wide enough for large gatherings, with doorways at either end which could be opened to allow a breeze through. As was the practice in the early 1800s, the bedrooms were located at the front of the building. A bed and army chest belonging to Royston himself sit in the master bedroom. The dining room is in the right back, closest to the separate kitchen, which sat in the corner of the present-day fencing. The no-longer existent Alexander Street ran closer to the back of the house, which meant visitors could make it easier to Royston’s home office. In this office is one of Royston’s desks, which is also full of books belonging to his practice.