The James B. Duke Statue

Dedicated in 2018, the Trail of History's James Buchanan Duke sculpture stands at the corner of South Kings Drive and Morehead Street as a reminder of Duke's great economic and philanthropic contributions to Charlotte, North Carolina and much of the surrounding area. The complex figure James Duke is primarily known for his role as a businessman, as he was an instrumental figure in the industrial revolution and started a number of industries which continue to thrive today. The accomplishment he tends to be most celebrated for is the Duke Endowment, which continues to support universities, rural churches, and non-profit hospitals near the Queen City today. Due to efforts of local historians, James Buchanan Duke is now memorialized at the corner of South Kings Drive and Morehead Street in honor of his drive, creativity, and benevolence.

The James B. Duke statue. 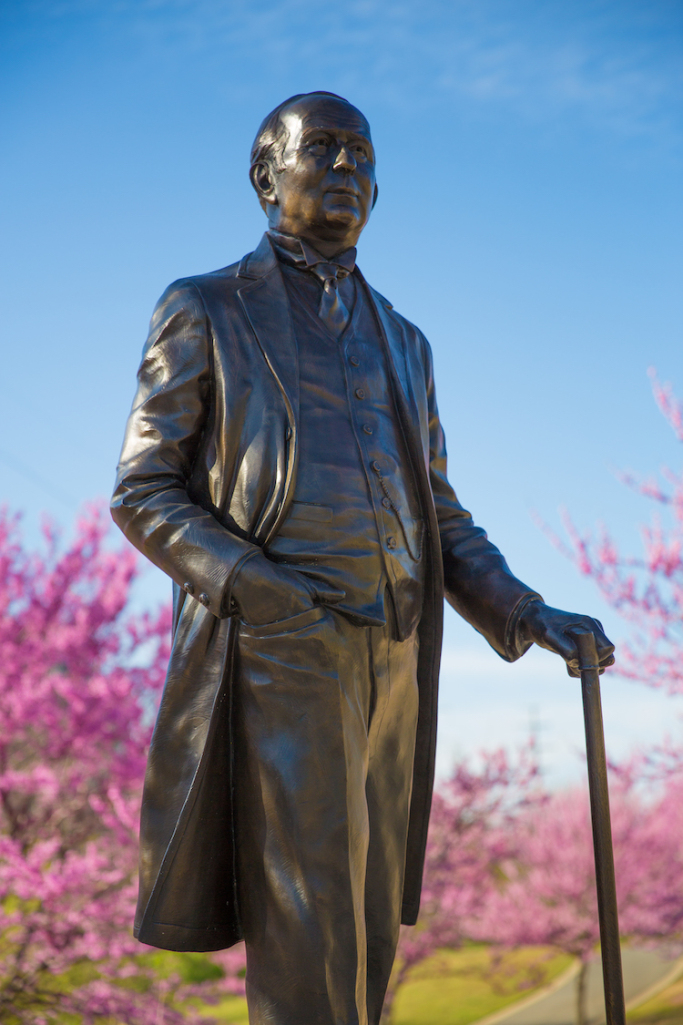 James B. Duke in reality. 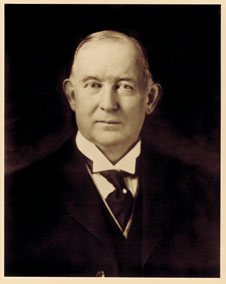 James Buchanan "Buck" Duke (1856-1925) is an American businessman known for his instrumental role in the industrial revolution and his philanthropic pursuits. J.B. Duke was born near Durham, North Carolina, and was educated in the practices of his family's businesses of farming and manufacturing from an early age. In the 1880s, James Duke began to put this education to use and innovate his family's traditional practices, transforming the success of his family's tobacco manufacturing company, W. Duke, Sons and Co., through the implementation of the mass production of cigarettes, lower prices, and effective advertising techniques. Within five years of J. B. Duke's involvement with the factory, it was producing half the country's total production of cigarettes. By 1904, the Dukes' American Tobacco Company was one of the largest corporations in the word, with James Duke serving as the Company's president. The American Tobacco Company was wildly successful until 1911, when the U.S. Supreme Court order the dissolution of the tobacco trust due to its monopoly of the market.

By the point James Duke began his stint as the president of the American Tobacco Company, he had become wildly successful. He decided that in order to continue to develop industry in the south, major infrastructural changes must take place in regards to the south's production of electricity. In the early 1900s, James began acquiring land and water rights along the Catawba River. He partnered with Dr. Gill Wylie and William States Lee Sr. in order to found the Charlotte-based Southern Power Company, which became Duke Energy. James's vision for a flourishing, electrified Charlotte and south came to fruition in his production of Duke Energy, as the company continues to use the water of the Catawba River and hydroelectric energy techniques (among others) to provide energy for the Queen City's various industries. Today, Duke Energy remains the second largest investor-owned hydroelectric company in the U.S.

James's success flourished in the banking, textile, and railway industries as well as the tobacco industry during the industrial age. In 1914, James B. Duke used his power as the president of Southern Power & Utilities Co. (later known as Duke Power) to sponsor the Piedmont and Northern Railway Company, dubbed the "Great Electric System of the South." The Piedmont and Northern Railway Co. stretched from Charlotte to Mt. Holly, N.C. and prospered until the widespread ownership of automobiles began in the 1920s, contributing greatly to the textile industry.

Along with James's education in business and industry, the Duke family also instilled J.B. Duke with a philanthropic mindset which was encouraged by the family's Methodist faith. Perhaps the greatest display of Duke's generosity took place in 1924, when James Duke established the Duke Endowment, one of the largest private foundations in the United States today. The Endowment transformed Trinity College into Duke University in honor of James's father, Washington Duke, and continues to support Duke University, Davidson College, Furman University, and Johnson C. Smith University, as well as various non-profit hospitals, child care institutions, and rural Methodist churches throughout the Carolinas. Shortly after he established the Duke Endowment trust fund, James Buchanan Duke died on October 10th, 1925 in New York City, N.Y.

James B. Duke is ultimately a deeply complex figure, whose legacy is both uplifted by his connection to philanthropic pursuits like the Duke Endowment and sometimes diminished by his role in creating the modern cigarette and violating anti-trust laws. While many have chosen to celebrate J.B. Duke's enormous, positive contributions to the Charlotte community, his complexity is something which remains a relevant issue when considering the legacy he left behind. Like many other prominent figures, Duke's legacy can remind us that even the most celebrated individuals are still humans with complicated histories.

Today, the statue of J.B. Duke stands near the corner of Kings Drive and Morehead Street in Charlotte, North Carolina as a result of funds raised by local historians of the city. It was created by the Michigan artist J. Brett Grill. James B. Duke's sculpture has been part of the Queen City's Trail of History since 2018, a series of twenty statues of significant contributors to Charlotte's development. The Trail stretches along the Little Creek Greenway between Seventh Street and East Morehead Street.