The Wildt and Clark graves lie close to the Humphreys Monument at the center of the Cemetery. 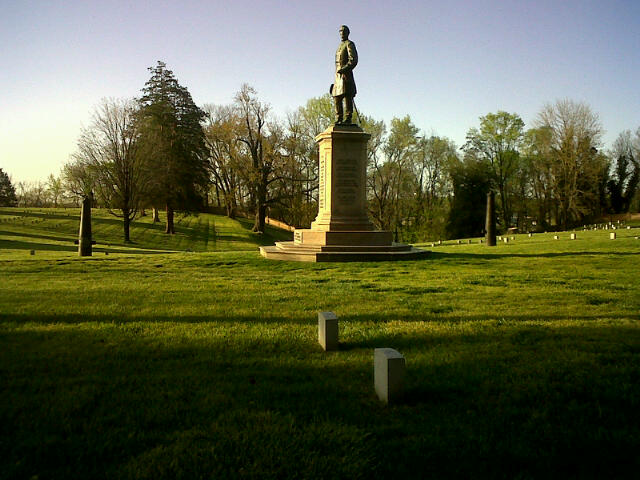 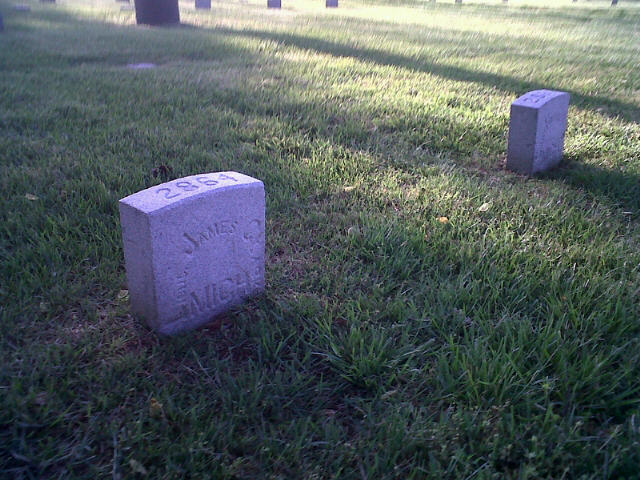 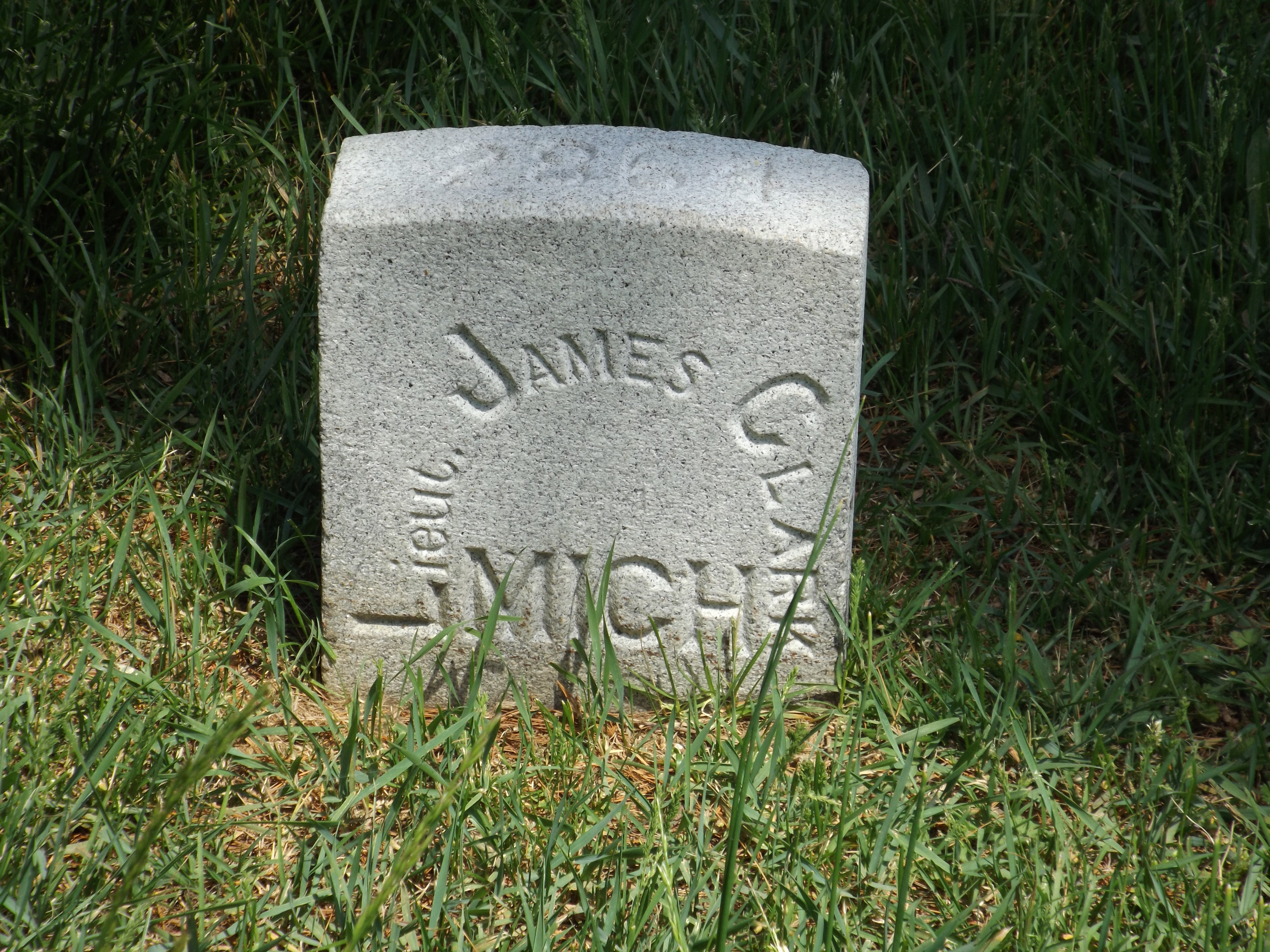 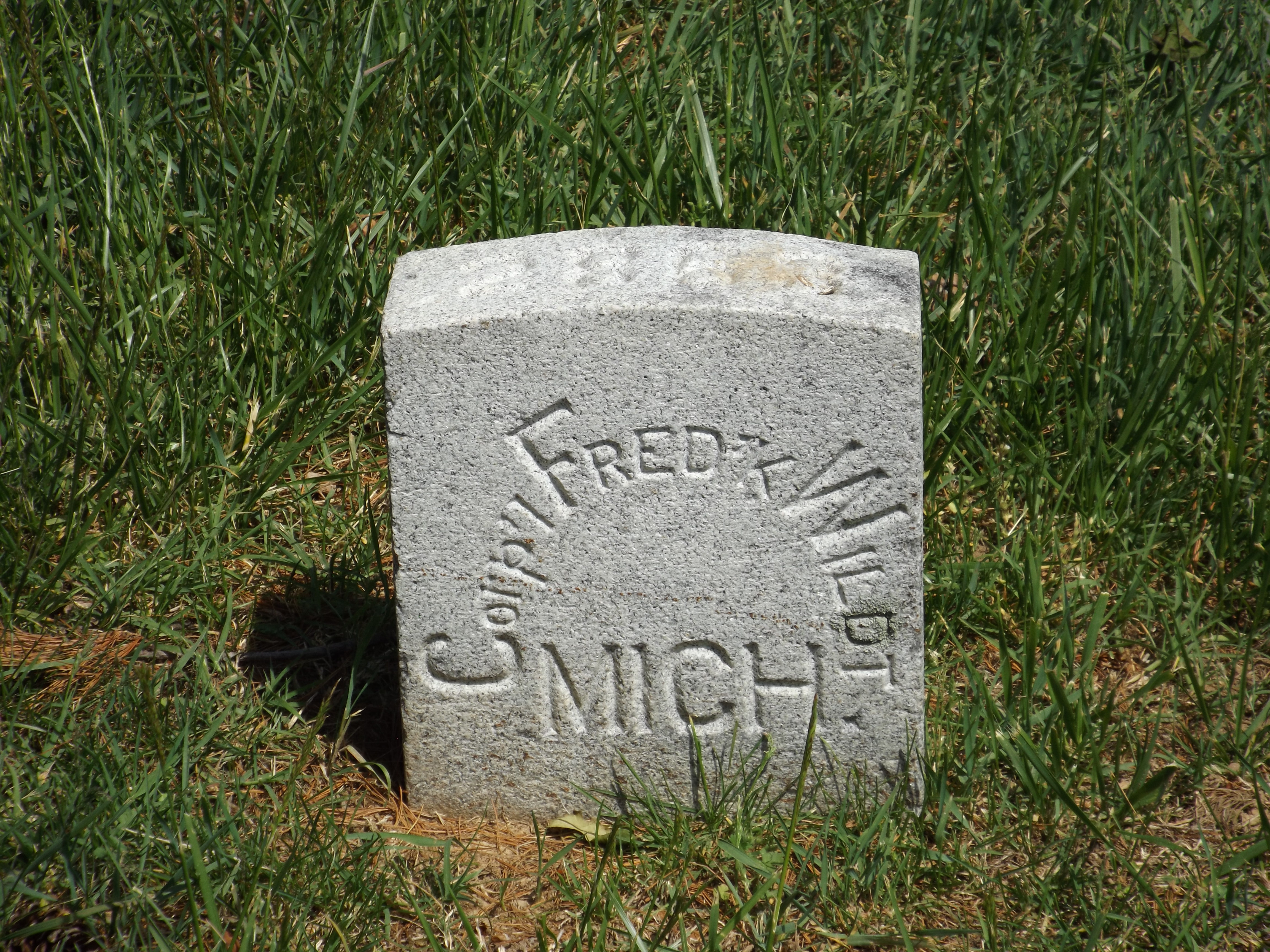 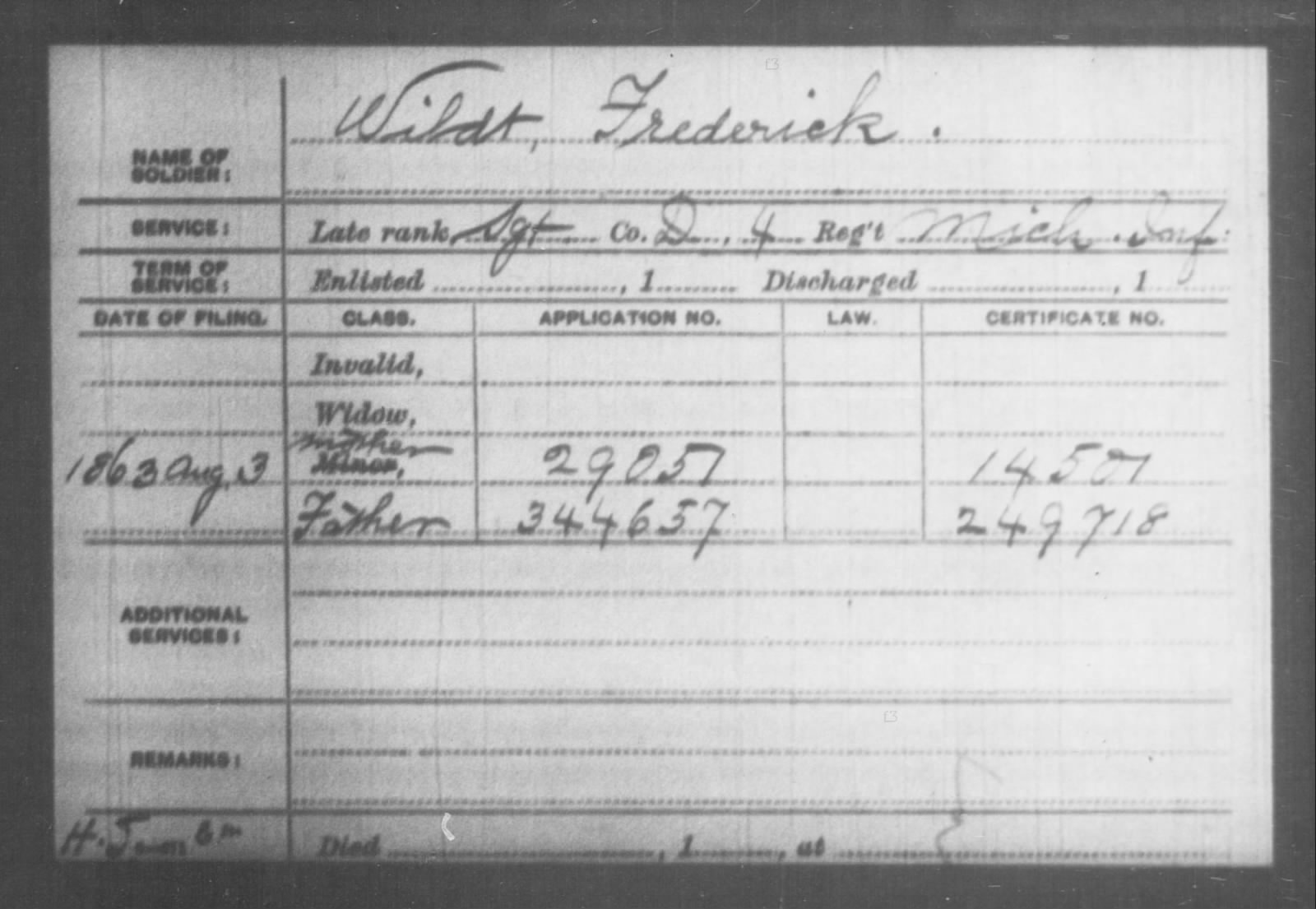 Two casualties of the Battle of Fredericksburg lie side by side, both from the same unit. James Clark and Frederick Wildt were both members of Company D, 4th Michigan. Both had enlisted in 1861 at the age of 19 to serve for three years. Frederick was first corporal of Company D and James was promoted to first lieutenant in the regiment just prior to the Battle of Fredericksburg. Both would be among the over one thousand Union soldiers killed during the battle. While attacking Marye’s Heights, James rode up to his old company and encouraged them in their advance leading one of his comrades to admonish him to keep down or he would be hit. Those words were hardly spoken when a bullet hit James on the third button of his overcoat, glanced to the left, and killed him.

Frederick was also killed instantly during that attack, shot in nearly the same place as James. Both were taken off the field by their comrades and buried in a lot in Fredericksburg.  They were buried side-by-side in separate coffins marked by a carved head board in a service attended by the captain, the company, and the regiment’s chaplain.

Today they still lie side-by-side, reinterred here in the National Cemetery, comrades in death as well as life.

“The Fourth Regiment In the Fredericksburg Fight,” Adrian Watchtower, January 5, 63:

“But what shall I say of our lamented Adjutant, James Clark. But lately promoted to a Lieutenancy in the regiment, and but a day or two before the battle promoted to a 1st Lieutenant and Adjutant of the Regiment in full, and this being the first engagement he had been in as a commissioned officer, he was every where present, and by his cheerful voice encouraging his comrades on. He was the personification of heroic daring and cool bravery. After the action became general he came up, on the right, to company D of which he used to be a member, and smiling to his comrades and associates, says, “boys keep your front ranks filled,” Sergeant Chester Comstock was between him and me. One of the boys told him to keep down, or he would be hit. The words were hardly out of his mouth when a musket ball struck poor Jimmy on the third button of his overcoat, glanced to the left and went directly through him. He fell over toward where I was lying, and with a smile upon his countenance, he yielded up his young life without a struggle or a groan. I detailed four men from company D, to carry him to the rear, and put a guard over him, to protect his body from the robbers that follow in the wake of the army, for no other purpose than to pillage the dead. Brave boy, although dead to us, your memory will live in our breasts. Kind and affectionate, to all; and by his gentlemanly ways he had won the respect and admiration of the whole regiment. I wish I had the pen to write his eulogy; but it is written in the hears of all who knew him.”

“And what shall I say of Fred. Wildt? He, too, was instantly killed- - shot nearly in the same place that poor Jimmy was. He was First Corporal in company D, and one of the best and neatest soldiers in the regiment, ever ready to do his duty, which was always done cheerfully and willingly; and one who kept the neatest and cleanest equipments in the company. Brave boy! He, too, has yielded up his young life upon his country’s altar. He, too, was carried to the rear; and to-day Fred. Wildt and James Clark lie side by side in Fredericksburg. Captain J.W. Hall, with the company and Chaplain of the regiment, Rev. Mr. Seage, buried them on a pretty little knoll, in separate coffins, making their graves with a carved head board, in order to find them again if necessary.”

Many of the casualties from the Battle of Fredericksburg lie under “unknown” markers. After the battle, Robert E. Lee sent a message to Ambrose Burnside to send burial parties across the river to bury the Union dead. By the time, these parties began the process many of the bodies had been stripped of clothing and lain on the field for a period of time. Hastily, and under a flag of truce, Union troops buried their fallen comrades in mass graves, erasing the identities of the dead. When the bodies were reinterred in the National Cemetery, the identities of only a few could be determined. For James Clark and Fred Wildt the care taken by their comrades to bury them preserved their identities.