Winston-Salem's Reynolds Building was completed in 1929 and was the centerpiece of the downtown area. Constructed at a cost of $2.5 million-dollars just, the 22-story building served as the headquarters for R.J. Reynolds Tobacco Company and was also home to dozens of other companies. The building was constructed by the same architects who would later build the Empire State Building, and some aspects of that famous New York landmark can be seen in this smaller North Carolina building. Reynolds Tobacco utilized the building until 2009 when the company restructured some business operations in the wake of declining demand and higher regulation. Following a significant remodel, the building now serves as the Kimpton Cardinal Hotel and The Kathrine Restaurant. The building also houses apartments in the higher levels known as The Residences at The R.J. Reynolds Building.

The building in its early days, before the Winston Tower was constructed. 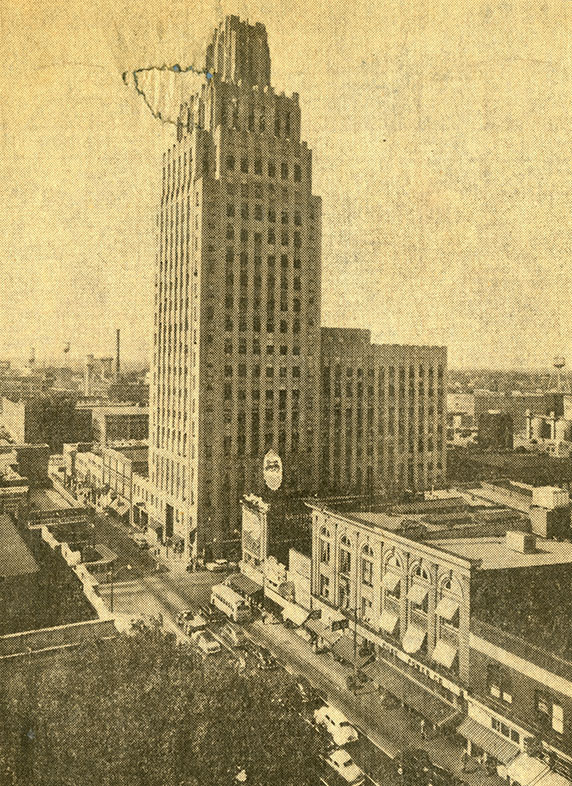 The Reynolds Building, now known as the Kimpton Cardinal Hotel 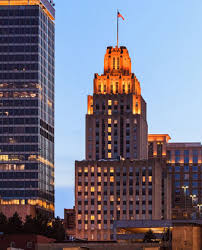 The Reynolds Building being constructed 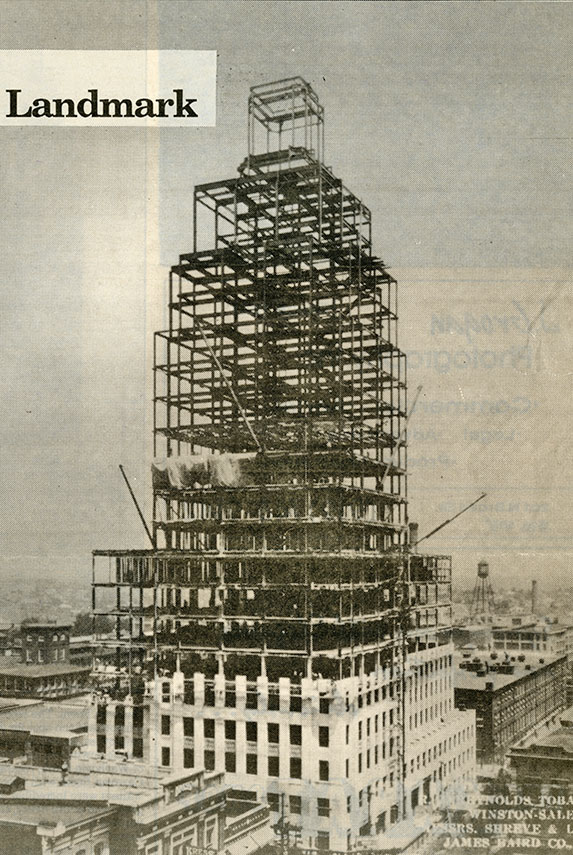 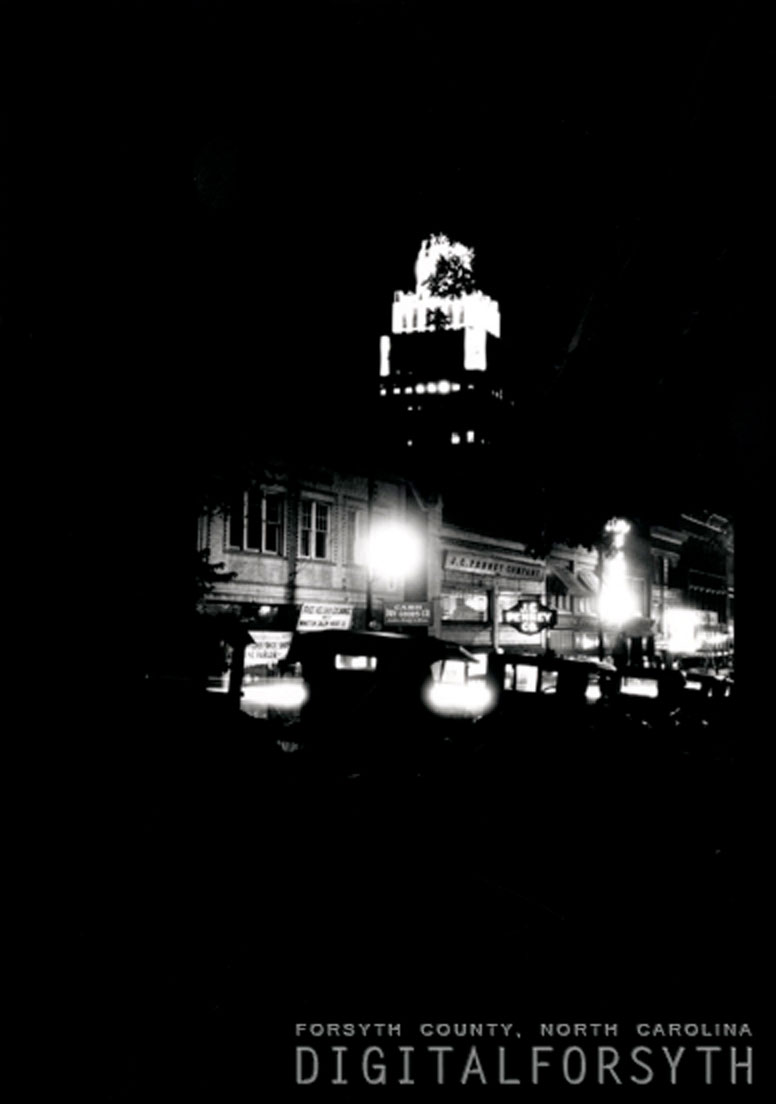 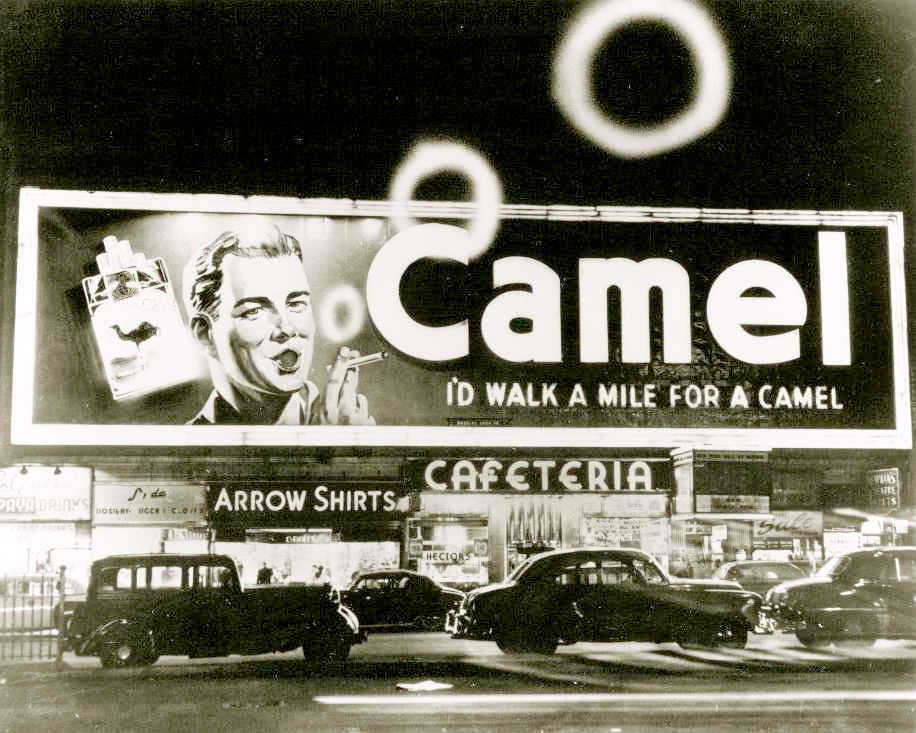 Christmas at the Reynolds Building, 1938 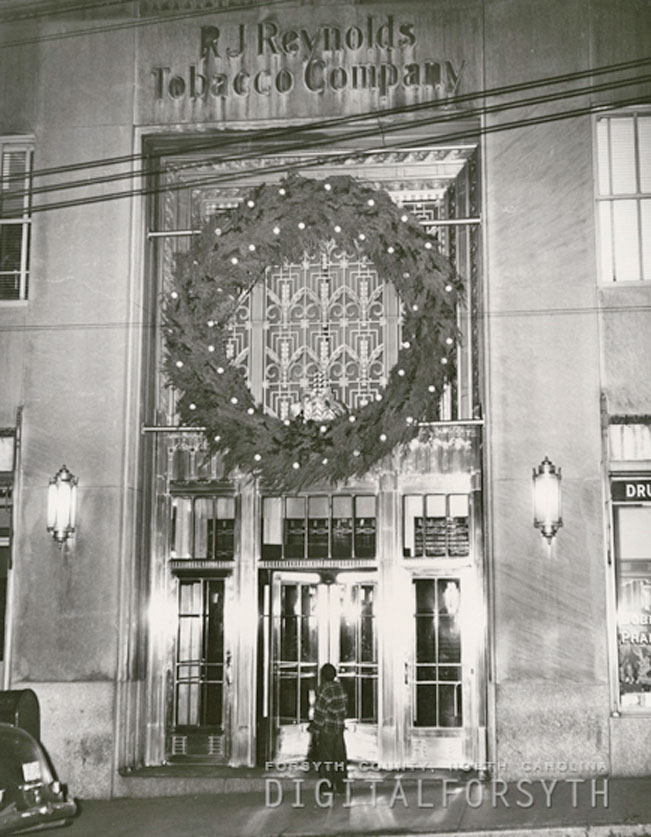 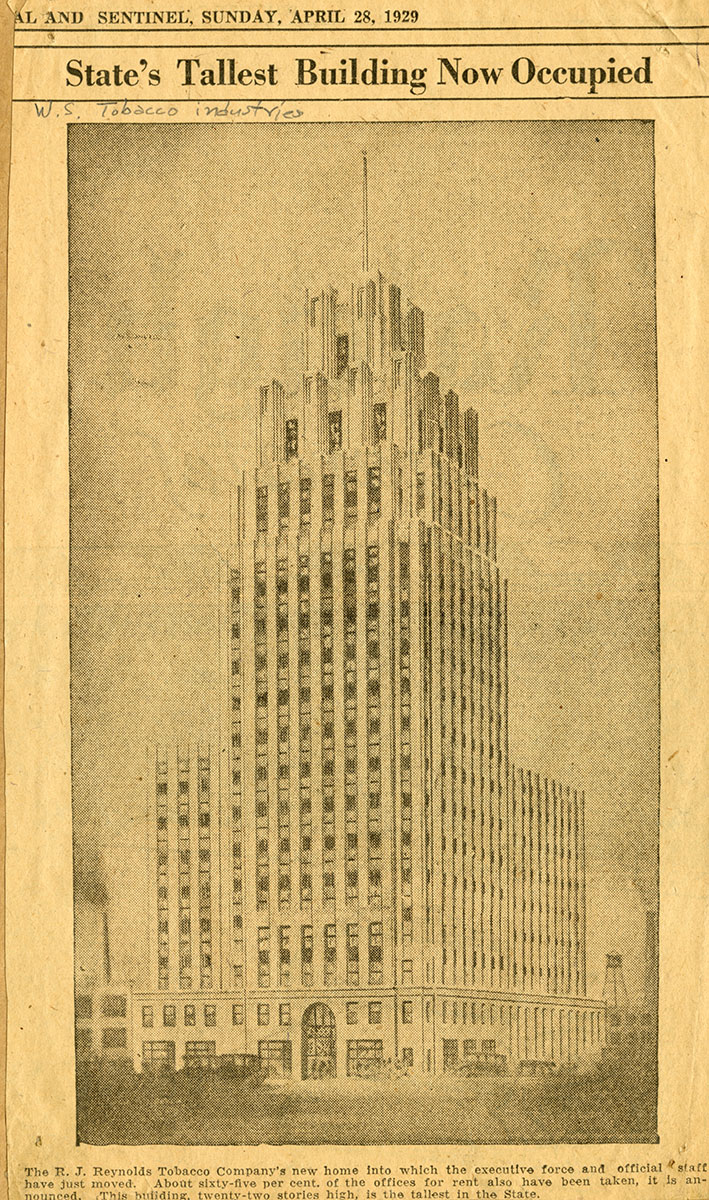 View of the Reynolds Building from Salem's God's Acre 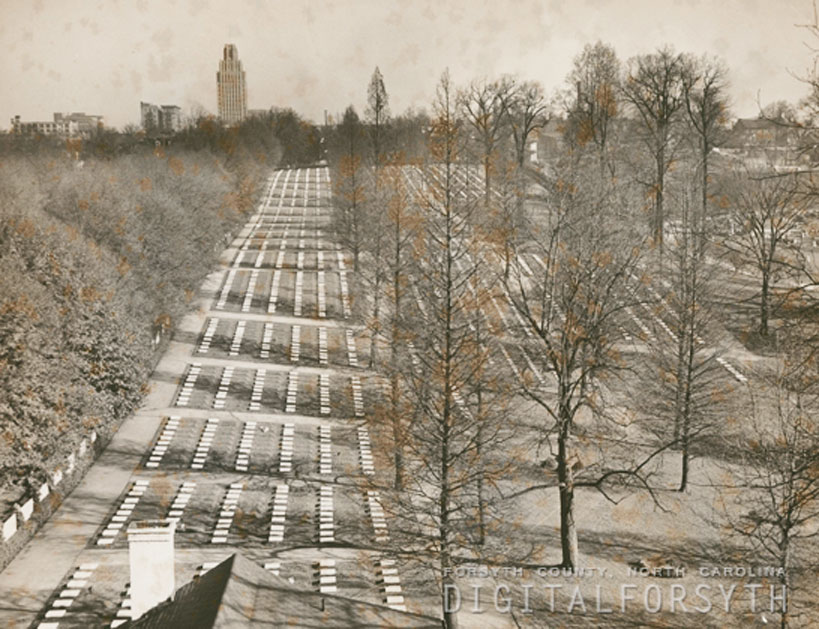 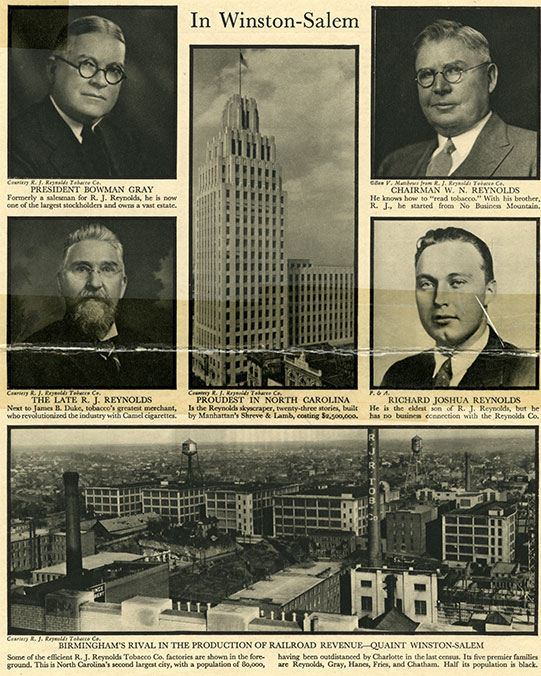 In 1874, Richard Joshua Reynolds moved from Virginia to Winston-Salem, North Carolina, where he built the two-story “Little Red Factory” beside a new railroad line. Beginning in 1875, Reynolds Industries was a seasonal operation in which tobacco was bought during the fall and operations ran until processing and sales were completed employees were dismissed until the following season. At the time, the only permanent employee was a part-time bookkeeper. Reynolds used profits to expand the original factory as business expanded, and by 1890, R.J. Reynolds Tobacco Company was a year-round business operating out of a factory to the south of the original building. A second factory was built in 1899, and the office was moved there. In 1907, the introduction of Prince Albert pipe tobacco brought production from 250,000 pounds annually to a staggering 14 million pounds of tobacco just four years later.

By 1910, a separate building was required for corporate offices which opened the following year. In 1913, the company released their first cigarette owing to changing consumer acceptance of this cheaper product that had once been viewed as effeminate. For the first 38 years of production, the company had only sold chewing and pipe tobacco. After the introduction of Camel cigarettes, however, this soon became a leading part of the business and the company sold 425 million Camel cigarettes in their first year. In four years, it was the top-selling brand in the world.

Before R.J. Reynolds died in 1918, he had chosen Bowman Gray as his successor. Company executives deemed Gray too young for leadership and Reynolds’s brother William Neal “Mr. Will” Reynolds took over. In the mid-1920s, the company needed exponentially more space, and hired R.H. Shreve and William F. Lamb of the architectural firm Shreve & Lamb, from New York, to design a new building. Shreve and Lamb later used the Reynolds Building as inspiration for their construction of New York’s Empire State Building, which was completed in 1931. To this day, the Empire State Building sends a Father’s Day card to the Reynolds Building each year.

Drawings for the new buildings began in 1927, and construction started on March 1, 1928. Upon its opening on April 27, 1929, when officers workers were officially moved in, the National Association of Architects named it the “best new building of the year.” The Reynolds Building is 315 feet high with a 65-foot flagpole, standing at a total of 380 feet and 22 stories, although a 13th floor never existed and still does not exist, due to superstitions associated with the number. The Reynolds company, however, only occupied several of the floors, with a majority of them being rented out to tenants who wanted their businesses to reside in the most prestigious building in the city. Just some of the residents included newspaper stands, banks that bragged about their location in newspaper ads, Army and Navy recruiters, dentists, doctors, lawyers, the private offices of Mayor George W. Coan, Norfolk Southern Pennsylvania and New York Central Railways, and the Carolina Detective Agency, among many others. It also included the Reynolds Grill, later called Caravan Restaurant, and the Reynolds Barber Shop.

Not only was the Reynolds Building the tallest in the southeast, the cost to build it is almost incalculable in today’s money. A unique metal called Benedict was created specifically for the building, and the inside consists of gray-brown marble from Missouri, buff-colored marble from Hauteville, France in the lobby, black Belgian marble framing in the elevator lobbies, aluminum and gold leaf in the wall and ceiling décor, and an Indiana limestone exterior. Around 1,000 windows composed 40 percent of the exterior. (5) In the 1920s, the cost was around $2.5 million.

In 1941, the R.J. Reynolds Tobacco Company introduced one of the most famous billboards in history, the Camel cigarette smoking billboard in Times Square. In 1948, Camel sponsored one of the first national news programs, the Camel News Caravan with John Cameron Swayze. Then, in 1956, the company began investing in non-tobacco related enterprises, such as Hawaiian Punch fruit drink, and created RJR Foods. In 1970, it began acquiring oil and gas companies as well, and became R.J. Reynolds Industries, Inc. In addition, the company released the character “Joe Cool Camel” in 1985. Although they claimed it did not target young smokers, Camel’s market of under-18 smokers rose from just 0.5 percent to 32.8 percent in the following two years and they were harshly criticized, yet the figure was not removed until 1997. After several more sales, mergers, and moving of headquarters several times before it finally being moved back to Winston-Salem, a merger in 2002 created Reynolds American, Inc.

In 2009, the FDA began enforcing a tobacco control law requiring companies to receive approval before marketing new products, as they had to be “substantially equivalent” to those already on the market as not to cause new health concerns. (9) During this time, Reynolds reduced their workforce and moved to a smaller space in the Plaza Building next door. In 2015, the FDA ordered the company to remove four new products, as they did not meet the requirements that had been set in place: Camel Crush Bold, Pall Mall Deep Set Recessed Filter and their menthol version, and Vantage Tech 13.

In 2014, the Reynolds Building was added to the National Register of Historic Places. In 2015, it began its transformation into the Kimpton Cardinal Hotel. The hotel features the ornate lobby and offers 175 rooms as well as a gym and a bowling alley. The Reynold Building also houses a restaurant and bar that offers a glimpse of the past when they walk into the main entrance with brass elevator doors or the gold and silver leaf ceiling.