Dedicated in 2014, this statue honors Jane "Jeanie" Renwick Smedberg Wilkes who helped establish Charlotte's first hospital. Wilkes (1827-1913) was instrumental in securing health care for members of Charlotte's growing post-Civil War community and was also involved in founding Charlotte's first orphanage, Thompson's Children's Home. Largely forgotten until the work of historians demonstrated her contributions to Charlotte's social, economic, and civic life throughout her lifetime, Wilkes is now honored by this statue adjacent to Charlotte's Levine Cancer Institute on East Morehead Street that is part of the city's Trail of History. 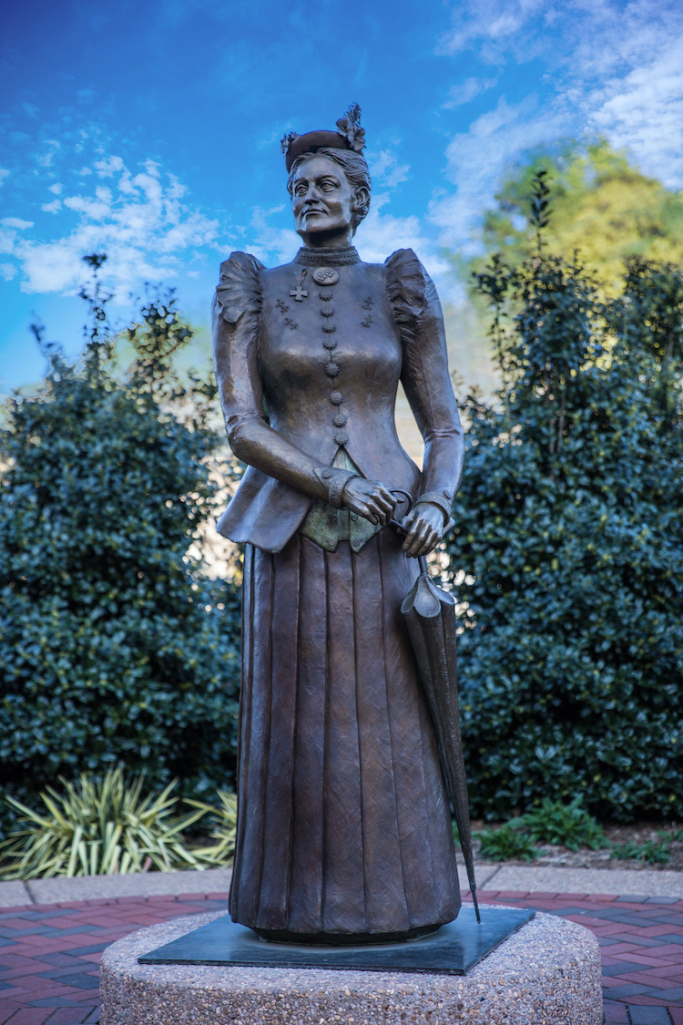 A photo of the real Jane. 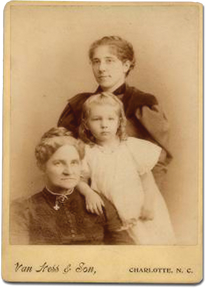 Born on November 22nd, 1827, Jane Renwick Smedberg Wilkes was a prominent member of Charlotte society and thanks to the work of local historians, her role in the city's history has been commemorated by this statue. Born and raised in New York City, Jane moved to Charlotte shortly after her marriage in 1854 and lived in the Queen City for most of her life. Her work started during the Civil War when she volunteered to work in Confederate camp hospitals throughout the Charlotte area. The experience she gained in her work with Confederate soldiers at these camp hospitals would eventually led her to be the key force behind the construction of Charlotte’s first two civilian hospitals.

Jane’s role as president and secretary of the Church Aid Society of St. Peter’s Episcopal Church allowed her to raise support and funds for her mission. As a result, the Charlotte Home and Hospital of St. Peter’s Episcopal Church, the first civilian hospital in the state of North Carolina, began serving the white community of Charlotte in 1876. Initially, this hospital functioned out of two rented rooms in a house on East Seventh Street; it was later moved to a new, larger building at the intersection of Sixth and Popular Streets. Whereas the first hospital she opened had only served the white community of Charlotte, the second hospital Jane opened, called the Good Samaritan Hospital, was the first hospital designated for the care of Black citizens in North Carolina and one of the first of its type to exist in the United States. This second hospital was opened in 1882. At first, the Good Samaritan Hospital was comprised of a four-room house; it later moved to a new, larger building on West Hill Street in 1888. These two hospitals were the predecessors of the Carolinas Medical Center which is now headquartered in Charlotte.

Wilkes served on the boards of both St. Peter’s Hospital and Good Samaritan Hospital, continuing to serve as the secretary-treasurer of St. Peter’s for 29 years. She was also involved in the founding of Charlotte’s first orphanage, the Thompson’s Children’s Home. Like many Southern white women, she was dedicated to vindicating the white antebellum South and the "Lost Cause" of the Confederacy as a member of the United Daughters of the Confederacy. She was also active in the Women’s Auxiliary to the Board of Missions of the Episcopal Church, and the Episcopal Churchwomen.

A wife and mother, Wilkes endured the pain of mourning the death of her husband and all nine of her children during her long life. Wilkes died at her home on West Trade Street on January 20th, 1913. Her funeral was held at St. Peter’s Episcopal Church in Charlotte and was attended by many people of different classes and races. A small stained-glass window which memorializes Jane still stands in Charlotte's St. Peter's Church today.

Now, a statue commemorating Jane Wilkes's legacy stands across from Charlotte's Levine Cancer Institute on East Morehead Street. The statue is 7.5 feet in height and weighs 800 pounds, and was installed in 2014. Jane's sculpture is part of the city's Trail of History, a series of twenty statues of significant contributors to Charlotte's history. The Trail stretches along the Little Sugar Creek Greenway between Seventh Street and East Morehead Street.