Thomas Willington Lawton was the county's first elected superintendent and lived here. After Lawton owned it the school district then bought the property. 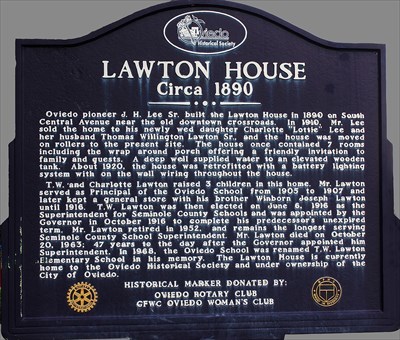 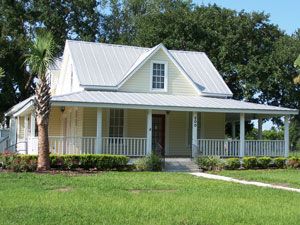 The T.W. Lawton House is in the heart of Downtown Oviedo, FL. This was the former home of TW Lawton who lived in Oviedo in the 1890’s. The Lawton House was built in 1890 and was constructed on the site of the Oviedo police station. In 1910, the house was then moved to its current location of 200 W Broadway St, Oviedo, Fl 32765. The Lawton House is currently owned by the city of Oviedo.

The Lawton house is located next to Friendship Park and right in front of Lawton Elementary School. Thomas Willington Lawton was the first one to live in the house and was the county’s first elected school superintendent. Thomas was born in 1882 in Oviedo and lived in the town until his death in 1963. He was educated at Rollins Academy and graduated from the college in 1903. During his time in college he was able to achieve his master of arts degree from Boston College and then returned to Oviedo. From that point on he was the schools principal for several years before being elected for superintendent in 1917. After serving 35 years in the county, he decided to retire in 1952. Once he passed the old Oviedo school was renamed in his honor. (LAWTON HOUSE TO BE RESTORED CITY OF OVIEDO, CHAMBER, SCHOOL BOARD UNITE TO PRESERVE HISTORIC BUILDING, Michael Cote)

J.H. Lee Sr. built the Lawton House in 1890 at the center of historic downtown Oviedo and then in 1910 sold the house to his newly wed daughter Charlotte and her husband Thomas Willington Lawton Sr. The house was then moved on rollers to the present site. The house has seven bedrooms and includes a wrap around porch. In 1920 the house was retrofitted with a battery lightning system with on the wall wiring throughout the entire house. During their time spent in the house the couple had raised three children. After Thomas Willington Lawton was done serving as the principal of the school from 1905-1907 he then maintained a general store with his brother until 1916. On June 6th 1916, he was elected as the superintendent for Seminole County Schools and was appointed by the governor in October 1916 to complete his predecessor’s unexpired term. Lawton is still to this day the longest serving seminole county school superintendent.

On March 13, 1879 the name Lake Jessup  Community faded into history as Andrew Aulin chose the name Oviedo. Andrew Aulin was an early settler and shop- owner and had decided to settle paperwork for a post office. Andrew Aulin based the name of the town off of his last name being Spanish. Which gives us the name Oviedo. Back then Oviedo was pronounced O-vee-a-dough. Andrew Aulin chose this name because he liked that the name had Spanish background which involves their heritage of the state of Florida. Oviedo vaguely resembles what it used to be like back in the day with citrus and celery which are no longer produced here in large quantities. The town of Oviedo is known for the random chickens that walk around the town and are spotted at local businesses. Since the start of University of Central Florida, the town's population has grown tremendously.

On the first Saturday of every month, the Lawton House holds a farmers market for locally grown and made items to be sold. People from all over the town and other surrounding towns come to take part in this event. The Oviedo Farmers Market was created by the Oviedo Historical Society Board members in an effort to bring the society together, showcase the Lawton House, all while supporting it. Community service hours are offered to students who help volunteer and make the farmers market a success. The students can be junior docents by giving tours around the Lawtown House and can work with the vendors.

Great Day in the Country used to be held at the Lawton House every year. The Oviedo Woman's Club is in charge of the function every year. There are many vendors that reserve their booths in advance every year due to high demand. Admission is free and there are all kinds of different foods and snacks for people to try and buy. There are crafts you can buy and make yourself or you can purchase the vendors own artwork. There are crafts ranging from rustic, fine art, jewelry, toys, fine furniture, painted gourds, oil paintings, and anything else you can think of. They have relocated this event to Oviedo in the Park.