In a society suffused with pain, illness, and death—like that of the nineteenth-century United States—people were desperate for medicines that could alleviate suffering, if not offer a cure. The patent medicine industry, which came into its own in the second half of the century, promised relief from every ailment imaginable. While Lowell is best known for its place in the textile industry, it was also a locus of patent medicine companies, like J.C. Ayer & Co.—one of the most successful. Ayer’s business success lay not in the efficaciousness of his medicines, which in most cases were not even effective as palliatives, but more so in his advertising. His company distributed tens of millions of almanacs promoting its medications in more than twenty languages, not to mention colorful trading cards, newspaper advertisements, and shorter pamphlets promoting its wares. 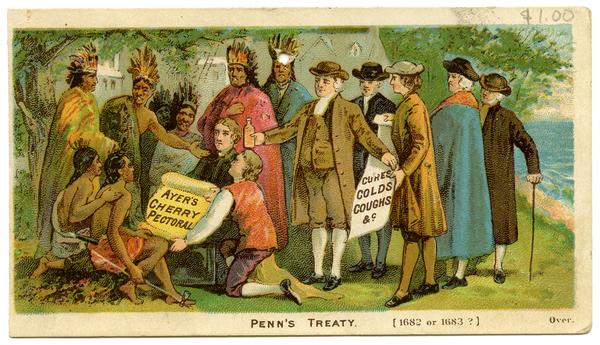 Ayer's pill bottle, recovered from the 1865 shipwreck of the USS Republic. 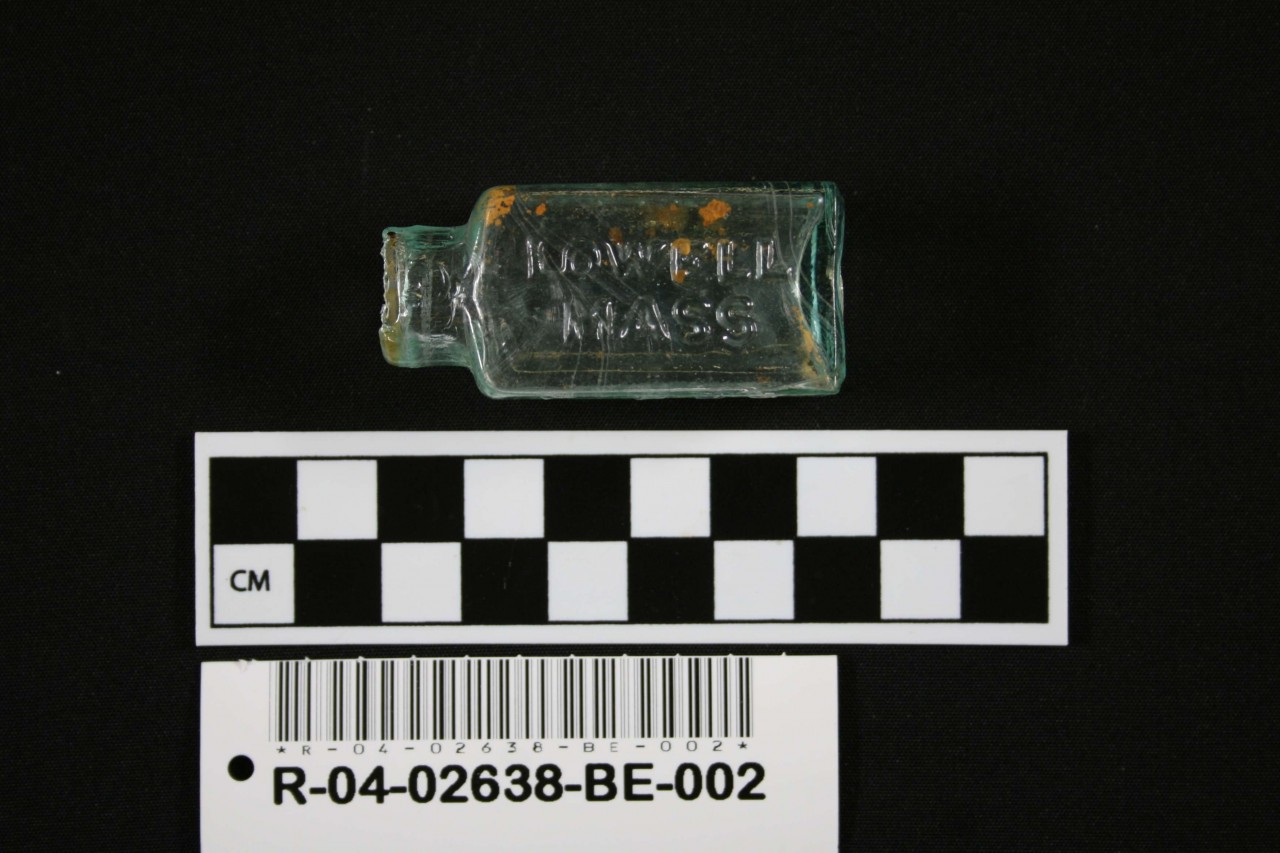 Title page of the 1860 Ayer's Almanac. The angel's banner reads "For the healing of all nations." 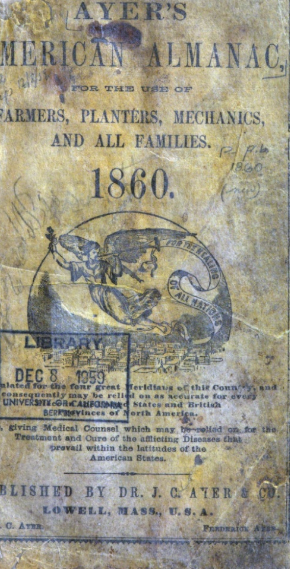 In 1860, the most widely-distributed almanac in the United States opened with a terrifying warning about Scrofula, “a foul corruption which dwells and genders in the blood, and rots out as it were the machinery of life.” [1] Scrofula, the almanac advised, was responsible for almost every ailment thinkable. Take, for instance, the disease’s possible effects on the teeth alone: these might be “very white, inclined to be foul, or covered with a glairy secretion, [or] liable to split and decay early.” [2] Luckily for the “large proportion of all our people [that were] tainted with it,” the almanac had a cure. Ayer’s Compound Extract of Sarsparilla, depicted by a drawing of an angel descending from heaven to save a sick man, was “the best remedy ever yet discovered for this complaint.” [3]

Ayer’s American Almanac, which at its peak distributed more than 25 million annual copies in 21 languages, was part of the robust advertising arm of Dr. J.C. Ayer & Co., one of the most successful patent medicine manufacturers in nineteenth century America. (Patent medicines were proprietary “remedies” available without prescriptions.) The company’s laboratory, which employed 150 workers and went through “325,000 pounds of drugs, 220,000 gallons of alcoholic spirits, and 400,000 pounds of sugar” in 1871 alone, was located in the heart of Lowell. [4] Here, the company produced concoctions like Ayer’s Cherry Pectoral (for pulmonary afflictions), Hair Vigor (for gray hair), and Ayer’s Ague Cure (for ague and other fevers). Many of these products did not, in fact, work. They were part of a venerable U.S. tradition of quack medicine, which flourished in the nineteenth century before stricter regulations were passed in the early 1900s. Other remedies relied on drugs now considered dangerous (opium was the active ingredient in Ayer’s Cherry Pectoral) but which were commonplace at the time. And some, like Ague Cure, contained ingredients that would later be shown to have effective medicinal properties—cinchona bark, an ingredient in the Cure, contains quinine, which does indeed fight malaria. [5]

Ayer set up shop in this building in Lowell in 1859; the company continued to operate here until 1917, long after Ayer’s death in 1878. As important to its success as the production of medicines was the way they were advertised; the Almanac was just one facet of a much larger advertising apparatus. Trade cards (colorful cards handed out for free and often saved in scrapbooks) and newspaper advertisements were other ways to tout the supposed benefits of Ayer’s Pills. Facilitated by the development of new print technologies that allowed for the cheap reproduction of color lithographs, patent medicine manufacturers like Ayer could afford to spend hundreds of thousands of dollars on advertising to draw customers to their particular brand.

These advertisements, as Becky Filner of the New York Academy of Medicine notes, “were designed to appeal to women and children” and often pictured cherubic toddlers, elegant women, and couples in love. Others traded on racist stereotypes of African Americans and Native Americans; as historian James Young observes, “Millions of Americans may well have had their social attitudes influenced, or their prejudices confirmed, by such a steady diet of unflattering caricatures.” [6] For Ayer, the patent medicine business was an incredibly lucrative one. Estimates place his fortune in the realm of $20 million. He became involved in Lowell’s other major industry, textile manufacturing, with his son Frederick Ayer. He also attempted to get involved in politics, securing the Republican nomination for Massachusetts’s seventh district but losing in the general election—the New York Times commented that this was on account of “his cold manners.” [7] Not long after, Ayer was committed to a New Jersey asylum where his poor health continued until his death two years later.

Federal regulation of pharmaceuticals increased substantially not long after Ayer’s death. The Pure Food and Drug Act of 1906 is perhaps the best-known example of such early regulation, though, thanks to a Supreme Court case in 1911, its scope was severely limited: it covered only accurate labeling of ingredients, rather than the efficacy of the drug. Later on, the Food and Drug Administration mandated that only doctors could prescribe medicines, and most drug companies began advertising to physicians, eventually sparking concerns about patient autonomy (indeed, as Julie Donohue notes, “it was a common and accepted practice for physicians to withhold basic information from patients about their diagnosis and treatment” during this period). [8] Deregulation and the rise of direct-to-consumer advertising, however, brought another set of challenges and controversies. Advertisements often played into discriminatory tropes. Physicians now felt that their authority was undermined. Perceptions of drugs as consumer products led to increased use in new populations, such as children, and attendant concerns about over-medication. One constant? The highly lucrative nature of the pharmaceutical industry.

UC Berkeley Library, digitized by Google and made available on HathiTrust.