Lucy Delaney was born a slave in St. Louis, Missouri around 1830. Lucy's mother Polly, who had lived free in Illinois for part of her life before being captured and sold into slavery, eventually sued for and won her freedom, but Lucy remained a slave. Polly sued for Lucy's freedom, her argument being that Polly had been living free in Illinois before her capture so her children deserved to be free. After 17 months of awaiting trial, Lucy's attorney, Edward Bates, successfully secured her freedom in 1844. Lucy became a seamstress and, by 1890, lived at 1241 Gay Street with her husband Zachariah Delaney. While she lived here, she published her autobiography, From the Darkness Cometh the Light. 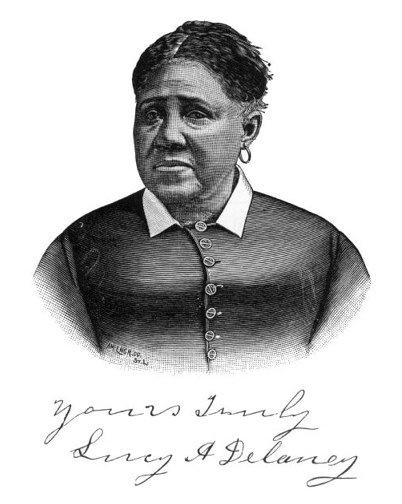 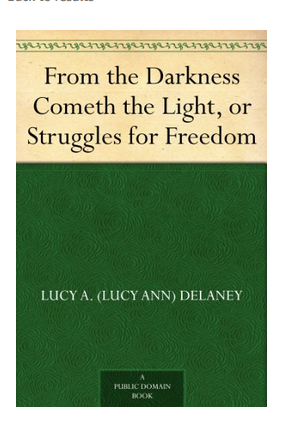 Lucy Delaney was born Lucy Ann Berry in St. Louis, Missouri around 1830. Her mother, Polly, had been living free in Illinois when she was captured at the age of 5 and sold into slavery across the river in Missouri. Polly lived in slavery for many years, eventually married, and had two children, Lucy and Nancy. Polly and her family were promised her freedom by their owner, Major Taylor Berry, but upon his death, Polly, Nancy, and Lucy remained enslaved by their former master's daughter while Polly's husband was sold South.

Nancy eventually escaped to Canada while accompanying her former master's daughter and son-in-law on their honeymoon. Shortly after, Polly sued for her freedom, but Lucy remained a slave. After an altercation with her owner, Mrs. Mitchell, the daughter of Major Berry, Lucy ran away to her mother who began the suit for her daughter's freedom.

Lucy was represented by Judge Edward Bates, a politician who would later be President Abraham Lincoln's Attorney General. For 17 months, Lucy was held at the local jail located at Sixth Street, between Market and Chestnut, at the request of her owner who feared her to be a flight risk. Eventually, her case was heard at the Old Courthouse in downtown St. Louis where, after several long sessions, Lucy was given her freedom. In her memoir, Lucy recalls the first surge of happiness at receiving her freedom: "I could have kissed the feet of my deliverers, but I was too full to express my thanks, but with a voice trembling with tears I tried to thank Judge Bates for all his kindness (pg 49).

She married Frederick Turner a few years after the suit and moved to Quincy, Illinois. Unfortunately, he passed away when the riverboat ironically named Edward Bates exploded. For a few years, she worked with her mother and made a living as a seamstress. Eventually, she married Zachariah Delaney and moved back to Missouri. They had 4 children together, each of whom died before their parents.

In 1892, Lucy and Zachariah lived with their children in St. Louis at 1241 Gay Street, located in what was known as Mill Creek Valley. It was here that Lucy wrote her now famous memoir, From the Darkness Cometh the Light, which details her struggles as a young slave and as a slave suing for her freedom in slave-holding Missouri. According to the National Park Service, "It is the only direct account we have of what it felt like to be a slave suing for your freedom in the St. Louis courts."

Lucy's date of death is unknown, but federal census records indicate that by 1900, Lucy and Zachariah had already moved from the residence on Gay Street. The house on Gay Street was torn down during urban renewal projects that wiped out the majority of structures in Mill Creek Valley. Today, a parking lot sits on the plot of land that Lucy once lived on. No plaque or marker indicates that the land was once home to a former slave who, against all odds, sued for her freedom and won.

From the Darkness Cometh the Light

From the Darkness Cometh the Light