Built during the 1950s, the Greenmeadow Subdivision embody the 1950s culture comprised of suburban living, the nuclear family, and indoor-outdoor living. However, the homes differ from most tract housing developments that dominated suburban construction. Joseph Eichler, who built more than 11,000 homes in Northern California during the 1950s, '60s, and '70s, bucked the "cookie cutter" trend by employing architects and relying on modern designs. 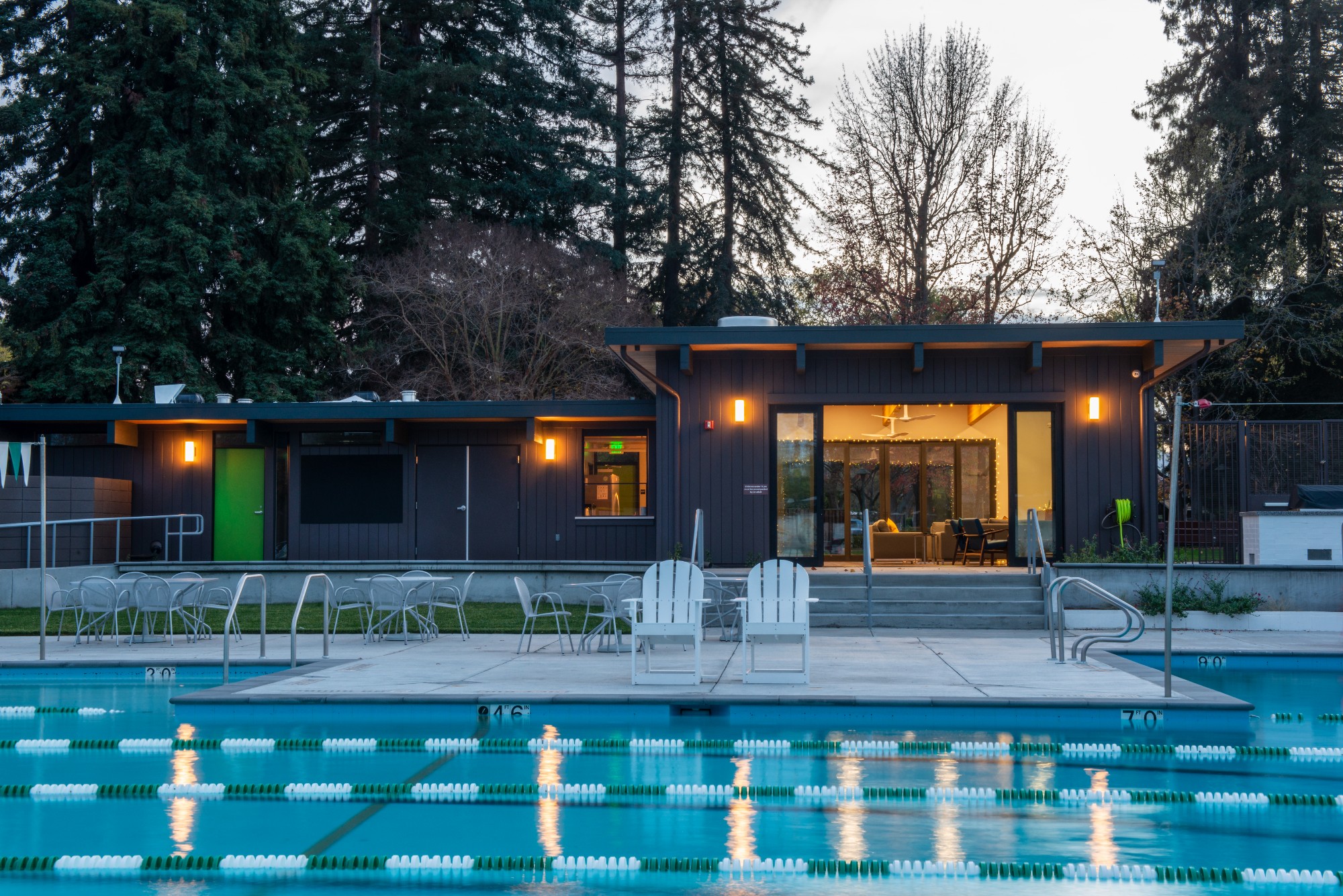 Example of the outdoor spaces common in Greenmeadow homes

The Palo Alto Greenmeadow development (1954-55), comprised of 243 single-family homes and one community pool, arose at a time when the nation experienced an explosion of suburban communities and subsequent mass-produced (pre-fab) residential construction. Joseph Eichler (Eichler Homes, Inc), who built more than 11,000 homes in Northern California between 1950 and 1974, designed the community as part of his efforts to buck the “cookie-cutter” approach to suburban construction.As well, the culture of the 1950s, centered on the nuclear family, inspired many of the design features, as did the California climate.

Ten million veterans returned home at the close of World War II in 1945, and they quickly began building families (which led to the “baby boom”). As a result, a substantial housing boom ensued notably in California where the population grew at a greater rate than any other state in the nation. Veterans who had shipped out of California often chose to stay and numerous others from around the country migrated to the “Sunshine State.”

The federal government provided the building boom with considerable momentum From 1945 to 1955, the government passed numerous bills that both made it easy for returning GIs to afford housing, but also provided incentives to builders. Builders doubled production from the 1940s to 1950s with mass-produced, tract housing leading the industry; tract housing accounted for more than 60% of the total housing market by 1959 compared to 24% in 1949 and 5% in the late ‘30s.

Most of the mass-produced, suburban homes lacked quality. Eichler's company sought to become an exception to that trend, demonstrated by the Greenmeadow neighborhood. Eichler and his company avoided contracting “middle men,” but instead oversaw each part of the building process including land acquisition, development, construction, financing, and marketing. Furthermore, his company chose to rely on architects to design houses that allowed for unique, individual designs and aesthetics.

His efforts went against the wishes of federally-supported programs and funding; building and planning authorities routinely withheld support for his designs. The Federal Housing Authority, imposed a number of restrictive design guidelines because they feared that anything out of the ordinary would unfairly sell better than most (tax incentivised) buildiers. Eichler with company co-founder James San Jule as his negotiating partner traveled to D.C. to lobby against the restrictions. Though he eventually gained an ability to design homes as he wished, he also had to appeal to a home-buying community that increasingly got used to the looks of standard tract housing. Nevertheless, Eichler embraced modern design and chose to market aggressively.

By 1954, when construction of Greenmeadow took place, Eichler’s company, based in Palo Alto, had built approximately 1,800 modern houses on the peninsula, and received acclaim from peers and popular sources alike for the company’s housing designs. As well, by the mid-1950s, with a booming economy (notably for whie Americans), desires by many moved not merely to new homes, but better-quality and larger homes. The Greenmeadow development met this demand as homes including a fourth bedroom.

The Greenmeadow homes also spoke to the 1950s culture reflected the prosperity enjoyed by the middle class, and focused on the nuclear family. Besides the fourth bedroom, the homes included double-car garages instead of carports; multipurpose rooms set apart from adult living spaces, kitchens with built-in appliances, modern laundry rooms, and second bathrooms for children with its own exterior entrance, which allowed children to enter without tracking dirt in the home. Meanwhile, the 'T-shaped' plan allowed for wives (moms) to function in the kitchen while in full view of outdoor spaces (keep an eye on the kids).

Lastly, the California climate also inspired Eichler to design homes that celebrated indoor-outdoor living. The T-shape also allowed for more patio space and full-height, sliding-glass doors allowed access to any of the outdoor spaces. Finally, in terms of the neighborhood layout, and the concept of "total community,” the Eichler company carved out space at the center of the subdivision for shared public amenities including a large pool.

Thus, to see the Greenmeadow subdivision is to peer into the window of America’s (and California’s) 1950s cultural history. The homes, despite differing from many of the standard tract housing that arose during the era, stand as reminders to the prosperity enjoyed by much of the middle class during that era, the focus on the “traditional” family, and the desire to enjoy the outdoor spaces -- patios, green lawns, grills and a community pool.