The Captain Jack Statue (The Spirit of Mecklenburg)

In May of 2010, the first statue of Charlotte’s Trail of History was unveiled. The Spirit of Mecklenburg Statue is a depiction of the hero Captain James Jack located at the corner of 4th Street and Kings Drive. Captain James Jack was a Revolutionary War hero who risked his life to deliver the draft of Mecklenburg Resolves (otherwise known as the Mecklenburg Declaration of Independence) to the Continental Congress in Philadelphia in 1775. This was a very risky and harrowing ride, as he would be hanged by the British if caught, and had to avoid the detection of the many British people and spying Tories that could potentially report him and his intention to deliver the Mecklenburg documents to British rule. Today, The Spirit of Mecklenburg Statue depicts Captain James Jack and his horse racing to Philadelphia and remains a reminder of all that Jack risked for the independence we celebrate today. 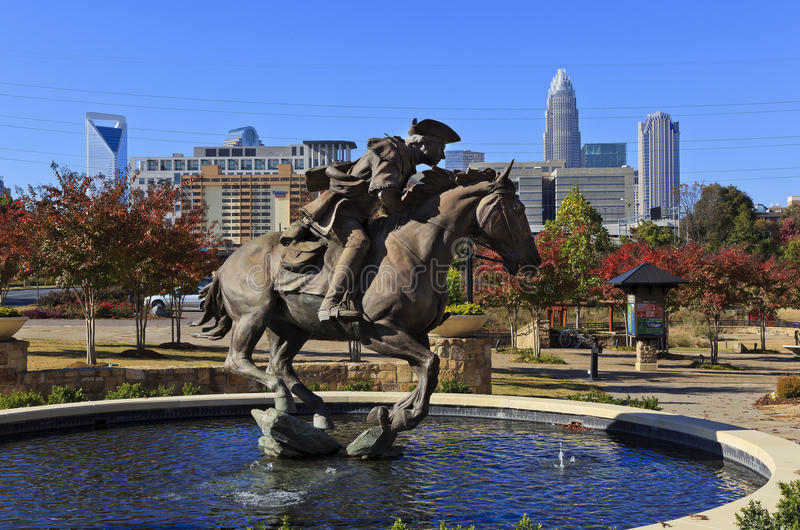 After receiving the news of the massacre of colonists by the British which took place at the Battle of Concord and Lexington on May 19th, 1775, Charlottetowne patriots were outraged. These citizens were already feeling overburdened by the oppressive laws of King George III, and the news of the massacre of the Battle of Concord and Lexington only further solidified their outrage. On May 20th, local patriots met and drafted the Mecklenburg Declaration of Independence. On May 31st, they met again to draft the Mecklenburg Resolves, a set of anti-British resolutions which denied the power of Parliament over the colonies. These documents declared that Charlottetowne and Mecklenburg County were no longer under British rule.

Captain James Jack, a young tavern owner, volunteered to take these documents to the Continental Congress in Philadelphia, Pennsylvania. This sort of journey was considered treason against the British king and would be punished with hanging. Essentially, Captain Jack was risking his livelihood, property, family, and life in his decision to transport the documents. Eventually, Jack made it to Philadelphia and demanded that Mecklenburg County’s declarations be read into record. Captain Jack’s journey from Charlottetowne to Philadelphia helped galvanize the revolutionary spirit in the Continental Congress and thus marks a significant milestone in Revolutionary War history.

Today, The Spirit of Mecklenburg Statue stands at the corner of 4th Street and Kings Drive. The Captain Jack Statue was sculpted by Chas Fagan, a self-taught artist who graduated from Yale University. Among other things, Fagan has painted portraits of Mrs. Barbara Bush and President Reagan and was selected as the governor for the creation of the bronze statue of Ronald Reagan which was unveiled in the United States Capitol Rotunda. After an international search, Chas Fagan was commissioned by the May 20th Society to produce the statue. In May of 2010, The Spirit of Mecklenburg Statue was finally unveiled, depicting a determined Captain Jack riding his horse on the way to present treasonous documents to the Continental Congress. The statue is situated overtop of a 70-foot-wide fountain which is surrounded by casual seating and serves as the centerpiece to the Little Sugar Creek Greenway. The statue now stands at a testament to Captain Jack’s bravery and pivotal role in the U.S.’s fierce fight for freedom from British rule.