A wreath in front of the Ohio Veterans Plaza 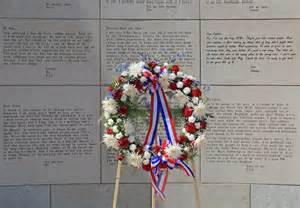 In 1981, two Vietnam veterans, Carl Chandler and Harry Edwards, hand painted a four-by-eight-foot sheet of plywood as a tribute to Vietnam Veterans on the grounds of the Ohio Statehouse. They were going to be charged with trespassing and destruction of state property until State Senator Richard Pfeiffer, who was also a Vietnam Veteran, sided with them. Pfeiffer worked to keep their tribute in place until the Ohio Congress passed legislation to create a permanent veteran's monument.

The Ohio Veterans Plaza, designed by John Schooley, is intended to serve as "a symbol that our government could not exist without the sacrifices Ohio veterans have made." 1 The monument is constructed of two curved limestone walls inscribed with letters from veterans that were sent home to friends and family members. The letters were chosen from over 1,500 that literary consultant John H. Mitchell, a Navy and Vietnam veteran from Greenfield, Ohio sorted through. The variety of letters reveal the trials and sacrifices made by veterans. There also are two fountains with benches for visitors who want to sit and reflect. The names of all eighty-eight Ohio counties are lined through the grass, and the American, Ohio and POW/MIA flags are on display.