Protest Against Segregation at Dizzyland Restaurant, 1963

African Americans faced discrimination and segregation throughout Cambridge, Maryland, even as protests led to the integration of restaurants in area cities prior to 1963. In response to continued segregation, African Americans in Cambridge waged a sit-in at the Dizzyland Restaurant. Race Street marked one of the dividing points between between African Americans and other Americans in Cambridge, and the Dizzyland Restaurant continued its policy of refusing service to African Americans even as other establishments abandoned segregation. 1963 saw some increased tensions as counter-protesters became increasingly violent towards white and Black progressive who favored racial integration. In addition, the Cambridge police became increasingly forceful in the way they interacted with protesters. On July 10, 1963, a brutal dispute took place as protesters and counter-protesters and police clashed outside the Dizzyland restaurant. These demonstrations and the violent response of white counter-protesters led to the deployment of the Maryland National Guard. During one of the sit-ins outside the restaurant, the police drug three demonstrators from the restaurant before assaulting and arresting them.

Outside of the Dizzyland Restaurant: July 10, 1963 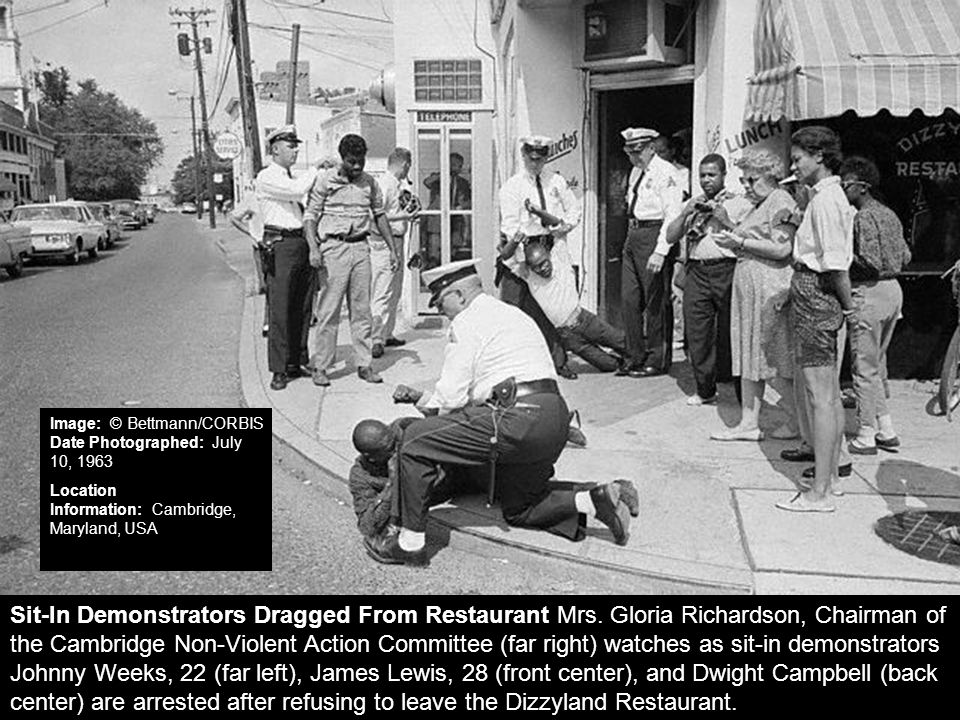 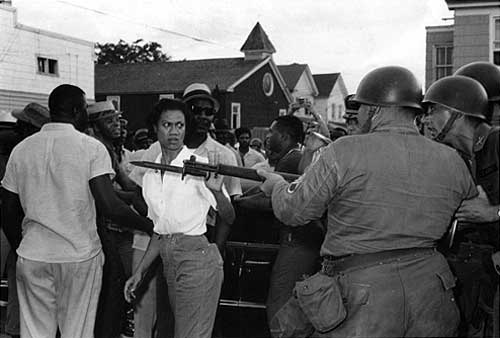 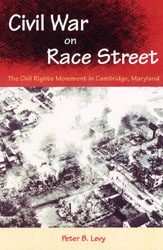 In the early 60’s, the peacefully assembled sit-ins and protests began to take a change for more violent, aggressive, and angry protests. In addition to the ever-present hatred and the reinforcement that whites were superior to Blacks, the “unemployment rates for African Americans were quadruple those of white people and segregation was pervasive in public and private spaces alike.” The tension was growing, and it was time for African Americans to initiate a permanent stand.

July 10, 1963 at Dizzyland Restaurant in Cambridge Maryland, in an already racially segregated neighborhood, a sit-in demonstration was held. It abruptly ended in the arrest of sit-in demonstrators: Johnny Weeks, James Lewis, and Dwight Campbell upon refusal to leave the Dizzyland Restaurant. Gloria Richardson was also present at the restaurant. “Cambridge resident Gloria Richardson, a recent Howard graduate, quickly became a local leader advocating more militant boycotts and sit-ins.” She paved the way for prosperity; this sit-in was one of her most recognized moments. She continued to advocate and push African Americans rights as citizens.

The following day the town exploded in violent riots. 250 Blacks were surrounded by 300 whites as they marched on to the courthouse ready to fight for their rights. Pressure mounted, until it erupted! “The town erupted into violent rioting after Black youths began throwing rocks at white-owned businesses. After shooting broke out between the opposing elements, Governor Tawes declared martial law and troops arrived in Cambridge to restore order.”

Due to the unfair and unequal expression of life, racial discrimination continued. The riots and arrests that began outside of the Dizzyland are a perfect example of the stress and strain faced by African Americans. This historical restaurant known for this particular sit-in portrays the absolute dishonorable behavior and racism we have learned throughout the Civil Rights Movement. It displayed