Dedicated in 1995 and located on each corner at the intersection of Tryon and Trade Streets in Uptown Charlotte, three of the Four Corner Statues symbolize factors that have contributed to the city's historic growth (commerce, industry, and transportation) while the fourth statue represents the future. The four statues were commissioned by an organization of Charlotte philanthropists known as the Queen's Table and designed by sculptor Raymond Kaskey of Wahington D.C.

This figure represents the future and faces three historic figures representing enterprises which have allowed Charlotte to flourish. 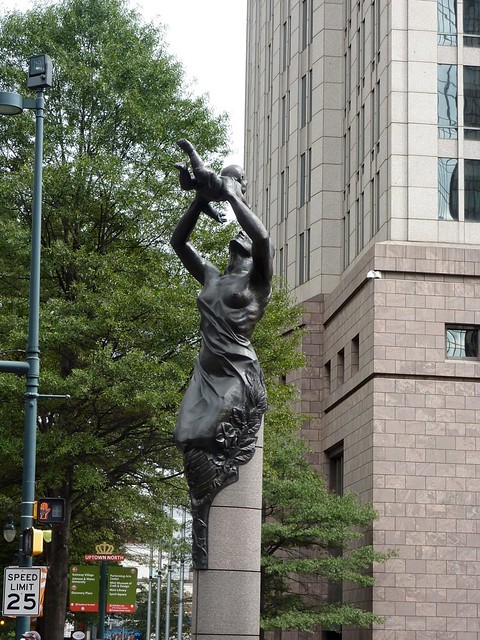 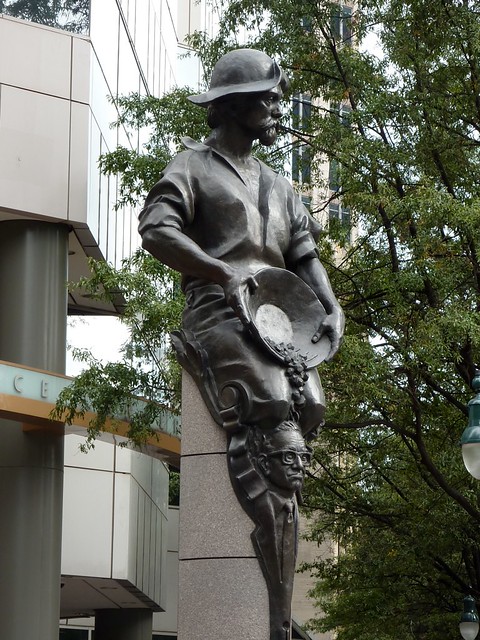 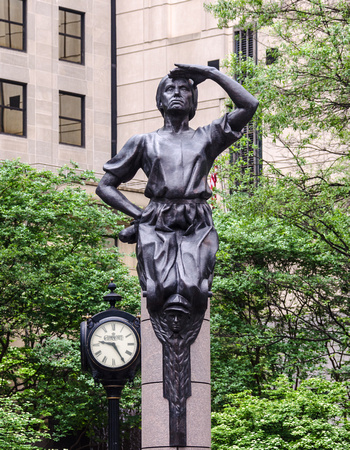 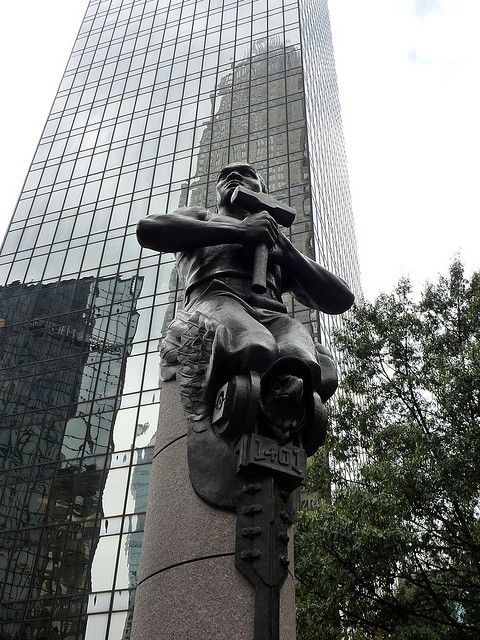 In 1993, Washington, D.C. designer and sculptor Raymond Kaskey was commissioned by a group of Charlotte philanthropists known as the Queen's Table to create a group of sculptures which reflected Charlotte's history. On November 27th, 1995 the Future, Commerce, Industry, and Transportation statues were dedicated to the city. They were placed at Independence Square, which was named so due to the reported signing of the Mecklenburg Declaration of Independence that took place in Charlotte in May of 1775. The statues are figurative representations of Charlotte's past, present, and future, and were placed at corners of Independence Square, the center of the city's Uptown area. Each of the statues have a number of attributes which communicate Charlotte's history.

The Commerce statue represents a gold prospector of the late 18th century, alluding to the North Carolina Gold Rush and the foundation of the Charlotte U.S. Mint in 1835. The prospector is depicted emptying his pan onto a head, allegedly that of Alan Greenspan, at his feet. Alan Greenspan is the former Chairman of the Federal Reserve. This pouring by the prospector symbolizes Charlotte's transition into becoming a major financial center.

The Industry statue is depicted as a female millworker with a child at her feet, symbolizing the flourishing mill industry Charlotte once had, as well as the prominent role mother-child labor played in Charlotte's economy prior to child labor laws.

The Transportation statue is depicted as an African American male with a hammer in his hands. He is portrayed as a strong character, a reference to the men who built Charlotte's rail lines and thus transformed Charlotte's economy. The number 1401 is also inscribed on the statue, alluding to a steam locomotive that used to pull trains through the city called "Charlotte."

The Future statue is represented as a mother playing with her child. In the depiction, the mother holds her child up in the air in a sort of playful embrace. North Carolina's state flower, the dogwood, is depicted at the bottom edges of the statue. Near the bottom of the statue is a hornet's nest, which is a long-standing symbol of Charlotte due to the rumored story of General Cornwallis's, a British officer in the American Revolution, connection of the symbol to the Queen City. This is a symbol Charlotte cherishes, as it references the city's tenacity and resilience in the face of adversity.

Each figure weighs approximately 5,000 pounds and is mounted on a granite column approximately 20 feet tall. Each bronze figure appears to rise out of the top of its granite column. The sculptures have been commemorated as a gift to the people of Charlotte on a plaque located behind the figure of the Future.

The University Library at the University of North Carolina at Chapel Hill, "Sculptures on the Square, Charlotte." Documenting the American South, https://docsouth.unc.edu/commland/monument/448/. Accessed 12 February 2020.