Prince Frederick's Church was constructed in 1848 and served as one of the first Episcopal churches in the region. The church served many parishioners along the Pee Dee River and was considered the worshiping center for many rice plantation owners, including Hayne Allston, Plowden West, and William Sparkman. This structure is the second church built on the property and reflects a typical Gothic church style common to the period. The church was entered into the National Register of Historic places in 1974, although only the front facade of the church remains standing today. The church remains a well hidden gem in rural Plantersville.

The front facade of Prince Frederick Church, located in Plantersville, South Carolina. The front facade is the only standing section of the church today and represents the Gothic designs of Samuel Sloan. 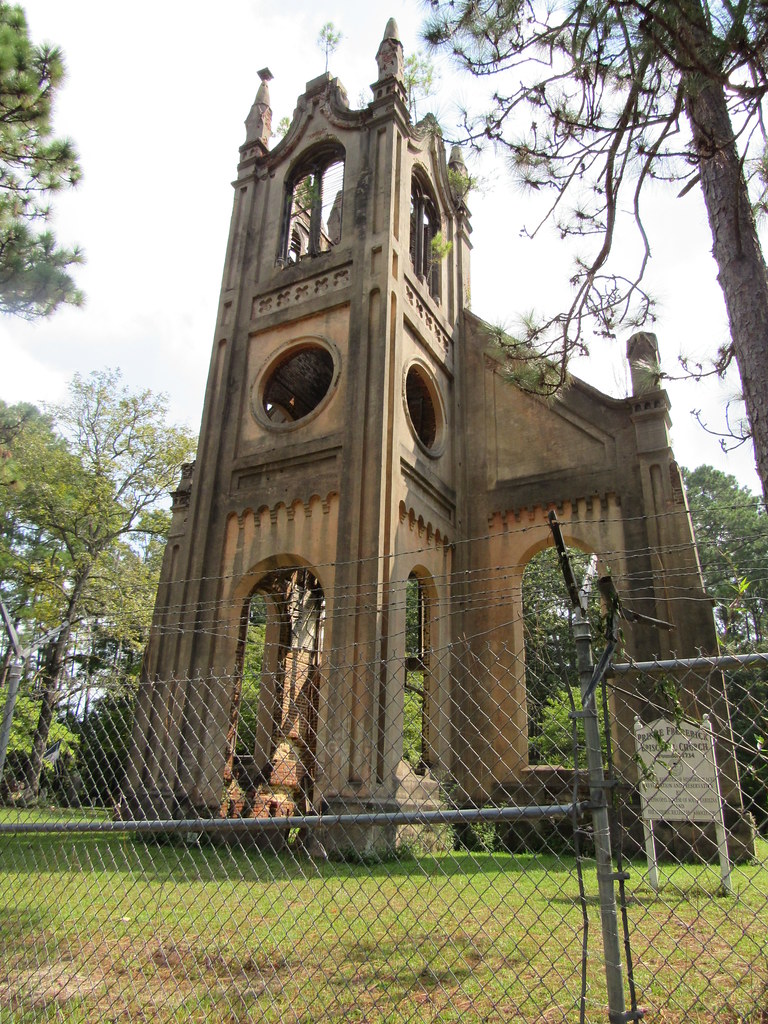 Early 19th century rice and indigo plantation communities were witness to an expansion of clerical institutions along several South Carolina river systems, due to the growth and prosperity of the local agrarian economy. One such expansion included the commission of one of the leading Episcopalian churches in Georgetown County, named Prince Frederick Chapel. In 1793 the Reverend Hugh Frazier began the necessary tasks to donate an area of approximately two acres of land to the newly established Prince Frederick Parish for what would become the primary Episcopalian house of worship in the Georgetown area, named in honor of Prince Frederick of Wales.[1] The parish was established after St. George Winyah Parish in Georgetown grew unmanageable after the decline and replacement of the indigo trade along the South Carolina coast. The land was situated along the Pee Dee River and provided easy access for travelers and parishioners who utilized boating as their primary source of transportation. The sudden rush of rice cultivation led to an influx of wealthy and influential people in the community, while simultaneously creating a need for a house of worship.

Some notable parishioners included local plantation owners, such as Plowden Weston, William Sparkman, and William (Hayne) Allston.[2] The Allston family owned many plantations along the Waccamaw and Pee Dee Rivers, including Fairfield, Clifton, and Bellefield plantations. The family’s business and property trade along the river expanded the rice economy and encouraged the growth of the community by selling property to other would-be parishioners, such as Plowden Weston. Weston owned and operated the Hagley Plantation after purchasing it from the Allston Family in 1854 and expanded his own agricultural business along the Waccamaw River, Black River, and Pee Dee River. Similarly, William Sparkman owned and operated two plantations, Cottage and Springwood, along the Black River and practiced the Episcopalian faith, while simultaneously conducting business with fellow rice planters. Although the change in property ownership was frequent, these men were highly influential and participatory members of the Prince Frederick Parish and helped establish the need and want of a chapel building committee, which was established in 1835.[3] In 1837, after two years of construction, a wooden chapel stood on the Pee Dee River property and was formally consecrated by Bishop Nathaniel Bowen of Charleston, South Carolina on April 19, 1837.[4] By 1857 the congregation of the chapel had begun to outgrow the small wooden structure and another building committee was established to begin building a larger, more suitable location.

The building committee chose to employ Louis J. Barbot for the sanctuary’s architectural design, which was heavily influenced by Saint Michael’s Church in Charleston, South Carolina. Previously, the Bishop Bowen had served as rector of Saint Michael’s Church, providing a connection between the two parishes. Barbot designed Prince Frederick’s Church utilizing an architectural design by another well-known architect, Samuel Sloan. Sloan famously authored The Model Architect in 1851, which was heavily utilized for the establishment of rectories throughout the southern region.[5] Barbot employed Sloan’s Gothic revival building style and implemented the typical features of a steeple tower, arched entranceway, narrow arched windows, arched dentils, sculptured moldings, and quatrefoil crosses to decoratively subdivide the multilevel structure.[6] The committee also selected the brothers Phillip and Edward Gunn for the construction of the rectory, while the Reverend Joseph Hunter was tasked with laying the cornerstone of the church in 1859 to begin construction. Former governor and parishioner, Robert F.W. Allston, also gave a commemorative address to honor previous parish members and their community on November 17, 1859.

Two years after construction began, the Civil War erupted and led to a shortage of supplies and materials that were essential to the church’s establishment. Many of the wealthy plantation families were responsible for funding the construction and ordering consecrated materials from Episcopalian ecclesiastical suppliers, which were halted by federal Union blockades established through the Anaconda Plan.[7] Journals of plantation owners, such as William Sparkman, have provided detailed accounts of skirmishes and battles between Union and Confederate troops along the Waccamaw River, Pee Dee River, and Black River. These accounts briefly mention the substantial damage to church construction, which resumed after the end of the war in April of 1865.

The immense loss of life, emancipation of enslaved individuals, seizure of property, and irreparable damage crippled the rice industry in its totality. The decline resulted in an extended building period for the remainder of the church and lasted until 1876 and was consecrated on March 25, 1877. Parishioners began to migrate towards the densely populated cities of Charleston, South Carolina and Wilmington, North Carolina in response to the war’s damage and Prince Frederick’s Parish saw a large decrease in congregational assemblage. As a result, the building began to fall into disrepair and funding was unavailable to maintain or make necessary repairs. Accounts of the church’s disrepair are noted as early as 1886 in the journal of Elizabeth Allston Pringle, which noted needed repairs to the structure due to storm damage and structural integrity issues.[8]

The church garnered little attention from the Plantersville community until 1966, when Georgetown County building inspectors declared it unsafe and had the main structure demolished. The only remaining portion of the structure today is the entryway and steeple of the building’s front-facing bell tower wall, as well as an adjacent graveyard with numerous 19th century gravestones. Renewed interest in local history projects by the South Carolina Department of Archives and History led a local researcher named Florence Myers, a representative of the Kathy Kelly-Waccamaw Regional Planning and Development Council, to advocate and file for the registry of the site with the National Register of Historic Places in 1974.[9]

Since its designation as a historic site, Prince Fredericks Church has become a local haven for curious visitors and historians alike. The location has also gained the nickname of “Old Gunn Church,” from many locals who cite the structures original builders and his rumored death during construction.[10] Visitors can still visit the ruins and view them behind a chain-link barrier that has been established to protect the site, as well as visitors.

[4] Thomas, A Historical Account of the Protestant Episcopal Church in South Carolina, 77-78.

[6] Samuel Sloan, The Model Architect: A Series of Original Designs for Cottages, Villas, Suburban Residences, etc., Accompanied by Explanations, Specifications, Estimates, and Elaborate Details: Prepared Expressly for the use of Projectors and Artisans Throughout the United States, 1852, pg. 88, Digitized PDF File of the Getty Institute Collection https://archive.org/details/modelarchitectse02sloa/page/2/mode/2up/search/church , Accessed February 26, 2020.

Sloan,Samuel Sloan. The Model Architect: A Series of Original Designs for Cottages, Villas, Suburban Residences, etc., Accompanied by Explanations, Specifications, Estimates, and Elaborate Details: Prepared Expressly for the use of Projectors and Artisans Throughout the United States, 1852, pg. 88, Digitized PDF File of the Getty Institute Collection https://archive.org/details/modelarchitectse02sloa/page/2/mode/2up/search/church , Accessed February 26, 2020.