The Pacific Northwest Quilt & Fiber Arts Museum is dedicated to preserving and promoting the tradition of quiltmaking and other handmade fiber arts. It was founded in 1997 by local resident Rita Hupy and is located in the historic Gaches Mansion, which was built in 1891. The museum, which is accredited by the American Alliance of Museums, houses a collection of textiles primarily from the Pacific Rim that date from the 1820s to the present. The museum offers changing exhibitions and a variety of educational programs throughout the year. The house itself is a contributing property of the La Conner Historic District, which is listed on the National Register of Historic Places.

The Pacific Northwest Quilt & Fiber Arts Museum is housed in this beautiful historic home built in 1891. 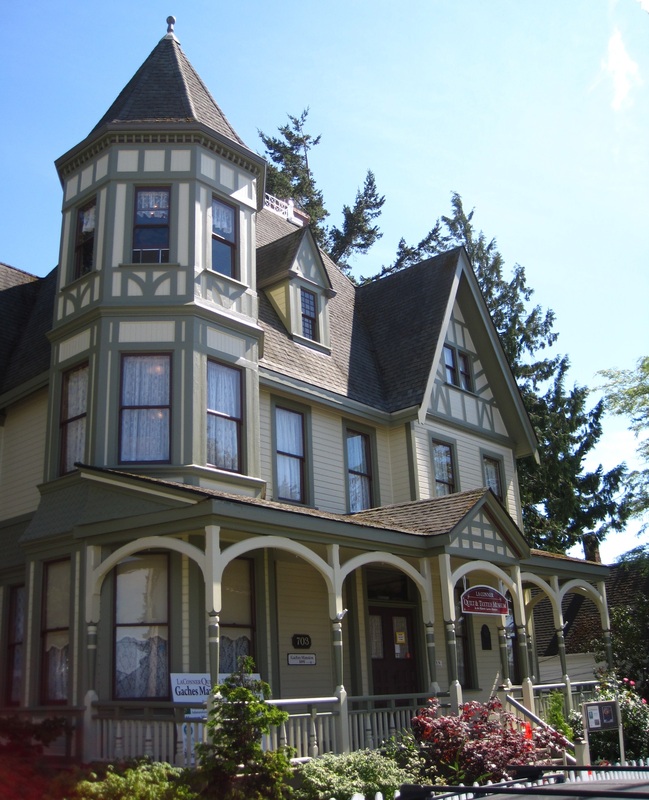 Rita Hupy, a quilter herself, wanted a space where she and other quilters could host exhibits showcasing the works of quilters from the area, the country, and around the world. They rented space on the second floor of the mansion and hosted the first exhibition in 1998. Less than a year later, the museum hosted an exhibit on Japanese quilts. In the following years the museum continued to host several exhibits per year—64 by 2005. Around that time the museum decided to buy the mansion, which the city owned at that time, and began the long process of restoring it and adding storage space. That work was finally finished in 2013.

The Gaches Mansion was built in 1891 by businessman George Gaches, who was born in England and arrived in La Conner in 1869. He operated a mercantile business with his brother James, who apparently had lived in Australia since the age of 14 before relocating here in 1873. The business was very successful and brothers became prominent figures in the area.

The mansion is a beautiful example of the Tudor architectural style. It is three-stories tall and features a "widows walk" on the roof, an octagonal tower, a large front porch, and decorative woodwork. Inside, the house originally had 20 rooms, a reception hall, and mantles above the three fireplaces, which are not used anymore. For many years the mansion was a popular place social gatherings hosted by George's wife, Louisa.

By the early 1900s, they had moved to Seattle and the mansion sat vacant for a time. A local doctor, Dr. G.E. Howe, started renting it and eventually bought it in 1905, thereby founding the county's first hospital. After Howe sold the mansion in 1909, it became a private single-family residence again until 1940 when it was converted into apartments.

This situation lasted for three decades before the third floor of old home was severely damaged in a fire in 1973. Thankfully, a group of local citizens saved the mansion from demolition. In 1981, Rita's husband, photographer Art Hupy, opened the Valley Museum of Northwest Art (now the Museum of Northwest Art) on the second floor. That museum moved to its current location and Rita opened the quilt museum in 1997.